Half the zoo is slated for redevelopment by 2022 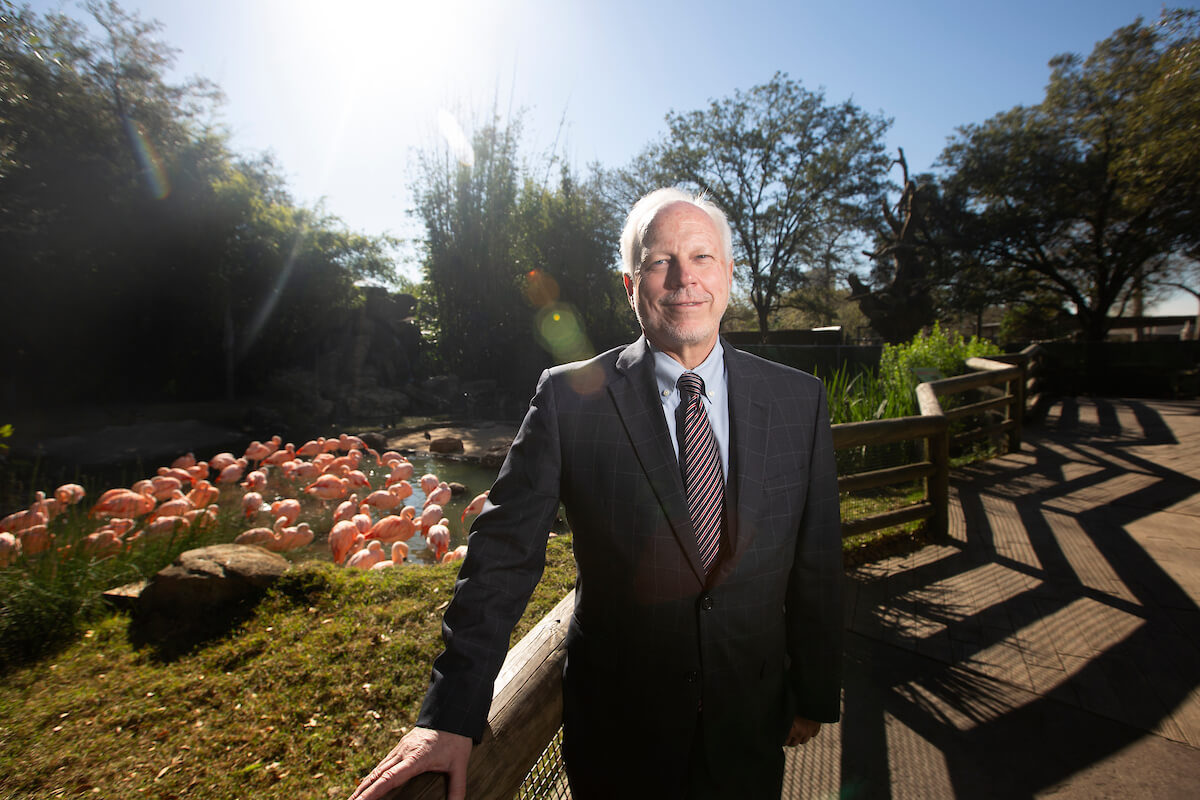 LEE EHMKE is the president and CEO of the Houston Zoo, which welcomes approximately 2.5 million visitors annually. He arrived in Houston in 2015 after leading the Minnesota Zoo and, before that, working for 12 years at the Bronx Zoo in New York. Ehmke spoke with TMC Pulse as the zoo was finalizing its Texas Wetlands exhibit, part of a major transformation in which half of the zoo will be redeveloped by its 100th anniversary in 2022.

Q | From what I’ve read about you, you seem like you’re doing exactly what you’ve wanted to do since you were a kid.
A | I think that’s absolutely accurate. There were a couple of detours along the way. But for as long as I can remember, I’ve loved animals and was interested in learning about them and going to zoos. My earliest memory in life was actually going to the zoo in Fresno, California and seeing a rhino. I was just instantly fascinated by zoos. I read every book I could find on zoos. I had supportive parents. We’d go on cross country trips all summer long to national parks and zoos in a VW van.

Q | You started your career as a lawyer and quickly pivoted to designing zoo exhibits. Why the change?
A | I was doing environmental law, which was mostly about trying to stop bad things from happening. It was rewarding, but I saw what was starting to happen in zoos. In the 1980s and 1990s, there was a movement in the zoo world to create new, natural habitats, and there was a new focus on conservation and conservation education. That was an interest of mine, and I knew there were people who did this for a living. That was the trigger for me to go back and study landscape architecture.

Q | Zoo exhibit design is a pretty niche field to study.
A | It is, and it was especially small at the time. None of the professors I studied with knew much about zoo design. There were probably 100 people in the world doing it, if that. I networked a lot. I met everyone who was doing the kind of work that inspired me. Before I even graduated from my master’s program I was offered a job at the Bronx Zoo doing exhibit design. I finished the program, drove across the country and never looked back.

Q | I read a book that described your approach to zoo exhibits as “sensitive and imaginative.” What does that mean?
A | When you’re designing exhibits in a zoo, you are really thinking about three different user groups and their needs, which aren’t necessarily the same. First and foremost are the animals. But you’re also creating spaces for guests to appreciate the animals, as well as spaces for the people who care for the animals. It’s about finding the happy medium between all three of those sets of clients. It’s also really important that all the animals be seen in the context of their natural environment. Animals taken out of that context become caricatures. People should understand that if you want these animals to survive, you need to have the environments that support them. That’s the implicit message of these natural habitat exhibits. Even if people don’t read a word at the zoo, they’re hopefully getting a sense of that.

Q | It used to be that zoos grouped animals by species, but now they’re increasingly grouped by habitat. Why are zoos making that change?
A | That’s certainly one direction zoos have taken, and we’re doing that here. It’s moving away from what’s called “taxonomic exhibitry,” which is basically an encyclopedia-style or museum style way of showing lots of similar animals together. That’s interesting, but in terms of teaching the things that are really important for people to understand—the interconnections of animals with the world, including their environment, plants, geology and water systems—it’s easier and more compelling to show it a different way.

Q | You have several projects in the works, and half the zoo is being redeveloped. What’s on the horizon?
A | We really want this zoo to embody the idea that a zoo is about saving animals in the wild. For our new exhibits, we’ve chosen places and animals that we’re already committed to helping in the wild. In some cases, we’re expanding our field conservation efforts to relate to the animals in the zoo. That becomes the storyline we’re trying to convey to people. As part of our capital campaign we launched publicly about a year ago, the first project coming along is the Texas Wetlands. We’re hoping for a public opening Memorial Day weekend. We picked three species to focus on that were, at one point or another, on their way out: the American alligator, the bald eagle and the whooping crane. All of them are in different stages of recovery. We’re trying to inspire people and show them that when people care enough, good things can happen.

Q | What else is on the way?
A | The next exhibit is called South America’s Pantanal. It’s the world’s largest inland wetland, located mostly in Brazil. It has jaguars, capybaras, tapirs, anacondas and hundreds of species of birds. We have a longstanding series of programs we’ve been supporting down there. We’re expanding our support of that and using that as the storyline of the exhibit. That will open in 2020. A third project that’s a little smaller is reconfiguring our bird exhibits to be more focused on the conservation work we’re doing with our bird collection. That will free up some space and allow us to build the signature project of the whole campaign, which will have a Galapagos Islands theme. As soon as you come in the front of the zoo, you’ll see sea lions in an edge-of-the-ocean habitat, with lava cliffs and desert landscape down to the water. There will be wave action and loud, barking sea lions. Then you’ll go into a series of exhibits that show different environments that are similar to the Galapagos Islands, featuring things like giant tortoises and iguanas, and underwater exhibits with sharks and rays.

Q | How do you see the zoo fitting in with Hermann Park and the medical center?
A | In Hermann Park’s master plan, one of the issues they’re trying to address is the congestion and parking challenges we all share. One of the solutions would be to look at some space that’s parkland on the other side of Cambridge Street and do a pedestrian overpass into the park that would lead people to the west side of the zoo. When that happens, we could rethink the west entry, and that would become more of a main gate as opposed to a secondary gate, which it is now. The whole edge of the zoo along Cambridge is something we’d like to make more inviting. Cambridge Street can be viewed as a barrier. The zoo is really, really close [to the medical center]. We’d love for people in the area to take advantage of it even more than they currently do. We’re a great refuge for the patients and families using the medical center. Every day you can see people who’ve maybe had a tough time, and coming to the zoo is such a great outlet. The proximity allows that to happen.

Q | What international work has the Houston Zoo been doing lately?
A | I just got back from Rwanda. I got to meet with several of our partners over there on gorilla conservation issues. We’ve been supporting a group in Rwanda, called the Gorilla Doctors, who are veterinarians helping to take care of the wild gorillas in national parks in Africa. Some zoos hire a lot of scientists to become the field arm of the zoo. We tend to look for people in those countries already, who are doing good work, and find ways to support them. In some ways, that support is financial, but other times it’s about setting up a website or a business plan or PR efforts. We use all the expertise of our staff. It’s not just the biologists.

Q | Are there any animals the Houston Zoo is lacking that you’d love to have?
A | I think hippos are pretty awesome. We hear that from the guests, too. We used to have a hippo, probably more than 20 years ago. But, like many animals 20 or 30 years ago, it wasn’t housed in a way that was appropriate, to be honest. Hippos are a challenge because in the wild they live in big herds. They’re not solitary animals. And although everyone thinks of hippos being underwater, the other half of their life is spent grazing. At night, they go miles from the water and eat grass, and that’s what their primary food is. How do you do a hippo exhibit that really shows the full range of their behavior in a 55-acre zoo?

Q | There’s a close connection between the zoo and the Texas Medical Center. Medical experts here provide treatment to the animals and patients often visit with the animals. How important is that relationship?
A | It’s a pretty unique relationship. We’ve worked with Baylor College of Medicine on a partnership on the elephant herpes virus, which is a major problem for elephants in zoos and somewhat in the wild. We’re now at the point that we can treat outbreaks when they do happen, which wasn’t possible five or six years ago. Our ZooMobile program takes animals and educators into the community. It’s spent some time at Ben Taub Hospital and several of the children’s hospitals to bring the zoo to people who can’t come to the zoo. It can be uplifting.

Q | The Houston Zoo is competing with social media and streaming services for people’s leisure time, yet attendance is still strong. Why do you think interest in the zoo remains robust?
A | It’s a real encounter. You’re looking into the eyes of another living being. I’ve tried VR goggles, and they’re kind of cool, but it just doesn’t compare with reality. Sure, we’re looking at how to use technology to augment and extend the zoo experience. But the reason people come is that connection with other living things.

Q | You’re 61. What do you want people to say about your impact on this zoo, or maybe the field as a whole, at your retirement party?
A | I want people to acknowledge the amazing team of people at the zoo who are super talented and dedicated to what we do here. I want people to know that, as a group, we’ve delivered on this idea that the zoo saves animals in the wild. It’s more than 450 incredible people here, plus our board, the community and our partners all over the world. I want people to see what a group of very committed people can get done. I don’t think I’ve ever been in a community that so universally loves the zoo in their city. They love it, in part, because of their memories. But I also hear constantly: “It’s improved so much.” And that will only increase.

Lee Ehmke was interviewed by TMC Communications Director Ryan Holeywell. The conversation was edited for clarity and length.