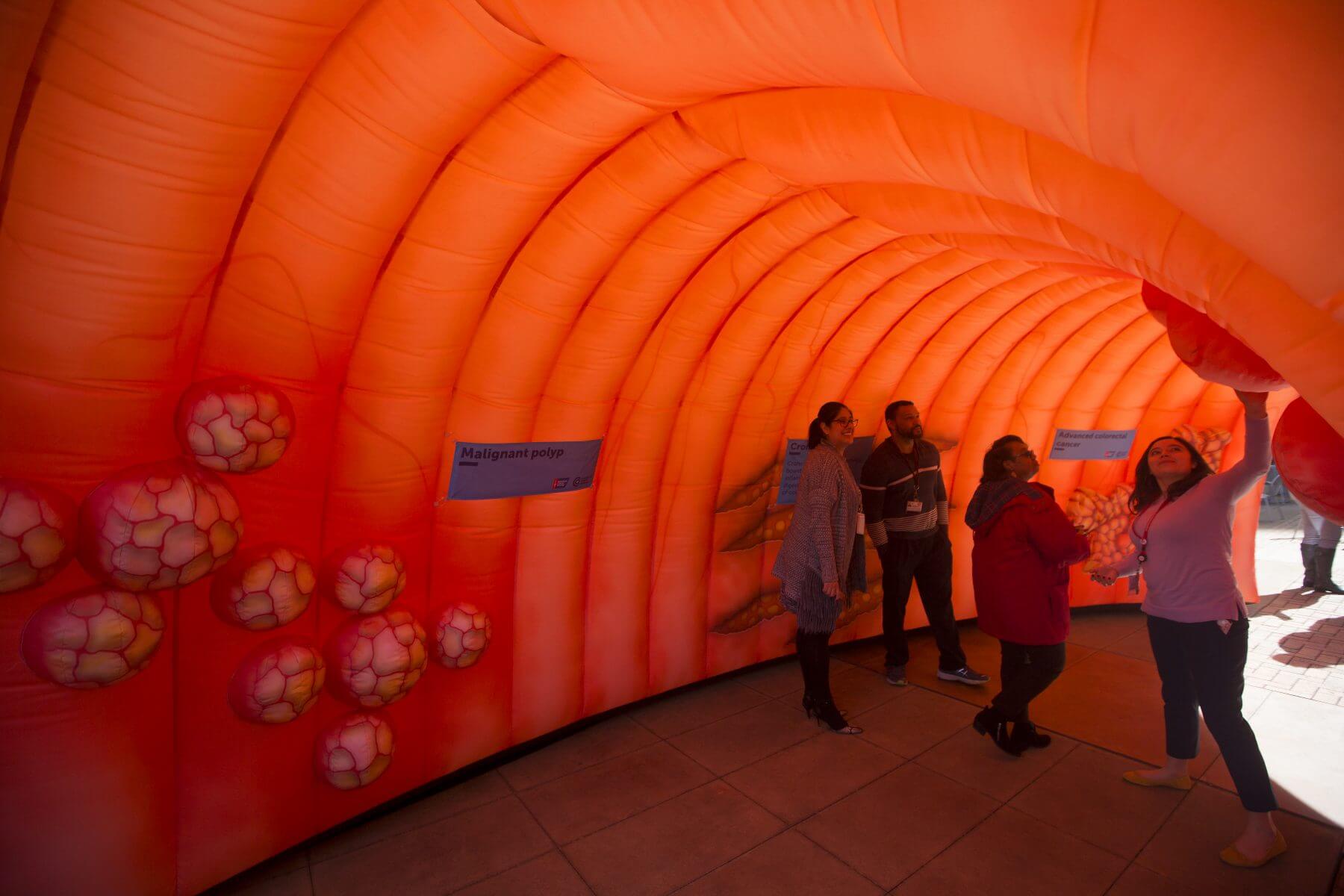 “To Bill McKeon, the doctors, nurses and patients, I want to thank you all for the work you’re doing to save a lot of lives in the city,” Turner said during a press conference at the TMC. “To the cancer survivors, … you’re not alone in your battle. We applaud your courage and your will to fight for a greater awareness, testing, treatment and research—whatever it takes to help others from being diagnosed with a preventable disease like colon cancer.

As part of a larger, national effort between the Colon Cancer Coalition nonprofit organization and Fight Colorectal Cancer advocacy group, more than 50 buildings, business and landmarks across Houston will participate in spreading colorectal cancer awareness by shining blue lights during March.

Colorectal cancer is the third most common cancer and second leading cause of cancer death in the country, according to the American Cancer Society.

“Unfortunately, this year, 4,000 of our family, neighbors, friends and Texans will die from colon cancer. Another 11,000 will be diagnosed with colon cancer this year,” said Dan D’Armond, executive director of community development at the American Cancer Society. “That’s why this month, when Houstonians see blue, think: Get screened for colon cancer and save lives.”

The event featured a giant, 20-foot inflatable colon that attendees could walk through to learn more about what normal colon tissue looks like and how the different stages of the cancer appear in the body.

“Walking through the inflatable colon gives people the shock value and a more visual display of what cancer looks like,” said Allison Rosen, who spearheaded the initiative to light Houston blue and is the lead project coordinator for the Office of Outreach and Health Disparities at Baylor’s Dan L Duncan Comprehensive Cancer Center. “People hear the word ‘cancer’ and they all know people that have gone through cancer treatment, but no one’s ever had the opportunity to see what it looks like on the inside. … Just having a visual helps reinforce the need to get screened for this disease.”

Most cases of colorectal cancer develop as polyps—abnormal growths inside the colon or rectum. If a polyp isn’t properly removed, it can become cancerous. Early detection through colonoscopies can greatly reduce the risk of cancer.

Certain lifestyle habits—such as unhealthy eating, physical inactivity, smoking and alcohol use—can increase a person’s risk of colorectal cancer. However, other risk factors include race and ethnicity. African Americans have the highest mortality rate from colorectal cancer compared to other racial and ethnic groups in the country.

People with a history of inflammatory bowel disease—such as ulcerative colitis or Crohn’s disease—also have an increased risk of colorectal cancer.

Such was the case for Rosen, a colorectal cancer survivor who had struggled with Crohn’s disease since she was 12 years old.

At the age of 32, Rosen was diagnosed with stage 2C colorectal cancer. Prior to her diagnosis, she had been experiencing symptoms including fatigue, weight loss, bloody stool and cramps.

Her doctor suspected that a food blockage was causing the issues and recommended she drink magnesium citrate, a saline laxative, to clear it out, but her symptoms persisted. After an annual routine colonoscopy in 2012, Rosen was diagnosed with cancer. Her “blockage” was a 13-centimeter malignant tumor in her colon.

Rosen pursued treatment at The University of Texas MD Anderson Cancer Center, where she underwent five and a half weeks of chemotherapy and radiation and three surgeries, including one to remove her entire colon. She now lives with a permanent ileostomy pouch. Having an external bag to help drain the waste was certainly a lifestyle change, but “it gave me my life back,” she said.

Since then, Rosen has dedicated her career to educating the public about colorectal cancer. She inspires others to get screened early through her work at Baylor, as well as her volunteer work with the Colon Cancer Coalition.

“Ultimately, six years and I’m cancer free, and I couldn’t be happier,” Rosen said. “Now that I’m in remission, I want to give back to the community and help others so that they don’t have to go through what I went through. … If I had been screened earlier I might have been able to have a polyp that turns into cancer removed, and I would not have had to have gone through cancer treatment. I think people get stuck with the idea that a colonoscopy is the worst thing in the world. Well, let me just tell you, cancer treatment’s a lot worse.”