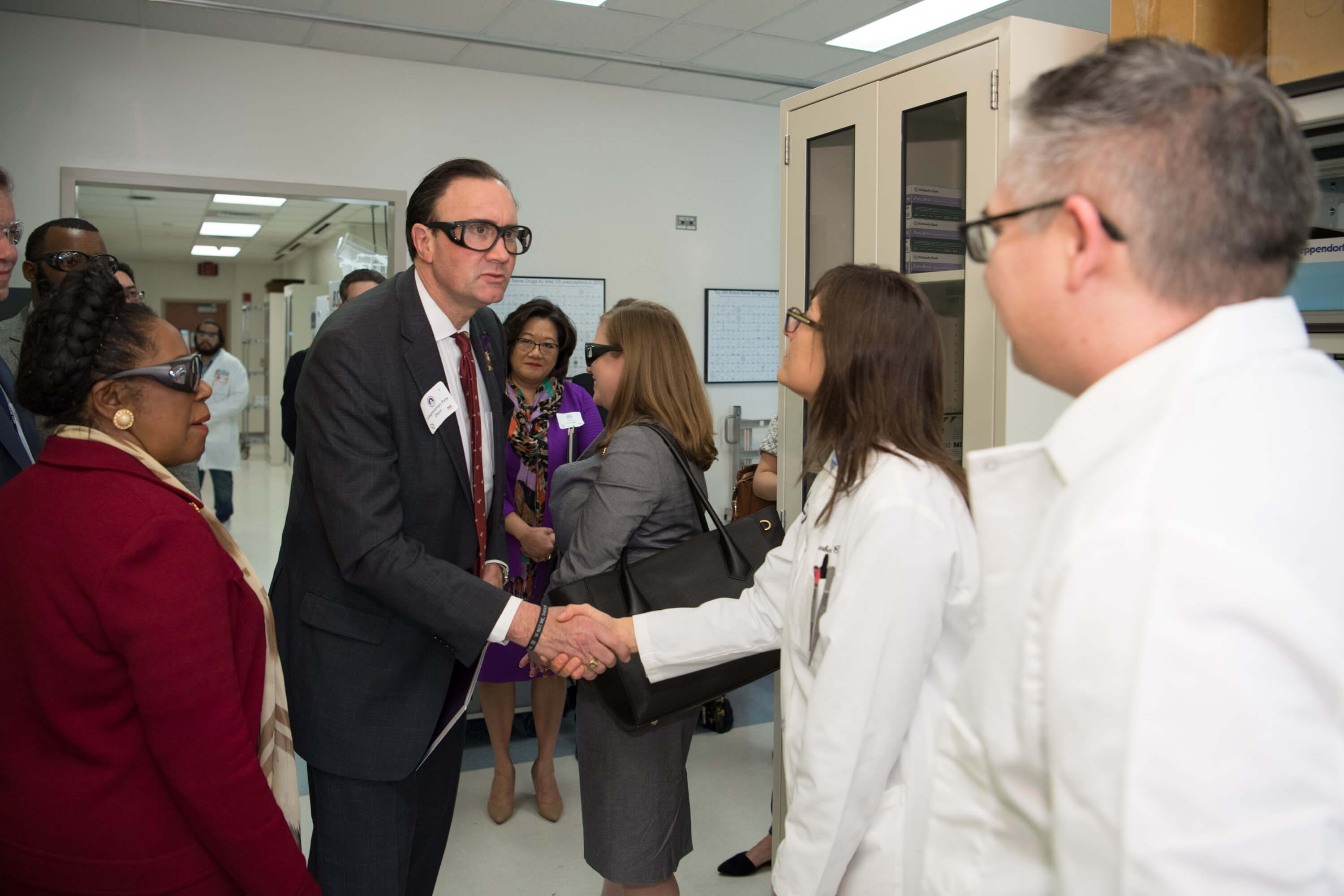 Texas Congressional members from the Houston area visited the Texas Medical Center this month for the third annual Alzheimer’s Research Congressional Update hosted by the Neurodegeneration Consortium at The University of Texas MD Anderson Cancer Center in partnership with the Alzheimer’s Association Houston & Southeast Texas Chapter.

“On issues such as these, we’re not Republicans and we’re not Democrats; we’re not conservatives and we’re not liberals,” Green said at the March 22 symposium. “We are the United States congresspersons on these issues. … We have to stand together to make a difference so that the needs that have been called to our attention can be adequately met and we can deal with this devastating disease.”

Someone in the United States develops Alzheimer’s every 65 seconds.

Nearly 6 million Americans are living with the disease, which is the nation’s sixth leading cause of death, according to data from the national Alzheimer’s Association’s 2019 Facts and Figures report.

In Texas, the number of deaths attributed to Alzheimer’s have increased 200 percent since 2000, said Julie Kutac, Ph.D., research specialist at the Alzheimer’s Association Houston & Southeast Texas Chapter. There are currently about 390,000 Texans living with the disease and that number is estimated to increase by 100,000 to nearly a half million by 2025.

The prevalence of the disease places a heavy economic burden on the country. Alzheimer’s and other dementia conditions are expected to cost the United States $290 billion this year alone and—without medical breakthroughs to prevent, slow or treat the disease—could increase to $1.1 trillion by 2050.

“It is critical that Alzheimer’s and other dementia research continues to accelerate and MD Anderson is one of the organizations focused on that task right here in the Texas Medical Center,” Kutac said.

How cancer research connects to Alzheimer’s

While many people may wonder why a cancer center has forged an interest in Alzheimer’s disease, researchers at the consortium are currently studying the parallels between Alzheimer’s and chemotherapy-induced neurodegeneration, commonly referred to as “chemobrain.” Studies of breast cancer survivors showed that 17 to 75 percent of women who receive chemotherapy experience cognitive impairments—including attention, concentrating, planning and working memory—six months to 20 years after their treatment, according to the American Cancer Society.

“When that happens, it can be very devastating. Some of them lose their ability to engage in conversations or to engage in critical thinking. Some of them are no longer able to operate businesses or to go back to the line of work they were in before,” said Peter Pisters, M.D., president of MD Anderson. “It behooves us for the benefit of cancer patients to engage in research that is designed to understand the mechanisms of those changes. Obviously, those mechanisms, causes and epidemiology behind that may also play into the unique biology of the evolution of Alzheimer’s disease.”

Thanks to a $25 million gift from the Belfer Family Foundation, MD Anderson established the Neurodegeneration Consortium in 2011 to study the biology of Alzheimer’s disease and translate scientific discovery into meaningful therapeutics that can delay, reserve or eliminate the disease. The multidisciplinary consortium brings together scientists from MD Anderson’s Institute for Applied Cancer Science, Baylor College of Medicine and the Massachusetts Institute of Technology who are making a concerted effort to develop a therapeutic for Alzheimer’s.

“There’s almost 120,000 publications in the field of Alzheimer’s disease. There’s a lot to learn, a lot to know,” said Jim Ray, Ph.D., director of the Neurodegeneration Consortium at MD Anderson. “But despite dozens of drug candidates being tested, hundreds of clinical trials involving tens of thousands of patient volunteers and billions of dollars, we don’t have a therapy. How can we have 120,000 papers on a topic and none of the information has led to a therapy to slow the disease?”

The Congressional Update comes on the heels of news of another failed Alzheimer’s drug. Biogen and Japanese pharmaceutical company Eisai announced last week that they decided to halt two Phase 3 clinical trials of aducanumab, a drug that was touted to slow Alzheimer’s by targeting beta-amyloids in the brain.

Amyloids long have been known to be involved in Alzheimer’s and were once widely theorized as an Alzheimer’s cause, but the quest to develop an anti-amyloid therapeutic has been riddled with failures. The last successful drug to treat dementia associated with Alzheimer’s, Namenda, was approved on Aug. 16, 2003—nearly 16 years ago.

“We’ve learned nothing new. There have already been so many failures in anti-amyloid therapies. Another one makes no difference. But the surprising thing to me isn’t that this drug failed, it’s that it ever looked promising at all,” Ray said. “All the theories of why it was different don’t really advance us any further. That line of research can stop and we can focus on other things.”

Despite the news of aducanumab’s failure, the Congressional Update highlighted the strides scientists are making in Alzheimer’s research and emphasized the need for federal funding.

“The seminar was incredibly helpful in bringing us current on the state of research, where things are and how important it is to continue the congressional funding for research, as well as how much of an impact that funding really has because, obviously, that’s directed at us,” said Fletcher, who’s paternal grandparents succumbed to Alzheimer’s. “To see the breakthroughs in the research—to see the possibilities—is a really good source of hope. … We’re in that season now of appropriations … so it’s important to know how important it is.”