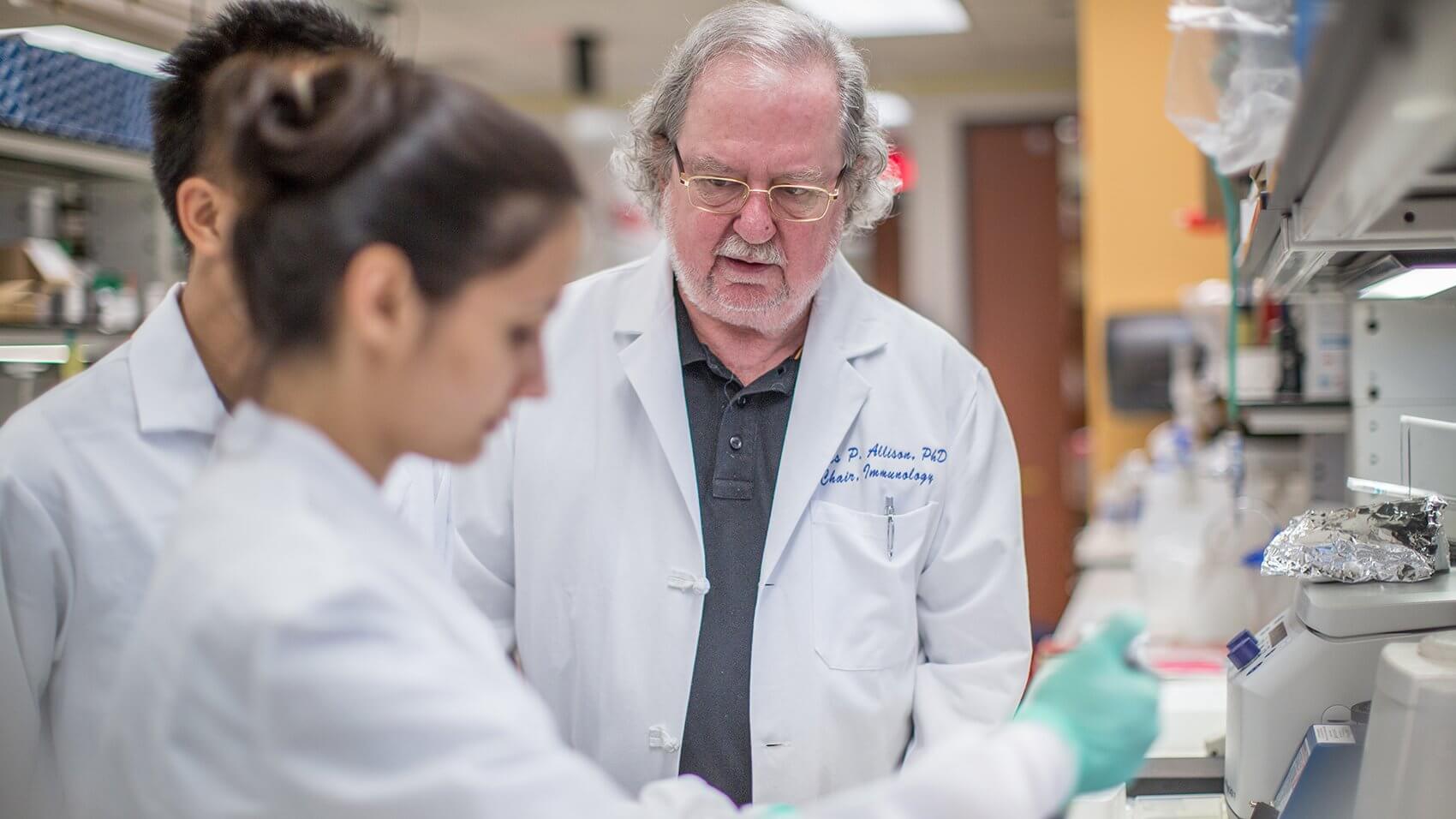 The most compelling image sequences in the Breakthrough documentary, which premiered March 9 at South by Southwest, are the seconds when the face of immunologist James Allison, Ph.D., fills the frame amid superimposed images and film of his loved ones lost to cancer.

Allison, 70, was awarded the 2018 Nobel Prize in Physiology or Medicine jointly with Japanese immunologist Tasuku Honjo, M.D., Ph.D., for the discovery of cancer therapies that stimulate the immune system to attack tumor cells. Treatments developed from Allison’s work have extended the lives of thousands of people with advanced disease, though certain cancers have responded better to immunotherapy than others.

Breakthrough, directed by Bill Haney, follows Allison’s professional and personal journey over several decades. The film’s world premiere at South by Southwest (SXSW) brought Houston innovators to the epicenter of a festival celebrating the ways people push the limits of creativity and progress through film, music and interactive media.

Meet Jim Allison, winner of the 2018 Nobel Prize in Medicine, a stubborn man on a visionary quest to find a cure for cancer. #BreakthroughDoc makes its world premiere at #SXSW on March 9. www.breakthroughdoc.com

The film opens with a shot of downtown Alice, Texas, where Allison was raised by a father he describes as a “country doctor” and his doting mother, who died of lymphoma when he was 11. The soundtrack for that first scene is the scientist playing a melancholy tune on the harmonica.

With a pained voice all these decades later, Allison describes how his mother spent a lot of time in bed and how he remembers burns on her neck, which he later learned were the consequence of radiation.

Today, Allison is a researcher at The University of Texas MD Anderson Cancer Center who is fighting a third personal bout with cancer following a melanoma removal from his nose a few years ago.

The film is narrated by Midland-born Woody Harrelson, with music by the legendary Willie Nelson, who hails from a town north of Waco called Abbott, to create a “holy trinity of Texas,” Haney said.

Subtitled “This is What a Hero Looks Like,” the documentary tells a deeply Texan story laced with the Lone Star State’s culture, institutions, characters, places and music—namely country and blues. Allison earned his degrees from The University of Texas at Austin and honed his fascination with understanding how T cells operate in the immune system at an MD Anderson science park in Smithville. The mutual admiration between Nelson and Allison culminates in one of the final scenes of the film as the immunologist stands onstage with the outlaw country artist at Austin City Limits and plays “Roll Me Up and Smoke Me When I Die” on the harmonica.

Allison discovered a way to block a protein on T cells that acts as a brake, thus freeing T cells to attack cancer. Specifically, he developed an antibody to block the checkpoint protein CTLA-4.The film’s ongoing threads weave through his work hard-play hard drama by revealing Allison’s confidence and doggedness. Those traits fueled his determination to unravel the mysteries of T cells and create a new tool to attack cancer, without the consequences associated with chemotherapy, radiation and surgery.

The film climaxes with Allison’s move from California to New York City to personally keep the research fire stoked. He had champions, such as medical oncologist Rachel Humphrey, M.D. She took the lead in convincing Bristol-Myers Squibb to invest millions into what became ipilimumab, a checkpoint inhibitor drug known as Yervoy that worked even though tumors got larger before they shrank. The company also settled on a different gauge for success—survival over time instead of early tumor shrinkage as the measure of the drug’s effectiveness. Clinical trials were complete in 2011 and the the drug was approved that year by the U.S. Food and Drug Administration.

Most of the people who appear in the film—Allison’s current wife and research collaborator, MD Anderson oncologist Padmanee “Pam” Sharma, M.D., Ph.D.; his former wife, Malinda Allison, who was married to him for two decades while he chased his dream of understanding T cells; Sharon Belvin, who received his immunotherapy treatment in a trial, became, in 2006, the first patient that he met and remains cancer-free to this day; as well as fellow researchers, Bristol-Myers Squibb executives and his college professor—were in the audience at the premiere and sprang to their feet when asked to stand. 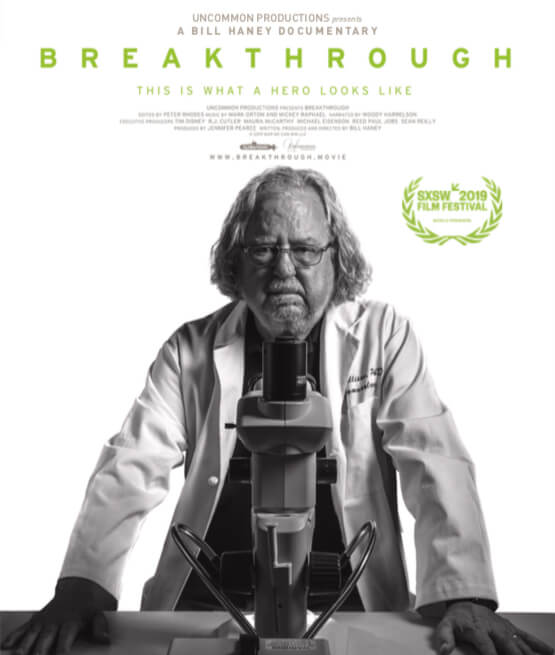 Immunotherapy story is not finished

In a Q&A with the audience after the hourlong film, Haney explained his interest in telling this story and finding a standout in the “immuno-oncology revolution” who could lead a documentary.

“There was only one person,” Haney said. “In a world where imaginative work is often thought of as being done by folks like me—filmmakers, poets, painters, sculptors, actors—I wanted to focus on the extraordinary creative work of scientists.”

He also wanted to show that there are compelling characters committed to solving the world’s biggest challenges.

“Jim and the extraordinary people—a number of whom are here today—have shown us exactly what a team of gifted folks led by an inspiring, empathetic, extraordinary leader with a real sense of imaginative purpose can do if they work collaboratively, if they use real facts to form conclusions, they test, if they share their information, if they partner with a bigger community. Look what science has done. These problems aren’t insurmountable; they just have to be surmounted by thoughtful, purposeful people focused on things bigger than themselves.”

Allison, who is the chair of immunology at MD Anderson and the cancer center’s first Nobel laureate, said he was overwhelmed to see so many of his years of research compressed into a film.

“It was 15 years-plus of being frustrated,” he said. “Luckily, there were a lot of people who worked with me and kept the lights on.”

He also emphasized that the immunotherapy story is not finished.

“We’ve got a lot of work to do to figure out how to bring it to everybody,” Allison said. “It’s a journey in progress.”