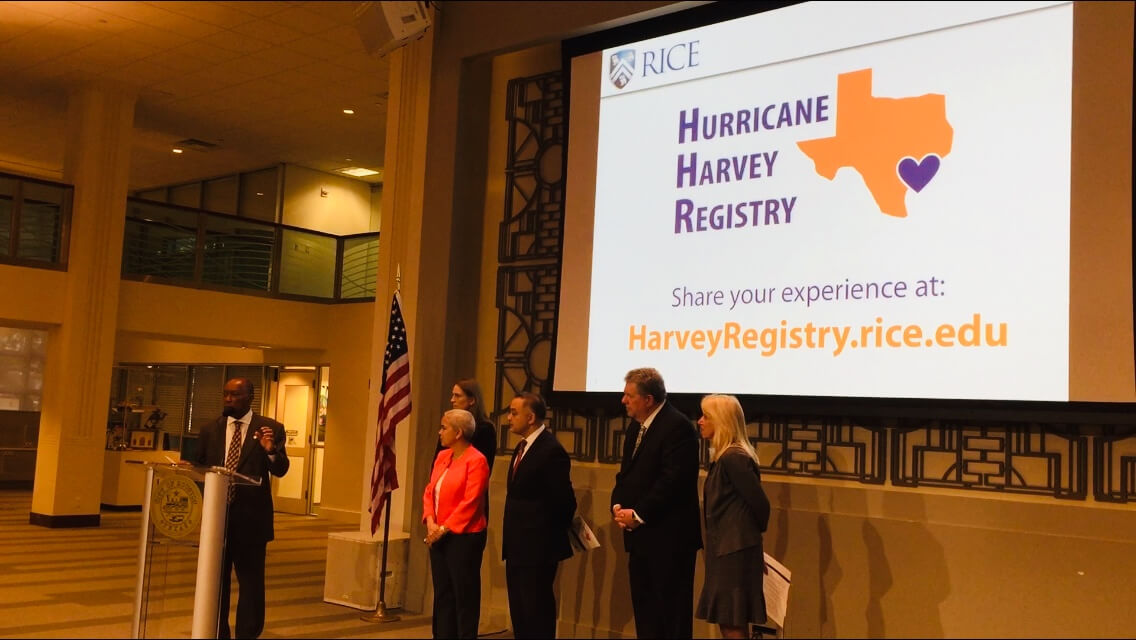 Mental health issues remain the most persistent consequence of Hurricane Harvey, according to a first-of-its-kind registry of storm survivors who experienced the unprecedented deluge in August 2017.

The Hurricane Harvey Registry, launched in April, is the nation’s first effort to track and understand the long-term impacts of a major flooding event—namely health effects. Respondents can visit HarveyRegistry.rice.edu to take the 10-minute survey in English or Spanish.

The initial findings, based on 9,800 people who responded to the survey by Jan. 2, were detailed in a 17-page report distributed this week during a news conference at Houston City Hall led by Mayor Sylvester Turner and regional health officials.

“The Harvey registry is very important. … We need the information. We need the data. This will help to drive and focus our recovery,” Turner said. “A part of that preparedness … is mining the information to where we will have the data so we will be in a much better position to be ready for the next storm when it comes—and we know it will come.”

Click here to visit HarveyRegistry.rice.edu and take the 10-minute survey in English or Spanish.

The World Trade Center Health Registry wasn’t established until two years after the Sept. 11, 2001 terrorist attack and nothing similar measured health and housing effects for Hurricane Katrina, the powerful storm that hit the Gulf Coast in 2005. The Harvey registry is funded by the Environmental Defense Fund, The Cullen Trust for Health Care and the National Institutes of Health.

“We’ve lost the opportunity to learn from Katrina,” said Rice University Provost Marie Lynn Miranda, Ph.D., lead investigator for the Harvey registry and founding director of the Children’s Environmental Health Initiative at Rice. “This is actually one of the reasons why the National Institutes of Health was willing to support it … and make sure we learned as much as we could from this storm.”

At the news conference on Feb. 21, Miranda said the survey currently has more than 13,600 registrants. The new goal is 25,000 registrants with a future benchmark of 50,000 people.

Mental health distress was reported at a higher frequency than physical ailments in the first cohort of respondents. More than half reported thinking about the storm inadvertently, getting upset when remembering Harvey, seeing images in their minds and having waves of strong feelings. The report also said one in four Houston homes sustained floodwater damage or destruction and that many residents are still recovering 18 months later. 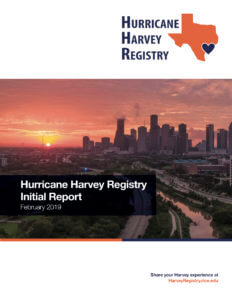 Loren Raun, Ph.D., chief environmental science officer at the Houston Health Department and a Rice assistant research professor, said her agency is using the information to connect people to services including mold remediation. She also has a project evaluating Harvey’s impact on childhood asthma.

“We know Hurricane Harvey exposed Houstonians to increased air pollution, water pollution and soil contamination as well as mold inside their homes—among other threats. But, until the Hurricane Harvey registry, we didn’t have data on what people felt and what, if any, health effects they experienced before, during and after the storm. Now we do,” she said.

The storm survey will remain open to new participants for the next several years.

“We absolutely need to get as many people as possible registered,” said Miranda, an environmental health expert. “We’re so grateful to all the people who have already joined the registry. We are grateful to all of you for anything that you might do to encourage people to join the registry and be part of providing a set of tailored solutions for the people who are affected by the hurricane … and providing a set of plans for how we prepare ourselves better in the future.”

The Hurricane Harvey Registry is a collaboration between Rice, the Environmental Defense Fund and health departments in Houston, Harris County, Fort Bend County, Chambers County and Montgomery County as well as the Victoria City-County Office of Emergency Management.