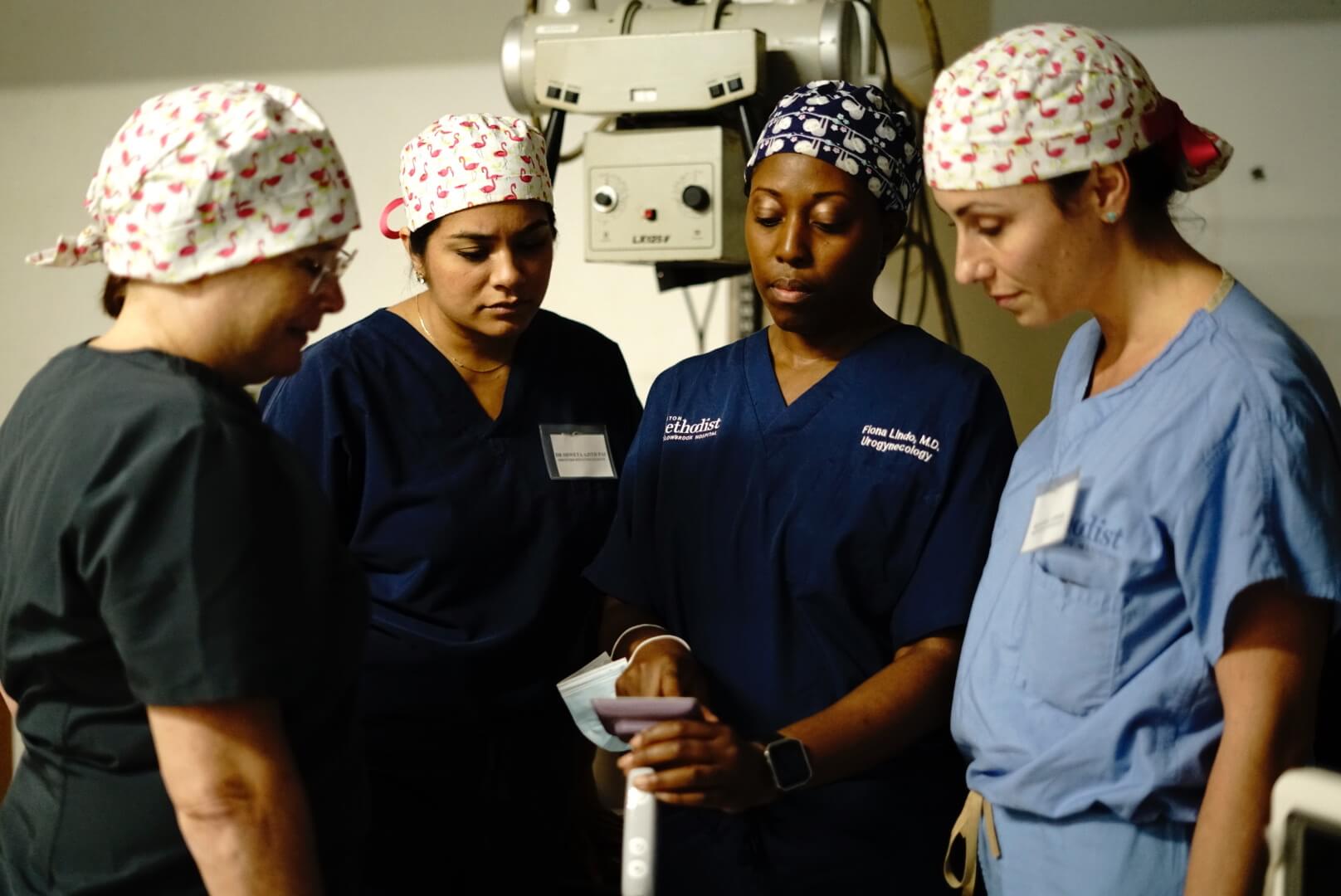 “I think it’s so important to be able to open people’s eyes to the state of healthcare on a global scale rather than ‘this is what we offer in the world’s largest medical center,’” said Tristi Muir, M.D., professor and the chairwoman of the Houston Methodist Hospital obstetrics and gynecology department. “It helps you to broaden the perspective. Also, it gives you another view on thinking about healthcare resources and how we use them in this country and how you can be innovative when you’re in a country with fewer resources.”

These disorders are common in women, with approximately 24 percent of women in the United States affected with at least one pelvic floor disorder. These conditions can be successfully treated with physical therapy, medication and surgery. However, women in Haiti—the poorest country in the Western Hemisphere—don’t have access to these therapies, go without treatment and suffer deteriorating quality of life.

Muir initially visited Pignon, a commune of about 30,000 people nestled in the northern valley of Haiti, in May 2016 with Keith Reeves, M.D., emeritus professor of obstetrics and gynecology at Houston Methodist. Both trips—in 2016 and 2018—were funded by Houston lawyer Derek Potts through the Potts Family Foundation. Potts, whose father was an ear, nose and throat physician, is one of the leading attorneys in transvaginal mesh litigation.

Although their base in Haiti—Hospital Bienfaisance de Pignon—is a modernized, 65-bed facility equipped with two operating rooms, a laboratory, endoscopy, x-ray machine and pharmacy, resources were still limited. The team packed 50 pairs of medical gloves, 40 surgical gowns, Foley catheters, IV fluids, needles and a portable cystoscope to examine a patient’s bladder via the urethra using an endoscope—all into 15 pieces of luggage.

“I utilized our hospital to get supplies and started collecting things that [the hospital] didn’t use that hadn’t expired—everything we could think of so we could actually provide care for these women,” said Lindo, whose experience running national mobile clinics helped prepare the team for their trip to Haiti.

“It was actually the same equipment that we use in the operating room here,” Muir added. “We were able to take all of that with us, but if we had not done that, I think we would’ve been hard-pressed to be able to do anything.”

The team–which consisted of Muir; Lindo; Danielle Antosh, M.D., director of the Center for Restorative Pelvic Medicine at Houston Methodist; and fellow Shweta Pai, M.D.–flew out of Florida’s Fort Lauderdale-Hollywood International Airport on Oct. 29, 2018, to Toussaint Louveture International Airport near Port-au-Prince, Haiti’s capital. The travelers split into two groups, then squeezed into smaller, five-seater planes for the 87-mile trip to Pignon.

“We couldn’t even take all of our luggage with us on the plane. We ended up getting ground transportation—eight hours from Port-au-Prince to Pignon to get the rest of our supplies. The weight was too heavy. We had too many supplies to make it fit all on the plane,” Lindo said.

When the doctors finally arrived at the hospital in Pignon, they discovered that were no antibiotics or anesthesia, but found the medication after calling around to hospitals which were a half-day to a full-day drive away.

“We had to pay for and procure that over the course of about 24 hours,” Muir said. “It’s definitely a very different set up than what we’re used to, where everything’s at our fingertips.”

Finally, their operating room was ready and identified patients were waiting at the clinic.

One of the first patients the team treated was a 37-year-old woman who had developed a 3.5-cm cyst around her urethra, causing excruciating pain during urination and intercourse. Another patient, a 34-year-old woman, had suffered a severe straddle injury that had become infected after two months and damaged her sphincter muscle. As a result, she was unable to control feces from leaking out.

Because there are no urogynecologists in Haiti who specialize in this type of treatment for pelvic floor disorders, many women in the country endure discomfort and even embarrassment.

Over the course of their four days in Pignon, the Houston Methodist doctors evaluated 13 patients and performed six surgeries that vastly improved the women’s quality of life.

“Every time I take care of a patient and I see the joy on their face because they don’t have a problem anymore, it continues to push me to continue to offer care,” Lindo said. “It takes a lot of time to do these trips, but the fact of the matter is, women here in Houston have access to physicians who can help them, but there are a lot of women in a lot of places in the world who don’t have access to care because they don’t have the available specialty to take care of them.”

In addition to the medical care they provided, another key component of the medical mission trip was educational outreach. The doctors worked alongside local surgeons to train them on the procedures and delivered lectures on topics including urinary incontinence, fecal incontinence and pelvic organ prolapse to medical residents from Port-au-Prince.

“The most poignant part [of the trip] is creating the relationships with the physicians there in Haiti, and being able to, by establishing those relationships, reach more and more women in the future,” Muir said. “That was probably, to me, the No. 1 accomplishment.”

The team landed in Houston on Nov. 2, 2018, but have already committed to returning to Pignon.

“The success of this trip will be the fact that we’ll be going back,” Lindo said. “Once you plant a seed, you have to go back to water it so it can grow.”