NASA-inspired device will help seniors, athletes and others 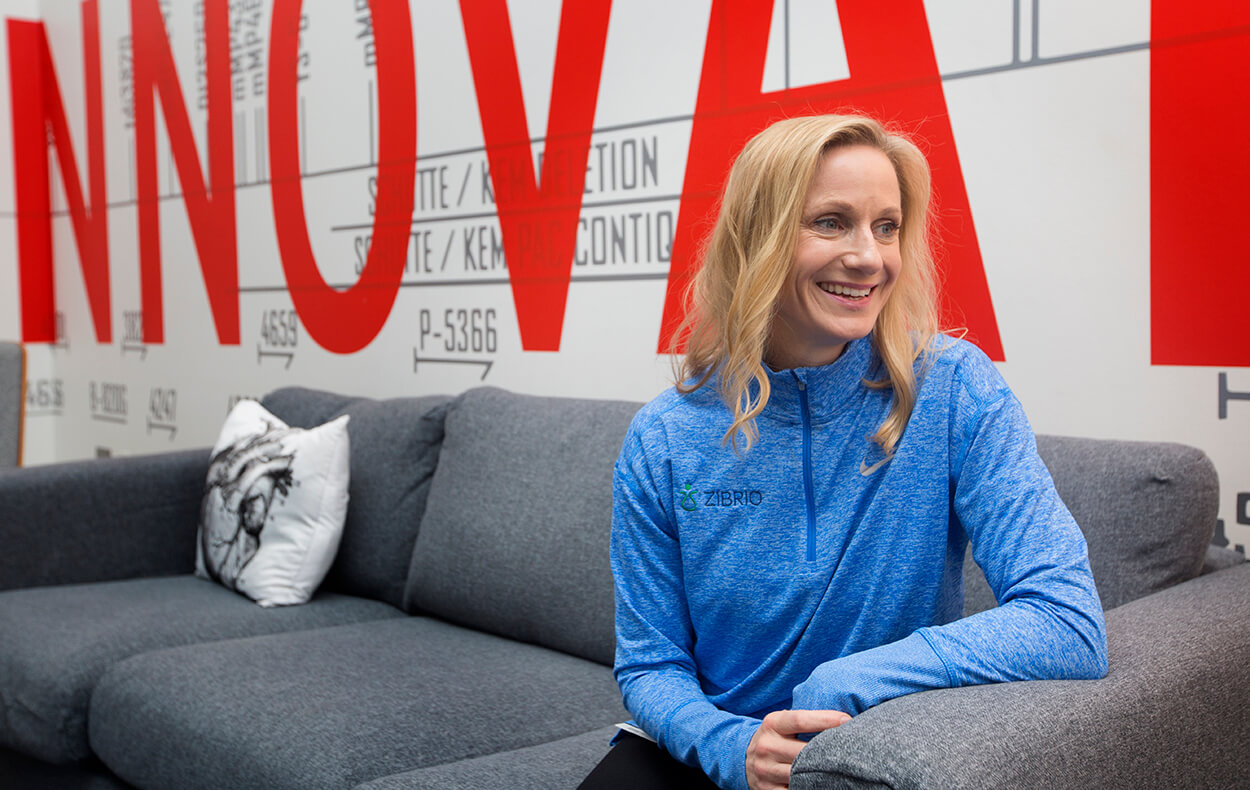 Neuroscientist and Zibrio CEO Katharine Forth, Ph.D., 43, spoke with TMC News about her professional career as a neuroscientist and entrepreneur, her athletic career as an elite Ultimate Frisbee player and how those two worlds collide in her role as an innovator.

Zibrio was selected as a finalist for the 2019 SXSW Pitch competition in the health and wearable category.

Shanley Pierce | Zibrio is a balance diagnostic company that was borne out of work you and Erez Lieberman Aiden did at NASA when you were a postdoctoral fellow. The two of you later went on to co-found the company in 2015. Tell me more about that.

Katharine Forth | As we were trying to create ways to explain posture stability—the way somebody balances themselves, the control mechanism—we were testing astronauts when they came back from microgravity to learn about their recovery from that.

There was the idea in the political plan to go to the moon and have a lunar base for any Martian expeditions. The testing equipment that we had was the size of a phone booth—really large—and we were trying to come up with a way that we could squash it down into a moon boot. In doing so, we created a very powerful algorithm that gave us a lot of insight—really cutting-edge ways to explain posturography (a method of quantifying balance).

Pierce | Where did this idea to test balance come from?

Forth | I had a grandmother who had fallen. She was, I think, 86 when she fell from stairs in Britain, treacherous stairs, in the dark—and she did break her hip and her wrist. She did live to 100, but she was in a nursing home at that point. She had a walker; she would pick it up and carry it, but still, she wasn’t the same at all.

The same sort of thing happened to Erez, too, with his grandmother. We emotionally knew the problem very deeply.

Normally, when people test balance, you have to close your eyes, stand on one leg—do all sorts of different, challenging things which requires a clinician to be there or a harness or all sorts of other things to keep somebody safe. When we realized we had invented something that was so powerful algorithmically that you can just stand with your eyes open, we realized it could help a lot of people here on Earth.

It was at lunch time at NASA. We’re sitting there. We realized we’ve got this discovery that could help a lot of people. … We literally stood up, and that’s when we decided to do something about it.

Pierce | How does this algorithm work?

Forth | We have somebody standing on the scale with their eyes open for 60 seconds. We’re measuring the pressure under their feet, so you’re really measuring these little micro movements that people make because you can never stand completely still. With those little micro movements, we apply artificial intelligence to understand the patterns of stability and instability and, from that, we’ve realized that we are predictive of whether somebody’s going to fall.

We put all of the variables—all of the metrics—into an easy-to-understand scale which is one to 10. Ten is the best. If you score one, two or three, that means you’re at high risk for falling. If you score four, five or six, that’s a moderate risk. If you’re seven and above, then you’re green and in the clear. That doesn’t mean you’re not going to fall, because accidents happen, but it means your probability is a lot lower.

Pierce | You have an app that connects to the scale. What kind of information does the app provide?

Forth | This helps to identify what’s going on in the person’s life that’s contributing positively and negatively to their balance, because there are so many different things. It could be your sleep. It could be your diet. It could be exercise. Loads of things.

We help to tease those apart so that we can then provide guidance about what they should continue doing and what they should seek out. Should they be speaking to a doctor about something? It really helps to refine the user as to how to have the next conversation because if it’s a whole load of 20 different variables, then nobody knows what to do.

Pierce | Obviously, there’s a huge benefit for seniors, but is there an advantage with this for athletes? You’re an athlete. Can you walk me through how your product and your company could also help this population?

Forth | This is one way to enhance performance to make sure athletes are right at the top of their game. As an athlete, you’re always trying to squeeze out a couple percent because it’s so hard to differentiate yourself from other athletes. It’s not the complete puzzle, but it’s a piece of an athlete’s puzzle.

Pierce | You’re also an elite Ultimate Frisbee player. How have your two worlds—athletics and science—intersected?

Forth | It started right from the beginning because I was a competitive gymnast. I have a very strong internal knowledge of balance, how to train for balance and how to make sure that you’re at the peak of your performance to be able to balance. A lot of my insights have also come from personal experience and then experimenting with the right training that’s necessary for it.

I’ve been able to see for myself and for others where balance fits into [athletics]. I know from playing Ultimate Frisbee that it also fits in there, too, and it’s something that I use as an indicator to know if my physical state is at its peak. If my balance is at its peak, I know everything else is in good shape.

You’re controlling your entire body to be able to maintain stability relative to gravity. This is why I say I use it as a bit of a guide because when I’m training, I make sure that I’m doing exercises that are going to keep my neural pathways sharp and firing because I know that translates really well into athletic performance.

Pierce | You first started playing Ultimate Frisbee in 1994 while you were studying at the University of Bristol. After that, you went on to play for Great Britain’s national team. What are your career highlights?

Forth | I competed in the World Games for Great Britain. That’s under the International Olympic Committee. It’s the stepping stone right before the Olympics. I also had a chance to play for Team USA … and we won the world championship in 2016.

Pierce | As a neuroscientist, innovator, entrepreneur, elite athlete and mother, you’re quite the Renaissance woman. What advice do you have for others?

Forth | I certainly don’t pretend to know all the answers, but I think something that has helped me is that I’ve been doing multiple things all my life. When the children turn up, it’s just another thing. It’s not as if that completely altered my entire world.

Specialization is an interesting topic. I think there’s a lot of pressure for people to specialize in things really early, whether it’s sports or academics. Trying to resist that as long as possible is really good so that you can learn from lots of different realms. Things I did in tennis apply to Frisbee. Things I learned in gymnastics applied to Frisbee. Even though I hadn’t done Frisbee all through my youth, I have a lot of other experience that transferred very directly.

Pierce | What lessons did you learn from sports that have applied to your career?

But at the same time, having so much experience on the physical side of it—whether it’s as a coach or as an athlete, as a trainer, all these different sides—I’m very passionate about the technology that we have because I know that this can truly help people. The sports and the passion allows me to drive the business; the business inspires me for my sport. Altogether, it keeps me moving forward.

This conversation has been edited for length and clarity.