Program focuses on nursing as a "healing ministry" and transformational leadership 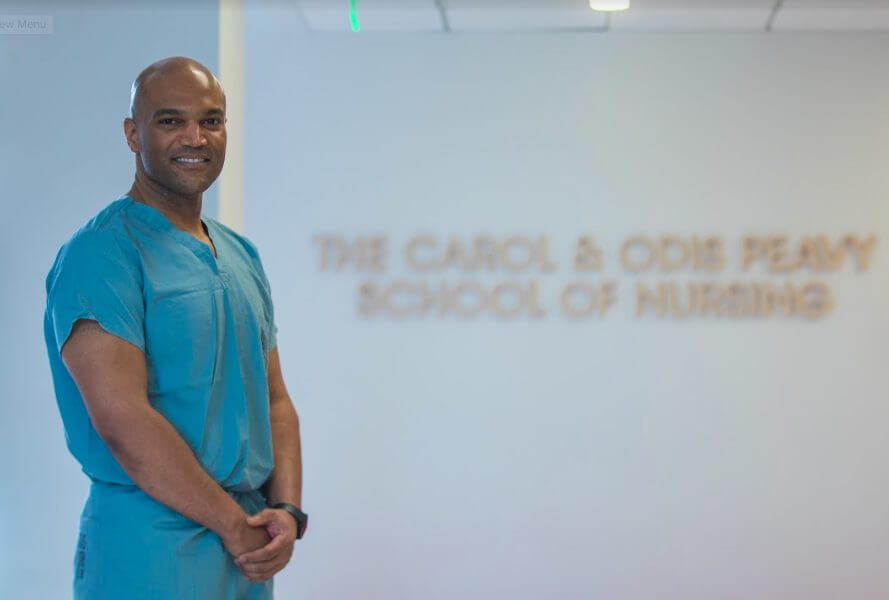 A decade ago, when the University of St. Thomas accepted a financial gift for the reopening of its legacy nursing school, the ambition was to train nurses again amid a growing nurse shortage in Texas and nationwide.

Starting with 28 undergraduate students in 2012, the Carol and Odis Peavy School of Nursing recently advanced its mission with a graduate program to educate leaders, administrators and professors.

“We have added the doctorate of nursing practice,” said Poldi Tschirch, Ph.D., dean of the nursing school.

According to a 2015 report from the Texas Center for Nursing Workforce Studies, the state will experience a shortage of trained nurses on every skill level by 2030. That list of professionals includes licensed vocational nurses (LVNs), registered nurses (RNs), nurse practitioners (NPs), certified registered nurse anesthetists (CRNAs) and certified nurse-midwives (CNMs).

The looming crisis partially hinges on the availability of nurse educators, namely dedicated academics with doctoral degrees. Fewer than 1 percent of the state’s registered nurses hold a doctoral degree, according to the Texas Center for Nursing Workforce Studies.

The opportunity to gain more education in his field at his alma mater convinced Corey Cowart to enter UST’s Doctor of Nursing Practice (DNP) program. He’s been a nurse at Harris Health System‘s Ben Taub Hospital since 2014, when he graduated with a bachelor’s degree in nursing from the university.

After an earlier career working his way up the ranks at Continental Airlines from baggage handling to corporate aviation, he returned to college with an associate’s degree and a family history of nursing.

“My grandmother and several aunts are nurses,” the 42-year-old said. “Seeing them and constantly hearing about their experiences in nursing influenced me. Their goal for me was to be a doctor. No one ever thought about a male being a nurse.”

Cowart now works in the Ben Taub operating room, but hopes the doctorate will help him advance into administration and executive nursing in the perioperative area.

“Everything is going well,” he said. “The way the program is designed, it works well with my schedule.”

The history of Catholic nursing education in Houston spans more than a century. The order of nuns who opened St. Joseph in 1887, the city’s first hospital, also organized a nursing program there in 1905. In 1947, the school transferred its affiliation to Dominican College, which closed in the mid-1970s. The first nursing program at St. Thomas, run in part by sisters from the Dominican order, offered a bachelor of science degree in nursing from 1972 to 1986.

In the ensuing decades, alumni and supporters vowed to revive the school and maintained an endowment fund to support future efforts.

Carol and Odis Peavy gave the university $2.5 million in 2008 to reignite the program. Carol Peavy was a Dominican College nursing graduate, former St. Joseph nurse and previous UST nursing professor. Odis Peavy is the founder of Houston’s PV Rentals. More money from various sources followed to endow faculty positions and provide scholarships. The nursing school was named in the couple’s honor in 2014. (Carol Peavy died in 2017.)

Tschirch, a retired University of Texas Medical Branch (UTMB) nursing administrator, was hired 2009. The first new crop of bachelor’s-level nurses graduated in 2014. The school’s home is a new campus building, also supported by the Peavys, called the Center for Science and Health Professions.

The program has grown to more than 200 students, who will help bridge a crucial current and future need for nurses and nurse educators.

The doctoral program’s first cohort of eight students began studies in August. There are two tracks: A three-year program for students who have earned a bachelor’s degree with some years of experience and a two-year curriculum for those with master’s degrees.

“We envision nursing as a healing ministry,” Tschirch added. “This focuses on our understanding that the principal role of the nurse is to provide the conditions and relationships that facilitate healing for their patients and the community.”

The DNP program also teaches transformational leadership, which attracted Maribel Bhojani—a veteran nurse with a master’s degree who earned her bachelor’s degree in nursing in the Philippines.

“For me, nursing is truly a calling,” she said, explaining how she cared for HIV/AIDS patients in New York City in the mid-1980s when the virus was considered a death sentence and patients were admitted only to a handful of hospitals and hospices.

“Frontline nurses didn’t want to take care of these patients,” she said. “Because I am the head nurse, I had to be a role model.”

Bhojani, 59, moved to Houston in 1994 and worked at UTMB as a case manager for HIV/AIDS patients before switching to nursing education two decades ago. She entered UST’s doctoral nursing program to learn more about empowering and engaging others within organizations.

“We need nurses to have a voice in the policymaking and education and, at the same time, to be able to make changes in the health care system,” Bhojani added. “We not only need to be highly specialized, but we need to be very knowledgeable in what we do. That capacity is being honed at the University of St. Thomas.”