Marburg virus, a cousin to Ebola, has been found in bats in West Africa

UTMB's Thomas Geisbert, Ph.D., discusses transmission, preparedness and his work on a vaccine

Marburg virus, a cousin to Ebola, has been found in bats in West Africa In late December, two teams of researchers reported that fruit bats in Sierra Leone tested positive for the Marburg virus, marking the first time the deadly disease has been detected in West Africa. Like Ebola, Marburg is a highly contagious hemorrhagic fever virus that can be transferred to humans. Because of the work of scientists like Thomas Geisbert, Ph.D., a professor of microbiology and immunology at the University of Texas Medical Branch at Galveston (UTMB Health) who has dedicated his career to these hemorrhagic viruses, the threat of an outbreak seems more manageable than in years past. TMC News Senior Writer Alexandra Becker spoke to Geisbert to discuss the importance of ongoing surveillance efforts, fears about the current Ebola outbreak in the Congo, the lifesaving vaccines he helped develop and what remains to be done to prevent a Marburg epidemic.

TMC: The presence of Marburg in West Africa was detected during routine testing for the virus. Why is this kind of surveillance important? 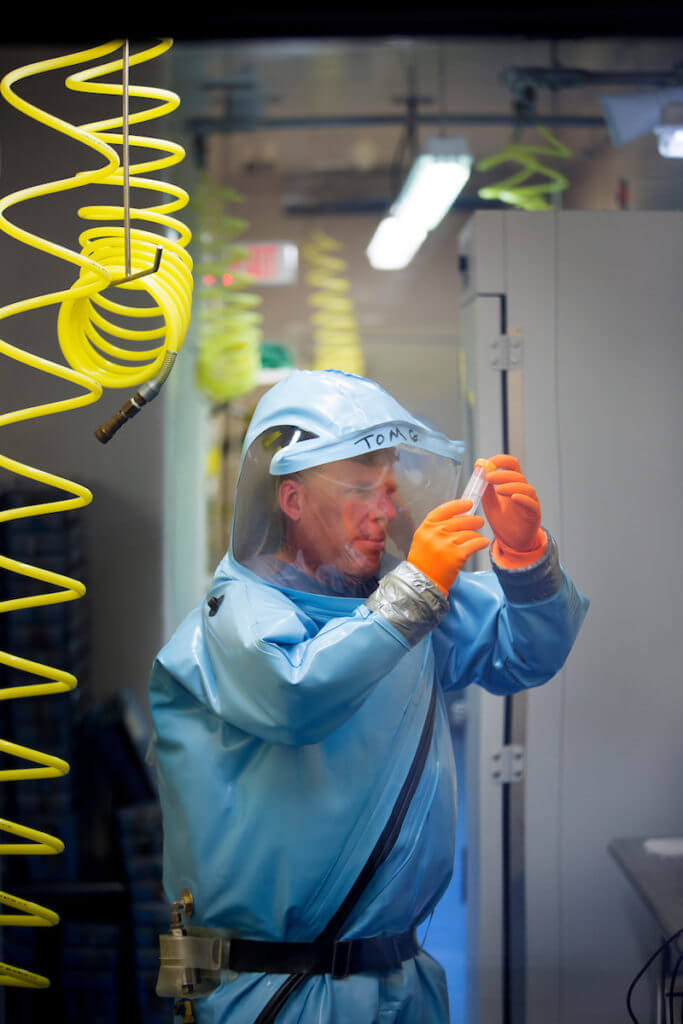 Geisbert: The surveillance work is very important. It’s like a football game where you get the other team’s plays ahead of the game. Any time you have an idea that some particular agent that’s a human pathogen is active in a certain area, preparedness is critical. I think we learned a lot from the Ebola epidemic in 2013 to 2016, and advanced warning and knowing what you’re dealing with is hugely important.

When thinking about the Ebola outbreak, it looks like the Merck vaccine [rVSV-ZEBOV] did a pretty good job towards the end of that outbreak. Now, whether we can say that the vaccine contributed to ending the outbreak or not, I think the jury’s out on that and we don’t know. But I think clearly the vaccine was successful—there’s no question about that. The data is extremely strong. And if you have medical countermeasures like that, it takes time to get these things into place, so there’s nothing like advanced notice and just not being caught off guard.

TMC: You and your team were instrumental in the development of the rVSV-ZEBOV vaccine for Ebola and you have also been working on one for Marburg virus. Can you tell me more about that?

Geisbert: We have a vaccine for Marburg virus that is based off the same backbone as the one for Ebola; it’s the same system. It is a VSV-based vaccine that functionally operates just like the Ebola vaccine, and we’ve completely protected monkeys using the vaccine. And, because Marburg is a little different than Ebola, it actually works even better than the Ebola vaccine in the context of post-exposure. For the Marburg vaccine, we can actually give the vaccine to monkeys at short times after exposure and still completely protect the monkeys, where that’s harder to do with Ebola—but it’s always a race with the clock.

TMC: Is the Marburg vaccine ready for human use, if needed?

Geisbert: It has not been tested in humans yet, but I think the experience with the Ebola vaccine would help move the Marburg vaccine forward faster than what we saw with the Ebola vaccine, because it’s the same backbone. In other words, the delivery—the carrier vehicle—is exactly the same. The only difference is that one vaccine has the Ebola glycoprotein and the other has the Marburg glycoprotein. If you’re a regulatory agency and you’re trying to do clinical trials, that’s important. But clearly, you’re going to want some safety testing and some Phase 1 trials, but I think the whole process would move a little faster than it did for Ebola.

I think this report—this discovery that the virus is present in bats in West Africa—lets people know that Marburg is there in a resource-poor area that is susceptible, and hopefully it serves as a warning that maybe it’s time that we get these Marburg vaccines advanced a little faster and really to the same point where the Ebola vaccine is—at the very least in terms of a Phase 1 trial.

TMC: How does a virus like Marburg or Ebola get transferred from bats to humans?

Geisbert: There are many different ways and we don’t know for 100 percent certainty that bats are the only reservoir host or the only species that carry these viruses. But one of the things that has historically happened is that people will visit caves with zillions of bats, and they’re in contact with feces and urine and things like that, and exposure of secretions from bats to any mucous membrane or even a small abrasion or something on your hand can transmit the disease. And the thing with Ebola or Marburg is that it doesn’t take very much. One infectious particle is enough to initiate a productive infection. So that’s one way, just direct contact. But we also have to look at the different cultural mores in Africa, where people eat bush meat. People eat bats. Non-human primates come into contact with bats in the rainforests, and then they can become infected, and they’re also eaten in Africa. So, the whole process of butchering wild game is another way the virus can be passed from bats to humans.

TMC: Is the Marburg virus as fatal as Ebola?

Geisbert: It’s very similar to Ebola. The fatality rates have ranged and it’s dependent on a number of factors. We can study this under controlled conditions using non-human primates in a BSL-4 laboratory—they’re the closest and the best model for humans. Historically, for Marburg infection in humans, the mortality rates have ranged from around 23 percent all the way up to 90 percent. And again, there are a number of variables as to why. The original outbreak in Marburg, Germany, which was caused by humans in a vaccine production facility taking kidneys from infected monkeys imported from Uganda to make cell cultures and prepare tissues, was only about 20 percent. But they also received excellent medical care. Even though they didn’t have specific vaccines or treatments, they had good supportive care, and we still believe that makes a difference. If you look at the Ebola outbreak in 2013-2016, the case mortality rates for the people who were repatriated to the U.S. and Europe were much lower than those in resource-poor settings, so I think there is something to be said for really high-end, supportive care reducing mortality rates. For the Marburg outbreak in 2005 in Angola, the mortality rate was right around 90 percent. And there are also differences with different strains of the virus. The strain that caused the Angola outbreak that had a 90 percent mortality rate has a faster disease course in monkeys versus the other strains. So there are a number of different variables with Marburg that would determine the disease course and how you contract the virus also determines that. If you stick yourself with a needle, the higher dose of the virus would probably cause a faster disease course than if you got a smaller dose of the virus through some mucosal membrane. But the incubation period is very similar to Ebola and the symptoms are very similar. If you are looking at a patient or an animal that’s infected with Marburg, you’re not going to be able to tell the difference between that and Ebola. It’s going to look the same.

TMC: In light of a potential threat of a Marburg outbreak, what are you and your team currently focused on in the lab?

Geisbert: We receive funding from the NIH, from NIAID [National Institute of Allergy and Infectious Diseases], to develop medical countermeasures against both Marburg and Ebola, so we are focusing a lot of effort on multi-pronged approaches for both, so that you have an insurance policy if something doesn’t work. We’re working on vaccines as well as post-exposure therapies—we want to be able to both prevent Marburg by really developing the vaccines, and then also develop treatments for someone who has been exposed and wasn’t vaccinated.

For prevention, we are working with a lot of different vaccines, particularly the VSV vaccine that’s the counterpart to the Ebola vaccine. We’re looking to see if a vaccine that would go into humans will be as efficacious as our research-grade vaccine and are doing studies that would support licensure through the animal trials. We have a lot of questions. In addition to post-exposure, can we vaccinate a doctor or nurse or first-responder, put them on an airplane, and if they are exposed to Marburg three days later, are they protected? And one of the big questions we’re interested in is how long the vaccine is good for. Will it provide protection for years?

Then on the treatment front, what if somebody comes in and they’ve got a full-blown case of Marburg? The MR191 antibody has been successful, but it’s a single antibody, and right now we would like to find another antibody that targets a different part of the Marburg virus to combine with that. One of the things we’re always concerned about is having broad coverage, so if there is a small sequence change in Marburg, you are still protected. We try to find conserved regions in the virus to target those and hopefully, if there’s a new outbreak caused five years from now by a new type of Marburg that has a slight change in the sequence somewhere, you’ve taken that into consideration and you can still protect against it.

We’re not putting all of our eggs into one basket. We’re continuing to work on other post-exposure interventions for all the strains of Marburg, including the most divergent. So, our research is really geared toward protecting against not just one isolate or species or strain. We want to protect against as many as we can with the same treatment or vaccine.

Geisbert: I hope, if anything, that this discovery of the virus in West Africa will propel policy makers to think about the importance of moving the Marburg vaccine forward a little more quickly, so that if something did happen, you would have the ability to respond more quickly. The current Ebola outbreak in the Congo right now is a nightmare because it’s in a war zone. It’s a logistical disaster. But in most cases, that’s not the case, and using a ring vaccination strategy can work really well. You vaccinate contacts of contacts of contacts—it’s a ring where coverage is around anyone who was potentially exposed, and it’s an excellent way to really contain something before it gets out of control. But, you have to be prepared.