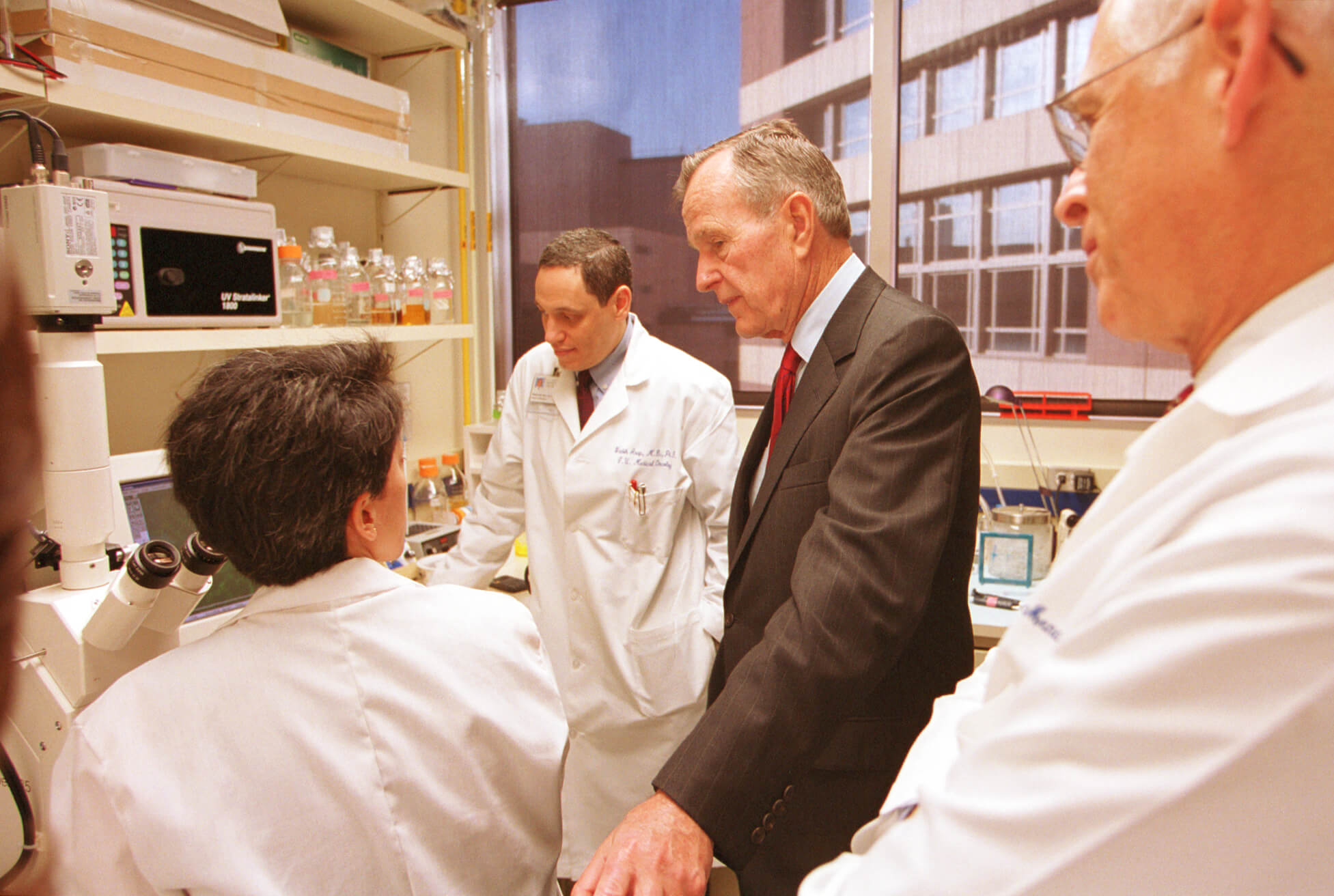 As we join our fellow Houstonians and the nation in honoring the life and legacy of George Herbert Walker Bush, our 41st President, we remember not only his remarkable service to our country, but also his impact on health, well-being and the Texas Medical Center.

He served as a member of the TMC Board of Directors for 25 years, starting in 1993.

The former president first joined The University of Texas MD Anderson Cancer Center Board of Visitors in 1977.

After losing their 3-year-old daughter, Robin, to leukemia in 1953, the president and his wife, Barbara, sought to share their passion for more effective cancer therapies. By lending their names, influence and philanthropic support, the Bushes helped raise nearly $90 million to support oncology research at MD Anderson. The Robin Bush Child and Adolescent Clinic at MD Anderson was named in recognition of their generosity.

The George and Barbara Bush Endowment for Innovative Cancer Research at MD Anderson Cancer Center, a $50 million fund, is an extension of their dedication to the institution and its mission.

In a 2004 interview, President Bush spoke to the national media about advances in the treatment of leukemia and remarked that his daughter would have lived “a full life” had she been diagnosed five decades later.

In terms of public policy, President Bush left an indelible mark on the nation by signing the Americans with Disabilities Act (ADA) in 1990.

Houston disability rights activist Lex Frieden, one of the ADA’s authors, told TMC News this year that working with Bush was a defining moment in his advocacy efforts.

“In January of 1986, I met with then-Vice President George H.W. Bush about the ADA. He supported what we were doing, but reminded me that he was just the vice president and as soon as he had the chance to do more, he would. Two years after that, he was elected president and in 1990, he signed the ADA,” said Frieden, the director of the Independent Living Research Utilization Program at TIRR Memorial Hermann who also serves as a professor at The University of Texas Health Science Center at Houston (UTHealth) School of Biomedical Informatics, professor of physical medicine and rehabilitation at UTHealth’s McGovern Medical School and adjunct professor of physical medicine and rehabilitation at Baylor College of Medicine.

“A couple of years ago, he had a meeting in downtown Houston and he was in a wheelchair at this point. They couldn’t park near the building because of construction. They got him out, pushed him down the street, down the curb, across the street, down the ramp and down the next block. After that, he said to me: ‘Am I really responsible for making those ramps on the sidewalk?’ I said: ‘Yes, sir, you are. You signed the law.’ He said: ‘That worked out pretty well, didn’t it?'”