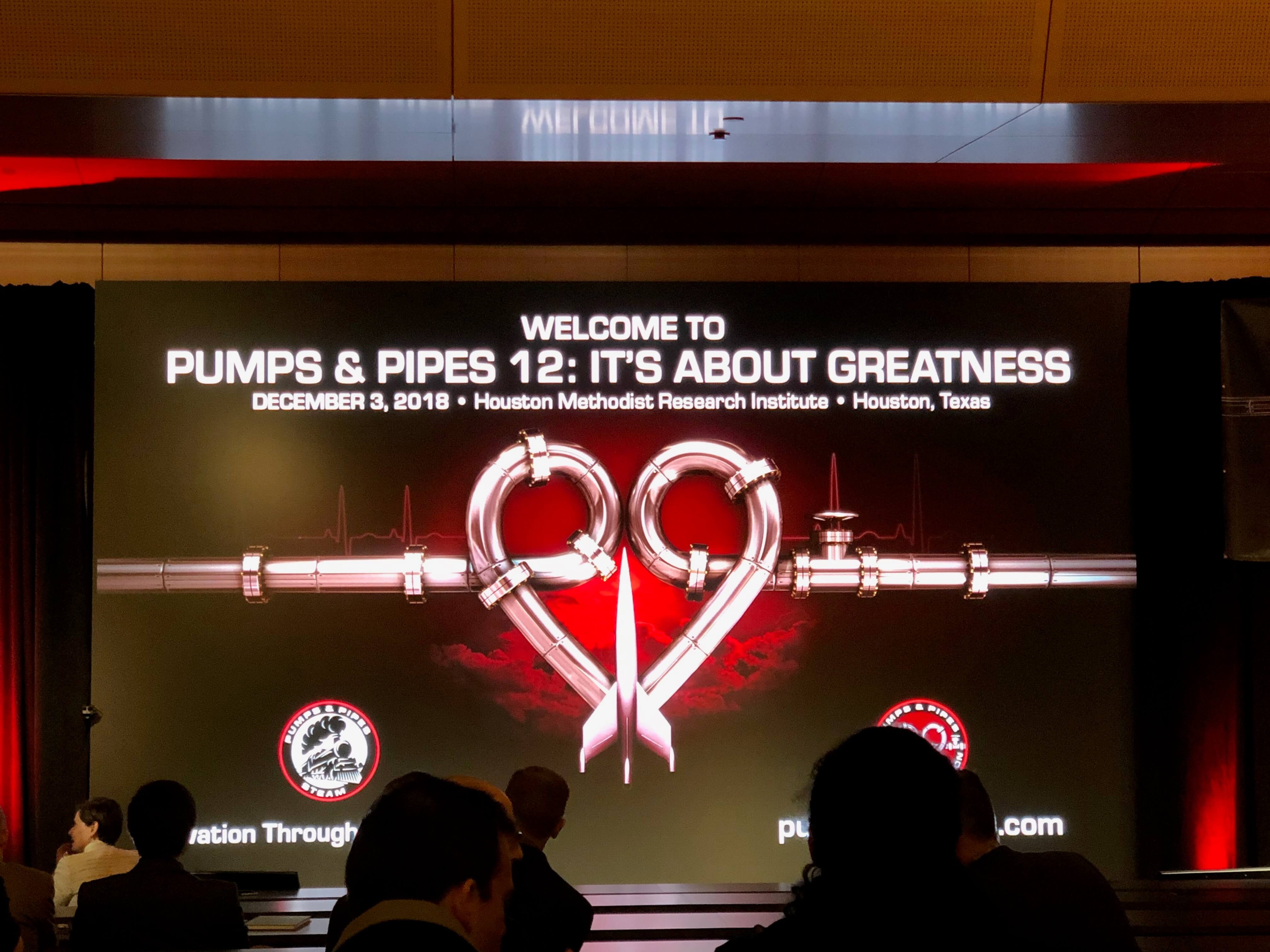 “It’s a very Houston story,” Cohn said, referring to his device’s roots in the Houston Methodist Institute for Technology, Innovation & Education (MITIE) and in the Cardiovascular Surgery Research Lab at Texas Heart Institute. “It’s as much about perseverance as anything else, and it’s about teaming up with brilliant, passionate people who make this happen.”

Cohn, a cardiovascular surgeon, invented the WavelinQ endoAVF System, formerly known as the everlinQ endoAVF System. The catheter-based technology is designed to provide minimally invasive dialysis access for patients suffering from chronic kidney failure. He developed a way to connect the artery and the vein for people with severe kidney disease using magnets.

Cohn introduced a prototype of the now-U.S. Food and Drug Administration-approved device at Pumps & Pipes in 2014.

Now in its 12th year, the event is based on the guiding principle that problem solving is “exploring your neighbor’s toolkit.” This year’s theme—“It’s About Greatness”—highlights the best innovations in medicine, energy and aerospace.

“On the face of it, it looks like we’re disparate industries. We’re not,” Lumsden said. “What does a cardiologist do? We navigate a hollow tube from the groin through a series of tubes to the heart. What does a drilling engineer do? They navigate a hollow tube from the surface all the way down 10,000 feet underground, two miles offshore. They never turn on any radiation to do that. We stand beside radiation all day. They do it using GPS navigation. Clearly, there are things we can learn from one another.”

“Greatness comes when ability meets opportunity and example,” he added. “Pumps & Pipes is about seeking greatness and expecting to find it.”

“I’d like to think that Pumps & Pipes identified a talent, saw what he was developing and gave him a forum to do that,” Lumsden said. “We’re very proud of what’s been done.”

Inspired by the legendary cardiovascular surgeon Michael DeBakey, M.D., and his invention of the first vascular graft on his wife’s sewing machine, Cohn decided to craft his career as a medical technology innovator.

“An obvious area for innovation in my mind seemed to be in creating [arteriovenous] fistulas,” he said.

Arteriovenous (AV) fistula is the surgical connection between an artery and a vein in the arm that provides dialysis patients with enough blood during treatment, which filters the blood through a machine as a substitute for lost or reduced kidney function.

“We need a place to hook the machine up to the patient,” Cohn said. “It’s got to be a blood vessel close enough to the surface where the nurse can stick the needles in. It’s got to have brisk enough blood that we can put blood through machine quickly enough. Where is there a blood vessel that’s large enough, that has brisk enough flow and is close enough to the surface? The answer is: there isn’t one, so we make one.”

Vascular surgeons make an incision on the arm, find a vein and sew it directly to the artery, effectively creating a “short circuit” to provide enough blood to flow. However, Cohn explained that surgically connecting the vein can lead to clotting, causing the dialysis process to fail and putting patients at risk for additional surgeries.

“It was very concerning to me though that a lot of these [AV fistulas] were blocked off in the first six to eight weeks,” Cohn said. “They were perfect fistulas. It turned out that was par for the course.”

Due to the trauma of surgically moving the vein and dividing the blood vessels, the body’s inflammatory response causes blood vessels to narrow and clot, inhibiting the connection of blood to properly flow for the patient to receive dialysis.

“I came to grips with the fact that there was nothing wrong with the way I was doing these,” the surgeon said. “There was just something flawed about the way we, as a group, created dialysis access.”

However, during the course of Cohn’s training in the mid-1990s, he came across two patients in the emergency room who would—unbeknownst to them—inspire him to solve the AV fistula clotting issue. One of the patients had been stabbed in the arm in an altercation over a parking space and the other had been stabbed in the thigh by his wife with a kitchen knife. In both cases, there wasn’t any visible bleeding; instead, they were both bleeding from the artery right into the vein, causing the vein to enlarge due to the increase in blood flow.

“I looked up in the big textbook of surgery about how to fix this and it said to take him to the operating room and meticulously repair them because they’ll never close on their own,” Cohn said. “Some guy with a pocket knife made a fistula that will never close on its own, whereas I—with my dexterous fingers and my magnified vision—had half of mine close up.”

Cohn conducted pre-clinical trials at MITIE and the FDA approved marketing of the WavelinQ EndoAVF System in June.

In August, Eric Peden, M.D., chief of vascular surgery at Houston Methodist DeBakey Heart & Vascular Center, became the first surgeon in the country to use the WavelinQ endoAVF System.