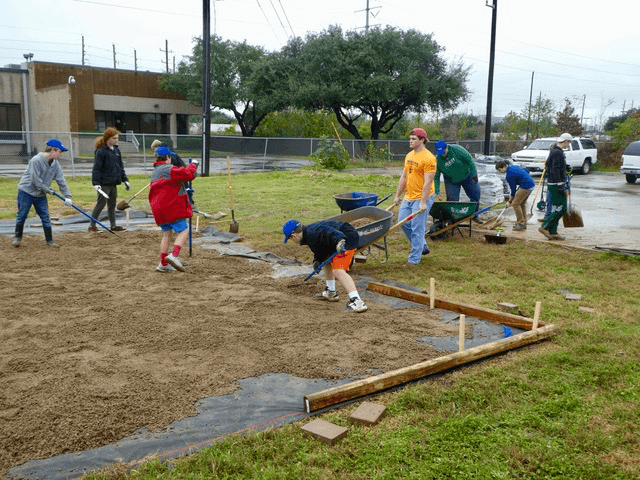 Christmas came early for transplant patients and their families staying at Nora’s Home thanks to Jesse McMillan, a junior at Strake Jesuit College Preparatory in Houston and member of the Boy Scouts of America.

In December, the 17-year-old and several of his classmates built a miniature golf course where guests can decompress from stressful medical circumstances.

This year, to earn the prestigious title of Eagle Scout, Jesse needed to complete a service project. It could have been anything—planting a garden in the community, collecting food and clothing or helping children—but Jesse knew he wanted to benefit people in the Texas Medical Center.

“I thought about some of my cousins. Their mom has breast cancer and they come to Houston for treatment a lot,” the teen said. “I thought about my cousin, Abbye, who had a heart transplant here in the medical center.”

“She passed away about two years ago,” said Sally McMillan, Jesse’s mother. “She was diagnosed with congestive heart failure when she was 24 years old, had an LVAD ( left ventricular assist device) and then received a heart transplant, but it was too late.”

After raising $14,000 for his Eagle Scout project, Jesse initially set his sights on building a playground at one of the hospitals for the children of patients.

“I just thought about my cousins and other kids like that,” Jesse said. “If me and my family weren’t here, they wouldn’t have been able to go to fun places while they were here and I wanted something fun for people who are sick to be able to do.”

But Nora’s Home guest Ximena Hernandez who recently received a double-lung transplant at Texas Children’s Hospital had another idea for him. Because they live in Arlington, Texas, the 8-year-old and her mother stayed at Nora’s Home for eight months while awaiting the transplant and after the girl’s recovery.

“I wanted a putt-putt course so I could have more fun,” Ximena said. “It will be fun to go outside instead of staying in my room watching TV. I can go out and play with my mom now.”

Ximena spent years plagued by a progressive condition that decreased her mobility.

“Bronchiolitis obliterans is similar to cystic fibrosis, but she wasn’t born with it. She got it when she was 6 years old,” Ximena’s mother, Leticia Jamie, explained. “She was having trouble breathing. It got so bad she was in a wheelchair, her bones were weak and she couldn’t do any of the activities other kids her age were doing.”

The six-hole course was built by Jesse and his friends in one day and has adjustable materials to make each hole more or less challenging for players.

“I was going to build the course from scratch, but then we found a company, Adventure Golf, that makes the holes individually and you can customize them,” Jesse said. “They sent us the holes in a bunch of little boxes and we had to put them all together.”

Just days after the course was built, Ximena was back in town for a check-up and was the first person to play . This also was her first time golfing.

“People can really do more than they think. I never thought I would be able to build a golf course like that, but being able to see a project all the way through is something I think everyone should at least have an opportunity to do,” Jesse said. “I don’t know what my cousins would have done if they couldn’t stay at our house. This didn’t exist at the time so I’m really happy I was able to build this for the patients here.”