Baylor St. Luke's doctor is the first in Texas to test the implant 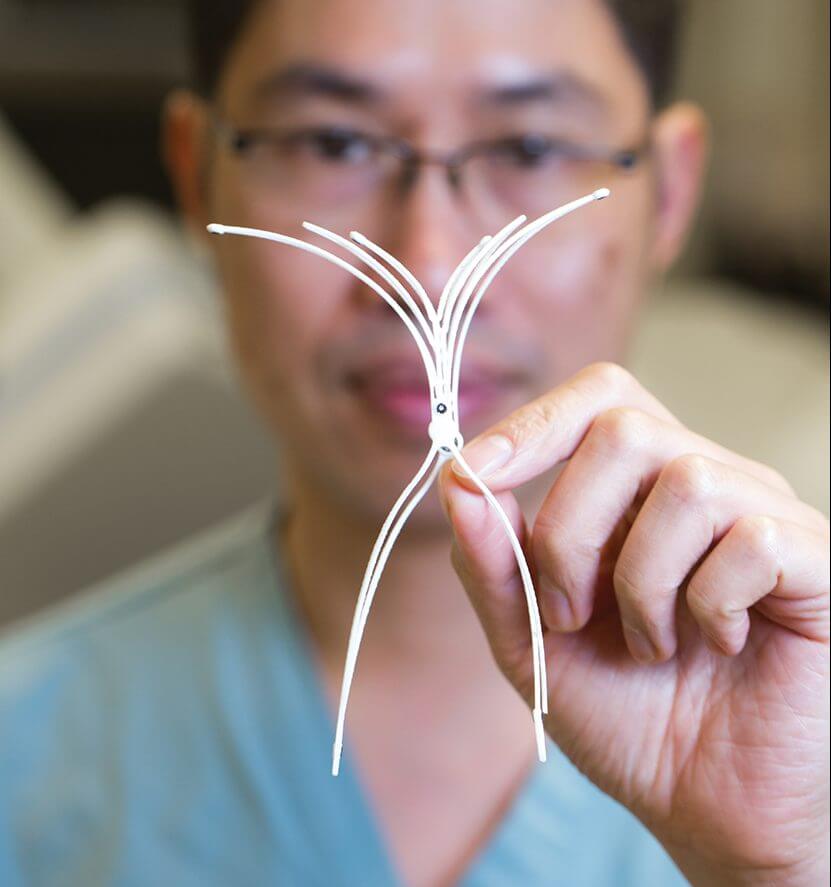 Wide-necked bifurcation aneurysms, which are balloon-like bulges in an artery wall in the brain, present a unique challenge for surgeons because of their location.

Resting near the base of the skull, these aneurysms can be difficult to dissect or treat with endovascular technology, said neurosurgeon Peter Kan, M.D., of Baylor St. Luke’s Medical Center.

Brain aneurysms are fairly common and can be repaired. But in 1 to 2 percent of patients, the aneurysm ruptures, causing headaches, dizziness and irreversible brain damage, he said. A traditional treatment involves surgical clipping, in which doctors place a tiny clamp at the base of the aneurysm to stop or prevent bleeding. Another corrective measure emerged in the early 1990s: accessing the aneurysm through a leg artery—known as endovascular surgery—rather than performing an open procedure on the brain. That method was the standard for years, Kan said.

Since then, a popular treatment emerged involving installing coronary stents or detachable coils as a way to seal off the aneurysm. But for wide-necked aneurysms, this procedure is not foolproof; the coils can fall out, Kan said, so doctors have adapted by using a combination of clipping and coils.

Most recently, surgical clipping with endovascular therapy has become the preferred treatment for wide-necked aneurysms. Kan was among the first to treat patients with PulseRider, a neurovascular implant developed by the California-based medical device company Pulsar Vascular, which enables minimally invasive endovascular treatment for the complex brain aneurysm.

“I have a long-standing interest in devices used to treat brain aneurysms, so I’m involved in a lot of trials,” Kan said. “I’ve done about six cases, and I’m trying to be one of the early adopters.”

PulseRider’s technology uses a collapsible, bony frame made of nitinol (nickel titanium) that is installed in a closed position through a leg artery. Upon reaching the aneurysm at the base of the skull, the frame opens like the scaffolding of an umbrella to reinforce the vessel walls and mitigate the problems of earlier endovascular devices while preserving blood flow. Essentially, the retrievable implant acts as a bridge for aneurysms located near a vessel branch point and is used in conjunction with coil embolization, where platinum springs are employed to seal an aneurysm to avoid rupture or hemorrhage, Kan said.

“We can use this as a bridge device,” he said. “We put stents in to hold the coils, but putting in that much metal is a risk.”

PulseRider leaves 90 percent less metal inside the patient than traditional stenting, Kan said, and also conforms to the anatomy of each patient’s aneurysm.

A group of European and American researchers tested PulseRider in 15 patients with unruptured wide-necked bifurcation aneurysms and published the results in the January 2016 edition of the American Journal of Neuroradiology.

Among the 14 patients where PulseRider was effective, 12 showed complete occlusions, or closed blood vessels, and two showed neck remnants, which is the presence of a portion of the original arterial wall. The researchers concluded that “PulseRider stent-assisted coiling of wide-neck bifurcation aneurysms was feasible with low procedural complication rates,” and that
“preliminary results are encouraging,” despite the study’s small number of participants.

“It’s a great device and there is an advantage to using it,” Kan said. In addition, the recovery period for patients treated with PulseRider is generally shorter than for those who undergo traditional open aneurysm procedures. In fact, Kan said, the first patient to receive this treatment at Baylor St. Luke’s was discharged from the hospital the day after PulseRider was implanted.Peter Kan, M.D., holds PulseRider, a neurovascular device that enables minimally invasive endovascular treatment of patients diagnosed with wide-necked bifurcation aneurysms.