Patient with spinal cord injury plans to return to military, school thanks to TIRR Memorial Hermann

Patient with spinal cord injury plans to return to military, school thanks to TIRR Memorial Hermann 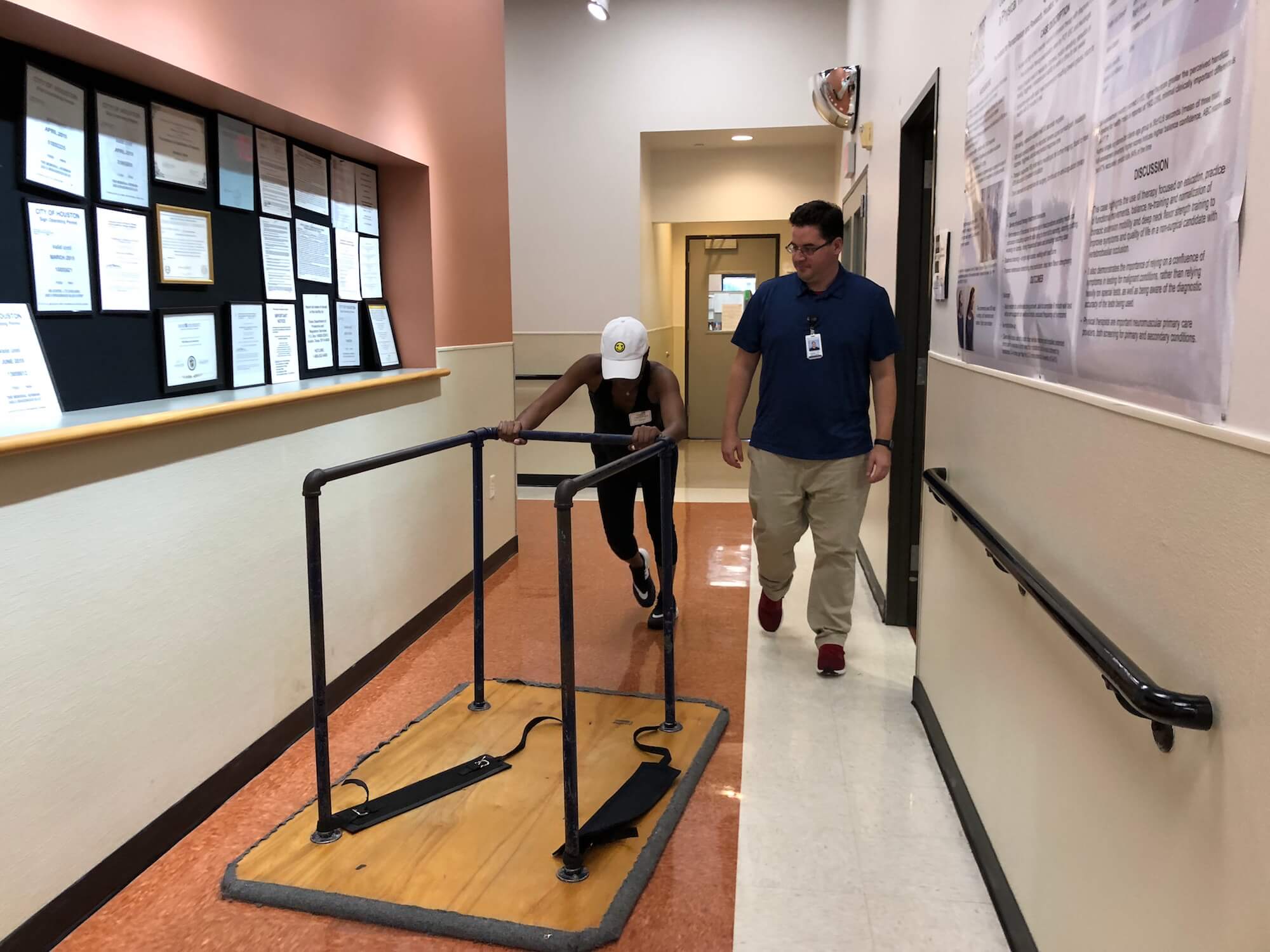 On May 8, 2018, Michaela Sneed was walking with a friend to a karaoke bar in downtown Shreveport, Louisiana.

The 26-year-old first lieutenant in the Louisiana Army National Guard was enjoying down time before starting graduate school at Southern University New Orleans.

As the women began crossing the street, a distracted driver in an SUV hit them. The impact from the accident tore Sneed’s spinal cord from the base of her skull.

She was transported to University Health Shreveport, where surgeons performed an occipitocervical fusion surgery, a procedure in which the C1 through C5 vertebrae are fused to the base of the skull.

“We were told it wasn’t a survivable type of injury,” said Sneed’s mother, Janice Sneed. “She wasn’t moving at the time. They weren’t sure if she would even make it through the surgery.”

Two weeks later, Sneed was transferred to TIRR Memorial Hermann in Houston—the No. 3 rehabilitation hospital in the nation—for in-patient care. Although she was unable to talk, walk, move her limbs or eat when she arrived at TIRR, her care team began intense therapy to jumpstart her recovery.

“My mom explained that, the day after I got here, I was in the gym,” Sneed said. “They put a ball behind my back and made me sit up because I was just swaying.”

The accident also caused Sneed to suffer post-traumatic amnesia. She was unable to remember the accident, her hospital time in Louisiana and many days after she left the hospital in Shreveport.

“I was in physical therapy or something. That was the first thing I remember,” she said. “I remember asking my mom, ‘Where am I? Where are we? What happened?’”

After six weeks of intense physical, occupational and speech therapy, Sneed—whom surgeons in Louisiana said had a high chance of quadriplegia—was able to regain feeling and movement in her arms and legs.

On July 6, she left the TIRR inpatient facility under the power of her legs, assisted by a walker.

“She’s always been a fighter. I could always see it in Michaela that she didn’t see this as the end,” Janice said. “When she got to the point where she could communicate, she said, ‘I want to walk out of TIRR.’ And she [did].”

Her next achievement in outpatient care was running.

“That was one of my goals before I leave—to just run a little bit, jog a little bit. It doesn’t have to be fast,” Sneed said. “If I can run, I know I can do anything.”

After spending a few more weeks in outpatient care and building her physical strength, Sneed accomplished her goal. On Sept. 25, she ran for the first time since her injury.

Sneed’s care team was led by Lisa Rose Wenzel, M.D., an attending physician at TIRR Memorial Hermann and assistant professor of physical medicine and rehabilitation at Baylor College of Medicine, who oversaw her recovery from a severe spinal cord injury that “most people would die from,” she said.

“It’s a miracle that she lived and went from being so severely neurologically impaired to having such a great recovery,” Wenzel said. “

On Oct. 11, Sneed’s last day in outpatient care at TIRR, she and her parents returned home to Louisiana.

Sneed is now hoping to pursue her master’s degree in social work and to return to her unit in the next year.

Sneed has been “an inspiration for a lot of our patients,” Wenzel said.

“This is a patient who came in to the hospital dependent for all of her care. Now she’s completely independent with her care and is making plans to return back to grad school,” Wenzel said. “I really feel like … her testimony, her story [will] help other people who have gone through difficult injuries or times to be able to keep hope, be optimistic, work hard and not lose sight of their dream.”