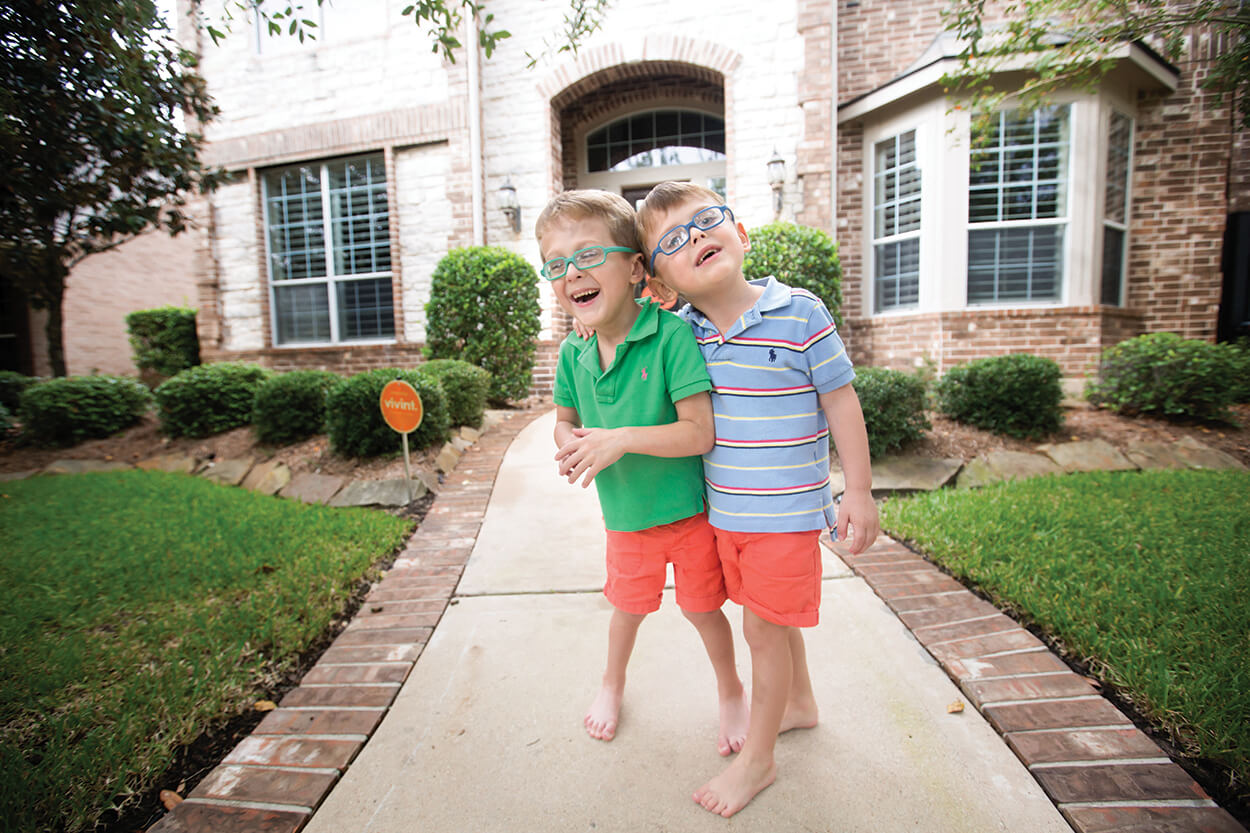 Twins Henry and Charlie Fitzpatrick are as physically active as most 5-year-olds. They chase each other, play with their dog and dance to Michael Jackson videos.

But their parents, David and Aly Fitzpatrick, weren’t always sure the boys would grow to be the rambunctious children they are now. When David lifts up their shirts to tickle their bellies, the reason is evident: Both have several scars resembling railroad tracks—reminders of the multiple surgeries needed to keep the brothers alive during their first months of life.

The twins continue to grow and thrive, in part, because of Omegaven, an omega-3 fatty-acid-rich lipid solution made from fish oil. The potentially life-saving drug is an important source of nutrition in infants suffering from a complication caused by long-term liver damage, known as parenteral nutrition-associated cholestasis or PNAC.

Over the last decade, Texas Children’s Hospital has treated nearly 300 babies of PNAC with Omegaven while gaining recognition for its work and attracting patients from across Texas and beyond. Omegaven was approved by the U.S. Food and Drug Administration on July 27, 2018 as a source of nutrition for cholestasis, a liver disease characterized by the stoppage or reduction of bile flow.

Nearly 20 percent of babies who spend time in a neonatal intensive care unit (NICU) develop intestinal failure and are dependent on artificial nutrition called total parenteral nutrition, or TPN, according to Muralidhar Premkumar, M.D., a neonatologist at Texas Children’s Hospital and assistant professor of pediatrics at Baylor College of Medicine.

“These babies are born so early that their gut and intestines are immature,” Premkumar said. “Many of them develop necrotizing enterocolitis, an inflammation and infection in the intestines, and they can’t tolerate feedings. So they spend a lot of time on artificial nutrition. The liver comes under stress from the gut imbalance, which leads to the cholestasis.”

About half of TPN-dependent infants get better with time, but others like the Fitzpatrick twins develop severe liver damage that can result in death, Premkumar said. Treatment for those babies can include liver transplants, which also can have grave results.

“There is a 50 percent mortality rate with liver transplants, so the goal was to avoid this at all costs,” said Amy Hair, M.D., program director of neonatal nutrition at Texas Children’s and assistant professor of pediatrics at Baylor College of Medicine. “We have a way, with this life-saving drug, to avoid this horrible road. We can give them Omegaven to save and protect the liver and we don’t have to talk about a transplant.”

Among the Texas Children’s babies on Omegaven, 85 percent get better with time, and over the last five years not one has needed a liver transplant, Premkumar said.

The FDA approval follows 10 years of work by neonatologists and neonatal nutrition experts at Texas Children’s, Boston Children’s Hospital and the University of California, Los Angeles (UCLA) Mattel Children’s Hospital. Team members collected data on patients, including Charlie and Henry Fitzpatrick, who were part of the compassionate use protocol of Omegaven.

Boston Children’s began testing the drug under the leadership of Mark Puder, M.D., Ph.D., an associate in the hospital’s department of surgery and professor of surgery at Harvard Medical School, who brought Omegaven to the United States. The drug, developed by German health care company Fresenius Kabi, was already used by doctors across Europe.

Pruder and other researchers studied the use of fish oil-based emulsions on 10 patients receiving parenteral nutrition (PN) and published their results in the February 2010 edition of the Journal of Pediatric Gastroenterology and Nutrition.

At the time, researchers were concerned about the development of essential fatty acid deficiency (EFAD), which was why drugs like Omegaven were not widely used in clinical practice in the United States. The Pruder team found that none of the patients on Omegaven and PN developed the deficiency. In fact, the bilirubin level—a measurement used to determine jaundice, anemia and liver disease—improved in nine of the 10 patients. 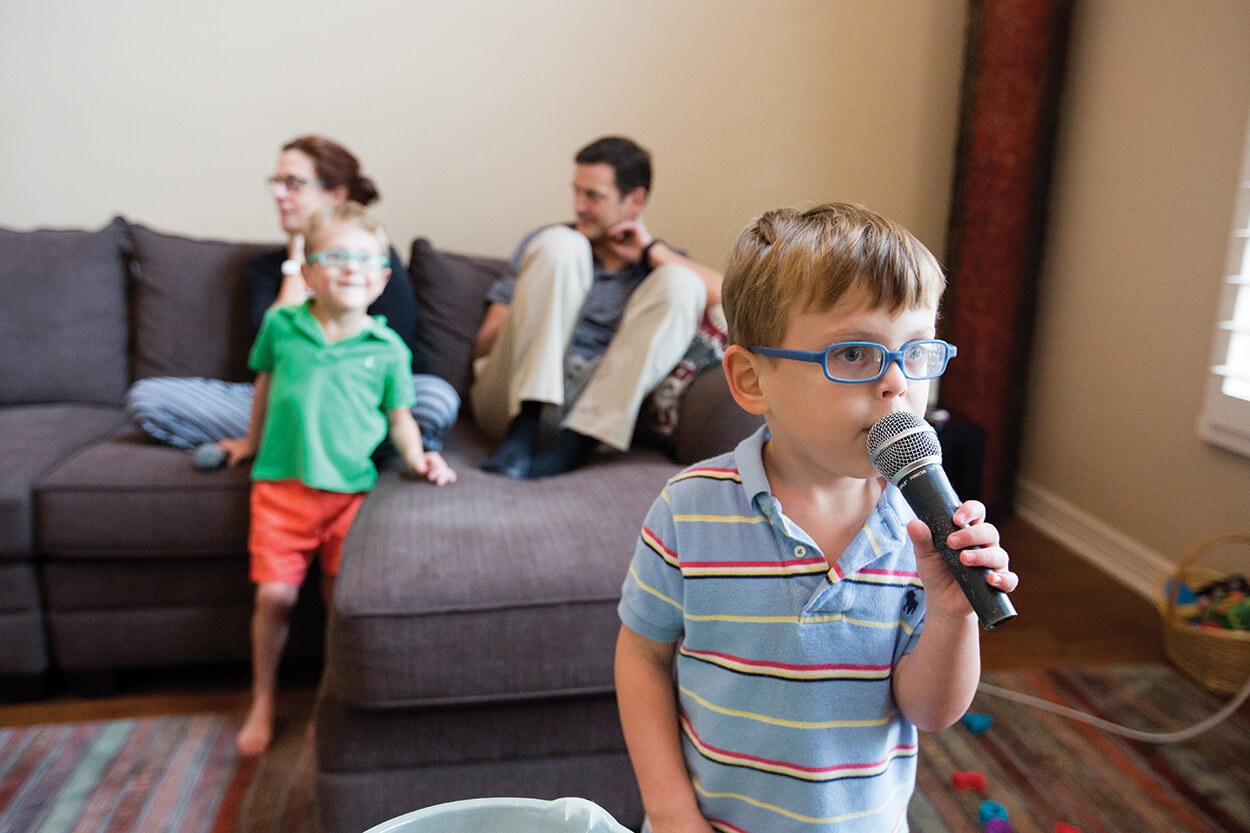 Steven Abrams, M.D., and Keli Hawthorne, a registered dietitian formerly with Texas Children’s, heard about Pruder’s work and brought the project to their hospital in 2007. The therapy was used there for six years, during which the Fitzpatrick boys were born.

When Aly was 20 weeks pregnant, the typical time an ultrasound is performed to take cervix and fetal measurements and deter-mine a baby’s gender, a technician found that Aly’s cervix was already thinning—something that happens during labor.

“We were devastated,” Aly recalls. “There was a chance we could have a child with disabilities or that never breathes on their own. It’s pretty much the worst news you could get.”

Though doctors tried to prolong the pregnancy with bed rest and other strategies, the boys were born at 23 weeks at Texas Children’s and remained in the NICU for six months.

The journey to discharge was difficult. The Fitzpatricks were committed to TPN for as long as necessary for Charlie to grow enough bowel to have surgery, but both children began getting infections. Concern shifted to their livers and the damage the TPN was causing.

Omegaven was introduced when both boys perforated their intestines, among other complications, and had to have corrective surgery.

“Dr. Abrams talked all about Omegaven, what he was doing and gave us a description of the Omegaven, but to be honest, I didn’t understand it,” David said. “I remember him saying this would be a trial, but he was confident in the treatment and that it was used in Europe, but not approved here yet.”

Nevertheless, both David and Aly said they were committed to the experimental drug. “We were like, ‘Yes, now,’” Aly added.

Charlie’s bilirubin level fit the parameters of the Omegaven study, but Henry’s did not, so he had to wait, which delayed his surgery. David and Aly recall being “extremely frustrated” that Henry wasn’t “sick enough” to be included in the Omegaven trial.

“I believe strongly to this day that if Henry had been put on Omegaven when Dr. Abrams wanted him to be, he would have been a lot less sick,” David said.

David and Aly said Omegaven had a quick effect on Charlie, to the point where the liver damage was no longer a concern. Eventually, Henry’s health declined enough to qualify for the trial and he was able to get the drug, which helped pre-pare his liver for intestinal surgery.

When the Fitzpatricks learned Omegaven was approved this summer, they were excited for other parents who won’t have to wait for their child to become sick enough to qualify for treatment.

“It’s not Omegaven’s fault or Texas Children’s fault that the parameters were like that, but we had to hope Henry got sicker so he could get the drug. That was horrible,” David said.

Bringing Omegaven to the masses

Thanks to Omegaven, more premature babies are surviving.

Forty years ago, doctors struggled to identify and associate liver damage with TPN, Premkumar said, but in recent decades grew better at diagnosing and detecting the complication even with limited ways to reverse it. Now, with Omegaven, they have a tool to save many more babies.

Omegaven continues to generate buzz with parents on social media who are exploring how to use the drug and trying to determine whether it’s safe, Hair said.

With FDA approval, Premkumar and Hair said they now are educating other institutions about using the drug properly.

“We have had 10 years to perfect it, and with Boston Children’s and UCLA, we have a chance to lead the way,” Hair said. “The neonatal community is ecstatic about Omegaven, and it is our job to take it a step further to help other centers.”