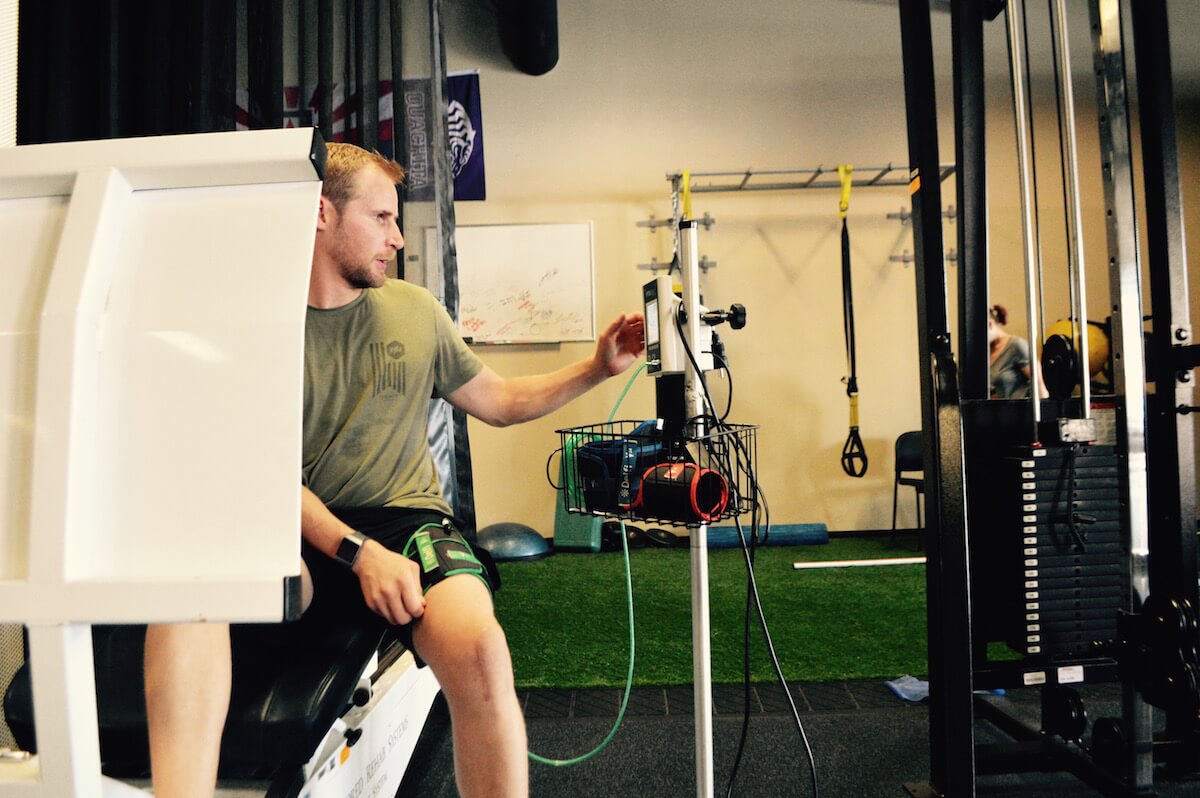 Four years ago, Walter Lowe, M.D., the team physician for the Houston Texans, watched as outside linebacker Jadeveon Clowney—the No. 1 NFL draft pick in 2014—injured his knee in the first game of the season. When word circulated that Clowney would undergo microfracture surgery to help grow new cartilage in his torn meniscus, the sports world buzzed with speculation about whether he would ever play professional football again. After all, the highly-specialized surgery that creates tiny punctures in the bone requires at least six weeks of non-weight-bearing recovery. For a professional athlete, that could mean losing a lifetime of muscle memory and strength.

Not long after, Lowe got a call from physical therapist Stephania Bell, a medical reporter and injury analyst for ESPN. She asked if he’d ever heard of blood flow restriction therapy or BFR. Lowe, who is also the chairman of the department of orthopedic surgery at McGovern Medical School at UTHealth and medical director of the Memorial Hermann IRONMAN Sports Medicine Institute, was only vaguely familiar with the concept. Bell told him about a physical therapist in San Antonio named Johnny Owens who had developed the treatment for patients at the San Antonio Military Medical Center, many of whom had returned from deployment with missing limbs or multiple broken bones. Those types of injuries, Lowe knew, were especially challenging because without the ability to bear weight on the limb during rehabilitation, it was notoriously difficult to build back strength—particularly enough strength for a prosthesis.

Could BFR work for Clowney?

Bell arranged for Owens and Lowe to speak over the phone. It turned out the two actually knew each other; Owens had spent a month as a young physical therapy student under Lowe’s tutelage.

Owens drove to Houston, where he and Lowe met with the head trainer for the Houston Texans to discuss Owens’ technology. They walked through the science and took an in-depth look at the apparatus. It didn’t take long before Lowe, speaking on behalf of the Texans and Memorial Hermann, said, “We’re in.” 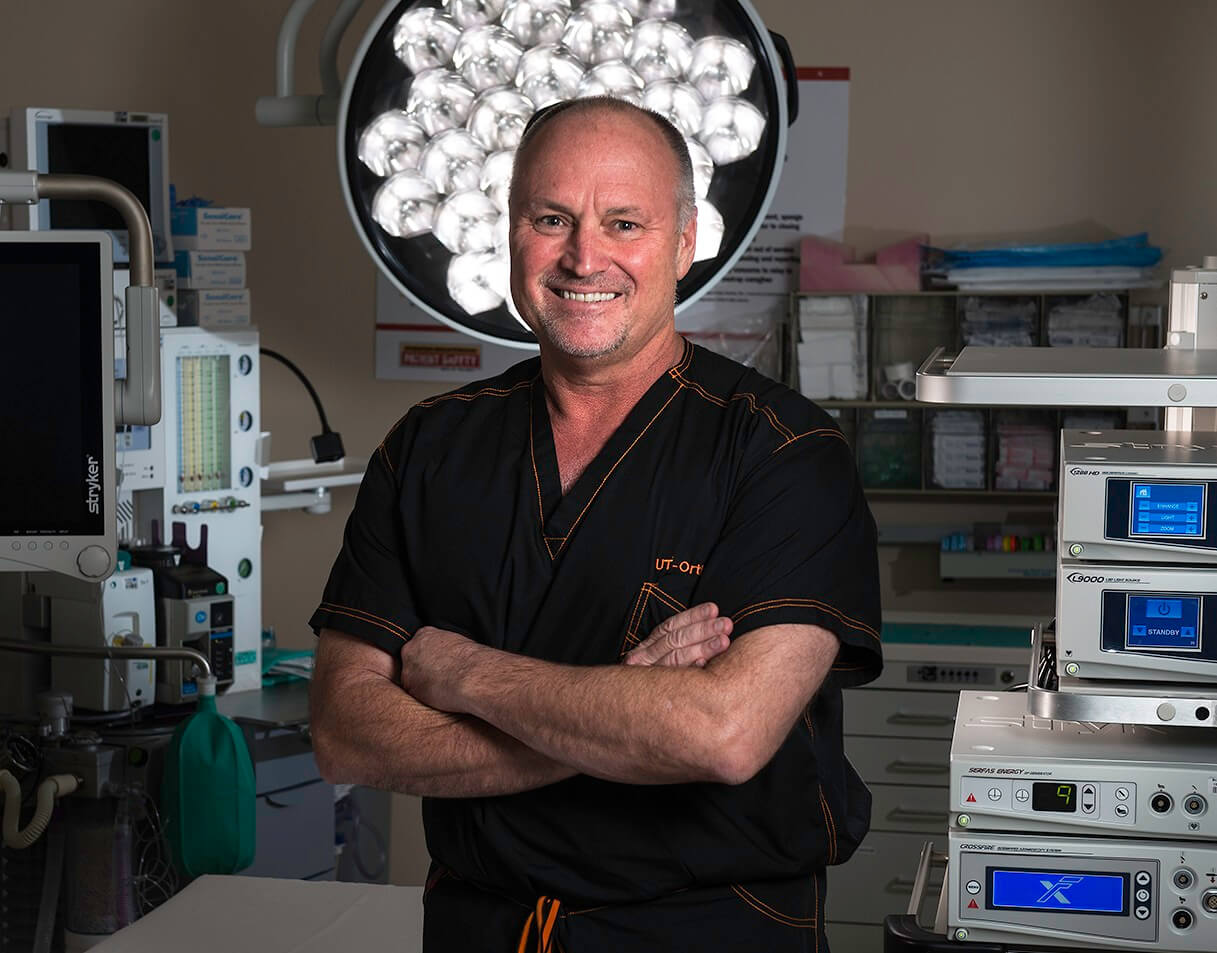 The BFR device includes a tourniquet cuff and an instrument with a digital display that self-calibrates and maintains pressure. BFR works by fitting the cuff onto the limb above the injury and then adjusting the pressure of the cuff to reduce blood flow to the limb by 80 percent. While some blood still flows into the muscle, the tourniquet completely occludes the venous drainage out of the limb and creates a high-stress environment in that extremity. This “tricks” the muscle by making basic exercises extremely difficult; patients feel as if they are lifting very heavy weights.

“It creates a high-stress environment in that extremity down below where the blood pressure tourniquet is, and so, under high stress, little muscle contractions can result in huge strength gains,” Lowe explained.

The technique worked for Clowney, who recovered and has become the Texans’ leading defensive player. In week four of the 2018 NFL season, Clowney was named AFC Defensive Player of the Week after returning a fumble recovery for a touchdown in a game that ended in an overtime victory.

After introducing BFR to Houston via the Texans’ training room, Lowe worked to get the devices into all of the Memorial Hermann IRONMAN Sports Medicine clinics. Meanwhile, Owens’ star rose quickly. BFR’s success stories among veterans and professional athletes were shared far and wide. Over the past four years, the technique has since become a mainstay in rehabilitation programs throughout Houston and the United States.

“Now it’s an integral part of most physical therapy programs,” Lowe said. “It’s all over the country. It’s used in every NFL training room, every NBA training room—it really has blossomed very quickly.”

Professionals working with elite athletes have started to use the therapy not just for injury rehabilitation, but for routine training as well, since lower weight load can reduce the risk of injuries outside the game.

Athletes “spend hours on their legs each day, so it’s a way to strengthen without having huge loads applied to their bodies, which they get too much of anyway,” Lowe said. “It substitutes lower-load exercise for some of the higher-load ones, and you can still build similar strength profiles.”

BFR has become so popular that it is now being applied to the everyday patient.

Kyle Shortsleeve, a veteran of the U.S. Army, found BFR to be instrumental in his recovery after undergoing a partial knee replacement in July of 2017 at age 30. Shortsleeve, who spent six years on active duty, encountered a number of injuries during training and deployment. He was medically retired in 2015 due to osteoarthritis in his knee. After his surgery, he went to Memorial Hermann IRONMAN Sports Medicine Institute where his trainers introduced him to BFR. Shortsleeve found the therapy helped with muscle hypertrophy—the growth and increase of the size of his muscle cells. 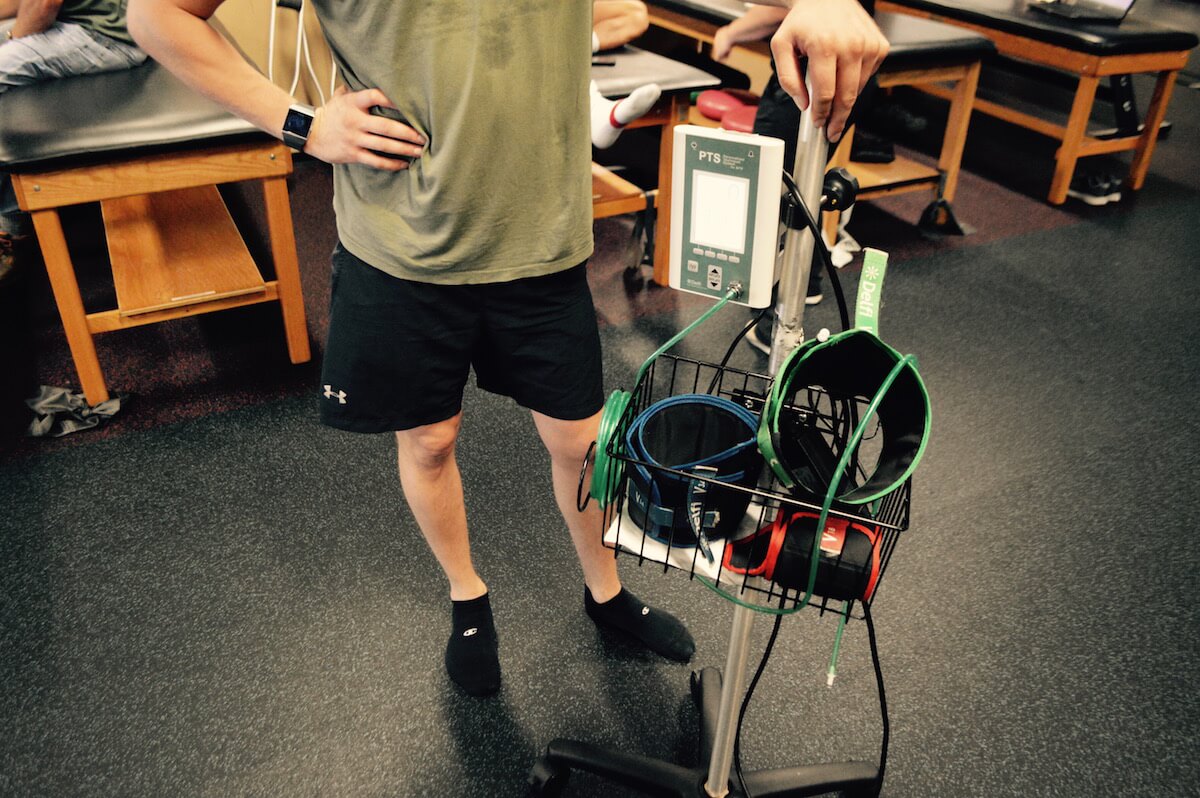 Kyle Shortsleeve stands next to the BFR machine during a routine workout.

“One of the reasons why this therapy has been so helpful is because the more muscle I’m able to build, the more protected my knee joint will be,” Shortsleeve said. “It was really effective when I was first recovering because it allowed me to gain strength and do some exercises that would contribute to hypertrophy without adding a ton of weight. I wasn’t in a lot of pain and it was still relatively low impact.”

Shortsleeve, who enjoys mountain-biking, snowboarding and backpacking, has regained his quality of life. He works in medical device sales and, according to his Fitbit, averages about 12,000 steps a day.

“I’m often standing in the operating room and I’m moving around in my customers’ clinics, so I need to be mobile to do that and then have stamina to continue to live my personal life after a long day of work.”