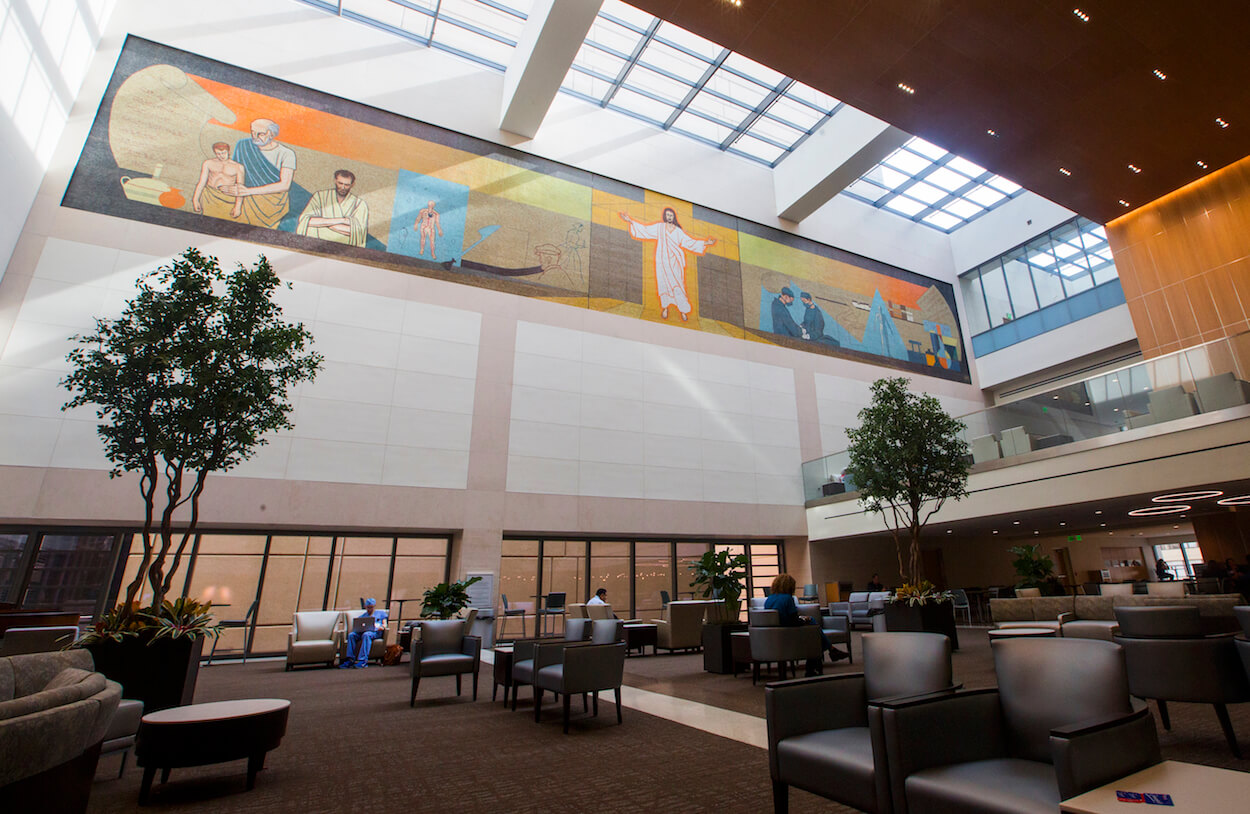 The atrium of Houston Methodist’s Paula and Joseph C. “Rusty” Walter III Tower is dominated by a massive retro mosaic that runs along an interior wall.

“There are about one and a half million tiles ranging from the size of your thumbnail to the size of your small fingernail,” said Sidney Sanders, senior vice president for construction, facilities design and real estate management at Houston Methodist Hospital.

More than 90 feet wide and 16 feet high, the massive mural captures a story of medicine and faith in rich blues, oranges, greens and yellows. The piece, Extending Arms of Christ, is more than 50 years old.

“The mosaic, I felt, was special,” said Ewing Werlein, Senior Judge in the United States District Court for the Southern District of Texas and former chairman of the Houston Methodist Hospital Board. “It symbolizes Houston Methodist as a Christian health care institution, extending care to all people.”

The mosaic positions Christ in the center, arms outstretched. To the left is Hippocrates, a Greek physician often regarded as the father of medicine; Galen, a physician and writer who became a famed doctorin the Roman Empire; and Florence Nightingale, the founder of modern nursing. To the right is a surgical theater, a microscope, X-rays and pharmaceuticals, representing medical advancements through the middle of the 20th century.

Extending Arms of Christ was created in 1963 by artist Bruce Hayes, fabricated in Florence, Italy, and then installed on the exterior western face of Houston Methodist Hospital on Fannin Street. As the hospital grew over the years, though, the mosaic became largely hidden to the public.

“In the ’80s, we expanded the drop off area, built Dunn Tower in 1989 and we put in a large covered entrance so patients could come and go in a protected environment,” Sanders said. “The result of that was the mosaic, which was right above that, was obscured. … The oak trees on Fannin Street also matured and it became out of sight, out of mind.”

When the hospital began planning Walter Tower, which opened in August, Werlein said his top priority was to restore the mosaic to its former glory and share it again with Houston Methodist patrons.

“It occurred to me that it would be a great thing to move the mosaic from its obscure place where it was really falling into ruins almost and move it, if we could, to the new building,” Werlein said. “I was excited at the prospect of doing that to bring it back to life—for the city, for the hospital and all of the people we serve.”

But this was no easy task. To transport the mosaic from Fannin Street to its new home on Bertner Avenue, about half a mile away, Houston Methodist enlisted the help of Rosa Lowinger & Associates, a firm with offices in Los Angeles and Miami that specializes in the conservation of art and architecture.

“They started the project by first investigating how the mosaic was installed,” Sanders said. “Fortunately, it was mounted in a fairly predictable way and it was able to come off without disrupting the structure behind it. [It was] cut in chunks, lowered onto the roof of covered parking on handcarts and then moved by vehicle.”

In all, the mosaic was cut into 83 pieces, Sanders said. Because some of the tiles were already missing or loose, the chunks were taken to a warehouse to be cleaned and restored.

In the Fall of 2017, teams began erecting the mosaic in the atrium and, today, it is fully restored and installed.

“That magnificent mosaic, with Christ in the center, symbolizes our spiritual mission that goes along with our healing mission,” Werlein said. “People from all over the world who come for healing will be able to see the mosaic and I hope they will be inspired and sense the feeling there of Houston Methodist and its emphasis on compassion and providing a spiritual environment of caring.”