Health economist Vivian Ho, Ph.D., on her career and her vision for the perfect health care system

Health economist Vivian Ho, Ph.D., on her career and her vision for the perfect health care system 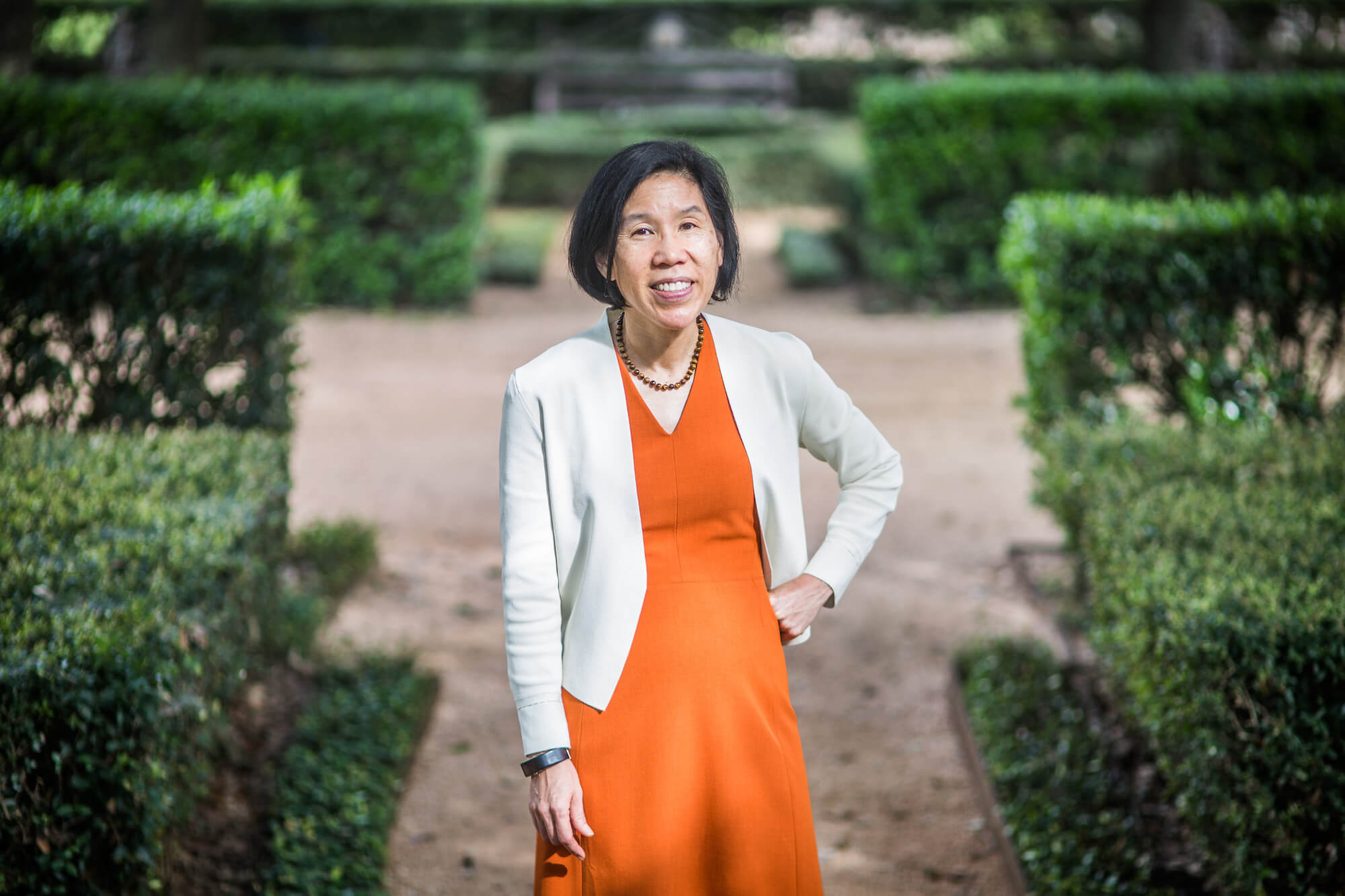 Health economist VIVIAN HO, PH.D., has spent more than three decades educating the public about health care and working to ensure people of all income levels have access to affordable care. She’d like to put herself out of business, but doesn’t think that’s likely anytime soon. Ho, who serves as the James A. Baker III Institute Chair in Health Economics and Director of the Center for Health and Biosciences at Rice University, spoke with Pulse about her peripatetic career and her vision for the perfect health care system.

Q | In addition to your position at Rice University’s Baker Institute for Public Policy, you’re a professor at Baylor College of Medicine. What is your mission as a health economist and as an educator?
A | When I came to the Baker Institute, it all became really clear to me that the goal is to get as many people as possible access to high quality health care. You can’t do that without health insurance. But health insurance is not going to be affordable until we control health care costs. I basically decided I’ll look broadly, but I am only going to look at projects where you find some way to control the growth of health care costs—whether it’s something as small as freestanding emergency departments or as big as how the Affordable Care Act is structured. You wouldn’t believe it, but this integration of physicians and hospitals is actually driving up costs. Everything is about getting people access to care by controlling the growth of costs. Some people just say, ‘Oh, yes, we have to get more people health insurance,’ but the reason why we’re having such a struggle and why so many people can’t get health insurance is because the underlying health care is too costly.

Q | I understand you grew up in Canada and moved to the United States at an early age. Tell me about your upbringing.
A | I was born in Montreal, Canada. My father was a chemical engineer. At an early age, we moved to Calgary, Alberta, for my dad’s work. It was so cold there. He tells me this story of when they were getting ready to go to a Christmas party and he couldn’t start the car. He had to take the car battery and put it in the oven and heat it up so that they could go to this party. He decided at that point it was much too cold and so he was able to go to Southern California to work for Flora Corporation, so I grew up in California since I was six years old. I consider myself mostly an American.

Q | You initially wanted to go into business before you became an economist. What made you change career paths?
A | I was planning on majoring in economics and becoming a businessperson. I didn’t know what a manager was, but I thought that sounded pretty good. Then I went to Harvard to do my undergraduate degree, and they have a senior honors thesis there. As part of the senior honors thesis, I ended up working with a visiting Australian professor who gave me this great opportunity to compare differences in wages between men and women in the United States and Australia.

This was with very a large database— the current population survey from the U.S. and then a similar survey in Australia. I thought the experience was so fantastic. You could tell stories about how the real world works by analyzing data. I thought, ‘This is great; this is what I want to do.’ I said, ‘Forget trying to go out in the business world,’ and went on to get a Ph.D.

Q | Why did you decide to focus on health care?
A | I feel like so much of my life has just been the accidents that happen along the way. When I was at Stanford for my Ph.D., I thought, since the background and work I had done so far was in labor economics, I would become a labor economist. But I was sort of struggling to find a research topic.

Late one night, one of the professors walked by my office. At that point I was going to do something on the newspaper industry. He says, ‘No, don’t do that. I was just over talking to someone in the Hoover Institution. You should work on health care. As a matter of fact, you should work on the hospice industry and the Medicare hospice benefit because no one’s doing any work on it.’ I had no idea. I didn’t know what Medicare was, really, and I knew very little about what hospices were. But at that point, I said, ‘Well, what have I got to lose?’ I started working on it, and it was fascinating.

This notion that the government tries to provide assistance to these families when someone is at the end of life; it’s such a difficult time. That was just the start of this career of learning, and, since then, it’s just been learning along the way. The industry, unfortunately, has grown to be a massive component of the gross domestic product—probably too much. But there is always something to learn—so many different components of health care and the changes that we’ve had along the way. It’s unending. I feel bad, though, because what I really want to do is put myself out of business. I’m not sure I’m ever going to be able to get there.

Q | Over the course of your 32-year career, you have published 91 papers, 57 abstracts and received 23 research grants—all related to the goal of giving people access to affordable health care. If you had a magic wand and could create the perfect health care system, what would it look like?
A | There are lots of people who get poor quality health care. In the Texas Medical Center, we have some of the best institutions in the world. People come from all over the country to go get treatment at many of our hospitals because they are world-renowned.

The challenge is to keep that while getting everyone access to the care they need. It’s a big, giant information problem in terms of patients. We need to figure out how to analyze our data to get the patient crystal-clear information on which providers are the best and to help providers figure out which are the best treatments. That’s the first component.

The second thing is there’s too much consolidation in the industry and I’m really very concerned about it. I don’t think consumers understand how pervasive consolidation has been for the last three decades, but it is steadily raising prices. The final thing is to somehow build the right incentives for people to engage in healthy lifestyles. That’s a big puzzle. The challenge of how to do that without disadvantaging a lot of people who don’t have the resources to live healthy lifestyles is pretty hard.

Q | Can you elaborate on how too much consolidation in the health care industry is detrimental to consumers?
A | How many different health care systems do we now have in this city? There’s Methodist, there’s CHI St. Luke’s, Memorial Hermann. … It’s a few major systems selling most of the health care, with four or five major insurers. Every time you have that few competitors, we call it an oligopoly.

Q | You aren’t the first person in your family to go to Boston.
A | My dad went there to get his undergraduate degree, then his master’s degree in engineering from MIT. My mom’s family did the typical Chinese thing: They ran a laundromat. The laundromat apparently was the place for young people to go and socialize, so they were there one night and my dad came with a friend. That’s how my mom and dad met. The laundromat is still there [in Massachusetts]. They kept that laundromat in the family for generations.

Q | Did your mother also attend school in the U.S.?
A | She did not go to school here in the United States. Her family left China because of the Communist Revolution. She was not able to enroll in high school or college once she got here. It was just a challenge enough for her to learn English. When she first came, she contracted tuberculosis. She was in a sanatorium for several months until she recovered. It amazes you that your parents go through this whole experience.

Q | After Boston, you moved back home to California to earn your Ph.D. in economics from Stanford University. You also returned to Canada to work at McGill University, then moved to St. Louis for a position at Washington University and relocated again to work for The University of Alabama at Birmingham. How has living in different cities across North America informed your work as a health economist?
A | I think that’s been one of the biggest gifts. It was just not planned, but to be able to learn about people, about different communities and their outlooks on life has definitely shaped my understanding of what people are looking for in terms of health care.

Q | How does Houston compare to the other cities you’ve called home?
A | This place is fantastic. I love it here. Some people complain about it, but there’s so much growth and activity that it’s this multicultural melting pot. At the Texas Medical Center, you get doctors who are tops in their field and they’re happy to talk about the health care system. I’ve written a lot of papers with terrific co-authors across the street. The Baker Institute and the relationship it has with the Texas Medical Center has been such a boon for me. We’re really lucky to have this general policy institute that is so well connected with so many talented doctors. That’s something that does distinguish us. Other think tanks don’t have that advantage and I think that shapes the type of work that we do.

Vivian Ho, Ph.D., was interviewed by Pulse columnist and news writer Shanley Pierce. The conversation was edited for clarity and length.