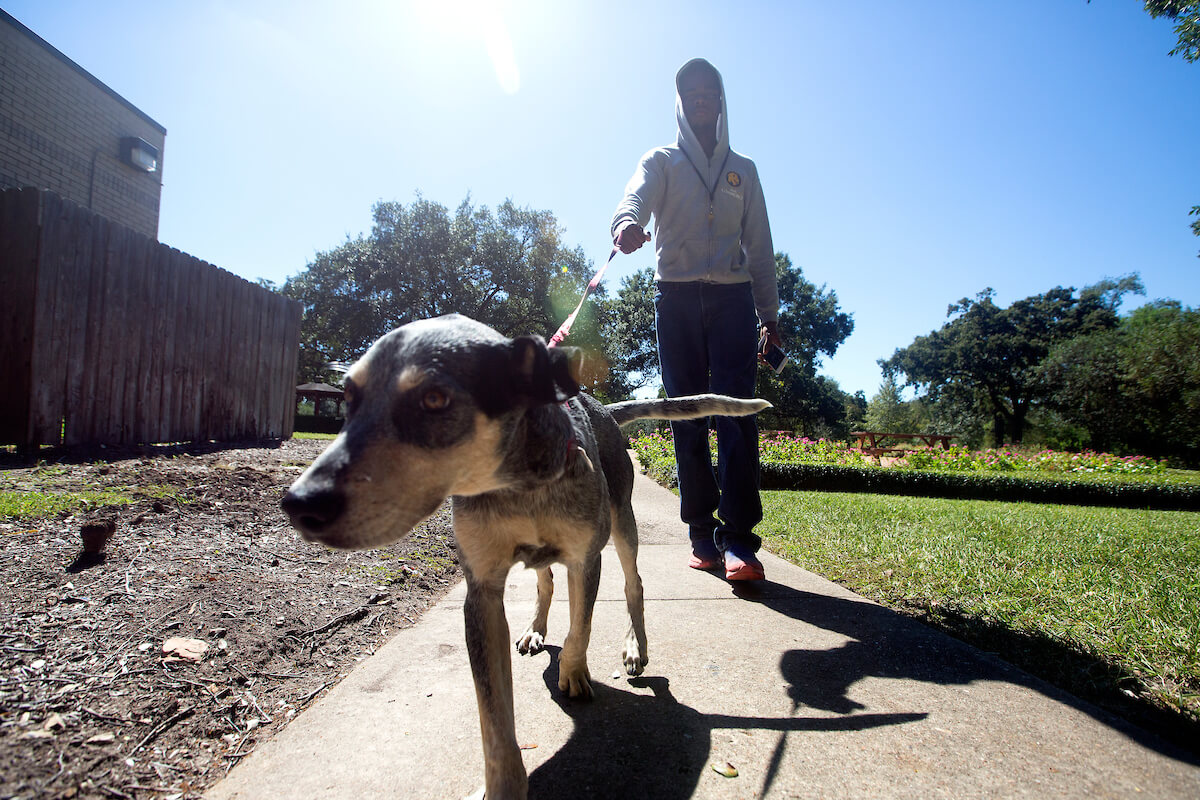 For young people in foster care, a loving, permanent home is the ultimate dream.

Those who reach 18 without being reunited with their families or adopted by new ones face uncertain futures. Many are left to navigate the challenges of adulthood—the fears and inevitable disappointments that come with grown-up problems and responsibilities— without the safety net of relatives or trusted mentors.

To provide a landing pad, DePelchin Children’s Center in Houston offers a support system for youth launching into adulthood alone.

Since 2013, Transitioning to Adulthood through Guidance and Support, an initiative known as TAGS, has provided dormitory housing and services through an extended foster care program to ado- lescents who are 18 to 21 years old.

A special feature was added in 2016 to help improve the lives and prospects of yet another category of unanchored souls—the fluffy, four-legged variety.

By housetraining and socializing homeless dogs, foster youth living on the DePelchin campus turn abused, neglected and abandoned pets into beloved companions who have a chance to find forever families. The young adults also learn aspects of responsibility that prepare them for life on their own.

It’s a win-win for the young adults and their canine companions.

Alyssa Carter has fostered 20 dogs during her three years in the residential program.

The 20-year-old beams as she talks about her most memorable charges, calling them by name and breed. Ace the Boxer. Maddie the Doberman. She quickly finds a video of a beloved mix, Teddy, gleefully eating cheese crackers— a remarkable improvement from the withdrawn dog who arrived with mange.

Her current charge, a hound mix named Cooper, was abandoned at a pet store.

“Somebody threw him in a dumpster,” Carter sighed. “He was just really sociable from the start. He is really well-trained. He sits on command. He’s actually really, really friendly.”

Carter moved from a foster home to the TAGS dorm a week after she graduated from high school.

“I was nervous. I didn’t know what I was going to do,” she said. “Coming here helped out a lot. I’ve got a roof over my head. It’s homey.”

“I dealt with a crappy situation and I feel bad that these dogs have to go through it,” she said. “It’s just my way of helping, if I can.”

Julie Crowe, DePelchin’s vice president of prevention and early intervention services, said the death of her beloved dog, Buddy, and the subsequent sharing of her grief with TAGS program coordinator and “house mother” Erin Wiebe sparked the idea to pair foster youth with homeless pets.

“We were talking about the role that dogs play in a person’s life and we ended up talking about how kids in foster care never have a pet,” Crowe said. “Oftentimes, we’ve heard the kids talk about how—even if there’s a pet in the home—they never felt like it was their pet because it was their foster home and not their permanent home. We also talked about the different things a pet can give you: unconditional love. Learning responsibility.”

That conversation morphed into a plan of action. Wiebe, a foster dog parent in her private life, helped the agency create a partnership with Lola’s Lucky Day, a Houston animal rescue. The nonprofit provides veterinary care and crates for the dogs, but does not provide food, collars, leashes, bowls, treats or toys. The program welcomes donations for those items.

“It took a little bit of discussion with agency staff because there was concern about bringing animals on campus and how this was going to work. But, it very quickly turned into a big acceptance of this program because agency leadership really saw how this was affecting our residents. It was bringing them together,” Crowe said. “The residents were so proud of the work that they were doing fostering these dogs and how much they loved these dogs and it was just really so evident so quickly that this was just a very positive addition to our program.”

The animals receive “loving, individual care rather than sitting in a shelter in a cage,” said Crowe, a licensed master social worker. “If you are looking to adopt a dog, and you know that this dog is house- trained and has been socialized and can even do a trick or two, that makes the dog much more appealing. I do think that it helps get these dogs permanent homes. The benefit for my residents is that they are getting uncondi- tional love, they are learning responsibility and it’s a really nice circle. Being able to foster and help a dog who also, somehow, lost their home or never had a family—and help bridge them into a permanent family—I think is really good for their souls. They know that these animals are now going to a permanent home. They know that they can’t offer this animal a permanent home right now, but there is another dog waiting to be cared for by them.”

In Texas, foster children are under the legal conservatorship of the Texas Department of Family and Protective Services. At 18, adolescents can choose to enter extended foster care in placements such as DePelchin’s residential group care facility and remain until they turn 22.

The state agency reported that 1,200 youth were emancipated from care in the 2017 fiscal year, which means they exited without successful reunification with their family and were not connected to another family through adoption or legal guardianship. Of those, 181, or 15 percent of the state’s total, lived in Harris County. More broadly, 246 individuals, or 21 percent, were from the Houston area and surrounding counties. On average, those emancipated young people spent more than five years in care and had eight placements during their time in foster care.

“I think the message in Texas is that young people are staying in care longer than the national average and, despite staying in care longer, they’re not achieving permanency. They’re still emancipating. So, even though you have young people with, maybe, more of an opportunity to reach permanency, it’s not happening. I think that’s significant,” said Leslie Gross, director of the Jim Casey Youth Opportunities Initiative, an arm of The Annie E. Casey Foundation that works to increase advantages for an “invisible population” of older young people in foster care and those transitioning out.

These challenges are chronicled in a recent report from the Casey Foundation, a Baltimore-based national philanthropic group focused on improving outcomes for children and families.

“Fostering Youth Transitions,” a first-of-its-kind national report on the troubling outcomes of youth exiting foster care for adulthood, focuses on the 171,000 U.S. children in foster care—25 percent—who are age 14 and older. The report was produced by the Jim Casey Youth Opportunities Initiative, which maintains that nearly 1 million young people in the United States ages 14 to 26 spent at least one day in foster care after turning 14.

Thousands of Texans face an impending potential exit from foster care. According to the report, 8,523 children, or 17 percent of the state’s foster care population, are 14 or older.

“It’s just extremely challenging when, suddenly, you’re in care one day and then the next day you are no longer in care and don’t necessarily have the people you need to rely on—even really basic things like supporting you to finish high school or apply to college. You don’t have a job. You don’t have a place to live. Often, young people feel like they are falling off a cliff,” Gross said. “They really need supportive adults to rely on to make a number of difficult decisions. The key things that we see in terms of the data is that young people have outcomes with respect to higher rates of incarceration, higher rates of becoming young parents and lower rates of education and employment.”

TAGS found a home on the DePelchin campus after the agency closed its on-site residential treatment facility that featured 20 rooms, 10 on each side, connected by a common area.

Those units were renovated to make them more comfortable and cheerful for long-term occupancy. Today, the program includes residents on the DePelchin campus, in the Rice Military neighborhood of Central Houston, and supports up to five students living in dorms at Texas Southern University in Houston’s Third Ward.

“DePelchin recognized that youth that were aging out of foster care were extremely vulnerable,” said Crowe, adding that these individuals were at risk of not completing their educations and not finding stable employment that would allow them to sustain financial independence. “Typically, they don’t have support from their biological families and when they exit foster care, a lot of them lose that connection. So, without the support, it’s really a challenge for them and makes them vulnerable to homelessness. They are at risk for committing a crime and ending up in our corrections system.”

The program maintains full occupancy and a waiting list.

In the TAGS program, young adults must earn the privilege of caring for a foster dog, which means they must be meeting the goals they have set for themselves. Live-in pets offer multiple opportunities to learn valuable life lessons.

“That is an incentive for many of them because they want to be able to foster,” Crowe said. “If they are gone all day to school or work, they have to get somebody else to help them with their pet. If [the dog] needs to be walked or they need to be let out or fed or their water changed, and they’re not going to be able to be there, that oftentimes involves some kind of negotiation. That is a real, good, usable life skill tool. Some are afraid to ask for help, so this is also teaching them that it is OK to ask for help when you need it.” Carter, who turns 21 in January, works at a local gaming store, but intends to spend another year in TAGS. Many of her lessons about independent living have come from Wiebe, who has guided her on everything from taxes and employment to college.

“Erin has walked me through a lot of stuff that I need to know when I’m on my own,” Carter said. “That’s why I started working. I’m trying to make money to get an apartment by the time I have to leave.”

Samuel Joseph’s first foster dog was a 12-year-old black Labrador retriever who had been chained outside and suffered pressure marks around her neck.

“They kicked her around. I just took her in and loved that dog,” he said. “I taught her how to shake hands.”

Then there was the “nervous” Blue Heeler named Calvin, also abused, who spent time with Joseph and developed a more outgoing demeanor before finding a forever home.

“I can relate to some of the dogs. I used to be a shy kid,” said the now-gregarious aspiring rapper who turns 19 on Christmas Day and has clearly overcome his previous reluctance to interact with strangers.

Joseph currently attends Houston Community College with the goal of becoming a physical therapist but may switch to an ironwork apprenticeship program.

TAGS has also helped Joseph focus on a positive future after potentially becoming another statistic in the “foster care-to-prison pipeline,” a disturbing trend in which 1 in 4 foster care alumni end up in the criminal justice system within two years of leaving care, according to the Jim Casey Youth Opportunities Initiative.

“I’ve been to jail twice and I’m not trying to go back a third time. I’ve changed my life around. I started doing my own thing. Playing smart. Making sure I’m not doing nothing wrong,” Joseph said. “I feel like living here is preventing me from doing the stuff I was doing when I was 15, 16 and 17.”