Fasting: Food for the brain?

Patients are skipping breakfast for greater clarity and longer lives

Fasting: Food for the brain? 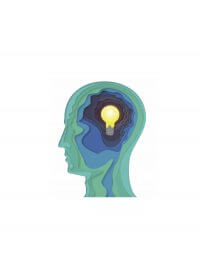 You are what you eat, but increasingly, fasters hope to be what they don’t eat, too. Although intermittent fasting is gaining popularity among those dieting for weight loss, some evidence suggests that abstaining from food for certain periods of time could also have profound effects on brain health.

Fasting has long been reported to help with mental acuity. Houston high school student Alina Khan, who fasts for Ramadan as part of her Muslim faith, says of eschewing food until sundown, “I think I’m more focused.” Comments like this made scientists wonder if there was a biological reason for such reports from patients.

According to Philip Horner, Ph.D., scientific director for the Center for Neuroregeneration at Houston Methodist Research Institute, “If you take two mice with an identical diet and one group does every-other-day fasting, their outcome from a head injury or spinal cord injury is much better.”

Scientists believe that new neural pathways and gene cells important for DNA repair are upregulated—their response to stimulus is increased—somewhere between 12 and 18 hours in a fasted state. That 12- to 18-hour window is what’s been observed in laboratory mice, but dietitians are betting on that length of time for their human patients, too.

Kristen Kizer, RD, LD, a registered clinical dietitian at Houston Methodist Hospital, says that most studies of intermittent fasting have focused on a 5:2 schedule, meaning subjects eat normally for five days a week, but restrict intake to 600 calories for two days.

“Personally, I wouldn’t want to be around me on my day I’m not eating,” Kizer jokes. “I have clients complain that the day they’re doing 00 calories they’re getting nauseous, they’re getting headaches, they can’t concentrate at work.” Even Khan, who said she thought more clearly when skipping lunch, admits that when celebrating Ramadan with her family, “We all get an attitude when we’re fasting.”

That’s why intermittent fasters are adopting another method, a 16:8 regimen, in which they consume all their calories within an eight-hour window. Houston Methodist pharmacist Chase Janak, Pharm.D., has followed the plan for a year-and-a-half for weight loss. While he says it hasn’t been a magic bullet, combining the 16:8 regimen with healthy eating has helped him lose fat and maintain his weight. He adds that with the increased concentration at work that comes with skipping breakfast, he craves sugary snacks less frequently.

Janak also makes exercise a part of his diet plan. Horner emphasizes the importance of this, as well, say-ing that physical exertion increases production of neurons that we need to continually grow to make new memories. But fasting has been noted to keep those brain cells (and memories) alive. In fact, a laboratory mouse with Alzheimer’s disease that fasts tends to live two-and-a-half years longer, on average, than a mouse that eats normally.

As for healthy mice who fast, “If you put them in spatial learning and tasks, their hippocampus is bigger. It’s pretty provocative, I think,” Horner says.

But Horner explains that the boon comes not from fasting itself, but from flipping between two metabolic states. Some researchers call this concept “intermittent metabolic switching.” Authors of a 2018 paper published in Nature Reviews Neuroscience found that with fasting and exercise, ketones are produced with the depletion of the body’s fatty acids. Likely, humans evolved to thrive in a fasting state because those who could hunt successfully despite hunger lived longer. Basically, if you were built to function best with a pattern of switching between ketosis, followed by a flood of glucose that comes with eating and rest, you were best equipped to survive.

Still, Horner admits, “We don’t know how you get from A to B. When you’re in that ketone state, we don’t know why, but your brain functions better.”

What we do know is that too much fasting is harmful. “More fasting is not good,” Horner says. “There is this magic window.”

Fasting not for everyone

Not everyone should try fasting, either. Omar Jaber, M.D., a pediatrician affiliated with Baylor College of Medicine and Texas Children’s Hospital, warns that muscle cramping, dizziness and light-headedness can result from extended fasting. He adds that ancient Islamic laws exempt menstruating women, children, the elderly and the chronically ill from fasting during religiously prescribed times. Kizer agrees that patients who are recovering from surgery, pregnant, or dosing with insulin should probably stay away from fasting, but believes that overall, it is a very safe practice. “For most people, it would be fine,” she says.

Kizer is also quick to note that while longevity related to fasting has only been studied in mice, other evidence already suggests that fasting can increase longevity in humans, too. By losing body fat, she points out, you get yourself closer to the kind of healthy body weight that is noted among centenarians. The cell life in people whose bodies are stressed by factors such as excess weight is shorter than that in people who are healthfully slim. “That impacts longevity,” Kizer says.

Practitioners like Janak say it’s not difficult to simply stop eating at 8 p.m., then wait until noon the next day to break their fast. And if it means extra years of healthy old age, there’s little to get in the way of most people making intermittent fasting part of their lifestyle.