Bodies in Space: What Changes at the Cellular Level?

Bodies in Space: What Changes at the Cellular Level? 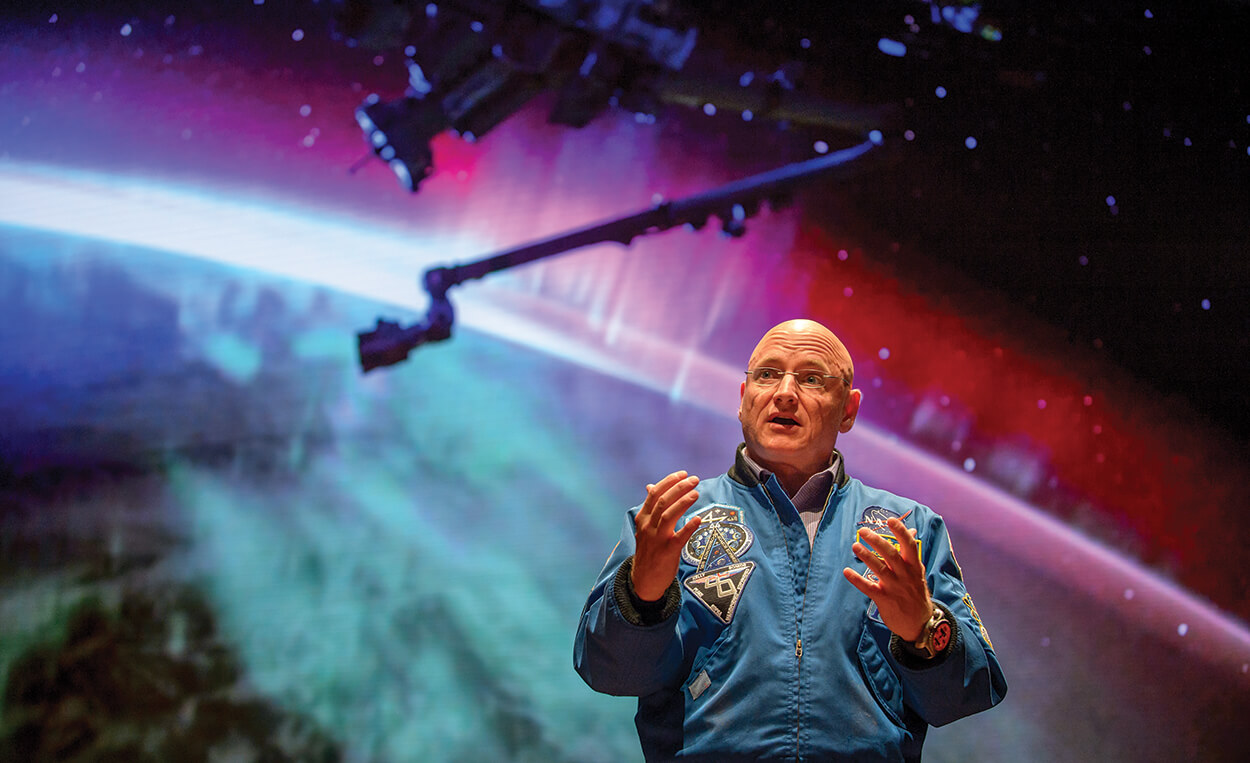 When former astronaut Scott Kelly spent a record-breaking year in space from March 2015 to March 2016, both he and his identical twin brother, Mark Kelly, provided multiple biological samples for research. Mark, also a retired astronaut, spent the duration of Scott’s journey Earth-bound, serving as an ideal control for NASA’s Twins Study, which aims to determine how living in space potentially impacts human health by comparing Scott’s genomic and molecular profiles to his brother’s.

Earlier this year, NASA teased preliminary findings from the study—among them a discovery that surprised the scientific community.

Data sets collected before, during and after Scott’s one-year mission aboard the International Space Station (ISS) indicated that his telomeres—protective, repetitive sequences of nucleotides found at the ends of chromosomes—were longer during spaceflight, a finding that was exactly the opposite of what researchers had predicted.

“It was a completely unexpected result,” said Susan Bailey, Ph.D., a professor of radiation cancer biology at Colorado State University and the principal investigator for the portion of the Twins Study focused on telomeres. “We went into the study hypothesizing that telomeres would shorten during spaceflight due to the extreme environment and stresses that astronauts experience on long-duration spaceflights.”

Often referred to as the “caps” of chromosomes, telomeres act as buffers to protect the genetic information that precedes them. More significantly, telomeres function as the aging clock in every cell, shortening with each cycle of cell division and so also with age, as well as with exposure to a variety of stresses and harmful exposures.

If Scott Kelly’s telomeres lengthened on the ISS, did that mean the aging process was somehow slowed or even arrested in space? 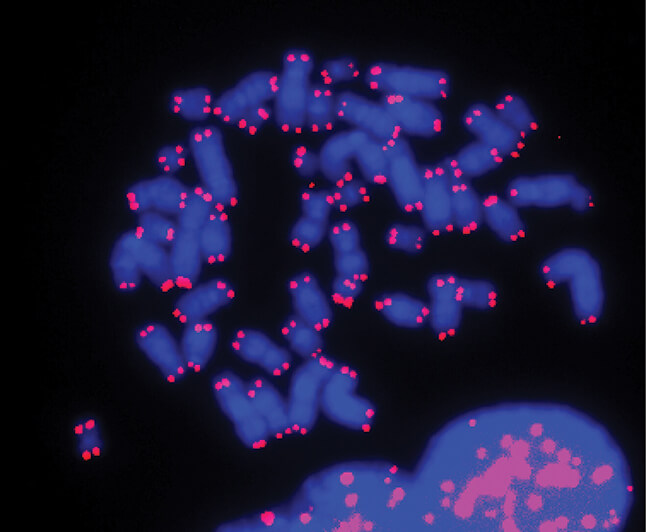 Telomeres, shown in pink, are nucleotides found at the ends of chromosomes that function as the aging clock in every cell. (Credit: ISM/Arturo Londono, medicalimages.com)

The effects of long-duration space travel on aging are unknown. However, given the unique exposures (including microgravity and space radiations) and the nutritional, psychological and physical stresses associated with spaceflight, it would be reasonable to assume that Scott’s telomeres would shorten during his year aboard the ISS.

“In space, our bodies succumb to the same sort of changes that occur with aging, but on a much faster timeframe,” explained Dorit Donoviel, Ph.D., director of the Translational Research Institute for Space Health at Baylor College of Medicine, which works with NASA to fund technologies aimed at preserving astronaut health and wellness during deep space exploration.

Donoviel recited a list of some of the effects of spaceflight that mimic aging, among them reduced muscle and bone mass, weakening of the heart, hardened arteries, balance problems and changes in vision, as well as damage from free radicals due to the radiation exposure.

“Telomere shortening underlies one of the major theories of aging,” Bailey said. “Telomeres shorten, cells stop dividing (they senesce), tissues degenerate and the pathologies of aging like cardiovascular disease and gray hair develop.”

Scott and Mark Kelly’s telomeres were similar in length at baseline when comparing the samples before Scott’s flight, Bailey explained, but not long after Scott’s arrival at the ISS, his telomeres were significantly longer.

“Of course, our biggest fear to start with was, ‘Is this an artifact?’ We wanted to be sure that what we were seeing was real,” Bailey said. “We used two independent means of measuring telomere length, and we had additional samples from another Twins Study investigator, as well as another study with an unrelated astronaut cohort in which we’ve been doing the same studies, and we see the very same thing with all of it. The exact same thing.”

In addition, studies with worms performed aboard the ISS for approximately two weeks found that space-flown worms had longer telomeres than Earth-bound worms, Bailey said.

As a result of these studies, researchers have begun to develop different theories about why telomeres would lengthen in space.

For one, astronauts live in a meticulously regulated environment (i.e., no margaritas, no DEET, no binge-watching Netflix). They exercise for hours almost every day, eat nutritious meals and have minimal distractions from a good night’s rest—all contributors to overall health, which helps maintain telomere length.

“Scott lost weight when he was on the station and had a very defined diet—he was like the model citizen—so all of those things could have contributed,” Bailey said. But, she added, she still struggles with how lifestyle factors could actually make telomeres elongate. After all, the worms did not change their diet, nor did they start exercising aboard the ISS.

Another theory suggests that telomerase—the enzyme responsible for adding length to telomeres and often found in cancer cells— is somehow switched on in space. If this is the case, Bailey said, increased risk of cancer would be a noteworthy concern.

“Cancer is a proliferative disease. Cells are growing like crazy, and you’ve got mutations and you’ve got long telomeres, and it’s all helping damaged cells continue to grow,” Bailey said. “If, in fact, we end up being able to link telomerase to any of this, you’ve enabled the very hallmarks of cancer.”

Because telomeres are associated with aging, some have proposed that by activating telomerase, individuals could potentially slow down or even stop the aging process altogether. When NASA’s preliminary findings came out, some even asked whether living in space was the fountain of youth.

“That’s always the case with any of these things, where people think they can live forever by turning on telomerase or making telomeres longer,” Bailey said. “There’s always a price to pay for that, and the price is that you are increasing risk of cancer, because that’s exactly what cancer does.”

Unfortunately, Bailey and her team were unable to analyze telomerase activity directly in their samples—the enzyme was likely destroyed by heat in the return vehicle, or otherwise unavoidably inactivated before reaching Johnson Space Center—so its part in the phenomenon remains unknown, for now.

Next steps: sort the cells

Yet another theory for the change in telomere length in space has been offered, one that many researchers believe is most likely: that individual telomeres did not lengthen at all, but rather spaceflight triggered a shift in cell population dynamics and the types of cells most present in the blood during spaceflight have longer telomeres, resulting in the appearance of telomere elongation overall.

“Perhaps we’re just looking at different cells,” Bailey said. “We’re looking at blood, which is being continuously exposed to low doses of radiation, sensitive lymphocytes are dying, so the body may be triggering a wound-healing or a damage response, mobilizing stem cells to replenish the population, and perhaps that whole process is accelerated during spaceflight. You’d have more stem, progenitor-type cells in the blood than you would normally, and those cells are going to have longer telomeres.”

Penelope Bonnen, Ph.D., associate professor of molecular and human genetics at Baylor College of Medicine and the special advisor to the NASA Human Research Program, proposed essentially the same theory.

“What if it’s not that the telomere length changed, it’s that the population of cells that were ascertained changed, and those cell types have longer telomeres, regardless of whether they’re in space or on Earth,” Bonnen said. She added that her hypothesis is based on known changes to the immune system that take place in space.

“Someone who is studying telomere length may not also be studying immunology, but in this case, it’s perfectly plausible that the results that were achieved with that set of experiments really are giving us more insight into what’s happening with immunology and the population of cells in the blood during spaceflight than it actually tells us about telomeres,” Bonnen explained. “Telomeres may just be a signpost that says, ‘Hey guys, it’s not that we’re changing, it’s that you’re actually looking at a different population of cells, and that understanding what’s happening with the immune system is really what’s important.’”

Both Bailey and Bonnen said that the next steps should be to sort the cells and measure telomere length in each specific cell type. This will help determine if, in fact, there is a shift in telomere length or in cell populations in space. And while the data ultimately raises more questions than it answers, both said the study has been invaluable for the advancement of the field.

“The Twins Study has been the most comprehensive view that we have yet of what happens to one human’s health in an extended spaceflight,” Bonnen said. “It’s a beginning. It’s a starting point—a place to begin to understand what’s happening biologically. And I think there is an opportunity to combine expertise across disciplines to help answer these questions.”

“It’s laying the foundation for the kinds of things we need to be thinking about and aware of as astronauts spend longer and longer periods of time, deeper and deeper in space,” she said.

These experiments will be increasingly important as NASA continues to set its sights on long-duration space exploration and a mission to Mars—goals Donoviel is confident will be achieved.

“I think the most remarkable finding is that we have lived in zero gravity for decades, and humans have adapted just fine to it,” she said. “They didn’t know that in the sixties. They had no idea if people could breathe, live, eat, shower—do everything normally. Yes, there are some changes, but I find it very remarkable that humans are able to adapt to an environment that lacks gravity. For me, it’s a positive story in that we are so resilient, we’re able to adapt to all kinds of harsh environments, including space, and I have no doubt that humans will be able to have successful exploration of deep space, and live and work well in space. I have no doubt that this will happen.”