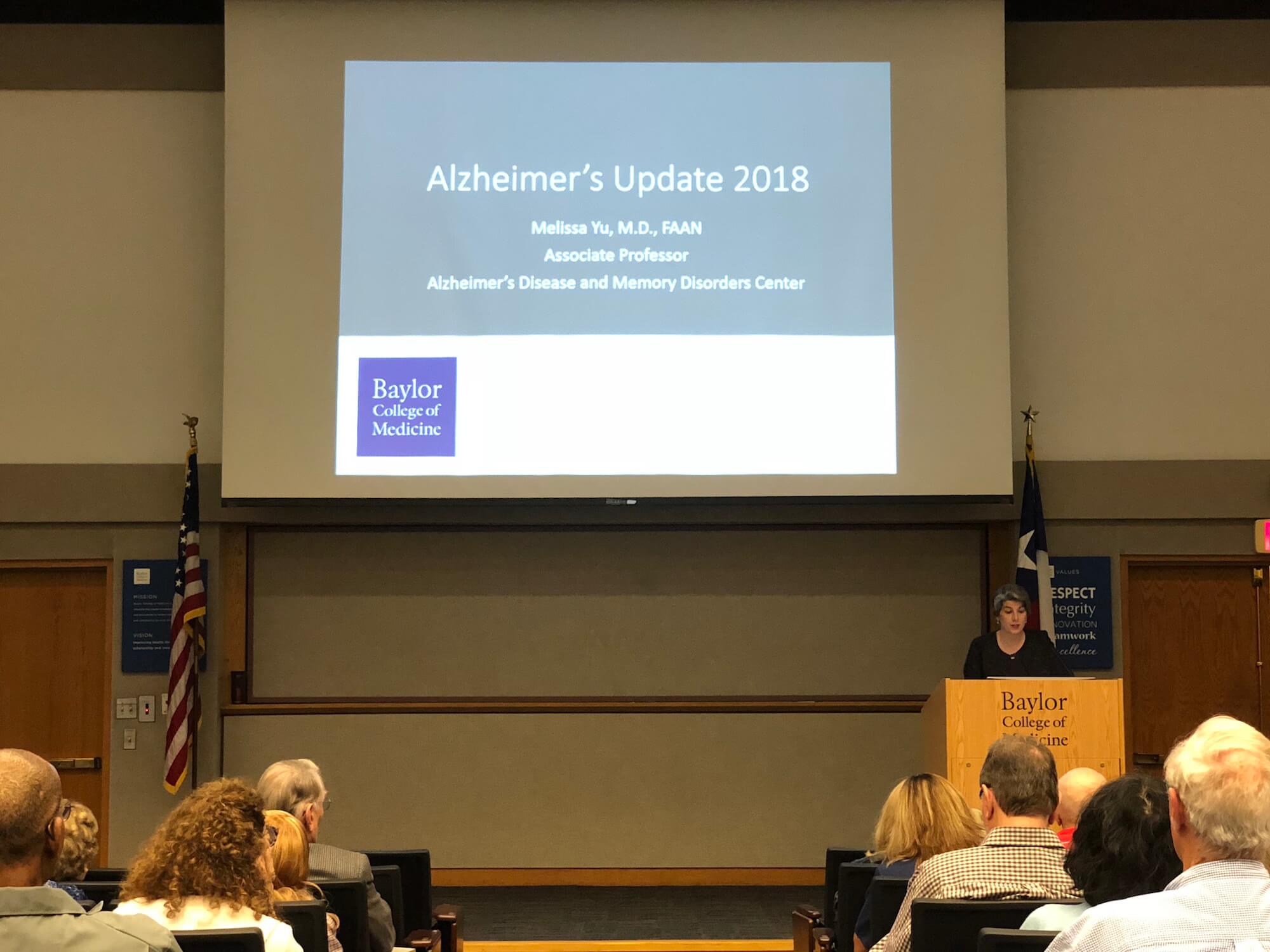 Baylor College of Medicine co-hosted its annual “Update on Alzheimer’s Disease” on Nov. 8 in partnership with the Alzheimer’s Association Houston & Southeast Texas Chapter to share the latest in Alzheimer’s research with patients and caregivers.

“This is really the center of our community as we gather and talk about various issues of the day,” Dan Baird, chair-elect of the Alzheimer’s Association Houston & Southeast Texas Chapter, said during the event. “We’re very pleased and it’s very fitting that this serves as a forum for Alzheimer’s disease and the progress that has been made.”

Alzheimer’s is a degenerative brain disease that affects memory and mental functions. According to the Alzheimer’s Association, Alzheimer’s is the sixth leading cause of death in the country, with one in three seniors dying with the disease or dementia. There are currently 5.7 million Americans living with Alzheimer’s and the number of patients is expected to increase to nearly 14 million by 2050.

In one study,  “Multiscale Analysis of Independent Alzheimer’s Cohorts Finds Disruption of Molecular, Genetic, and Clinical Networks by Human Herpesvirus,” lead author Ben Readhead and his team found higher levels of human herpesvirus 6A (HHV-6A) and human herpesvirus 7 (HHV-7) in subjects with Alzheimer’s compared to virus-free subjects and discovered that the presence of these viruses affect brain cells, leading to an accelerated progression of the disease.

The second study, “Alzheimer’s Disease-Associated β-Amyloid Is Rapidly Seeded by Herpesviridae to Protect against Brain Infection,” found evidence that herpes virus in the brain may trigger the innate immune response to infection. The study showed that amino acids involved in Alzheimer’s disease progression, called beta-amyloid peptides, trap the herpes virus in the amyloid. Because the amyloids are in a sense protecting the brain by containing the virus, the brain automatically produces an army of amyloid to fight the virus. As a result, the build-up of amyloid between neurons disrupts cell communication and function.

Although the idea that an infection causes Alzheimer’s is a long-standing notion, there is not enough evidence to support this claim. But the studies have already made their way through the media and prompted people to wonder: Are anti-viral medications an effective approach to treat or reduce the risk of Alzheimer’s or dementia?

Melissa Yu, M.D., associate director of the Alzheimer’s Disease and Memory Disorders Center and associate professor of neurology at Baylor, said she has received a number of phone calls regarding anti-viral medications to prevent or treat Alzheimer’s.

“You can’t draw a line between herpes and Alzheimer’s. There’s a saying in medicine: ‘Correlation does not equal causation,’” Yu said. “An analogy of that is: If I’m in the room with you and there’s no one else in the room, and you knock over a vase and it breaks, it’s not because I made you do it. Just because we’re in the same room together, it doesn’t mean that one thing caused the other’s actions.”

The same concept applies to the link between herpes and Alzheimer’s, but “there may be some credence to that,” she said.

Yu offered a couple of reasons why and how anti-viral medications could work.

“Could herpes be entering the brain and the medication acting directly against the virus in the brain? Maybe when you have a viral infection and it creates a whole lot of inflammation, the medicine may have some anti-inflammatory property,” she said. “However, there is no data on the effect of anti-virals on those already suffering with dementia.”

More studies need to be conducted in this area to thoroughly understand the role infections—like herpes—play in Alzheimer’s and, therefore, develop a course of treatment.

“To treat this disease, it’s going to be a lot more like when you treat cancer and HIV,” said Joseph Kass, M.D., director of the Alzheimer’s Disease and Memory Disorders Center at Baylor. “It’s rare to find a cancer that you treat with only one drug. You treat with multiple kinds of therapies to target different mechanisms. The same with HIV. You don’t just use one mechanism. You actually attack the virus through different mechanisms. Probably, in the future, there will be these cocktails of medications.

Kass, also a professor of neurology, psychiatry and medical ethics at Baylor, concluded the event with a message of hope, although Alzheimer’s is a deeply painful disease that slowly robs patients of their memories and families of their loved ones.

“It’s very easy to be pessimistic about Alzheimer’s. When you’re in this field … it really does sometimes feel like you’re up against a losing battle every single time,” Kass said. “But we’re learning and will continue to learn that there are some reasons to be optimistic.”