"How do you want to experience your universe?” 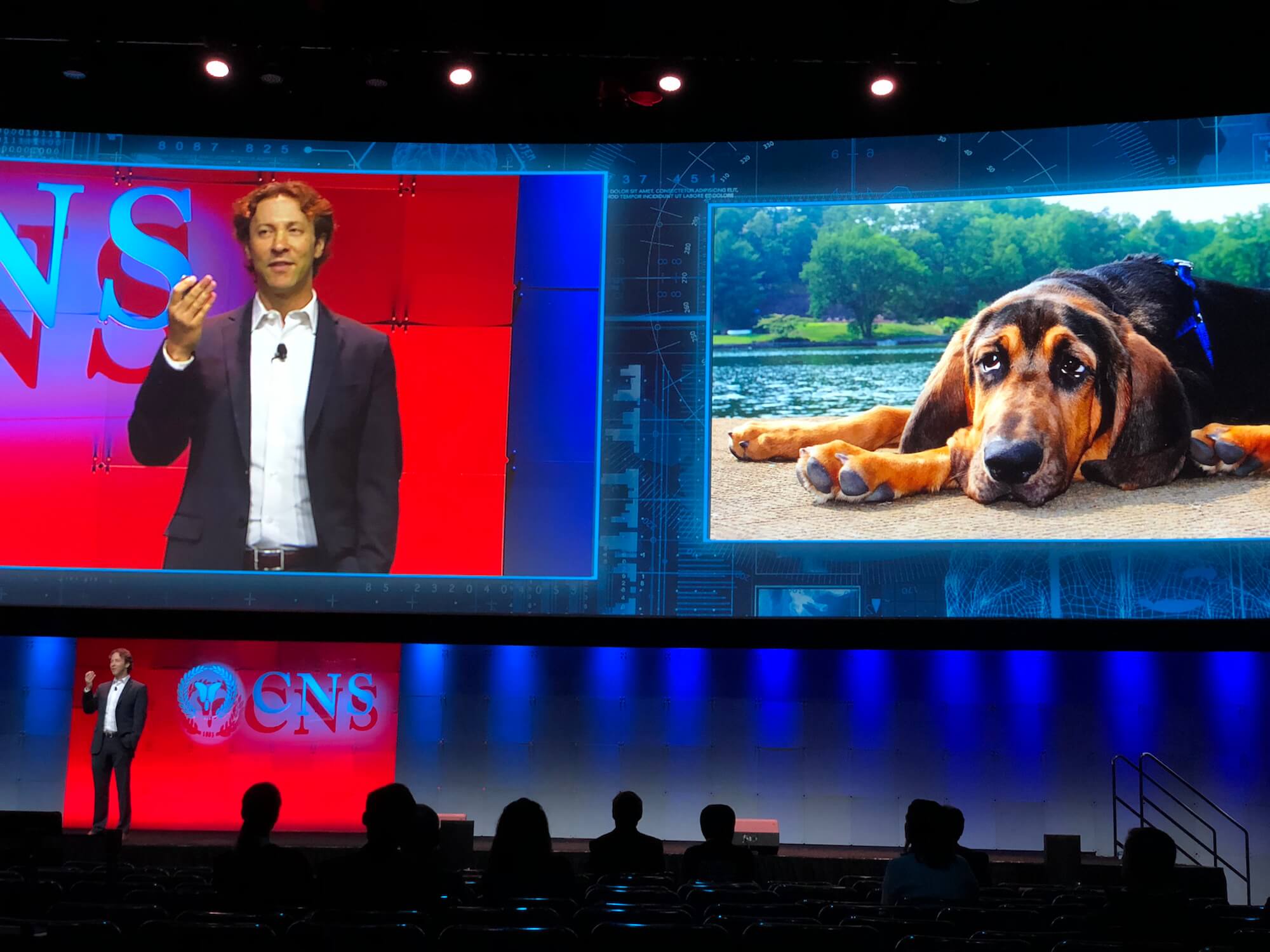 Pioneering neuroscientist David Eagleman, Ph.D., whose futurist innovation has been featured on HBO’s science fiction series “Westworld,” discussed how sensory immersion can expand people’s experiences and interactions during the Congress of Neurological Surgeons annual meeting this month in Houston.

“Your reality is constrained by your biology,” said Eagleman, an adjunct professor in the department of psychiatry & behavioral sciences at Stanford University. “I think this goes against the common sense notion that our eyes and our ears and our fingertips are just picking up the objective reality around us. Instead, we’re only sampling just a little bit of the world around us.”

Eagleman’s work focuses on how technology can expand people’s “umwelt”—the German word for an individual’s interaction with the surrounding world—and how that will change the experience of being human. For example, many deaf people have cochlear implants. The device captures sound through a microphone, digitizes those signals, converts them into electrical impulses and sends them to different regions of the auditory nerve.

“As recently as 25 years ago, a lot of people thought this would never work. Why? It’s because these devices are speaking the language of Silicon Valley. They’re not speaking exactly the same language as your natural, biological sense organs,” Eagleman said. “But the surprise turned out to be it didn’t matter. Your brain just figures out what to do with the information. … All that it’s experiencing is this inner world of 86 million neurons and lots of signals going on. But what the brain is really good at doing, of course, is extracting patterns and assigning meanings to those patterns and constructing this, your entire subjective world.”

If the brain is a musical instrument, neuroscientists and neurosurgeons are listening more to the music that’s being played. With this increase in capacity in terms of computational power and material science, they have a better understanding of the connectome—the wiring diagram of the brain—to launch them into the next frontier of neuroscience and restore function to patients.

“We’re not just looking at the structure of the brain—we’re looking at the physiology of the brain,” said Alexander A. Khalessi M.D., chair of the conference’s scientific program and neurological surgery chair at UC San Diego Health. “When you start to think about what people care about, people care about their subjective experience and all the things that go along with that—neurocognitive issues, psychiatry, restoration of function.”

Eagleman is focused on restoring senses by creating sensory substitutions, a non-invasive technique for bypassing the loss of one sense by feeding its information and signals through another sense.

In his lab, he developed a sensory substitute for deafness that captures sound and converts it into patterns of vibrations on a wearable vest. This haptic method of translating sound frequencies into vibrations felt on the body allows a deaf person to hear someone speaking and understand what was being said.

“Deaf people can learn to understand what’s happening here because it’s exactly what your inner ear is doing,” Eagleman said. “It’s capturing sound, breaking up the different frequencies, shipping that off to the brain. We’ve just transferred the inner ear to the torso.”

He also is developing a vest to assist the blind which takes the location of everything in the proximity of an individual and allows the wearer to feel—using vibrations—where other people are walking and where they are going. He and his team tested this technology at Google, where offices are set up with lidar. In a video shown during his presentation, a participant tested the vest to demonstrate how they could navigate through a room without sight.

The vest was featured recently on cable’s science fiction Western, “Westworld,” for which Eagleman serves as a scientific advisor.

In addition to the haptic vests that helps people “hear” and “see,” Eaglemen and his team are moving beyond hearing and visual challenges to prosthetic limbs. Currently, lower limb amputees outfitted with prosthetic legs often have difficulty learning how to walk because there are no sensations relayed to the brain. Eagleman is developing a way to not just replace senses that have broken in some way, but how to signal entirely new senses.

“We hooked up pressure and angle sensors into a prosthetic leg and then fed that in through the skin of the torso,” the neuroscientist said. “It’s essentially restoring some of that sensation. It’s just feeding it in to a different part of the body.”

Ultimately, Eagleman said he believes people will be able to select their own peripheral devices and shape their “umwelt.”

“We don’t have to wait for Mother Nature on her time scales to give us new devices,” he said. “Instead, like any good parent, what she has given us is the ability to go forward and to find our own trajectory. The question is: How do you want to experience your universe?”