Keeping His Heart in the Game

Keeping His Heart in the Game 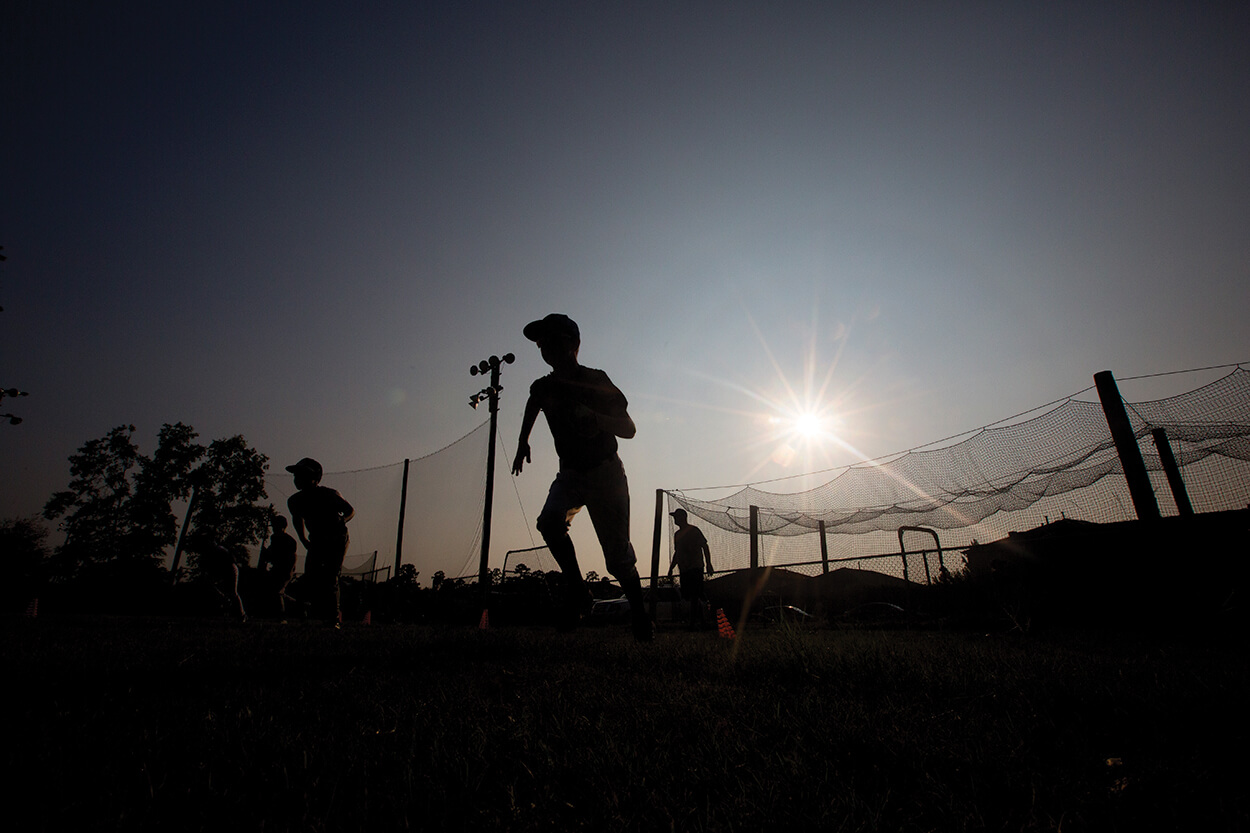 It’s a hot August night in Kingwood, a planned community in northeast Houston, and 8-year-old Ethan Page leaps effortlessly to catch a baseball. Without pause, he snaps the ball back to his coach.

“Ethan has the strongest arm on our team and I’m not just saying that,” said Brandon Kirk, assistant coach of the Dynasty, the competitive baseball team for which Ethan plays.

This boy is a natural athlete. Long and lean, Ethan stands a head taller than most of his teammates.

Watching him run, throw, catch and pitch, it’s hard to believe that not even one month prior, Ethan underwent a four-hour heart surgery to repair a ventricular septal defect (VSD)—a hole in the wall of the heart that separates the two lower chambers.

At birth, Ethan weighed 9 pounds 14.6 ounces—larger than the average newborn. After a difficult delivery at Houston Methodist Sugar Land Hospital, Julie Page and her husband, Brent, were told that their baby boy was born with a heart defect. A diagnosis at Texas Children’s Hospital later confirmed that Ethan had three VSDs in his heart.

“His VSDs were small enough at birth to not need to do anything about it immediately,” Julie said. “We’ve always been told that a lot of VSDs close naturally over time and that his weren’t considered to be large—they were small to medium.”

But when Ethan began having trouble breathing at baseball practice, the Page family knew surgery would be imminent.

“He is just so healthy and active, so anyone you would tell he had a hole in his heart, they were shocked,” Julie said.

Ethan was nervous about surgery, but eager to get it behind him. His only stipulation was that it not interfere with baseball. He didn’t want to miss the Nations Baseball 9U and 10U World Series, held in San Marcos, Texas in early July.

As fate would have it, a surgeon specializing in a minimally invasive technique to repair congenital heart defects—a technique that offers a reduced recovery time—was headed to Houston, just in time for a break in Ethan’s vigorous schedule. This surgeon avoids traditional open heart surgery, which involves making a long vertical incision down the sternum and cracking the sternum to gain access to the organ—in favor of a small incision under the right arm.

Ali Dodge-Khatami, M.D., Ph.D., an Iranian-born surgeon who was raised and trained in Switzerland, arrived in Houston in July—right after the Nations Baseball World Series and just before fall tryouts. Dodge-Khatami is director of pediatric heart surgery at McGovern Medical School at The University of Texas Health Science Center at Houston (UTHealth) and an attending pediatric cardiovascular surgeon at the Children’s Heart Center at Children’s Memorial Hermann Hospital.

“We were presented with three options that would have been possibilities to repair the hole,” Julie said. “One would have been to have a heart catheter through the groin, which is an overnight procedure—done and done. The second was a method through the armpit—the right axillary thoracotomy. Or, the third, through the chest.”

Ethan did not have the proper amount of tissue to qualify for the heart catheter through the groin. Ultimately, the Page family chose the right axillary thoracotomy.

A window to the heart

A right axillary thoracotomy for transatrial repair of congenital heart defects
is a highly uncommon approach in pediatric cardiology in the United States today. Dodge-Khatami is one of a handful of doctors in the country doing this surgery, according to administrators at Children’s Memorial Hermann.

“What will happen over time is, people will train on this, expand it and then people will be in a fellowship program for congenital heart surgery and they will learn how to do it,” said Kevin P. Lally, M.D., surgeon-in-chief, Children’s Memorial Hermann Hospital, and chair of the department of pediatric surgery at McGovern Medical School at UTHealth. “I am confident that for certain operations, this will clearly be the approach, but it will take a while.”

Dodge-Khatami begins by making a roughly four-inch incision (depending on the size of the patient) down the right side of the chest, underneath the armpit. Once the incision is made, he separates two ribs—the third and fourth or the fourth and fifth—with a chest-spreader. “Entering on the right side places you at a bit of a distance away from the heart,” Dodge-Khatami said. “It gives you less room to operate in, so there is definitely a learning curve to this.”

Once he separates the patient’s ribs, Dodge-Khatami pushes through layers of muscle and tissue, passing the lungs to eventually reach the heart.

“What everybody has in between two ribs is muscles,” he explained. “You do have to cut one muscle, which you put back together at the end … You don’t actually cut the middle of the muscle. Whenever you cut perpendicularly through a muscle, even when you suture it up at the end, that muscle doesn’t have the same function or strength as it otherwise would, so what we try to do are muscle-sparing incisions.”

Keeping cuts to a minimum—spreading muscles as opposed to clipping muscles on the way to the heart—offers huge benefits for his patients.

“To get to the heart, there are various layers of muscles that all of us have in shoulders and back, and we don’t cut them, either,” Dodge-Khatami said. “We spread them apart so we are able to enter the chest in an area where we are not actually cutting muscle. That helps the kids recover more quickly and they can move their shoulders and they can move their back muscles.”

The minimally-invasive surgery takes a little bit longer to perform than an open-heart procedure to repair a VSD, but Dodge-Khatami said it reduces the recovery time for patients and leaves a far less visible scar.

“Ultimately, the one or two days less in the hospital, or the 30 or 40 minutes extra that it takes to do the operation, in the lifetime of a kid, probably doesn’t mean much,” Dodge-Khatami said. “But what it means to them 10 or 15 years from now is where I would anticipate the huge benefit to be. They won’t think of themselves as heart patients.”

Dodge-Khatami began doing this procedure in the early 2000s and has performed it hundreds of times.

“When I started this with my boss in Zurich, I thought it was crazy … because it is technically more challenging,” he said. “It takes more time to do in the beginning when you are learning. You have to be more careful with certain things because there is not a lot of margin of error. In time, when you get comfortable with it, you eliminate that risk and it shouldn’t be any riskier than what we do up front. I think that is part of the reason it is not as widespread as it could be.”

Although the procedure is uncommon now, a right axillary thoracotomy was a method of entry for cardiology pioneers 70 years ago.

“The right thoracotomy approach, historically, if you go back, is one of the initial approaches surgeons used in the ’40s and ’50s,” Dodge-Khatami explained. “At a time when we still didn’t have the heart-lung machine, some of the more primitive repairs—closed valve repairs—were done through this approach.”

By the mid-1950s, the cardiopulmonary bypass pump, commonly known as the heart-lung machine, had revolutionized cardiac care by temporarily taking over the function of the heart and lungs during surgery. Because so many tubes are needed to connect a patient to the heart-lung machine, surgeons began to approach the heart through the front of the chest rather than the side, Dodge- Khatami said.

“You can access every single part of the heart and the vessels in order to use the heart-lung machine through the front, so it just became commonplace,” he said. “Slowly, the right chest approach was abandoned.”

A study by Chinese researchers published in the Journal of Cardiothoracic Surgery in May 2018 compared three different procedures to repair VSDs. The authors found that right vertical infra-axillary thoracotomy and right submammary thoracotomy (an incision under the right breast) delivered better cosmetic results for patients with isolated VSDs than the conventional median sternotomy approach (a long vertical incision down the center of the chest, after which the sternum is cracked open). Authors of the study also concluded that, for children, the right vertical infra-axillary thoracotomy “may be a better choice” because the incision under the armpit makes the scar almost invisible and the incision site does not interfere with the development of the chest wall.

Still, the procedure has a long way to go to gain widespread acceptance.

“It really is the minority of us who feel comfortable or feel that it is the right thing to do a thoracotomy when there is a ventricular septal defect,” said Luca Vricella, M.D., chief of pediatric heart transplantation at Johns Hopkins Medicine as well as the director of pediatric cardiac surgery. “But having said that, if the results are good, and the incision is small, you can’t complain. And maybe it is something we should embrace in the community.”

Reaching for the big leagues

Four days after surgery, Ethan was discharged from Children’s Memorial Hermann. He walked out of the hospital on his own.

“When I woke up from the surgery, it felt like someone was punching me or stabbing me,” Ethan recalled, a few days into recuperation. “But I’m feeling better now. I’ve been playing the Wii and talking with my friends.”

One month post-surgery, Ethan returned to the baseball field.

“At my first practice back, I was kind of worried if I stretched too far that my stitches would break,” he said. “But after that, it was fine and I haven’t been in too much pain.”

His coaches weren’t pushing him too hard, but after that first practice, Ethan told his mom he was done with that.

“They were very patient and understanding,” Julie explained. “They said
he could sit out or take it easy. After his four-week checkup, Ethan told me to text his coaches to tell them, ‘Don’t take it easy on me!’”

Just after Labor Day, Ethan played his first game of the season with the Dynasty. He helped lead the team to a 13-2 victory by striking out four players. When he grows up, he wants to follow in the footsteps of his favorite Astros player, George Springer, and compete in Major League Baseball (MLB). He already knows how he will give back once he becomes famous: he’s going to visit patients at Children’s Memorial Hermann.

“When I play in the MLB, I want to come back and visit the kids here and give them my money,” Ethan said.