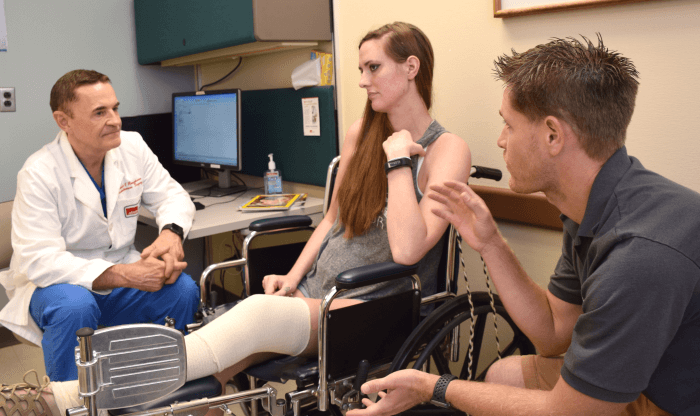 Blood clots are a serious issue for pregnant women, said Dr. Patrick Roughneen, professor of Cardiothoracic Surgery at The University of Texas Medical Branch at Galveston.

Natalie Beriault was eight months pregnant the night it felt like her heart suddenly stopped before lurching back into action.

Beriault, 27, was at her home in Lumberton, Texas by herself. She had been lying in bed most of the day when suddenly she had trouble breathing and thought she was going to faint.

It was just anxiety, she told herself. Her boyfriend was away on business so Beriault called a friend to come over. Beriault was worried that if she went to the emergency room it would turn out to be nothing and she’d be stuck with a large medical bill.

“I was just looking for any excuse because I didn’t want to go to the hospital,” Beriault said.

Going to the hospital is exactly what Beriault should have done. After she noticed her fingers and lips started turning blue she did visit her local emergency room where doctors told Beriault she had a pulmonary embolism. A blood clot had traveled from somewhere else in her body up to her lung preventing her from breathing.

Pregnant women are at a higher risk of blood clots. A pregnant woman’s blood clots more easily to help lessen blood loss during birth but that also means some pregnant women may develop a blood clot at some point during their pregnancy, childbirth or even up to about three months after delivery, according to the Centers for Disease Control.

About one or two women in 1,000 are affected by blood clots, according to the American Pregnancy Association.
Blood clots are a serious issue for pregnant women, said Dr. Patrick Roughneen, professor of Cardiothoracic Surgery at UTMB and part of the team of health care providers who helped treat Beriault.

Pregnant women should be aware of symptoms such as shortness of breath, blue discoloration around the lips, leg or chest pain, and leg swelling.

A blood clot that develops in the legs or arms can break off and travel to the lungs causing a pulmonary embolism.

That is exactly what happened to Beriault and it can be a dangerous and life threatening situation, said Roughneen.
The pulmonary embolism was so extensive that there was no meaningful blood flow to Beriault’s lungs, Roughneen said.

“Not nearly enough to sustain life,” he said.

It took about four hours from when Beriault started feeling short of breath to when she made it to UTMB. When doctors first tried to remove the blood clot, Beriault went into cardiac arrest and essentially died on the operating table.

After CPR was administered, Beriault was hooked up to an extracorporeal membrane oxygenation machine, or ECMO. The machine takes over for the lungs, oxygenating the patient’s blood as it runs through the machine. UTMB is one of only six hospitals in the Houston region with an ECMO machine and is an Extracorporeal Life Support Organization Center of Excellence.

Beriault would then spend a week in a coma and while the medical professionals at UTMB were able to save her life,

Beriault lost her son, who she was going to name Carter.

Beriault is currently undergoing physical rehabilitation and she and her now fiancé hope to get married and start a family in the near future. However, Beriault hopes other women can learn from her story.

“Don’t second guess it,” Beriault said. “If you have these symptoms, go to the doctor. It is not worth losing your life. You don’t want to go through what I went through.”