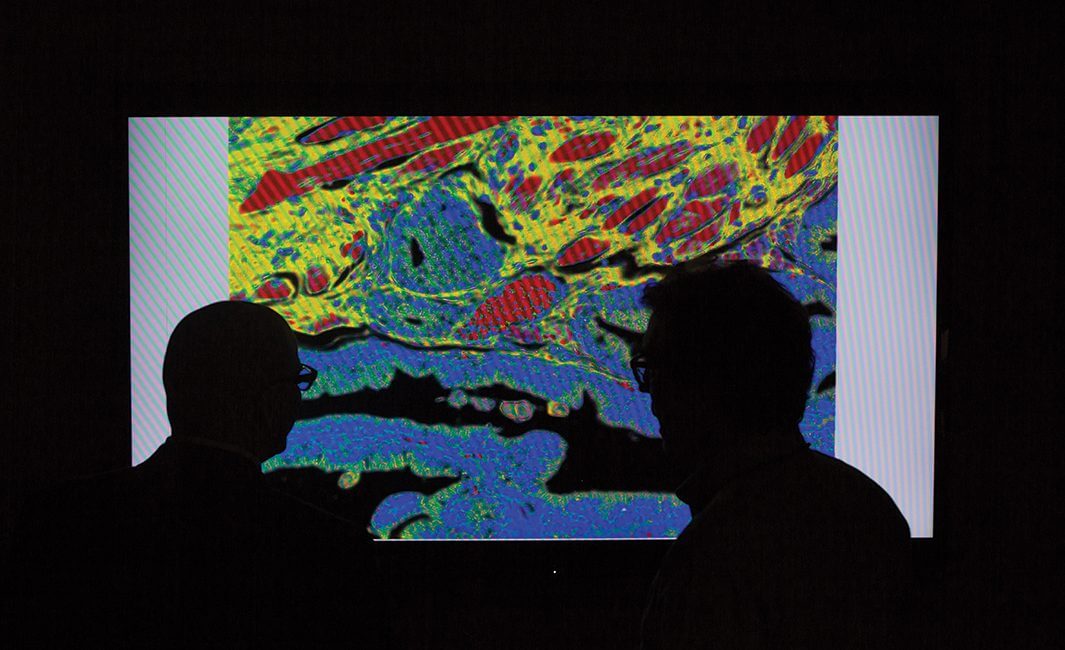 Pathologists have been looking at body tissue samples under microscopes for centuries, but the digital age is bringing innovation and understanding beyond the human eye and mind to the study of diseases.

Digital pathology takes the glass slide into the 21st century by switching the physical to an environment that scans, manages and interprets biological information as computer images.

The field wasn’t much of a reality in the United States until 2017, when the U.S. Food and Drug Administration (FDA) approved the Philips IntelliSite Pathology Solution. The automated digital system allows users to create, view, manage and interpret digital slides prepared from biopsied tissue.

This technology marked the beginning of pathology’s domestic conversion from microscope to digital imaging, said Gustavo Ayala, M.D., professor and vice chair for outreach in the division of urologic pathology at McGovern Medical School at The University of Texas Health Science Center at Houston (UTHealth).

Now, with a reliable system, Ayala said, The University of Texas System plans to outfit each of its Texas Medical Center institutions—UTHealth, MD Anderson Cancer Center and UTMB Health in Galveston—with a Philips IntelliSite Pathology Solution.

Ayala already uses digital pathology as part of a U.S. Department of Defense grant. One of Ayala’s co-collaborators is Michael Ittmann, M.D., Ph.D., professor of pathology at Baylor College of Medicine and director of the human tissue acquisition and pathology shared resource at the Dan L Duncan Comprehensive Cancer Center. The pair have conducted research together for more than two decades.

The federal money has supported work to image and analyze the environmental differences of prostate cancer’s stroma—or cell framework—with a focus on African American males. Digital pathology can help solve the mystery of how to prevent and address more aggressive forms of prostate cancer that are more prevalent and deadly in this population.

“With the digital images, we have prepared an algorithm to quantitate the active stroma, so we can readily integrate it into a treatment, but it needs to be validated first,” Ittmann said.

Pathologists recognize patterns and then predict the behavior of diseases.

Digital technology offers an advantage over slides, which can break, get lost and deliver images that are difficult to share with colleagues for second opinions, he said.

Ayala anticipates imaging will advance the current standard of assigning grades and stages to cancer tumors, which was developed six decades ago.

“We have started to embrace technology—not to replace pathologists, but to make them better,” said Ayala, also a distinguished chair in pathology and laboratory medicine at McGovern Medical School.

Pathologists are good at diagnosing, he explained, but when it comes to counting and predicting certain behaviors, there are some things the human mind doesn’t do as well as a computer.

“Computers can help us count,” Ayala added. “They can also take a picture of tissue at every nanometer of the spectrum.”

Though the Philips device is advancing pathology, there are kinks in the system that still need to be worked out, said Liron Pantanowitz, M.D., professor of pathology and biomedical informatics and vice chairman for pathology informatics at the University of Pittsburgh Medical Center.

Challenges include workflow issues. For example, not everything can be scanned, which requires some pathologists to employ a hybrid of digital images and traditional slides. In addition, the FDA’s current approval is for one kind of scan and there is currently just one imaging software, said Pantanowitz, who publishes and lectures frequently about digital pathology.

“We’ve made a lot of progress,” he said. “The FDA is already primed to expect future studies, and it is loosening up on that. There will also probably be more products available in the future that will be less costly and faster to use. It’s new territory that we are embracing, but it is going to take time.”

Meanwhile, pathologists are adding other new methods to their research repertoire by teaching computers to learn different patterns of disease.

That will allow pathologists who want to examine malignant cancer cells in an organ to program the computer to recognize the cancer with a certain degree of clarity and dependability.

This enables medical professionals to examine the cancer and see the receptors in every nucleus in the stroma, Ayala said. With that richness of data, there is better information.

In the future, digital pathology could be used for other tests beyond cancer, such as Pap smears, Ayala added.

“Pathology is not going to be replaced by the computer, but it is a powerful adjunct,” Ittmann said. “We are not sure we can teach a computer to see everything, as there are hundreds of alterations in tissue, but in 10 to 20 years, we are going to see this breakthrough.”

As pathology moves through the digital age, imaging will become the norm, experts predict.

Ittmann said an early victory arrived as a byproduct of The Cancer Genome Atlas, a decade-long, $300 million project funded by the National Institutes of Health that collected tissue samples from more than 11,000 patients and completed a genomic analysis of 33 cancers this year.