BioBridge partnership between the TMC and the UK

BioBridge partnership between the TMC and the UK

I recently traveled to London and, together with United Kingdom government and research leadership, announced a BioBridge partnership between the Texas Medical Center and the UK. This unique collaboration is a testament to the Texas Medical Center (TMC) and the UK’s commitment to fostering the cross-pollination of ideas and innovation in the life sciences to accelerate discovery.

What, exactly, does this partnership mean? First, it solves a key challenge facing early stage companies. Those startups require a great deal of nurturing and support, and that’s especially true when they expand beyond their home country into new markets. The BioBridge aligns the life science startup communities across the UK with the TMC Innovation Institute. UK-based companies are now able to house themselves at the TMC and tap into our network of investors and experts. And the reverse is true, too: startups housed here at the TMC now will have an access point into the UK. The BioBridge serves as a mutual port of entry, where startups can establish a base and learn the regulatory nuances of a new market while building key relationships. 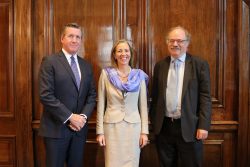 Second, the BioBridge aligns leading UK institutions, including Cambridge University, Oxford University, Manchester University and the University of Leeds, with the leadership of the Texas Medical Center. Researchers from both countries will collaborate on a range of projects, including the development and advancement of genomics and cancer treatments. For example, researchers are developing ways to use artificial intelligence to target treatments based on an individual’s distinctive genomic profile.

It was exciting to see the genuine support and enthusiasm from UK partners, including Baroness Rona Fairhead, UK Minister of State for the Department of International Trade; and Sir Mark Walport, chief executive of UK Research Innovation, a government funding agency; along with leaders of some of the most prestigious universities in the United Kingdom and the Texas Medical Center.

Importantly, we don’t see this as a one-time partnership. We’ve established a BioBridge with Australia, as well, and we expect to develop more of these types of relationships as we continue to advance the Texas Medical Center’s role as an international leader—and partner—in the life sciences.

Our BioBridge partnership is designed to share knowledge, technologies and insights to leverage our collective capabilities to develop treatments faster. We are united in our passion and dedication for improving the health of humanity.