Back from the dead: How one man survived sudden death syndrome

Back from the dead: How one man survived sudden death syndrome 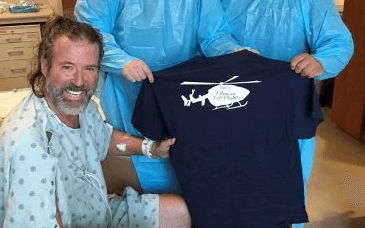 Karl Wiggins was driving his 82-year-old mother to their local Walmart in Liberty, Texas, on March 12, 2018, when his hands dropped suddenly from the wheel. His head slumped forward, but his eyes remained open and blankly staring.

“It wasn’t something profound and metaphysical or some religious, life-altering experience. It wasn’t like that at all,” said Wiggins, who had turned 54 three days earlier. “It wasn’t even like a dream state. I was just out. I was just gone. I was clinically dead. … I was just out like a light.”

Wiggins had an encounter with sudden cardiac death.

When he became unresponsive, his mother grabbed the wheel to keep the vehicle from swerving out of control. A motorist behind them noticed the struggle. She chased them on foot, jumped in the car and managed to engage the brakes. She also called 911.

Detective Joel Davila of the Liberty Police Department, a few blocks from the incident, responded to the emergency call and sped toward Wiggins.

“By the time [Davila] got there, he said I was completely blue already. He pulled me out of the car and laid me on the street,” Wiggins said. “If it hadn’t been for him, I’d probably be dead. If he had been 30 seconds or a minute late, I’m sure I would have suffered oxygen deprivation and brain damage.”

Davila and another passerby gave Wiggins chest compressions while they waited for paramedics to transport him to Liberty Dayton Regional Medical Center. An hour after arriving at the hospital, he was transferred via Life Flight to Memorial Hermann-TMC, where sudden cardiac death struck him again.

Doctors revived him, but they couldn’t figure out what was causing Wiggins, who had no medical history of health problems, to experience abnormal heart rhythms.

“When we see Brugada cases, we’re fascinated by the diagnosis and we always want to confirm. Once we establish a Brugada pattern or Brugada syndrome in a patient, there’s a long list of do’s and don’ts,” said Mukerji, who also is an assistant professor of cardiac electrophysiology at UTHealth’s McGovern Medical School. “We have to make sure the patient gets the right kind of care.”

The condition, also known as sudden unexplained nocturnal death syndrome or the “moaning death,” is commonly caused by a mutation in the SCN5A gene, which is responsible for forming sodium channels and maintaining normal heart rhythm by facilitating the transportation of positively charged sodium atoms into the heart muscle. This genetic mutation effectively changes the structure and function of the sodium channel, which causes arrhythmias. If left untreated, Brugada syndrome can lead to fainting, seizures, difficulty breathing or death.

According to the National Institutes of Health, an estimated 5 in 10,000 people around the world are affected by this syndrome. Men of Southeast Asian descent are more susceptible to the condition than other populations.

Because of its rarity, Brugada syndrome remains shrouded in mystery.

“Right from the get go, [Wiggins] is not the prototypical patient. His presentation is so different than what’s described,” Mukerji said. “I have no explanation for why that happened. There are lots of unanswered questions.”

While there is no cure for Brugada syndrome, the main treatment is an implantable cardioverter-defibrillator that monitors heart rhythms and shocks the heart during malfunctions.

Wiggins was diagnosed as clinically dead three times—twice in the field and once in the hospital—but Mukerji said he suspects there were more episodes.

Nonetheless, Wiggins said his multiple run-ins with death haven’t changed him. The United Airlines employee continues to embark on new adventures, just as he did prior to his diagnosis.

“In the last three months, I’ve been to five different countries, stomped around the jungles in Central America and climbed some Mayan pyramids,” he said. “But I was doing those types of things beforehand.”

This experience has only reaffirmed his “fatalistic attitude toward life,” he added.

“We’re all just a heartbeat and a breath away from death. Life is ephemeral and very fragile,” Wiggins said. “I don’t believe in any afterlife. Now I’m even more convinced since I was clinically dead twice that day and didn’t experience anything. I’m not afraid of death either, especially having experienced it. It’s not an unpleasant experience. It’s not an experience at all.”