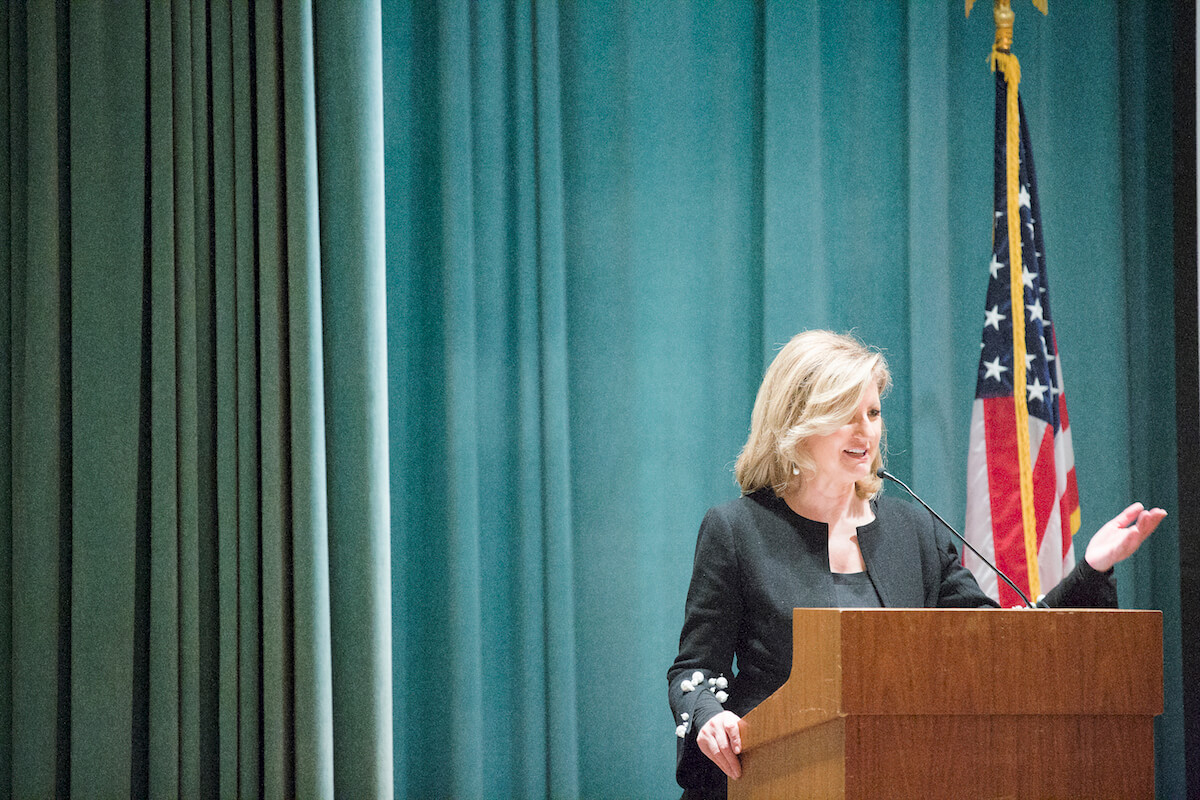 The Center on Aging opened in 1988 after a generous donation from natural gas entrepreneur Roy M. Huffington and his wife, Phyllis Gough Huffington. They are the late parents of Michael Huffington—the speaker’s former husband. The center aims to fulfill the unmet needs of seniors while conducting research to better understand why and how we age.

“That honoring of old age and what older people bring to the family, to communities, to the world in terms of wisdom, understanding life is so key,” Arianna Huffington told the audience on Oct. 17, 2018. “The essence of the center which is not just to prolong life, but to prolong the health span so we don’t just survive, but we thrive.”

Huffington, a celebrated author of 15 books who co-founded The Huffington Post—a news and opinion website now known as HuffPost—was inspired to become a writer by her father.

“My father was a passionate journalist and he really inspired me to be a writer first,” she said. “Two years ago, I started Thrive Global. It is all about how do we help people reduce the stress and burnout.”

Thrive focuses on the health and wellness of readers by encouraging new, healthy lifestyle choices.

“I think that right now, more and more people are looking for ways for journalism to add value to their lives,” Huffington said. “We are increasingly addicted to our devices and so what we do with Thrive is give people microsteps … small behavior changes they can make that would make them less stressed, more productive and healthier in leading their lives. I think what the Huffington Center for Aging is doing is also looking at: How can we live our lives in ways that are more sustainable? How can we reduce stress? How can we help our bodies’ immune systems by not being perpetually run down and burnt out?”

Huffington set her sights on reducing stress and burnout after a life-altering experience.

“I actually personally collapsed from exhaustion and burnout in 2007,” Huffington said. “I decided after that to look at this delusion that so many of us are suffering from, that in order to succeed we have to burn out, always be on, never rest and that is what led me to finally want to leave The Huffington Post and launch a dedicated site and business to help corporations and individuals to help them reduce stress and burnout.”

Huffington parted ways with The Huffington Post after a decade as its editor-in-chief to focus her energy on increasing the health span of Americans through Thrive Global.

Huffington believes there are many factors contributing to poor health as we age. One of the biggest, in her estimation, is the lack of sleep.

Stress and loneliness, she says, are also killers. Through partnerships with Baylor College of Medicine and other health care leaders, Huffington hopes to change the culture of health and wellness around the world.

“I’m absolutely delighted to be here to honor the work of the Huffington Center on Aging, to honor Roy and Phyllis and all of you here who are doing such amazing work,” Huffington said to the crowd gathered at the Junior League of Houston. “Part of the gift of aging for me is you have a greater sense of priorities and a greater sense of perspective and that is one of the things I love about getting older. The things that would have bothered me when I was younger, don’t bother me now.”