"Our Plant Based Journey" offers healthy options designed for everyone 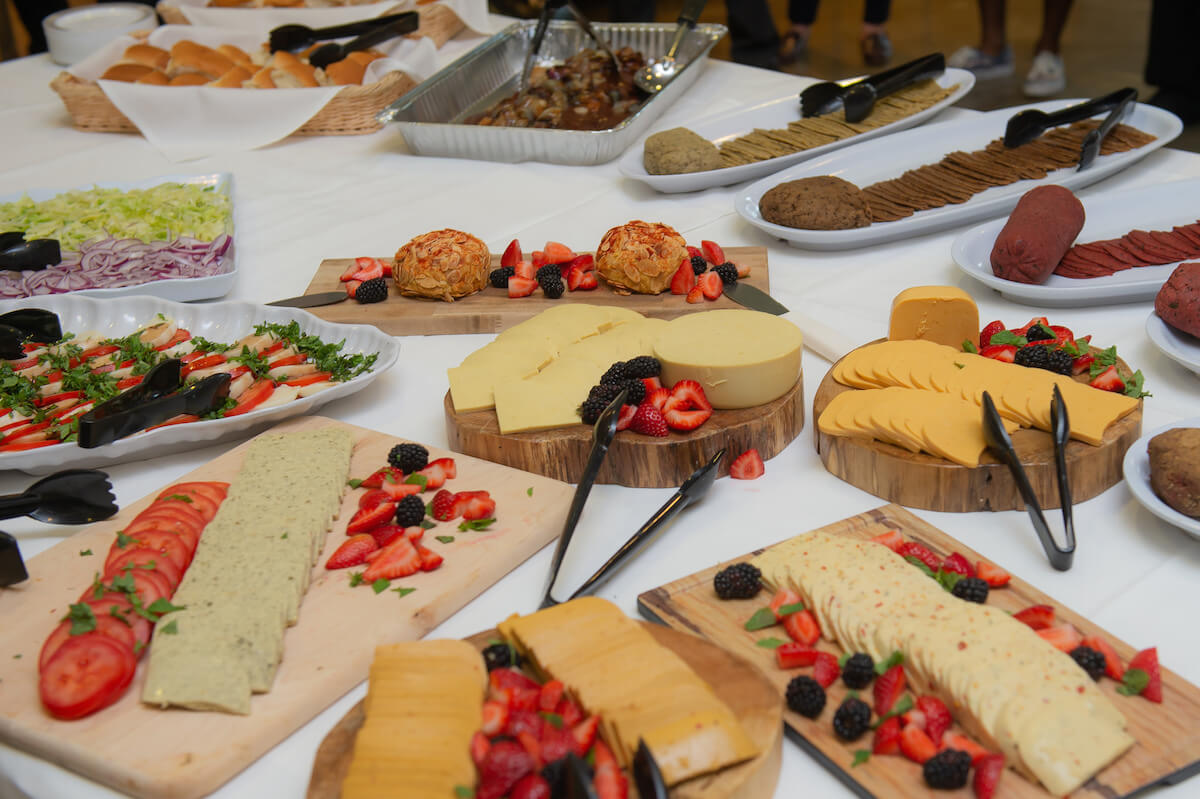 The slices of creamy cheese and chunks of luscious brisket now available to Rice University students become even more intriguing when their source is revealed.

Rice University’s Housing and Dining department unveiled new campus menu selections on Sept. 25, 2018 including a turkey and cheddar sandwich with mayonnaise and a Portobello sandwich with pesto and mozzarella paired with creamy coleslaw.

All were made entirely from plants.

Even more, the recipes for the “turkey,” “cheddar,” “mozzarella” and “mayonnaise” were created on campus and made from scratch.

“We do a lot of plant-based cuisine all over campus, but this is something, to our knowledge, that has never been done on any college campus,” said Susann Glenn, who manages communications for the university’s Housing and Dining department.

The meats, cheeses and dressings are part of a larger selection of plant-based charcuterie developed and perfected over the last year and a half by Senior Executive Chef Roger Elkhouri. Each item is vegan, meaning there is no inclusion of animal products. Elkhouri also has perfected the ingredients for a Reuben Sandwich, which traditionally includes corned beef, pastrami and Thousand Island dressing, as well as roast beef, dill Havarti, provolone and a paprika cheese ball. 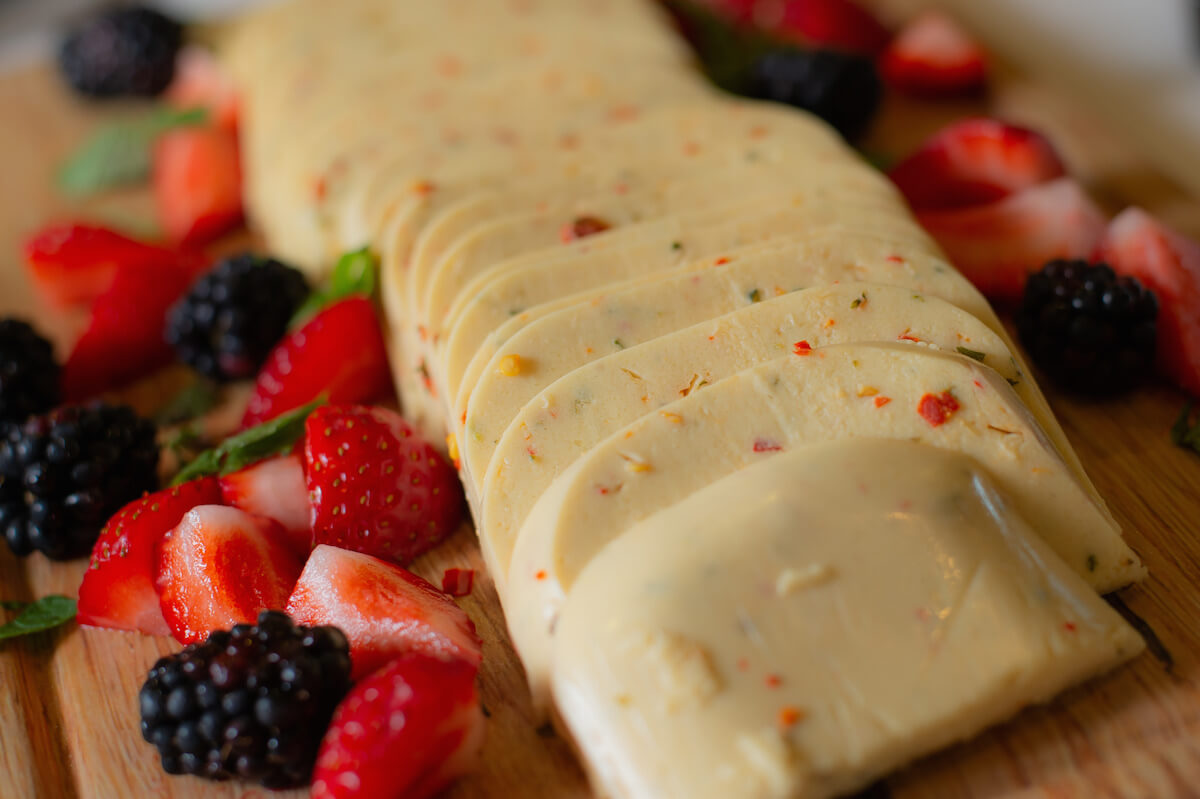 This is one of the many plant-based and dairy-free cheeses now offered by Rice University’s Housing and Dining department. (Credit: Jeff Fitlow, Rice University)

“Plant-based is the future, and we’re trying to anticipate all of that before anybody else,” said Elkhouri, who is affectionately known as “Chef Roger.”

Originally from Lebanon, he recalls meals during his upbringing centered around plant-based foods. He dislikes the “vegan” label, because plant-based eating is “designed for everyone,” he explained.

“This is just another healthy option for everybody,” he said. “This is not just for vegans. A couple of people came through the line today and said, ‘Oh, I want to eat meat,’ and I was like, ‘This is just plant-based.’ If I can get one of those guys to eat this just two times a week, that’s fine. It’s another healthy option that we can provide, because plant-based is very good for you. That’s it. We just want everybody to eat more of this.”

To achieve this goal, Chef Roger labored over perfecting each recipe, admitting that there were tears involved in the extremely challenging process. To mimic the taste and texture of meat and cheese, he hand-picked critical ingredients, including liquid smoke for flavor, coconut milk to add a hint of sweetness to some of the cheeses and the mayonnaise and wheat gluten-based plant proteins to help bind the ingredients along with various blends of seasonings.

He started with mozzarella, the real version which he already makes from scratch, so he knew how to aim for authentic taste and texture.

“We wanted it to look white, to have the texture of mozzarella—it’s a little salty, it has a fresh taste and it’s not dense and fermented like many other cheeses,” he explained. “So nothing fermented goes into this, but it took a while to develop. I made it the first time; it was like a rock. I made another version and it was like cotton. So it’s the texture, the color and the taste. It’s very, very challenging to do that.”

Another hurdle, self-imposed by Chef Roger, was avoiding the use of cashew milk, which is often a primary ingredient in vegan cheeses. That made balancing taste and sweetness difficult, but he wanted the food items to be accessible to everyone—including those with nut allergies. 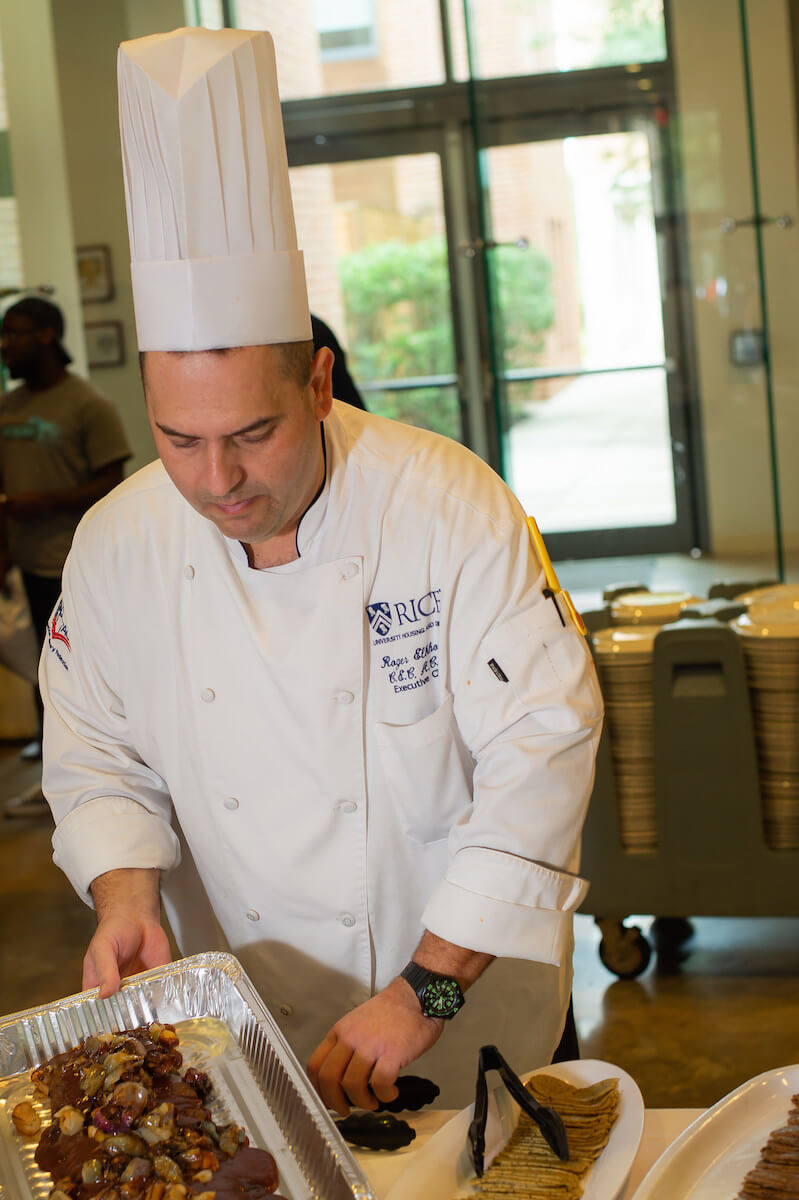 The charcuterie selection is part of a larger movement at Rice University to incorporate more plant-based options in the food offered on campus. Known as “Our Plant Based Journey,” the initiative aims to raise awareness about the environmental impact of the food industry, particularly regarding animal protein as well as the health benefits of eating more plants.

“We wanted to lessen our carbon footprint, because we know that animal proteins require more energy and consumption on the farm, on the grower, and on the environment,” Glenn said. “Our focus is to have a balanced plate. If you are going to have an animal protein, we portion out our servings to 4-ounce portions, so we make suggestions. Our philosophy is, ‘All you care to eat,’ but we try to make suggestions when it comes to portioning. We want you to try everything, because we make 96 percent from scratch—it’s extremely good—and 25 percent of our produce is locally sourced, including from the Farmer’s Market that we have here every Tuesday afternoon, so we take every step that we can to minimize waste pre-production and to be considerate of that. So the next responsibility then is on the students to say, ‘OK, it’s on me to only take as much as I’m going to eat, or to try something that I may not normally try.’”

For Chef Roger, exploration is the ultimate goal. He’s not aiming to convert a campus to a label like vegan or vegetarianism, but to replace one meat with a plant-based option so delicious that it’s hard to pass up.

“This is the future,” he said. “That’s what we want everybody to do. Less red meat, a little bit more Portobello—just balance it out.” 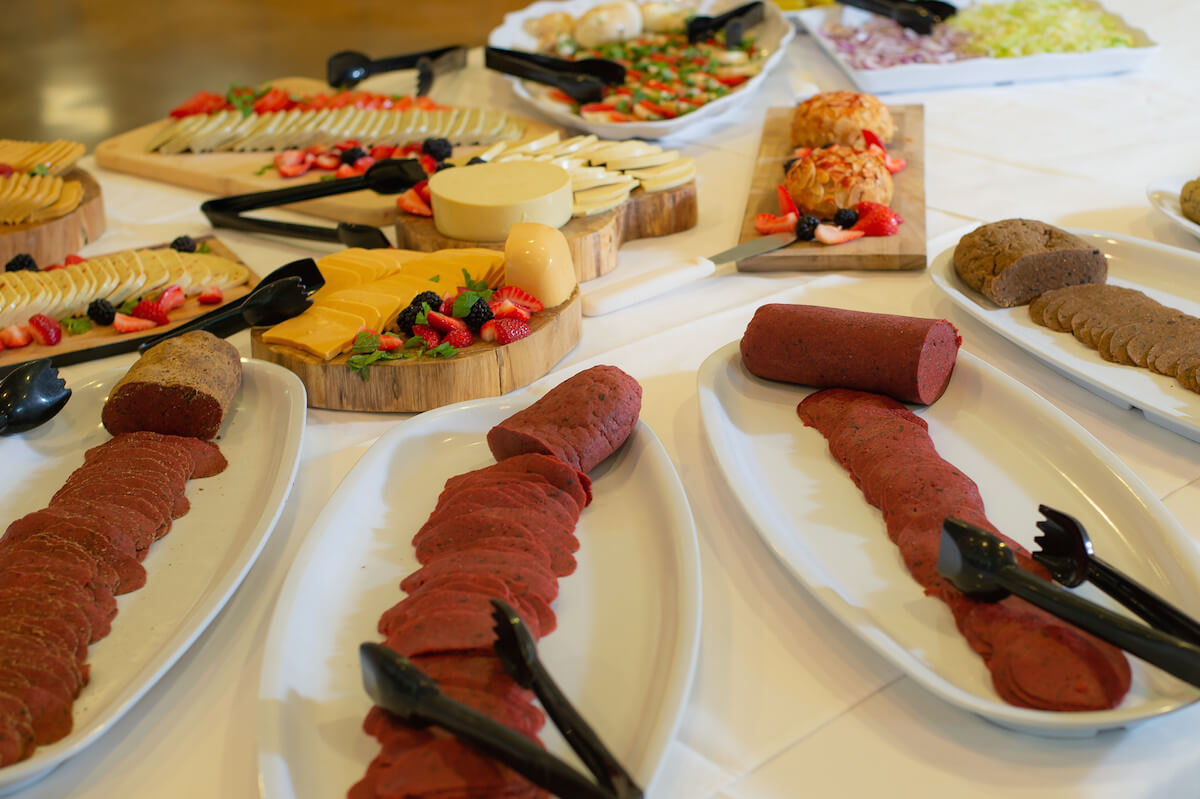