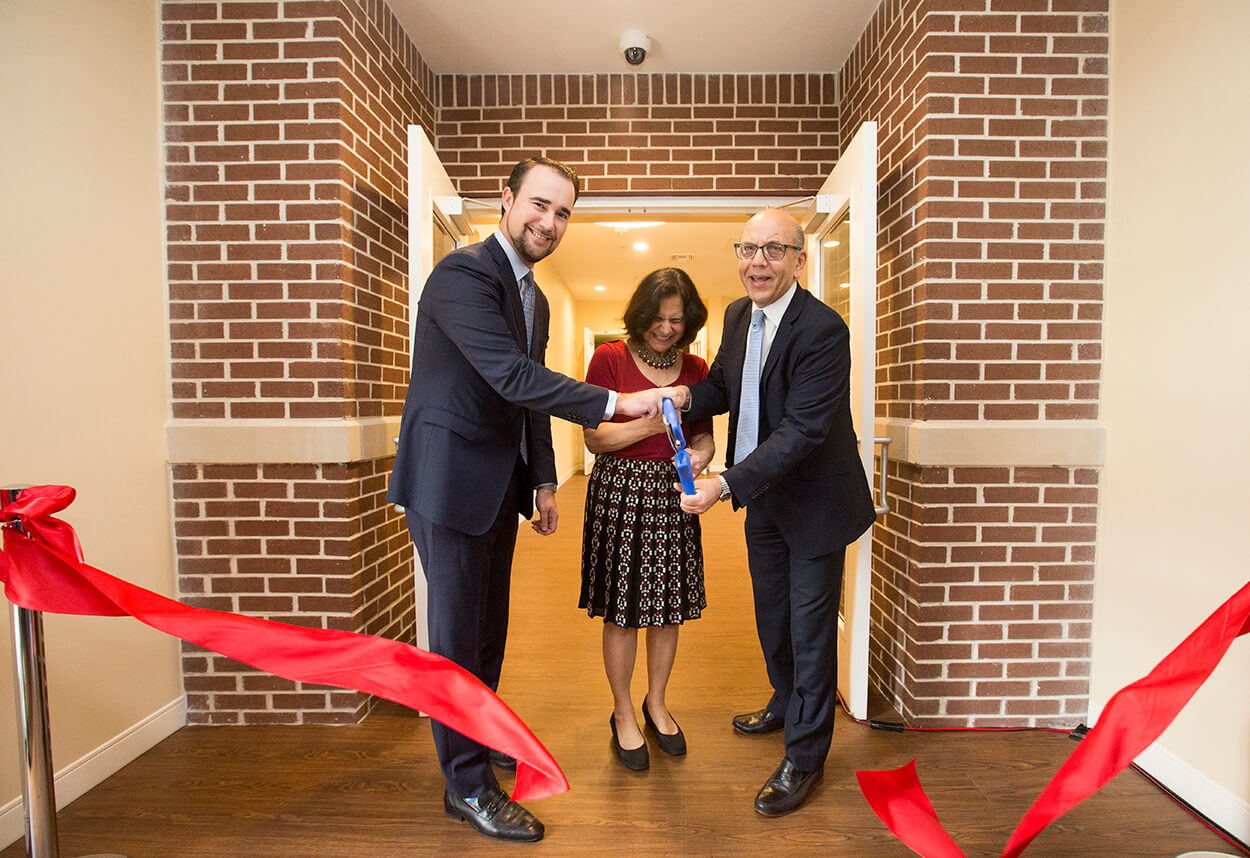 Nora’s Home has doubled its impact as a welcoming retreat for organ-failure patients awaiting life-saving transplants and medical care with a campus expansion.

Completion of the nonprofit’s second phase of development, celebrated Sept. 21 with a ceremonial ribbon cutting, brings capacity to 32 guest rooms. The home-away-from-home is located in the heart of the Texas Medical Center (TMC) and is an affordable hotel alternative for transplant patients and their families who face costly stays during lengthy medical treatment in Houston.

“It’s really an amazing day. It is a dream come true,” Houston transplant surgeon Osama Gaber, M.D., chair of Nora’s Gift Foundation, Inc., director of Houston Methodist Hospital’s J.C. Walter Jr. Transplant Center and the J.C. Walter Jr. Presidential Distinguished Chair. “I think one of the hardest things when we were operating in a smaller space was the number of people we had to say ‘no’ to. This is really going to change that completely.”

Many individuals, organizations and businesses helped make the original facility and the expansion realities. To honor their first donor and constant supporter, Paula Hern, the campus will be named the Hern Family Campus.

When Nora’s Home opened in 2013 with 16 guest rooms, the urgent need was immediately evident. Even though each room can accommodate up to four people, Nora’s Home has had to turn away four guests for each one who lodged.

“We opened in the fall of 2013 and by February of 2014, we had a waiting list,” explained Natalie Raymer, executive director of Nora’s Home. “The opportunity to bring more families in at one time is incredible and having the capacity to serve 32 families at one time expands the Nora’s Home network. It is a family.”

Rooms cost Nora’s Home $75 per night to run, but guests are billed based on ability to pay. Raymer estimates that the average charge per room is about $37 per night for families with the remaining balance paid through Adopt a Family funding. For comparison, hotels in and around the Texas Medical Center often start at $90 per night.

“It’s a testament to the Texas Medical Center—these amazing hospitals and institutions. There are thousands of transplants being done in the TMC and people come from all around the world for it and we really help them with something they need,” said Osama Gaber, chair of Nora’s Gift Foundation, Inc., as well as director of Houston Methodist Hospital’s J.C. Walter Jr. Transplant Center and the J.C. Walter Jr. Presidential Distinguished Chair.

Mike Catlett of Jacksonville, Texas, has been staying at Nora’s Home for the past two weeks while he recovers from a liver transplant.

“It is wonderful—a wonderful place,” Catlett said. “They are turning people away and some of us can’t afford it. The motels around here are so expensive and some of us have to stay here for a month or two after we have transplants, so it is a godsend for sure.”

As leaders from the Texas Medical Center and the greater community celebrated an expansion that so many patients and their families will rely on, everyone was reminded of the tragic reason Nora’s Home came into existence.

“Seven or eight years ago, we met, and [Osama Gaber] shared with me a very sad story and a dream,” said George Pontikes Jr., founder of Satterfield & Pontikes Construction, Inc., which built the Nora’s Home expansion. “I hear a lot of dreams, but it’s seven or eight years later. I look at this compound, and all of the people here, and I am just humbled and proud to be a very small part of that.”

While on an Italian vacation in 1997, 7-year-old Nora Gaber was killed in a car accident.

“It was very difficult—we were in three different hospitals,” Osama Gaber recalled. “Lillian and I were in a hospital, the older kids were in a hospital and Nora was in a hospital. You recognize the value of our health care system when you go outside. It is expensive, but it is also much more humane than anything else out there. We finally managed to get the whole family back together. Unfortunately, Nora did not make it.”

Devastated, injured and in a foreign country, Nora’s parents, transplant doctors Osama and Lillian Gaber, M.D., associate medical director of Renal Pathology at Houston Methodist, ensured her organs were donated in Italy to save the lives of local children.

The Gabers wanted Nora’s memory to survive too. As young as she was, her father recalls that Nora always worried about others having food and shelter. Upon their return to their then-home in Memphis, Tenn., the Gabers started the Nora’s Gift Foundation in 1998. They eventually rented two floors of a hotel owned by The University of Tennessee Health Science Center in Memphis to offer lodging to patients waiting for organ transplants and their families. When the Gabers moved to Houston, Houston Methodist donated land to build what is now Nora’s Home. The organization became a TMC member institution in 2015.

“Every night when I came to put Nora to sleep, she wanted to ask me to make sure all of the people had a place to sleep and something to eat,” Osama Gaber said. “She clearly was stalling because she didn’t want to go to bed, but I think she would be very proud because that is what she always wanted—a place for people to sleep and something for them to eat and I think we have achieved that.”

And after more than 20 years of work, Nora’s dream continues to be fulfilled. The 15,000-square-foot expansion will allow Nora’s Home to welcome even more guests during difficult times. The new kitchen features four stoves with ovens, three dishwashers and ample space for cooking. The building itself is a testament of community. The mattresses were donated by Serta and Sherwin-Williams donated paint for the expansion. Many of the new rooms were financed by local organizations and charitable families. LifeGift, the designated organ procurement organization for the northern, southeastern and western regions of Texas, donated the Sun Room.

“LifeGift and Nora’s Home give a sense of optimism to people who are really in dire straits,” said Kevin Myer, LifeGift’s president and CEO. “We like the Sun Room because of the fact that it is bright and it really does fit in with what we do. We offer hope—so this, to us, signifies that there is hope and we are just happy to be a part of it.”

Nora’s Home also offers patients and their families a sense of community with shuttle rides to and from the medical center as well as access to a stocked pantry and laundry services.

“It’s a testament to the Texas Medical Center—these amazing hospitals and institutions. There are thousands of transplants being done in the TMC and people come from all around the world for it and we really help them with something they need,” Osama Gaber said. “I think we are going to have space to accommodate a whole lot more people and we still have space to build extra if we fill it up again.”