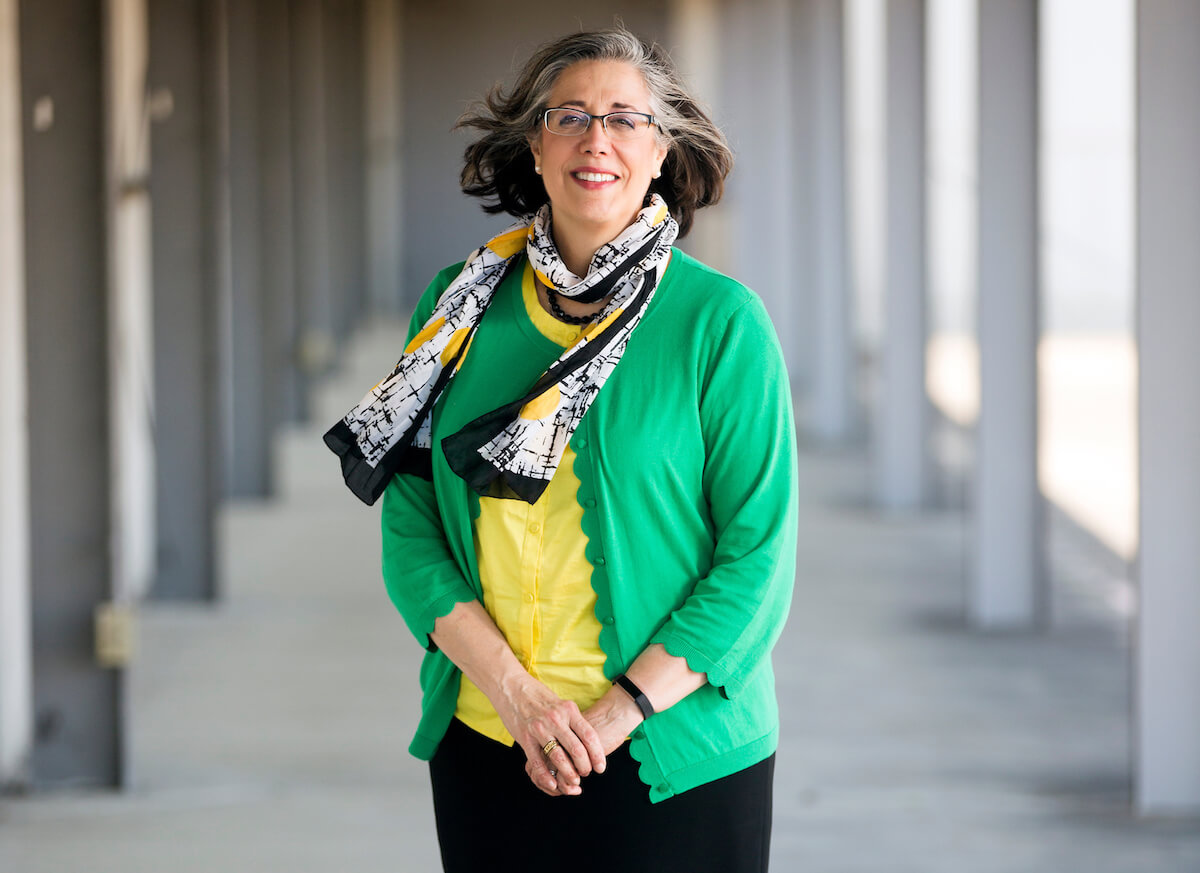 Carmel Bitondo Dyer, M.D., is a voice for the older patient population. At The University of Texas Health Science Center at Houston (UTHealth), she is the founder and executive director of the Consortium on Aging and a professor of geriatric and palliative medicine at McGovern Medical School. She was a delegate to the 2005 White House Conference on Aging and has twice provided testimony to the U.S. Senate on behalf of vulnerable elders. Dyer spoke with Pulse about the challenges of geriatric care and her passion for helping people age.

Q | What led you to geriatric medicine?
A | It was really two-fold. One, I had this incredible Italian grandmother who lived to be 98 years old. She was still living alone when she died, and she was just really a great inspiration to me. She had been a seamstress in the sweatshops of New York City. She designed wedding gowns. She was amazing. I also had an opportunity when I was a senior in college. You know how you have to get medical experience to do medical training? I was in a small town—DeLand, Florida—and there were no volunteer jobs, so the school guidance counselor hooked me up with one of the local nursing homes. The director of nurses took me under her wing and she put me through nurses’ aide training. She had me round with the geriatrician, and I just thought this was a tremendous career.

Q | Was there anything in particular that has stayed with you from that experience?
A | We saw these people in very late age, and I remember there was a gentleman who had problems with dementia. When he passed away, they handed us a one-page biography of all the contributions he had made on the national front and locally. I thought, ‘We missed this. We missed it. We saw him in his late age, but he had a whole lifetime of contributions.’ I thought, ‘That’s what should come first when you meet somebody. You’re only seeing a snapshot of them when you see them when they’re elderly. You don’t know all the things that they have done in their life.’

Q | Why do you think there is a shortage of geriatricians in the United States?
A | Unfortunately, geriatricians deal mostly with Medicare. Medicare reimbursement is based on volume. With elderly patients, you have to spend more time. As a result, geriatric medicine is the only field where you can get extra training and earn less money. I think that’s why. I also don’t think that everyone realizes what a difference the expertise makes. Here’s why: Back when MD Anderson was started and Texas Children’s Hospital was started, the average life expectancy was 68 years of age. Now, it’s pushing 80. The textbooks have not caught up, and the training we get in geriatrics is really targeted toward the frail elderly.

Q | Is that why you are leading an initiative to create a geriatric hospital?
A | There is a lot of dissatisfaction in the public with the health care system when you’re of an advanced age. We are not equipping health professionals with what they need. If you only get a month of training in geriatrics in internal medicine in medical school, that’s not enough. Both Baylor and UTHealth teach geriatrics, but many medical schools do not teach it at all. I’m a geriatric specialist, so people send me the more challenging cases in that regard, but there’s a big quality gap and there’s huge room for improvement. I see the costs escalating and health care taking up a greater part of the gross domestic product every year. I know there’s a better way to do it. You’re going to put a pediatrician in charge of a pediatric hospital. If you’re a hospital, or somewhere where a large portion of your patients are elderly, you need geriatricians there.

Q | Where, specifically, do you see the most acute need for better geriatric care?
A | I could say everywhere, but I think I would start in the hospital. A lot of people disagree with me. They say, ‘Carmel, don’t you understand? We’ve got to keep people out of the hospital!’ Yes, we do. However, we are not yet stopping heart attacks, sepsis or stroke. Well, we are making dents in those conditions, but people still have them and they still come into the hospital, and that’s where the greatest harms are. Hospitalists are at a disadvantage. The patients have 80 years of history and the hospitalist is seeing them in a snapshot, and is challenged to save their lives right then and there. The next area would be in the transition from the hospital out to the community. That’s because it’s hard for patients to understand all the instructions. Sometimes the medicines are changed. The third area is medication management—outpatient or inpatient. Older people react differently to medications. Older people with dementia react yet still differently than other older adults. I like to say if I could teach every doctor in the United States one thing, it would be how to manage medications in the very elderly, because there are no algorithms you can follow for that. I’m being very edgy and very controversial here.

Q | You’ve testified in front of the U.S. Congress on behalf of vulnerable elderly people. Can you describe that experience?
A | I have had the privilege to do work in elder abuse prevention and intervention and disaster preparedness for more than 20 years. We were able to present to the U.S. Senate Special Committee on Aging—to look them in the eye and tell them what we are seeing on the ground. It was a great privilege.

Q | Did you see any tangible results from that special committee?
A | Actually, out of that came the Elder Justice Act [signed into law by President Barack Obama on March 23, 2010, as part of the Patient Protection and Affordable Care Act]. The law, which protects seniors from elder abuse, helps stimulate a lot of activity at the federal level.

Q | You are featured in UT Health videos discussing illness in older populations. What are some of the biggest challenges and misconceptions there?
A | One of the cardinal signs of illness in an older patient is an altered mental status, but it’s hard to know how to interpret that. Are they just having a bad day? Are they getting Alzheimer’s disease, or is it really that they’re acutely ill? Whenever that happens, family members and caregivers need to get their older loved one to some sort of a health care provider, but I don’t think people realize that. In addition, I don’t think people realize that older adults can have infections without having a white blood cell count that’s high or without having a fever. They don’t, I think, understand that for some frail, elderly people, you can’t drill down on their blood pressure or their blood sugar because you’ll lower it too much for their body state, and that results in falls. In fact, studies now show that there could be brain and heart damage from ratcheting the blood pressure down and managing it too tightly in old age.

Q | Of the studies you’re conducting at the Consortium on Aging, is there one of which you are particularly proud?
A | We were able to start a telecommunication program for Adult Protective Services clients—the first in the country. We’ve done almost 500 cases now, and we started it last June. We can do a tele-consultation with a geriatric elder mistreatment expert and geriatrician where the case worker goes into the home with an iPad and we FaceTime. It’s all HIPAA [Health Insurance Portability and Accountability Act] protected. We help make determinations about how well the patients can make decisions about themselves, whether or not abuse or neglect is present and do they need any medical interventions. We are giving advice to the protective service worker so they can do a better job of taking care of these victims. We just got a paper accepted on this subject in the Journal of the American Geriatrics Society. We were waiting until we got 500 patients, and now we’re going to start analyzing. Jason Burnett, Ph.D., co-director of the Texas Elder Abuse and Mistreatment Institute, is leading that.

Q | You also talk about the concept of healthy aging. What does that mean to you?
A | I think that the term has been applied really broadly, right? You start aging from the time you’re born. Truly, where people start to be concerned about aging starts at age 65. That’s when you need to prepare—if averages are correct—to live another 20-plus years. You have to make sure you’re taking the steps so that when you are 85 and 90, you’re the healthiest and the most functional you can be. It’s never too late to start thinking about healthy aging. However, with the people and the patients that I’ve seen, there are probably two major things to do: First is exercise, exercise, exercise. I have a treadmill desk in my office so I can practice what I preach. The second thing is, research studies have shown that having a positive attitude helps preserve cognitive health. People who make lemonade out of lemons, people who look at the bright side and are resilient—they do better. We don’t have to wait to be 65 to do that. We can start that anytime.