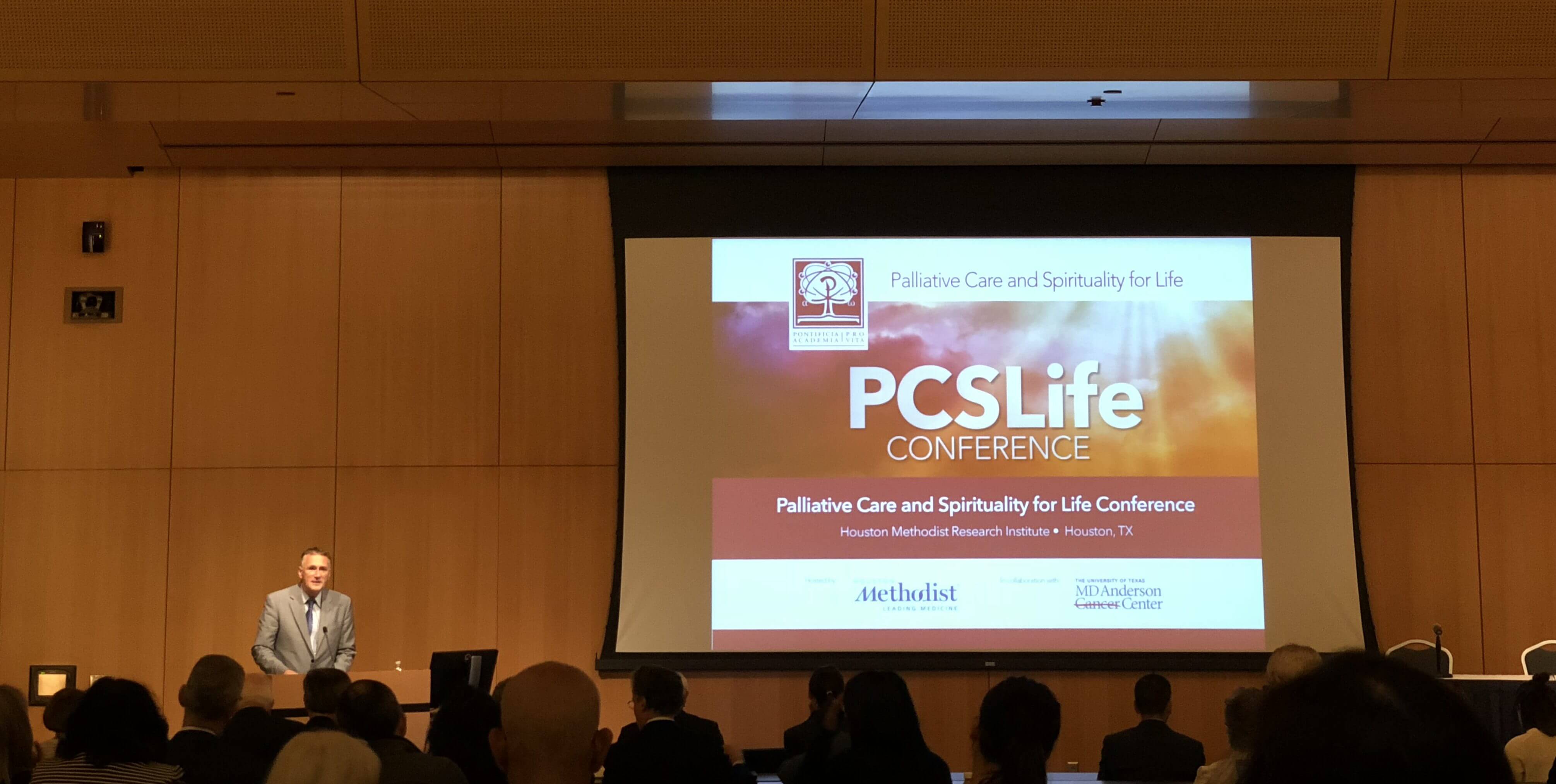 Inquiring minds focused on the intersection of palliative care and spirituality during a conference this week in the Texas Medical Center.

“We are working to promote a palliative care culture that can boost growth for international and a city’s society that leads society to commit itself more completely to care for others and to offer learning accompaniment until the end of every life,” said Vincenzo Paglia, president of the Pontifical Academy for Life and recipient of the 19th Annual Marialuisa Lectureship for Life. “It is crucial to learn more intensively about the greater anthropological questions and the enormous ethical challenges we face with regards to the end of life. It is in this context that we explore the contributions of the palliative care to human beings that arise from movements of the human spirit.”

Neil MacDonald, M.D., emeritus professor at the University of Alberta and McGill University, then provided a historical context of palliative care. In the 1950s, he explained, many patients were dying in hospitals rather than in the comfort of their homes due to a wave of new treatments and therapiesy. Even though nearly three quarters of cancer patients experienced physical pain, doctors rarely used painkillers—such as morphine—to mitigate their suffering.

Palliative care is a relatively young field that shares its history with hospice care and its focus on caring for dying patients. Cicely Saunders, an English nurse and physician who sought to alleviate human suffering from terminal diagnoses, founded St. Christopher’s in London more than half a century ago to treat the physical, spiritual and psychological well-being of patients. The hospice movement, which sprang from Saunders’ vision and the commitment to addressing patients’ physical, emotional and spiritual needs, gained momentum in the following decades.

“As it was then, so it must continue. It is key that we do not lose the existential dimension of palliative care. Our success in assisting our patients and their families, not to mention ourselves, hasn’t changed in the decades since St. Christopher’s opened in 1967,” MacDonald said. “The key determinant in determining quality and … quantity of life remains our full understanding of interdependence of the four domains that interact to define human experience: physical, psychosocial, social and existential spiritual. To ignore any of these aspects is to ultimately hamstring our outcomes.”

Although the medical and scientific communities have made great strides in cancer research and therapeutics for the management of cancer, the supportive needs of the patients and their families are greatly underserved in hospitals, said Eduardo Bruera, M.D., medical director of the Department of Supportive Care Center at MD Anderson. He presented data that showed the lack of palliative care in hospitals across the country: Only half of the comprehensive cancer centers and 20 percent of the regional cancer centers had outpatient care for palliative care.

“When you look at inpatient beds, it was also horrible among the comprehensive cancer centers, so we did have a problem between what we knew would be great and what was actually going on. That is one of the challenges,” Bruera added. “It’s not about the patient’s body. It’s about the person who is suffering from it. We’ve known this for a long time.”

Ultimately, suffering kills, but palliative care has been shown to effectively reduce pain while treating disease.

“It’s all about the brain: Physical and emotional suffering happens in the brain. That’s why the suffering is there and not only the cancer,” Bruera said. “We know the mechanisms by which that dialogue happens. This duality of the growth of the cancer or the growth of the disease and the suffering is totally artificial. The reality is that many of these factors promote disease growth and promote personal suffering.”

In addition, Robin Warren Lovin, Ph.D., the Cary M. Maguire University Professor Emeritus of Ethics at Southern Methodist University, presented an anthropological perspective on medicine, palliative care and spirituality in which he delineated three features of human nature and human flourishing that work together: autonomy, mortality and rationality.

“Theologians and philosophers will offer extended accounts of each of these elements, but the spiritual path is to bring these three key features of human nature into alignment with each other as far as possible,” he said. “In palliative care, the physicians, the patient, other health care givers, health care institutions and the chaplains and other spiritual support personnel have a role in bringing about that integration.”

The conference closed with a session dedicated to the PAL-LIFE White Paper for Global Palliative Care Advocacy, a position statement of the Pontifial Academy for Life declaring palliative care as “the most humane response to the needs of seriously ill and dying children, adults, and fragile elders, to ensure that they are cared for until the end.”

For more information on national efforts to promote palliative care, read our Pulse story: Palliative Care and Spirituality for Life.