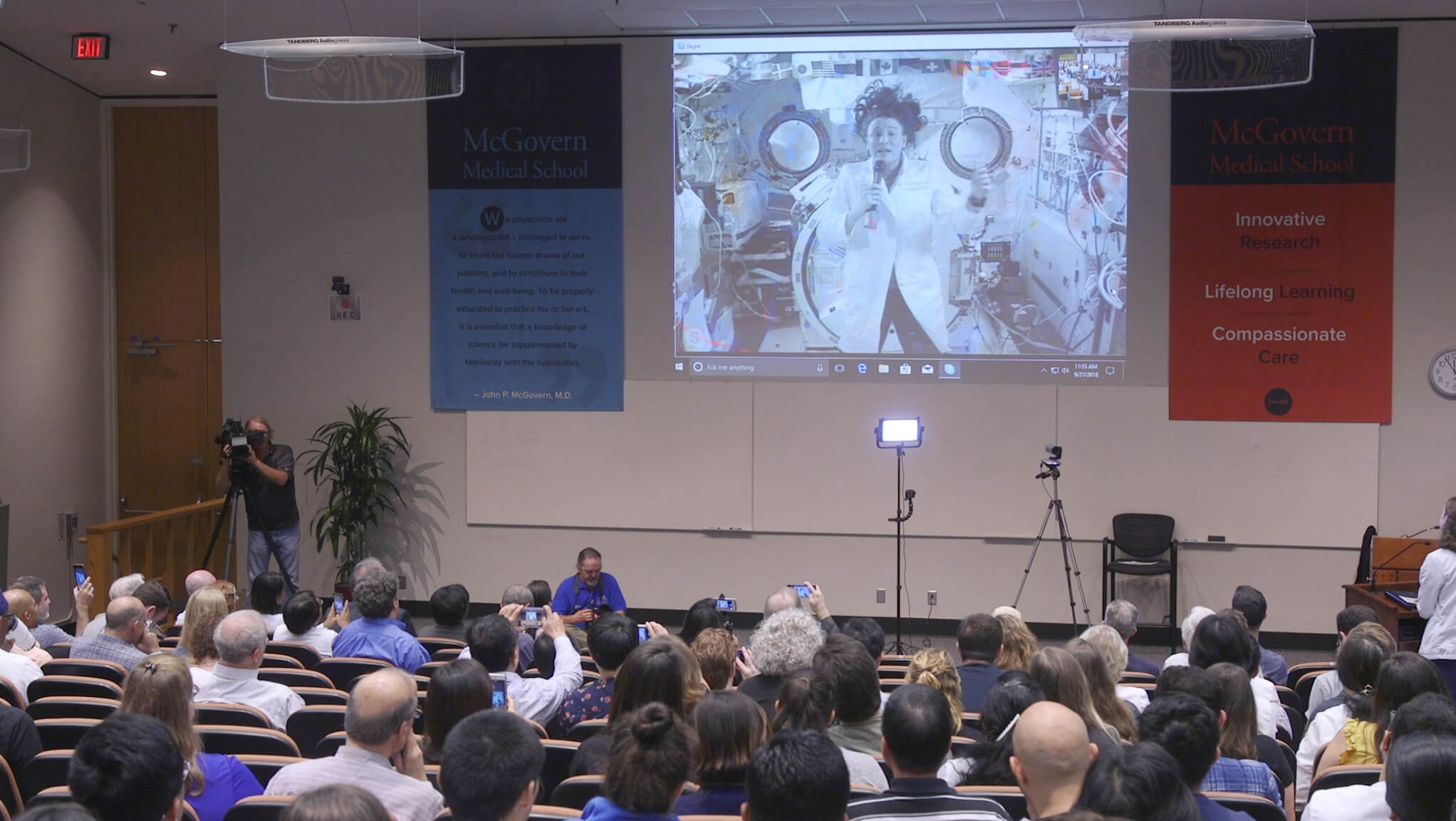 Thursday’s physician guest lecturer for UTHealth students floated onto a screen, barely buoyed by gravity, with a welcome from far, far away.

The connection between the astronaut—live from space—and the audience at The University of Texas Health Science Center at Houston McGovern Medical School was immediately evident: Serena Auñón-Chancellor, M.D., MPH, was wearing her McGovern white coat on the International Space Station, to the delight of about 200 people in the auditorium.

The astronaut graduated from UTHealth’s medical school in 2001.

“I am totally excited to be here and so excited to talk with you all today,” Auñón-Chancellor announced as she waved.

McGovern Dean Barbara Stoll, M.D., introduced the conversation as “an out-of-this-world, once-in-a-lifetime” experience for the institution.

“As a medical school that sits in the heart of the Texas Medical Center, we’re accustomed to groundbreaking research, we’re accustomed to patient miracles—to educational triumphs—on a daily basis. But space medicine and space travel are not usually on our radar screen, so this is amazing,” Stoll told the audience. “To have one of our alums on the International Space Station is remarkable and a testament to the amazing capabilities of our students, our trainees, our faculty and the limitless possibilities of a McGovern Medical School education.”

The 20-minute question-and-answer session included inquiries about how Auñón-Chancellor became an astronaut, the value of space medicine on Earth and how she maintains mental and emotional well-being during long missions.

Auñón-Chancellor, 42, said she wanted to be an astronaut since she was about 8 years old. After finishing medical school, she completed internal medicine and aerospace medicine residencies at The University of Texas Medical Branch at Galveston (UTMB Health), where she also earned a master’s in public health. She began working with NASA as a flight surgeon in 2006 and was selected as an astronaut in 2009.

She is part of the Expedition 56/57 crew that launched to the International Space Station (ISS) in June .

“As we push out further towards the Moon and Mars, for example, your bones and your muscles are immediately unloaded. There are changes that occur in your brain—even your eyes,” the astronaut said, her thick ponytail hovering like a halo of dark curls. “I think people should care because a lot of the experiments we’re doing up here can directly impact them on Earth. … I do want folks to walk away with one message, and that’s: A lot of the science we are doing up here definitely helps to better the lives of folks down on Earth.”

She also talked about the science and research happening on the ISS.

“Just this week and last week, we are doing surface sampling swabs and doing direct DNA sequencing here on the ISS to actually identify those microbes. … Next week we are actually going to be looking for mutations in the DNA itself to see if those bacteria are actually, themselves, being impacted by the microgravity environment,” Auñón-Chancellor told the audience.

She also mentioned an experiment on “fluid shifts.”

“Once we get into space, we have this massive fluid shift from the feet up into the head,” the astronaut explained. ” Could those actually be causing changes within the internal structure of the eye?”

Auñón-Chancellor revealed how the crew stays connected to loved ones with the news (a day behind), weekly video conferences with their families and voice-over-internet phone service that allows them to call Earthly cell phones. A supply module from Japan arrived at the ISS with cargo from Earth moments before the chat.

“We are working hard to open that hatch tonight because we’ve got goodies waiting in there for us,” the astronaut said, adding that the crew exercises about 2½ hours a day with help from a treadmill, stationary bike and a weightlifting apparatus. “When we eliminate even the small things, they make a huge impact psychologically.”

Jeffrey McBride, a fourth-year medical student who is headed to an aerospace medicine clerkship at Johnson Space Center, said he hopes to pursue a career that combines that specialty with psychiatry and is particularly interested in how astronauts maintain mental health.

“Dr. Chancellor did talk about how important mental well-being is in space and if we do longer exploratory missions, psychiatry and preventative medicine are key elements in that aspect to make sure missions are successful,” said McBride, 26. “It was fascinating to hear her perspective.”

Niki Khandheria, a second-year medical student, didn’t realize initially that she would be watching Auñón-Chancellor live from space.

“I thought she had just been an astronaut and was coming to give a lecture,” Khandheria said. “I’ve always been interested in astronomy and the stars and space exploration and the fact that NASA is right here. I never thought the two worlds would come together like this.”