One Year After Maria, An Island Endures: Health Care in Puerto Rico

One Year After Maria, An Island Endures: Health Care in Puerto Rico 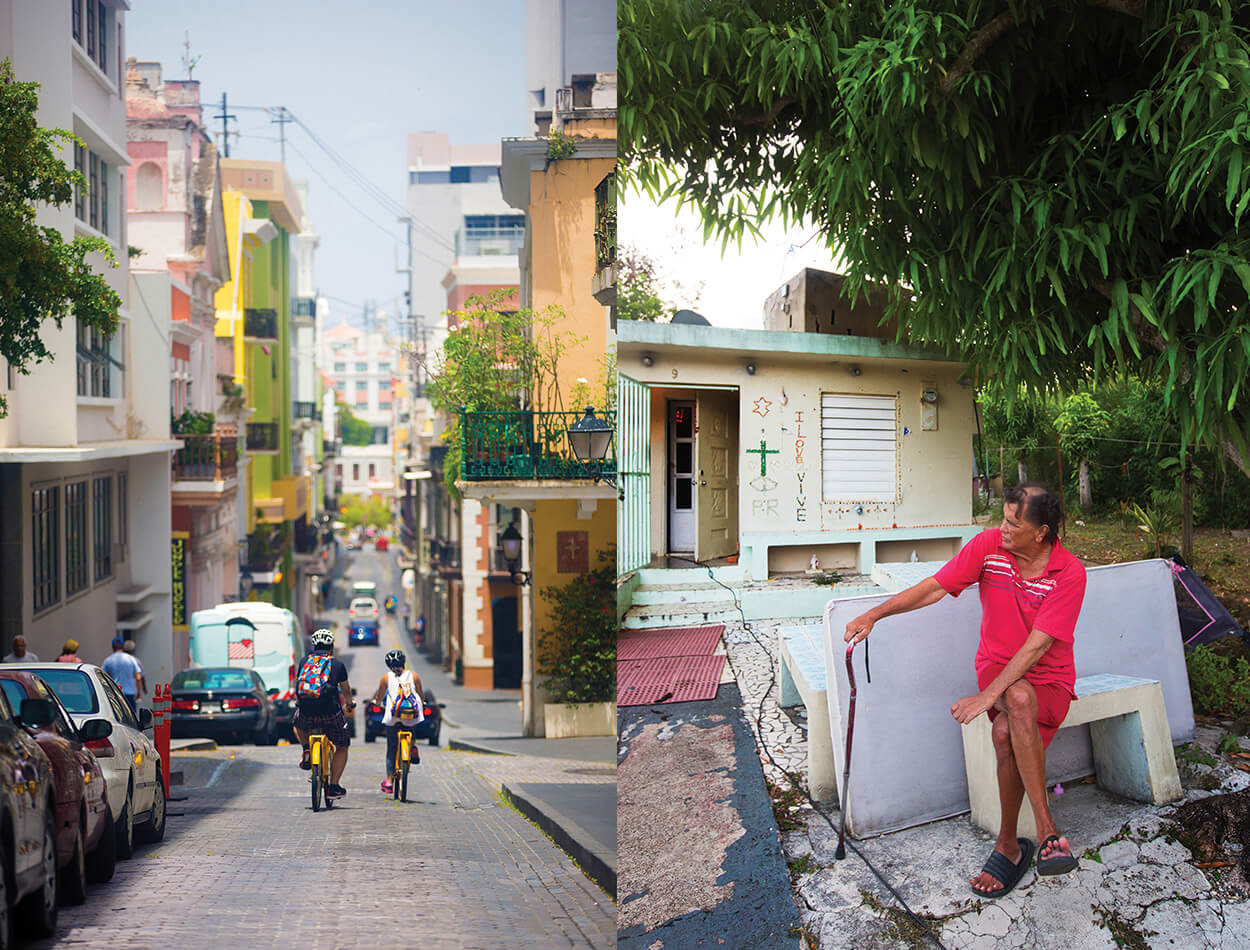 Salinas, Puerto Rico – The two doctors found Pedro Rodríguez napping on a hammock under a torn blue tarp. He was surrounded by mountains, wild and lush, an occasional smattering of hot pink flowers from native Framboyan trees punctuating the deep green landscape. Rodríguez had come home to die among them.

It was 10 months to the day since Hurricane Maria struck Puerto Rico, devastating an island already crippled by a financial crisis and still recovering from Hurricane Irma just two weeks prior. The mortality rate on the island jumped by 62 percent after the storm, with estimates that the number of hurricane-related deaths could be as high as 4,645, according to a study published in July by The New England Journal of Medicine. In the end, Maria would be the worst natural disaster on record for the U.S. commonwealth.

An estimated 135,000-plus people relocated to the mainland over the six months following the hurricane, according to the Center for Puerto Rican Studies in New York. These displaced survivors joined droves of professionals who have been leaving the island for years to pursue better opportunities.

But Puerto Rico is a place of paradox. Despite the ravaged, post-Maria landscape, despite the brain drain fueled by the island’s ongoing financial crisis, Puerto Ricans are starting to come home—even people like Pedro Rodríguez, who face grave health challenges.

They will not give up. 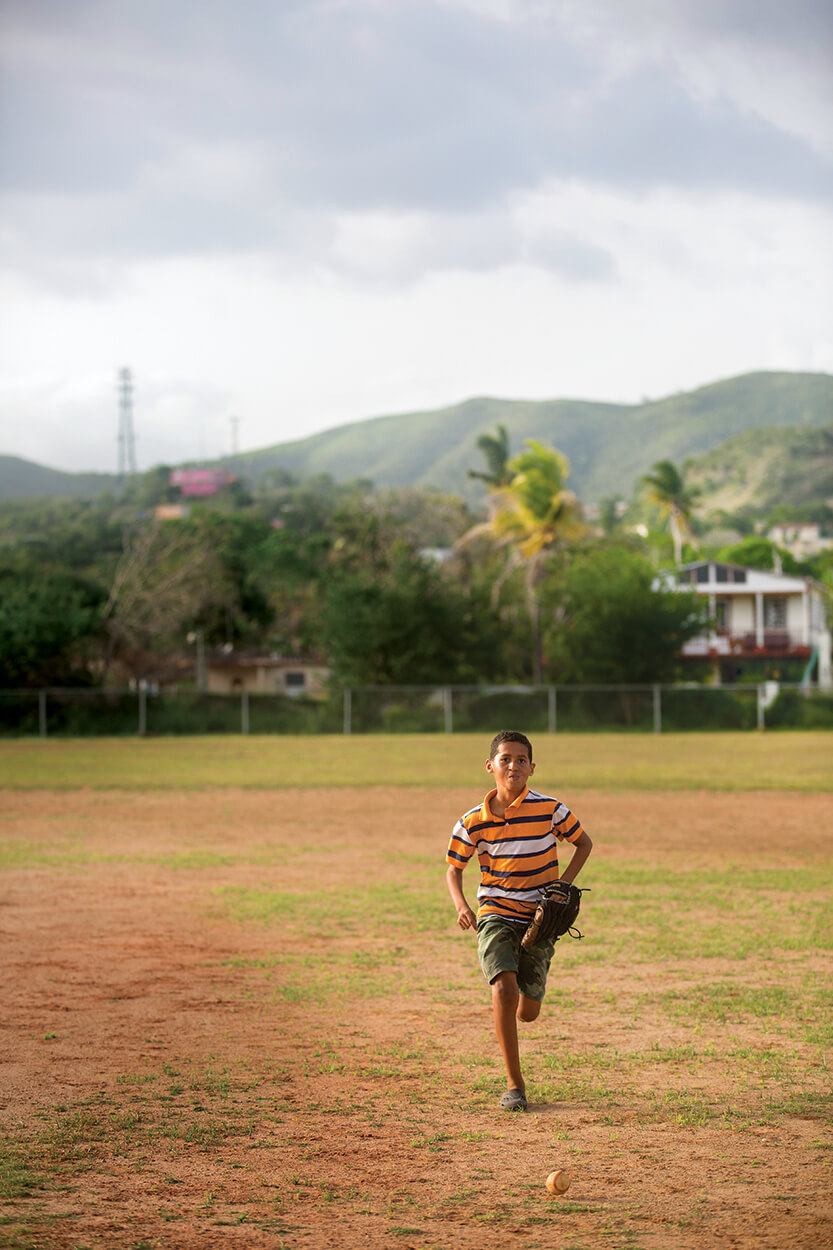 Before visiting Rodríguez, Dr. Mario Polo and Dr. Ricardo Flores stopped by a playground in Salinas with a trunk full of toys. Local kids arrived on bicycles and horseback and joined the doctors for a game of baseball. A boy in a faded striped shirt emptied his pockets, throwing a tattered black wallet and two packages of BBQ-flavored sunflower seeds into the dirt, and ran to the outfield. Behind him, the plantain crops were once again thriving, ready to be fried or roasted or mashed into flour. Blue tarps serving as makeshift roofs filled the hills, and the families living under them were preparing to attend a region-wide food festival.

The party would go late into the night, after the coqui frogs began their chorus, after the Medalla beer cans stacked up, after a karaoke singer serenaded the streets of Salinas with Frank Sinatra’s “My Way.”

Polo smiled at the sound.

“Here, there will always be a reason to celebrate,” he said.

Like Rodríguez, Polo recently moved back to the island. He left his position as a neurointerventional surgeon with Houston Methodist The Woodlands Hospital so that he and his wife could raise their children closer to family.

He also felt a calling.

After Maria, Polo joined forces with Flores, a fellow Puerto Rico native and clinical director of the Cancer and Hematology Centers at Texas Children’s Hospital The Woodlands, to create a Houston-based relief group called Texas United for Puerto Rico. Their mission was to collect medical supplies and get them to the island as quickly as possible.

Now, the two doctors had returned, Polo permanently and Flores for a visit. In addition to checking in on Rodríguez, they were on a fact-finding expedition to learn about the state of health care since Maria and determine which supplies were still most needed.

The doctors know that patients on the island still need attention and care, all these months later. They will not give up. 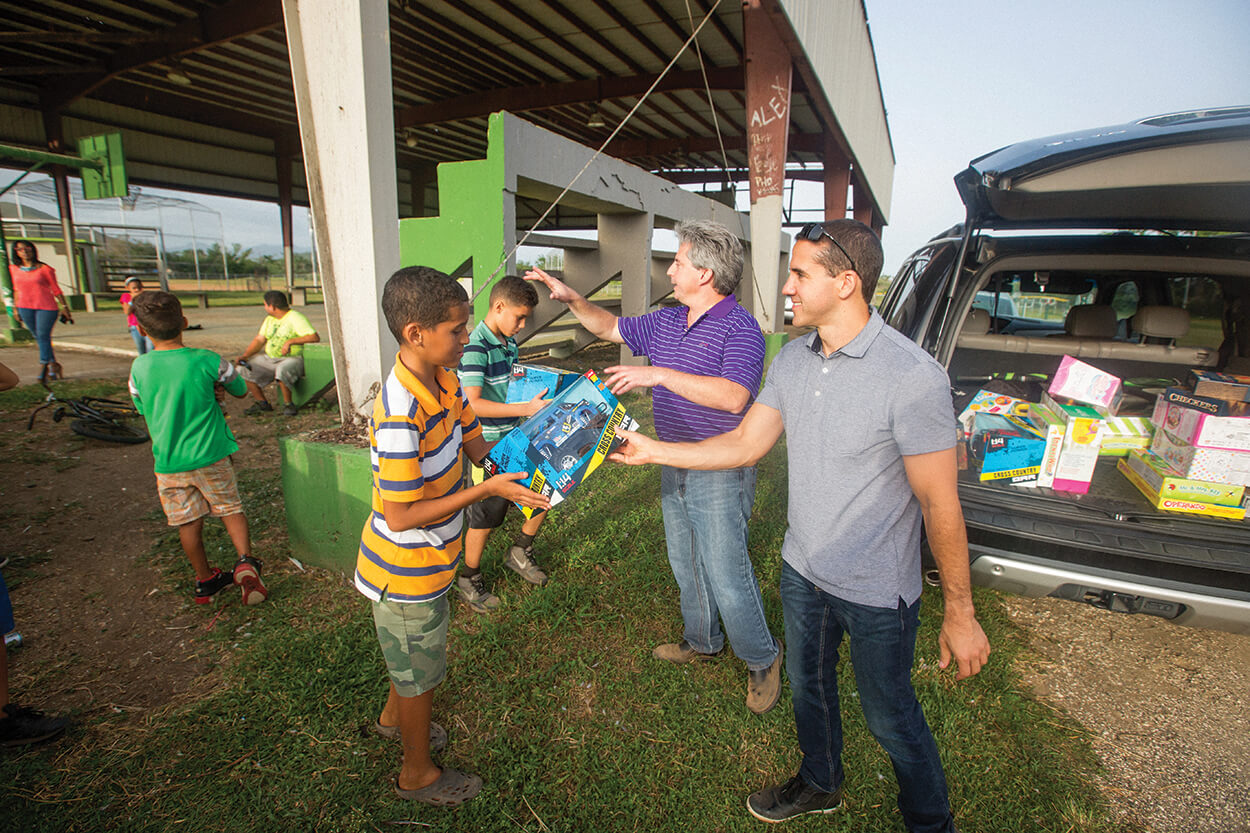 Too concrete, too cold

Parts of Puerto Rico are still without basic utilities. Residents haul water from streams, boil it to drink and cook on open fires or with propane, if they’re lucky. Locals describe helicopters hovering with utility poles, rooting them into the land one by one—painstaking work to restore a power grid that was unreliable even before the hurricane.

But high in the hills of Salinas, 50 miles south of San Juan, Rodríguez’s home buzzed with electricity that had been restored a few weeks before the doctors visited in late July. A rusted refrigerator chilled Coca-Cola, bottled water, sliced lunch meat and yellow cheese—luxuries Rodríguez had done without for months. In one room, a light bulb shone bright on family photos of Pedro, his wife Saidael González, and their son, Johny. Hanging on the wall was a newspaper clipping of Carlos Correa in the throes of last year’s World Series win, a relic from when Johny still lived there.

But Johny requires special care. As a young boy, he was left mentally delayed after suffering from hydrocephalus and meningitis. After Maria hit, the already lengthy journey to the main hospital in San Juan, coupled with the absence of basic utilities, prompted the family to relocate to Michigan and live with Rodríguez’s sister-in-law. Now in his late thirties, Johny would have electricity, clean water and easy access to hospitals.

His father, however, couldn’t bear it. Michigan was too concrete, too cold. So he said goodbye to his wife and son and returned to Puerto Rico, to his home that had stood fast through the storm.

Because of early-onset Alzheimer’s, Rodríguez sometimes forgets that he will very likely never see his wife and son again. Speaking in Spanish, he said that he misses them, and hopes they will visit soon.

Rodríguez also told Drs. Polo and Flores that he had lost almost all feeling in both feet, a sign that his diabetes was now causing permanent nerve damage. His left eye was swollen shut.

But he will not give up his home in the Salinas hills. 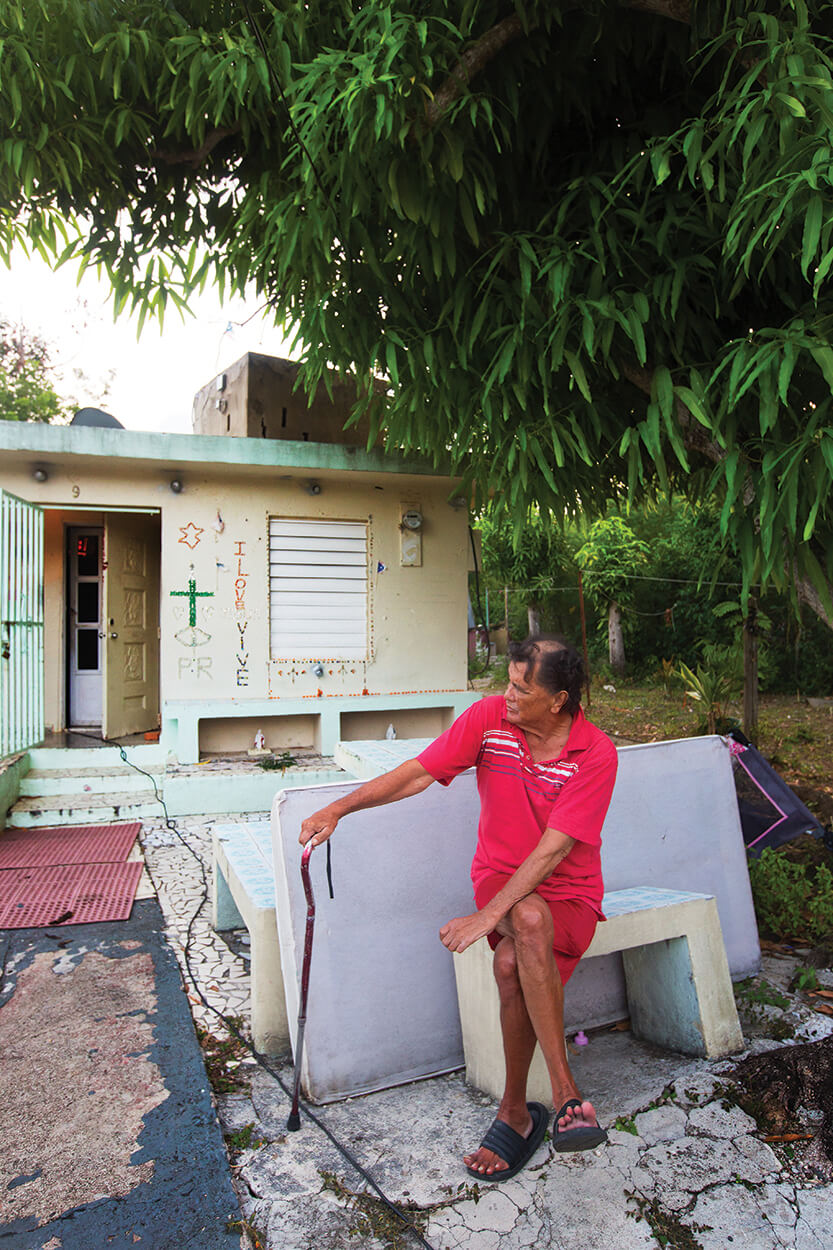 Pedro Rodríguez at his home in Salinas.

On Sept. 21, 2017, the morning after the hurricane, Dr. Gloria Colón, a pediatric oncologist with the University of Puerto Rico Pediatric Hospital in San Juan, tried to drive to work. She described the scene as apocalyptic, “like an atomic bomb went off.” Power lines lay haphazard on the ground, blocking the roads. Traffic lights dangled in the middle of the street and buildings and trees sat sloped and broken from surges of wind and rain.

“We went to sleep in 2017 and woke up in the 1940s after Maria,” Colón said. “We are not used to being without electricity, without facilities, without communications.”

Like so many others, Colón was unable to reach the hospital that morning. But in the days that followed, doctors, nurses, residents and medical students arrived in droves, prepared to treat patients and collect supplies. The hospital, which already served as the headquarters for trauma and specialty care on the island, quickly became the center of operation for relief efforts. Donations flooded in from charities and nonprofits. The first-floor classroom became a makeshift warehouse, with medical students organizing and labeling inhalers and insulin and antibiotics for distribution. Teams ventured out to remote areas to check on the elderly and on patients who needed ventilation or whose medications required refrigeration. Everyone pitched in, even those who lost their own homes and belongings.

Not once during the storm or its aftermath did the hospital shut down. But nearly a year after Maria, problems remain. A giant mobile power generator is parked out front. Inside, a NICU that split open during the storm is still undergoing repairs, and only two elevators are operational. Hospital-wide shortages of critical medicine and supplies are ongoing, Drs. Polo and Flores learned, and include staples such as ketamine, antibiotics, alcohol wipes, oxygen monitors, rabies vaccines and chemotherapy drugs.

According to local physicians, though, it isn’t simply a matter of the storm’s aftermath, but rather one of government bureaucracy. Protocols requiring multiple layers of approval lead to delay after delay.

“The hurricane aggravated our crisis,” said Dr. Maria Echevarria, a pediatric neuro-oncologist with the hospital. “We now face, sadly, the same things we faced prior to Maria. We had the crisis, we resolved it, but the baseline—we have the same limitations, the same government.”

Even before the storm, physicians typically made double the salary in the contiguous U.S. for the same job in Puerto Rico. They are a large subset of the professionals who have left for the mainland, adding to an already challenging recovery effort.

“It’s frustrating and it happens in every specialty,” said Dr. Jahzel M. González Pagán, one of four pediatric emergency medicine physicians across the entire island, which 3.3 million people call home, according to recent estimates. “We are short of staff and we cannot get more staff because there’s not enough money.”

But, she said, she has no plans to join the diaspora.

They will not give up. 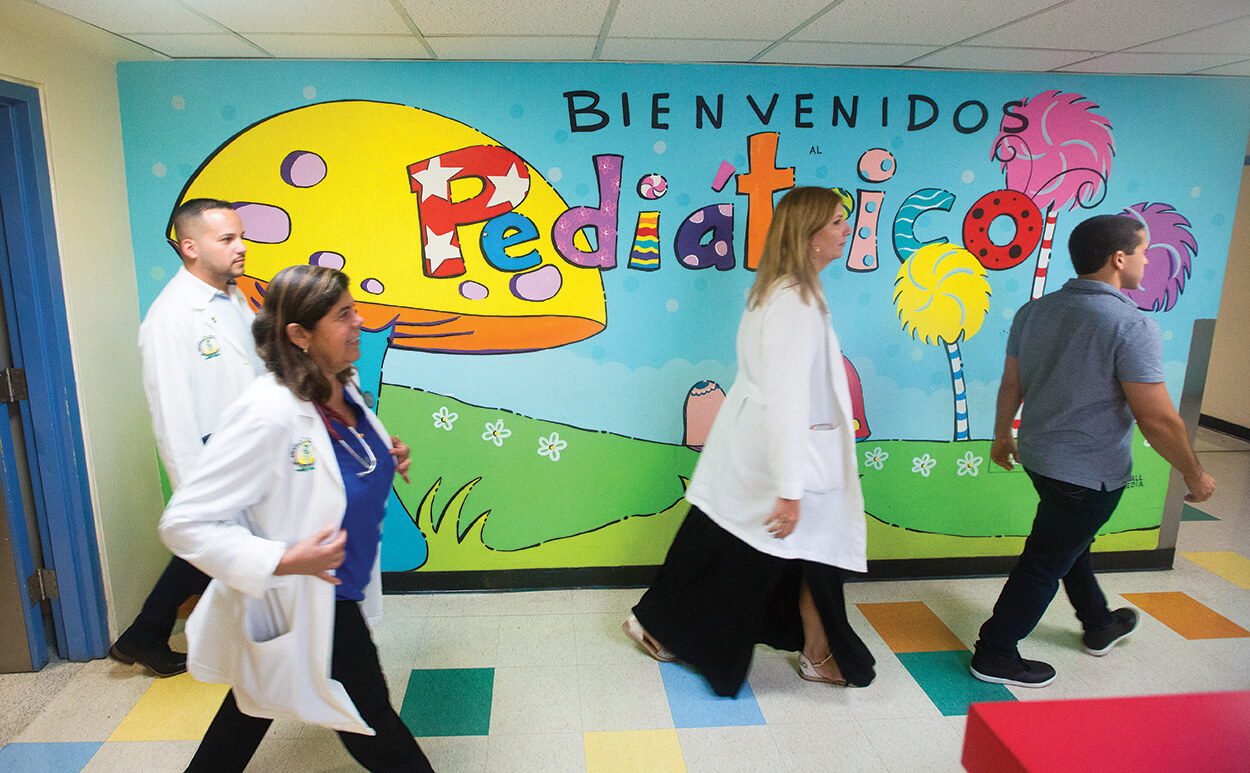 At Rodríguez’s home in the hills, chickens peck at the ground while dodging empty cans and plastic debris. Nearby, a wheelbarrow blooms with old food containers, an egg carton, papers and a shirt. Stacks of propane tanks, plastic cars and a playhouse sit abandoned, surrounded by potted plants that look well cared for, groomed even, but that could just be Puerto Rico. Things here tend to survive.

Mosaic tiles cover the entryway and statuettes of the Blessed Virgin Mary stand guard under a hand-painted bench. On the façade, colored glass pebbles spell out “I love,” “Jesus,” “Vive” and “PR,” the words pieced together like a cross. Old Christmas lights hang above a mural painted on the left side of Rodríguez’s front door—a man with a baseball bat standing between the American flag and the Puerto Rican flag, his hat tipped toward Puerto Rico’s single star.

Until the end, a close relative will look after Rodríguez. In Puerto Rico, extended families often live together, not necessarily in the same dwelling but on the same plot of land. It’s a practice that reflects the culture, one that values social interaction and family above all.

In Old San Juan, the historic colonial section of the island’s capital, a slogan is plastered among the pastel buildings, blue cobblestone streets and wrought-iron balconies: Yo No Me Quito.

It’s a message of endurance that resonates throughout the island, from the old forts of the Spanish Empire to González Pagán’s emergency room.

It was there on the first day of Polo’s new job in Puerto Rico, and in the room of a cancer patient who declined a medical trip to Houston in favor of her grandmother’s soup and her cousin’s companionship.

It is there at Rodríguez’s home while he swings in a hammock under the midday sun.

I will not give up.