Isolation, illness and caring for children and elderly parents can contribute to suicidal thoughts 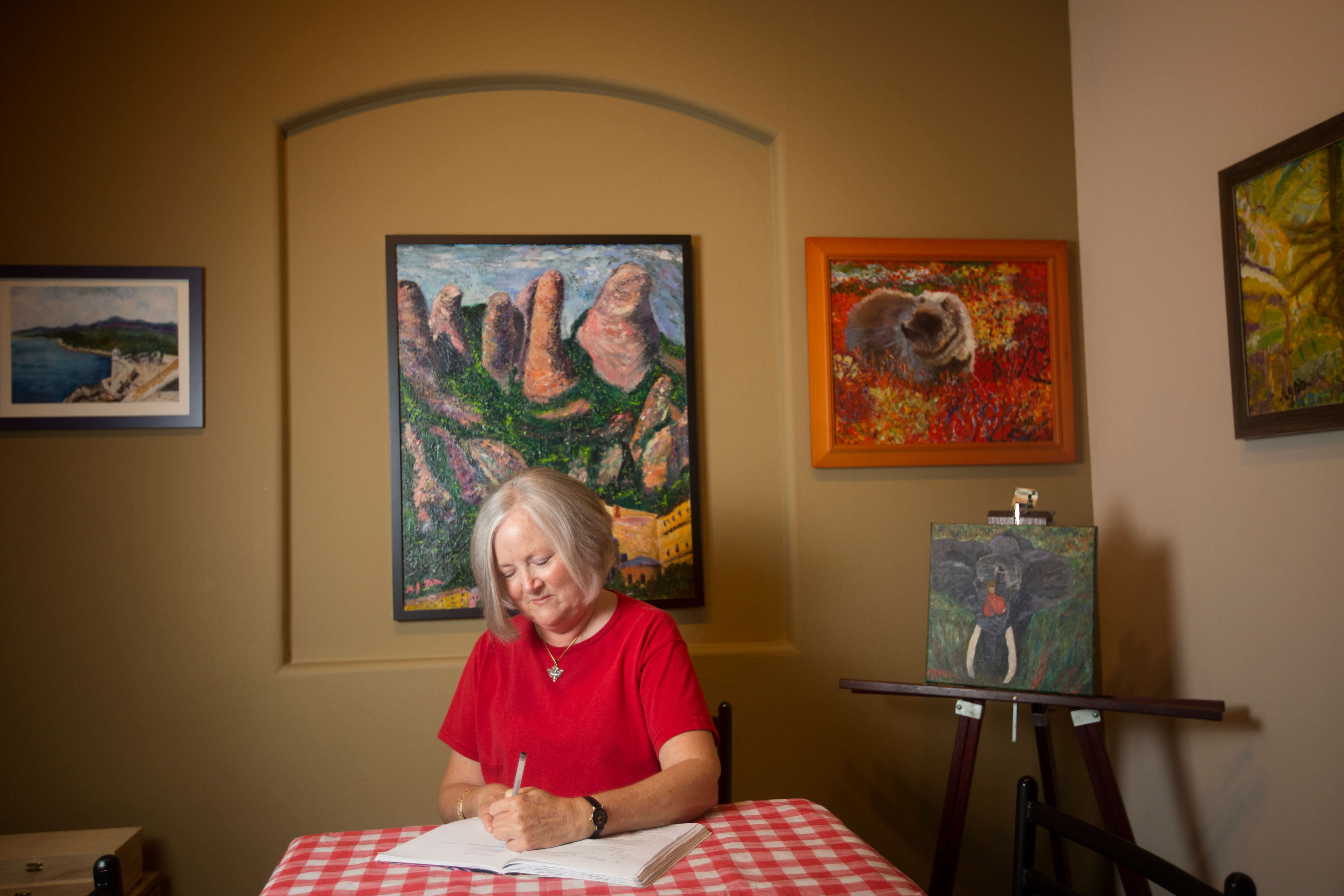 Mary Jane Pita had a tough 2002. After 25 years as a compliance officer at a bank, her once-comfortable life began to crumble when her husband’s construction company went under.

The couple were forced to file for bankruptcy, and Mary Jane felt she could no longer work at the bank where the loans she and her husband, Charles, had taken out for his business had been processed. At 50 and 69, respectively, the Pitas were not sure what to do next, so they took a chance and moved to Spain.

“We lost everything,” Mary Jane said. “The only things I have from my previous life are the clothes and suitcase I packed it all in.”

Once in Spain, troubles continued to plague the couple.

“One night, I was robbed as I was walking, and they stole my purse,” Mary Jane recalled. “I had my debit card in there and because I could never remember anything, I had to write down my PIN number with the card, so they took everything. My husband was just really mad. I thought, ‘This is all I can take— I’ve had it.’”

Soon after the robbery, Mary Jane tried to commit suicide, the first of three attempts.

“I took pills and I had to go the hospital,” she said.

“Nobody knows why people commit suicide,” said Asim Shah, M.D., professor and executive vice chair in the Menninger Department of Psychiatry and Behavioral Sciences at Baylor College of Medicine. “Obviously we can’t go in the mind and see what happened. One theory that is widely accepted is that suicidality is an act of impulsivity.”

Mary Jane was 50 years old at the time of her first suicide attempt, more than a decade before she sought help at The Menninger Clinic.

The recent suicides of fashion designer Kate Spade, who was 55, and celebrity chef Anthony Bourdain, who was 61, have shined a public spotlight on suicide in middle age.

“This is the age group that has the maximum risk,” said Vineeth John, M.D., professor and vice chair for education in the Department of Psychiatry and Behavioral Sciences at the McGovern School of Medicine at The University of Texas Health Science Center at Houston. “The group with the highest risk is around age 45 to 55 and then those over 85, but the question is, why at that age?”

To answer his own query, John explained the U-shaped happiness curve over the course of a lifetime. We tend to start our lives happy, but that contentment begins to wane around 18 and then reaches a low in our 40s, he said. In our 50s, happiness levels often begin to rise again and keep going up, though they may drop in the final years of life.

Instability in the workplace, ageism, relationship fractures such as divorce or the death of a spouse, children leaving home and chronic illness and isolation are among the conditions that can make middle age a vulnerable period in a person’s life.

One of these difficult situations, combined with impulsivity, can lead to a suicide attempt.

“A lot of people are focused on the epidemic of youth suicide in our country, where, between the ages of 15 and 19, depending on the year, suicide is the second or third leading cause of death,” explained Jonathan Stevens, M.D., a psychiatrist and clinical director of The Menninger Clinic’s outpatient services and assistant professor of psychiatry at Baylor. “What people
don’t realize is that depression over the ages of 60 or 65 increases dramatically.”

Mary Jane struggled with mental health issues for decades, but she and her family often brushed her “episodes” under the rug.

“Back in the ’60s and early ’70s, my parents’ divorce really affected me, and, at times, I was depressed and fearful and all of this led up to my suicide attempts,” she said. “A lot of people noticed things about me, but at that time no one really knew much about depression and it wasn’t talked about or brought up.”

“I think the baby boomers, especially compared to millennials, are less inclined to talk about these issues,” Stevens said. “And we don’t necessarily have the champions publicly that we have in younger folks … I struggle to think right now, who of that generation is talking about their struggles with depression and suicide.”

Stigma still surrounds mental illness and no matter how much money or fame people have, they may not open up and tell anything to anybody, Shah said.

“Now we know that Kate Spade was struggling with depression for a long time, but seeking private help is very different than seeking public help,” he said.

Baby boomers are also more burdened than other generations.

“Many of the patients I see are also supporting other family members,” Stevens explained. “In your 60s, you may be caring for an aging parent, a spouse and caring for a child in their late 20s or early 30s. There are all of these factors and sometimes that is why they are not accessing the care they need.”

This was the case for Mary Jane Pita.

Upon returning to the U.S. after four years in Spain, Mary Jane and her husband moved to Houston to care for Mary Jane’s father and stepmother—her stepmother was suffering from dementia.

“I was taking care of the house, her grandson, taking care of all the business, and it just got to be too much,” she said. “My father thought, ‘Well why can’t you find another job, something must be wrong with you.’ He was very hostile.”

“I did try, but every time I went in a bank, it was just filled with young people,” she said. “It was also hard to explain the gap in my employment. … They thought I had just taken a big vacation.”

After a major disagreement with her father, Mary Jane attempted suicide for the second time, in August 2007. Once again, she reached for pills.

After that, Mary Jane was placed in inpatient care at a Houston facility, but was not seen by a psychiatrist until one came by to discharge her.

Mary Jane attempted suicide a third time in October 2007, and was formally diagnosed with depression.

“I think it was just being unable to cope with things,” she said. “I was thinking every time that my family would be way better off without me. And that wasn’t the case, but I got this idea that I was so bad and I thought I was creating all these issues and problems for my family.”

In severe cases, people can rationalize suicide as an option, Stevens said.

“It has an internal logic, even though you and I may not view that as a rational decision,” he said. “They are saying, ‘I can’t really work, I can’t get out of this, I am in all of this pain that makes every day very difficult.’”

After an evaluation at The Menninger Clinic in 2016, Mary Jane was diagnosed with bipolar disorder—not depression—and finally started to get the treatment she needed.

“When I first came to Menninger, I was without hope—I was at the end of my rope,” Mary Jane said. “I told Dr. Stevens I just didn’t know what was going to happen to me. It was like a dark tunnel, and I don’t know what would have happened if I didn’t go to Menninger. I might have tried to commit suicide again. I was very lucky because I was admitted to their financial charity program, and I can’t speak enough about how much it helped me.”

Many people mistake behavioral shifts—including a lack of interest in formerly pleasurable activities, as well as changes in energy, concentration, appetite or sleep—as a part of normal aging, but these conditions can be early warning signs of major depression, Stevens said.

Mental health experts agree that eliminating the stigma around mental illness will help people of all ages seek the help they need.

“Even the term ‘mental illness’ has a stigma,” Shah said. “Why can’t we call it brain health? Depression is a brain neurochemical imbalance and it is about the health of your brain.”

Today, Mary Jane takes medication that works well for her and attends weekly therapy sessions at Menninger. She is very involved in the community, charity work and enjoys creating art.

“I have been artistic for many years and, after my third suicide attempt, I signed up for art classes and I still paint to this day,” she said.

“It helped me so much because it is a creative outlet and it builds up a lot of self-esteem, too. I donated a painting to a charity for an auction and one of my paintings was auctioned off for $300 and that made me feel really good.”