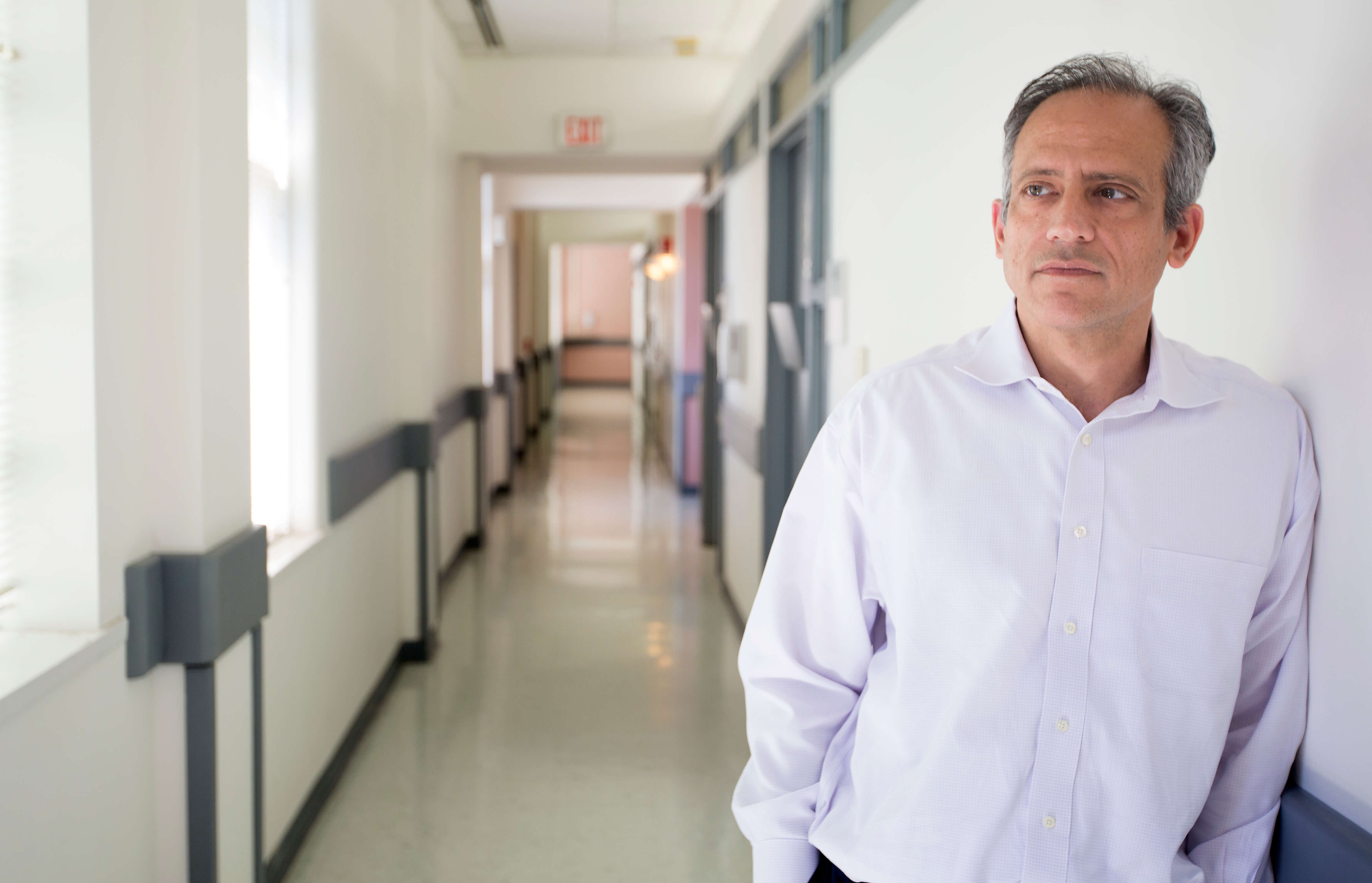 Sexually transmitted diseases (STDs) in the United States hit a record high in 2017, establishing a “steep, sustained increase” over the last four years and a discouraging trend after decades of decline that aligns with Texas STD data and the observations of Houston experts.

The Centers for Disease Control and Prevention released preliminary 2017 figures this week showing that chlamydia, gonorrhea and syphilis reached a combined 2.3 million reported cases, surpassing 2016 by more than 200,000 cases and representing a nearly 10 percent increase in one year.

“It’s an important moment to message that testing is available for everyone and you need to be aware of your sexual health and that you need to be tested,” said Paige Padgett Wermuth, Ph.D., M.P.H., assistant professor of management, policy and community health at The University of Texas Health Science Center at Houston (UTHealth) School of Public Health.

The 2017 surge marked the fourth straight year of increases.

Nationwide, chlamydia remained the most common STD reported to the CDC last year, with 1.7 million cases diagnosed. Nearly half—45 percent—were among girls and young women ages 15 to 24. Primary and secondary syphilis diagnoses nearly doubled over the four-year period, with more than half of cases among men who identify as gay, bisexual or sexually active with other men. Gonorrhea cases jumped 67 percent from 2013 to 2017. Officials expressed concern about gonorrhea growing resistant to treatment, with only one highly effective antibiotic remaining now in the United States. 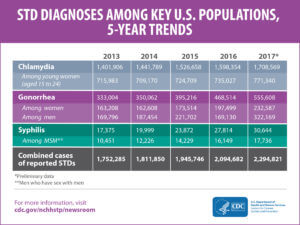 The preliminary 2017 STD figures were released during the 2018 STD Prevention Conference in Washington, D.C., where hundreds of sexual health experts convened this week. During a media teleconference, officials called the upward trend a “crisis” and an “epidemic,” while lamenting the uptick following decades of decreasing STD cases.

“Federal STD funding has seen a 40 percent decrease in purchasing power since 2003,” Harvey said. “That means that state and local health departments—most of which depend primarily on federal funding to support their STD programs—are working with budgets that are effectively of what they were 15 years ago.”

Harris County and Houston are historical hot spots for the trio of infections outlined in the national analysis. State numbers for 2017 are expected to be released in September when the full CDC STD surveillance report is available.

Chlamydia, gonorrhea and syphilis numbers and rates rose sharply from 2009 to 2016 in Harris County, with chlamydia showing the steepest numerical incline, from 17,719 cases in 2009 to 26,931 in 2016—a 52 percent increase. Gonorrhea cases jumped 49 percent and syphilis by 46 percent over the same period.

“That is disconcerting to us because it tells us that people are acquiring disease and if they don’t get treated, they can spread it to other people,” said Michael R. Thomas, M.P.H., a CDC public health advisor who has been embedded with the Houston Health Department’s Bureau of HIV/STD and Viral Hepatitis Prevention for more than two decades. “To be able to combat that, we are going to need the resources … and that’s why you are seeing the uptick in syphilis, gonorrhea and chlamydia.”

Thomas also attributes some of the challenges with surveillance, partner identification and treatment to the ubiquity of social media applications.

“A lot of the increase that’s going on now, particularly syphilis—but also other STDs—is because of social media,” he said. “People are now meeting partners on social websites. You have websites that promote coming into town, meeting somebody and you can have a relationship with that person. That person could be infected with syphilis or HIV or gonorrhea or chlamydia and transfer it to another person. The difficult thing about it is that the person goes on to the next place and these websites don’t keep names—there’s no way to go back and identify who that person is—so traditional partner notification efforts are not as effective.”

In her role as a principal investigator for the CDC-funded National HIV Behavioral Surveillance, Padgett Wermuth also worked on a study last year that offered chlamydia and gonorrhea testing to the local population of men who have sex with men.

“Houston has definitely been a pioneer in allowing testing to happen in the bars—not just in a mobile unit outside. This is so important to getting people to change the community norm about screening and about awareness,” she said. “From my work locally in Houston, I would say that people are aware that there are issues with chlamydia and gonorrhea and that people are interested in getting information and getting tested. You still have issues with sexual health awareness in general. We really should work on providing information on … who should get tested, when they should get tested, where they should get tested and how they get tested.

“In Houston, there is Legacy, Bee Busy, St. Hope, the Houston Health Department mobile clinics—all sorts of clinics available for free testing or sliding scale for people who are worried that they can’t afford it because that shouldn’t be an issue for anyone. There is available free testing and support.”

“I think health care systems and providers need to do more testing. There is plenty of evidence that people who should be screened for HIV and other sexually transmitted infections don’t get tested enough, so we need to add this on to routine care,” Giordano said. “Primary care providers and anyone, really, who is caring for a patient, should be screening for hepatitis, HIV and sexually transmitted infections. It’s not that hard to do.”

Giordano also is the longtime medical director of Harris Health System’s Thomas Street Health Center, one of the largest HIV clinics in the United States.

“Get tested and get treated. Ignorance is not bliss,” he said. “Some patients need to ask for testing because that will make the provider do the test, but providers need to take the initiative as well. People think they’re getting tested when they get routine blood work. They assume. We need to make sure we are thoughtful about this in approaching it from a very wide perspective to test people broadly. It’s no moral failing to test for HIV, syphilis, chlamydia, gonorrhea and hepatitis. It’s what we’re supposed to do.” 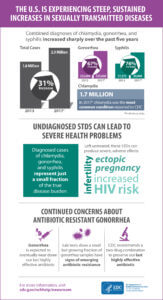