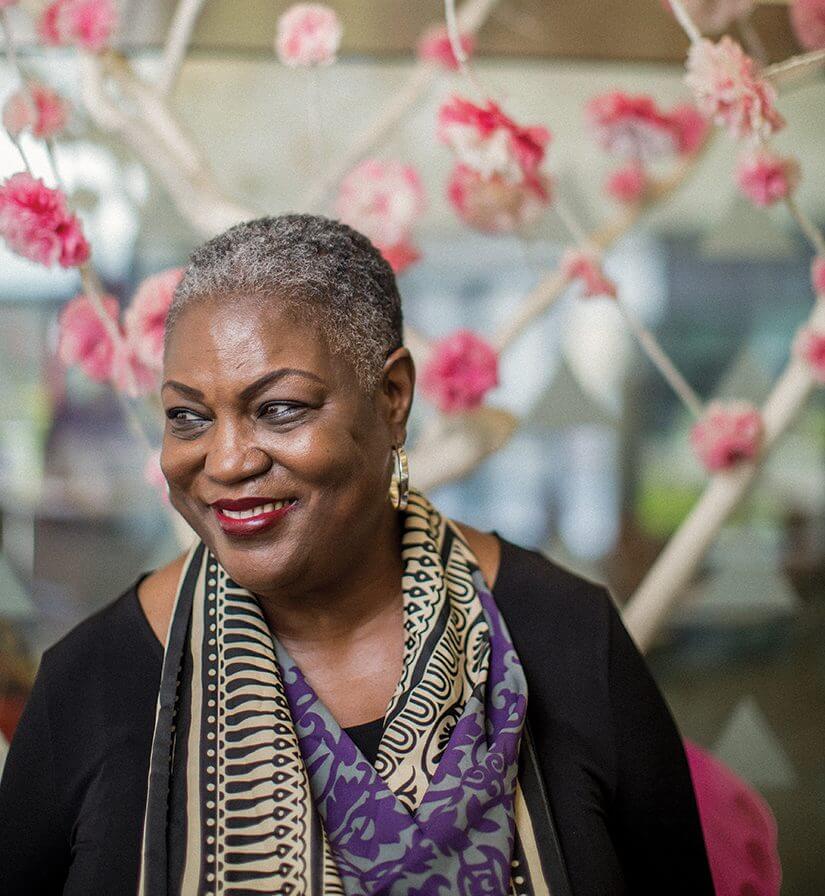 RHEA BROWN LAWSON, PH.D., a champion of literacy, education and history, has directed the Houston Public Library since 2005. Lawson oversaw the development and opening of The African American Library at the Gregory School in Houston’s historic Freedmen’s Town. During and after Hurricane Harvey, she became a disaster recovery leader when her team delivered laptops to the George R. Brown Convention Center so thousands sheltered there could file insurance claims. At the moment, she is advocating for a new “21st century” Central Library with an auditorium to house programs now held elsewhere in the city.

Q | During and after Hurricane Harvey, the library’s branch locations became safe, welcoming ‘lily pads’ amid flooding and chaos, providing Houstonians with connectivity and tranquility. What was your first instinct as library director when Harvey hit?
A | The main thing I wanted to do was get those libraries open because of the sense of normalcy for parents and children and the community members that had seen so much devastation. People had lost their telephones; they’d lost their computers. People who never used libraries suddenly found that libraries had a new use in their lives. One of our strongest services to the community is that we are the largest provider of free internet connectivity and access to computers. We never stopped giving service.

Q | How do you view the role of public libraries?
A | Libraries transform lives. A library is one of the last standing places where everyone is welcome. It’s a symbol of democracy. If you believe in equality and equity, you believe in libraries. No matter what your stage in life, the library is there for you. Expand your thinking about libraries. At one time, media was just books, but now it’s so much more than that and there’s so much more that’s needed. 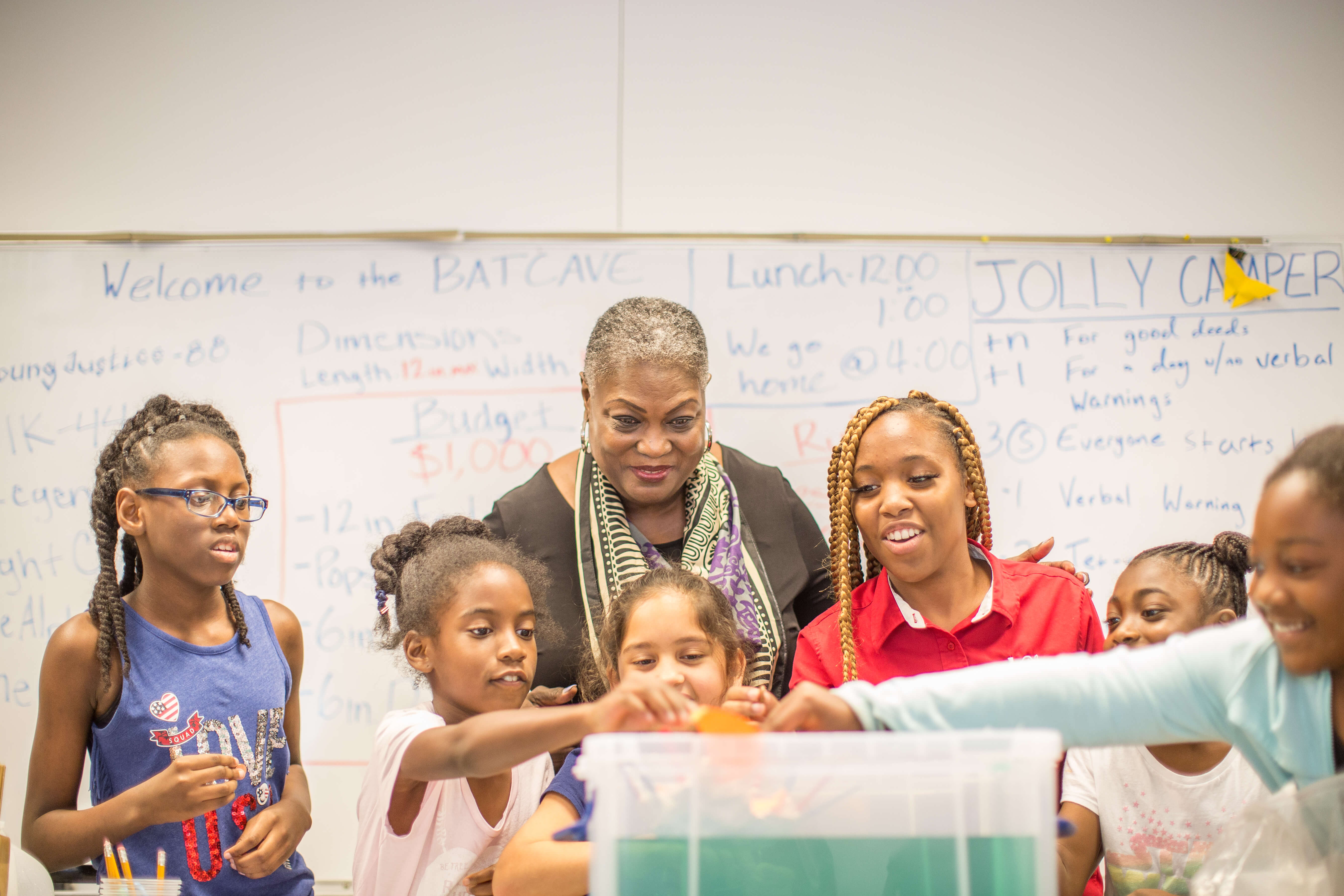 Q | What do you want people to know about the Houston Public Library?
A | People who aren’t necessarily readers of checked-out books—who buy their own books and have their own home libraries—might not think libraries are necessary until they come to one of our fabulous programs like Nikki Giovanni this year, which had 1,600 people who waited to see a world-class poet. Or, when we had Congressman John Lewis, a civil rights icon. We are a big player in terms of giving people access to nationally-acclaimed authors and personalities. It’s not always about the books, but about bringing history alive and giving people expo- sure. There are a number of people who pay for summer camp and are the first on the phone to get a free week with the library because they know the quality. For scholars, internationally, we have one of the deepest collections of Houston history with the Houston Metropolitan Research Center. We have a scholar-in-residence program at The African American Library at the Gregory School, in partnership with Rice University. We are deep and wide as the seventh-largest library system in the country.

Q | Where were you born and how did your upbringing lead you to become a bibliophile?
A | My heritage is Gullah, off the islands of South Carolina in the Lowcountry. Geechee. My parents were part of the Great Migration because there’s very little work and there’s very little industry, so they went north and landed in Maryland. That’s where I grew up—in Baltimore. My mother used to walk me to the library, the Broadway Branch, and it was very close to Johns Hopkins University. When I was a kid, Ms. Thelma Bell would read stories and she was mesmerizing in the way that she would tell a tale. When I started working at the library, Ms. Bell became my supervisor and mentor. Nothing is an accident.

Q | Why did you pursue a career as a librarian and library administrator?
A | I kind of stumbled into it. I went to Morgan State University and, after graduating, I wanted to go to Atlanta University. I wanted to be an African American history professor but didn’t have quite enough money to do that. So, I said I’d work and raise some money and go back to school. I ended up at the Enoch Pratt Free Library in Baltimore. I fell head over heels in love with the ability that libraries have to impact people’s lives. That’s kind of what teaching is. I was fulfilling something that I wanted to do, but on a broader scale. Before I knew it, five years had passed and a mentor said that if I was going to stick around, I might as well go get a master’s degree in library science. And I did—at the University of Maryland.

Q | What prepared you for the diverse customers you serve in Houston?
A | One of the jobs I had at the Enoch Pratt Free Library was being in charge of the literacy program. I submitted a proposal to make one of the branches a literacy center. We had the Broadway Lifelong Learning Center right across from Hopkins. Doctors would come to Hopkins and bring their families, who knew no English, to the library. We had this whole community that wanted to learn how to read. That stuff is ingrained in me. (I kept that idea and brought it to the Carnegie Neighborhood Library and Center for Learning
in Houston’s Near Northside.) I left Baltimore for the Ph.D. program at the University of Wisconsin-Madison, where I was teaching multicultural library services and public libraries in urban centers.

Q | How has being a mother and, now, a grandmother influenced your work?
A | My grandson, Nigel, who is 91⁄2, is autistic. The Children’s Museum of Houston has a morning when people with disabilities can come free of charge and the mothers and caregivers can bond while the children can just be free to be. We have the Pop Up Library TOO for kids with special needs and people invite us into spaces. You are influenced by experiences that you have. We found that my grandson’s strength is technology and math. Learning that he was autistic made me dive into that world as a grandparent to be supportive of my daughter, Ebony, who is fabulous. She is working on her second master’s at Johns Hopkins in the development area to bring affordable homes to communities.

Q | What do you consider your landmark achievement as the city’s chief librarian?
A | The Gregory School, when I arrived in Houston, was all boarded up. It was the first school for ‘colored’ children in Houston. Then-Mayor Bill White said I had to make that the African American library and I said, ‘No problem.’ I still point to the Gregory School as my best work because I did it with such passion and love.

“Libraries transform lives. A library is one of the last standing places where every- one is welcome. It’s a symbol of democracy. If you believe in equality and equity, you believe in libraries. No matter what your stage in life, the library is there for you.”

Q | What are your goals at this point in your career?
A | We need a new central library because Houston deserves it. While I love going to the University of Houston and Alley Theatre and Texas Southern University to do our programs, why can’t we have our own auditorium? What would be a more welcoming space than a 21st century central library? A new library is about understanding the city and understanding the problems of the city. We have a woefully inadequate budget that got decimated even more during the recession and is still trying to crawl its way back. The victory that I have in this position is that I have an amazing team and we continue with ‘One Houston, One Library,’ where we are looking at equity. We want libraries across the geography of the city to have top-notch service and fully adequate staff.

Q | What is the mission of the Houston Public Library Foundation?
A | The Houston Public Library Foundation raises money for us to do programs. The foundation finds sponsors for programs including Camp STREAM—which stands for science, technology, reading, engineering, arts and mathematics. It’s a week-long, free summer camp. The foundation needs greater support.

Q | How can people in the community provide more support to the Houston Public Library?
A | If they want to make a difference in communities across Houston, invest in the library because we are everywhere. Whether you need a gathering place, if you want to make an impact on latchkey kids after school, if you want to invest in helping our collections grow so that they will be more robust for the researcher or make story times available for emerging literacy, we’re that place.