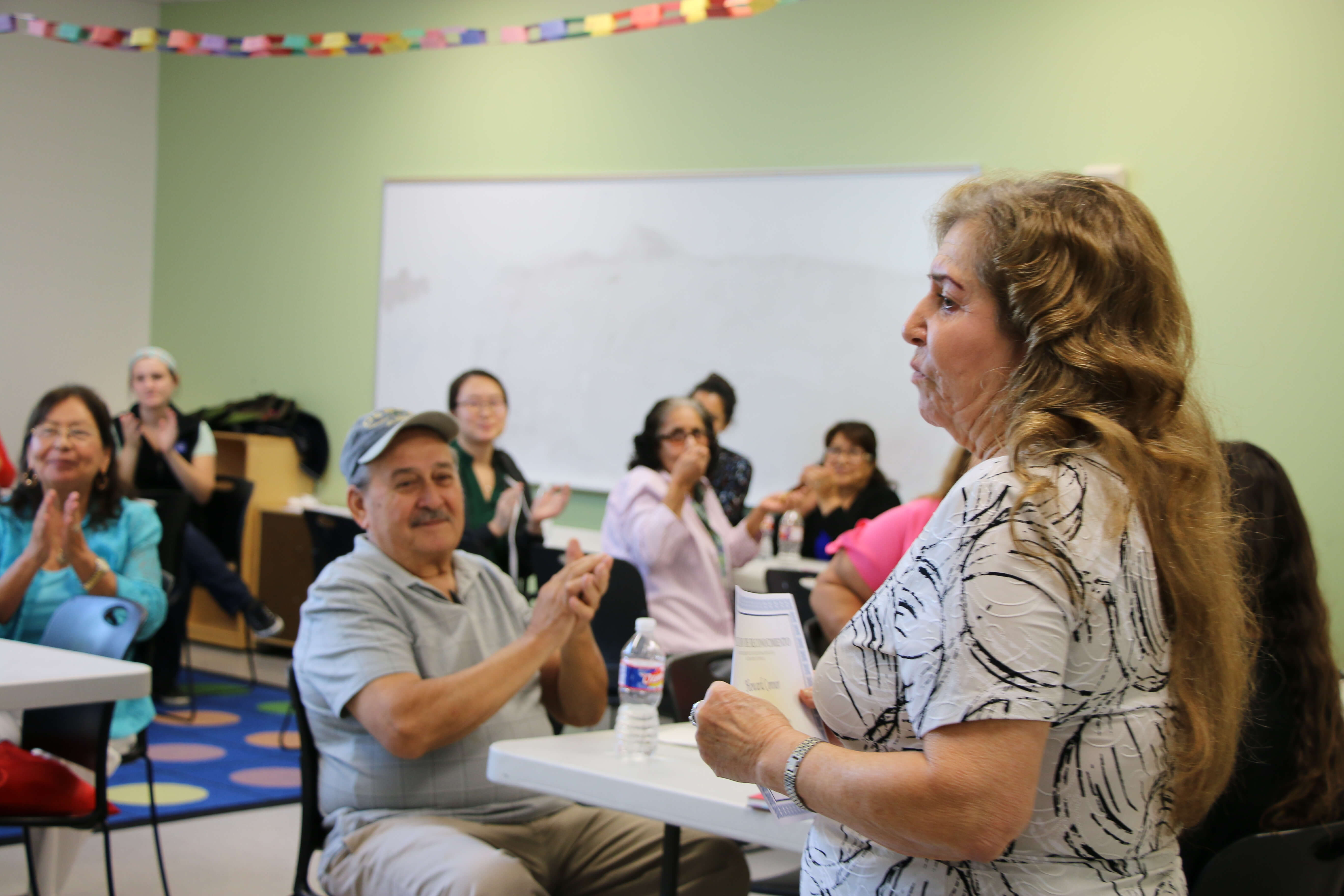 Seventy-five-year-old Delfina Colina sat with Kelsey Bezner, a physician assistant student at Baylor College of Medicine’s School of Health Professions, in a classroom at the BakerRipley Ripley House in Houston’s East End neighborhood. The two spoke in Spanish, thanking each other for the last two weeks, during which time each gave the other a valuable gift.

Bezner had enrolled in the Spanish elective course offered to Baylor physician assistant (PA) students immediately after their first year of classroom training and preceding clinical training. The immersive two-week program pairs a PA student with a Spanish-speaking senior citizen in the community and encourages hands-on practice and learning. Bezner and Colina had been matched up, and the two couldn’t be more thankful.

“She’s been very patient with me,” Bezner said, looking at Colina. “In the beginning, I could not speak Spanish at all, and now I feel like I can—I’m much more confident.” 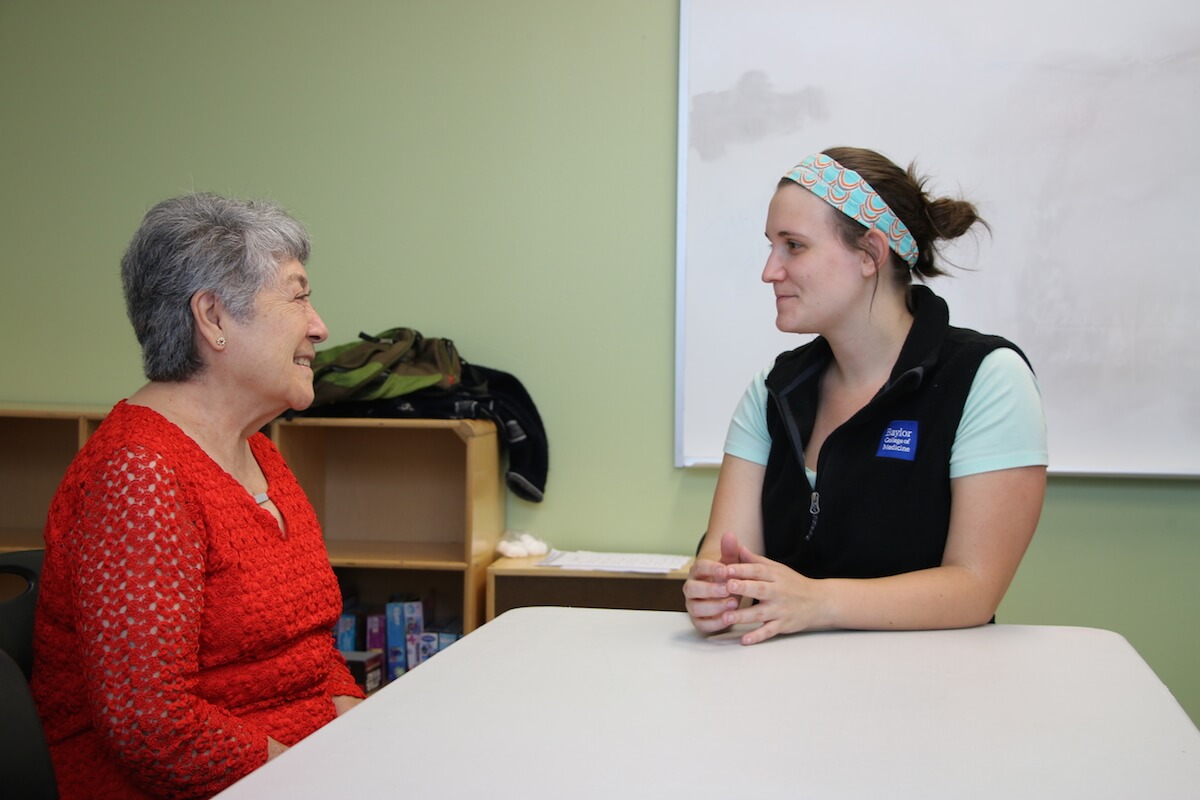 The program is directed by Guadalupe Quintanilla, Ed.D. She has been teaching a version of the class for more than 45 years, helping students in the health professions learn words and phrases in Spanish that anticipate the types of interactions that might take place in a clinical setting. She teaches common medical terminology and how to perform a complete physical in Spanish.

“It doesn’t matter where you go, in Houston, you’re going to have people who do not speak English, so these students are going to be an incredible help to their community. They’re going to open roads of communication, and I think that is so important,” Quintanilla said.

The seniors who volunteer to be a part of the program act as patients for the students and are told to speak only in Spanish—even if they know English or other languages.

“Our volunteers from the community sit with the students and they even bring their medications,” Quintanilla said. “I tell them, ‘You have every ailment under the sun, and if you do not have anything, make it up.’ The students have to communicate with the volunteers in Spanish, and this is the closest that we can get them to the actual work they’re going to be doing. The students bring their equipment and they take their blood pressure and they listen to their heart and they make them stand for balance—everything they need to do in the field, they can do here. It’s real, hands-on practice.”

The PA students found the class to be extremely helpful.

“Not only can we speak the terminology now, but we can also understand our patients,” said Tushar Patel, one of the PA students. “Even now, when we go to Ben Taub to interview patients, we find that there are a lot of patients who only speak Spanish.”

“I learned more in two weeks than I did in high school Spanish for two years,” she said.

The program offers benefits to the Spanish-speaking volunteers as well.

“This is just one of the examples that speaks to the importance of working and connecting seniors to different communities,” explained Frida Villalobos, director of communications for BakerRipley, which focuses on helping neighborhoods in the Houston community through learning opportunities, civic engagement and more. “The intergenerational perspective—that the seniors are working with students from different age groups—I think it’s great. They build relationships, they build bonds, they build friendships, and it’s a way for them to give back, because they want to feel empowered and they want to have the opportunity to be able to do something for their community.”

Bezner said the course has helped her feel more confident talking to patients and that she hopes that patients will feel more comfortable with her.

“That was really the goal, for me to at least be able to initiate conversation and to fill in the blanks and to show my patients that I know what I’m doing and that I am respecting their culture,” Bezner said. “It’s pretty amazing how much you can learn in two weeks.”

“This program, for me, I really enjoy it, because I am so old and they made me feel useful to people, and that made me feel, inside, strong,” she said. 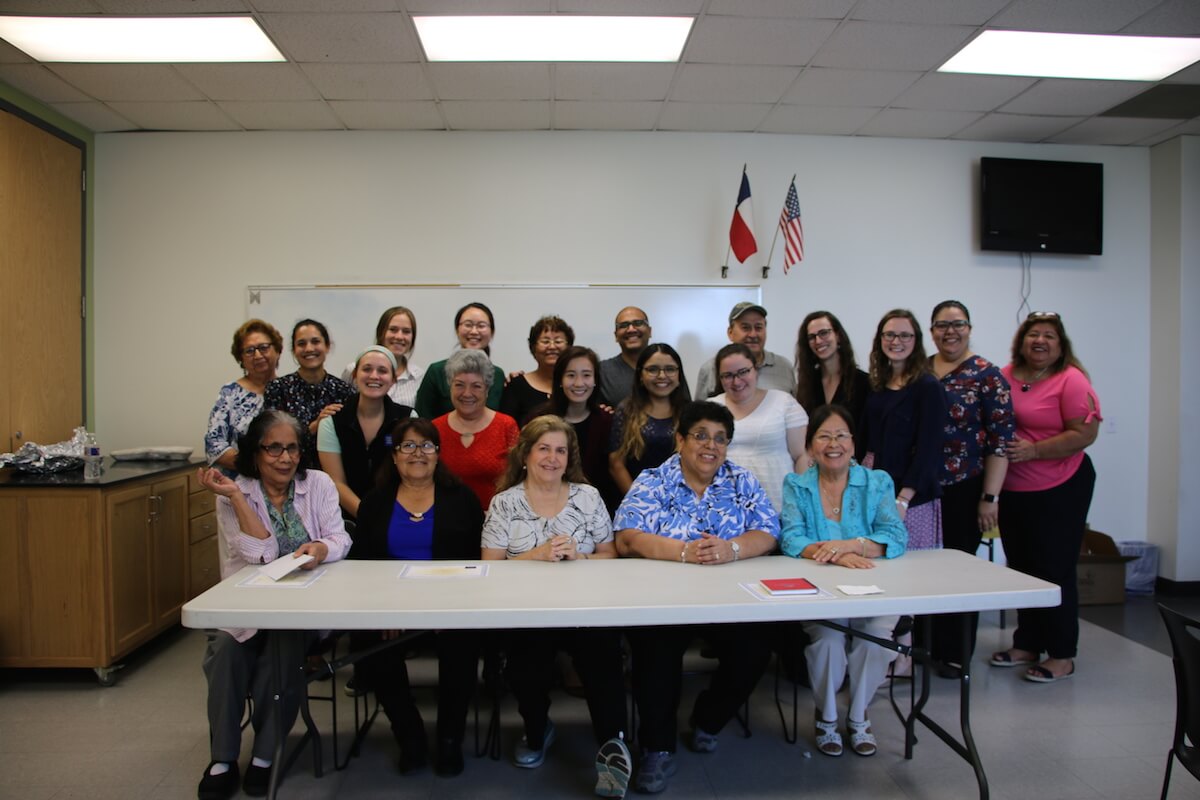 The group poses for a photo taken at the luncheon on Friday, Aug. 3. (Credit: Bethany Strother, Baylor College of Medicine)