The Patient Who is Studying to be a Doctor

The Patient Who is Studying to be a Doctor 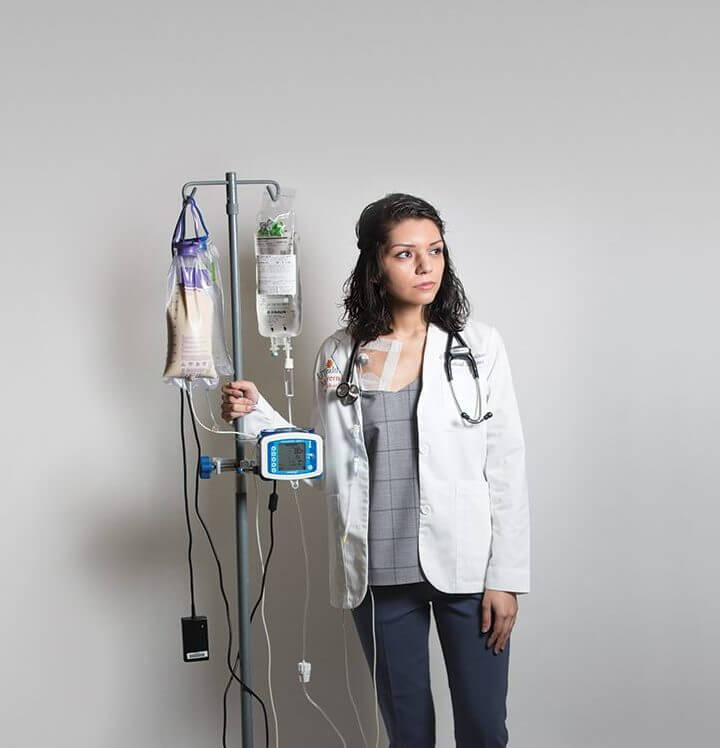 What keeps me alive? High-calorie liquid nutrition—aka Nutren 2.0—running continuously through my feeding tube into my small intestine, and IV fluids running through my port into my heart.

I’m not your typical medical student. Beneath my white coat lives a patient.

In 2011, as an undergraduate, I was diagnosed with Chiari malformation, a condition in which a portion of the cerebellum herniates out of the bottom of the skull and compresses the brain stem, and Syringomyelia, the development of a fluid-filled cyst within the spinal cord. Since then, I’ve undergone six major brain surgeries, multiple shunt surgeries, multiple feeding tube and port surgeries, as well as countless procedures and hospitalizations. Along the way I’ve been diagnosed with hydrocephalus (a buildup of cerebrospinal fluid in the brain), trigeminal neuralgia (a chronic pain condition that affects the fifth cranial nerve), adrenal insufficiency (a condition in which the adrenal glands do not produce adequate amounts of steroid hormones), gastroparesis (partial paralysis of the stomach) and a tethered brain stem (in which the brain stem becomes pinned to the dura, or outer covering of the brain). 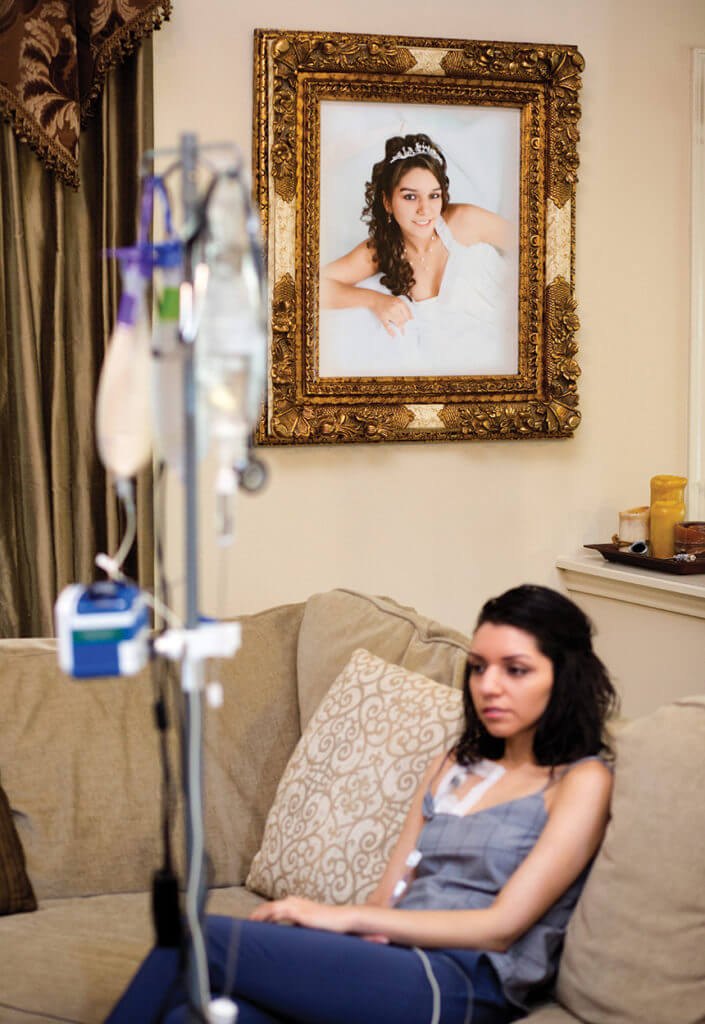 Martinez, who spends four to six hours each day at her home infusing IV fluids, sits on the sofa under her “Sweet 16” photo.

On Feb. 6, 2017, my life was forever changed. I went into the operating room as one person and came out as another. Although I’m no stranger to brain surgery, this time was different. I underwent an experimental surgery to untether my brain stem, which had attached itself to the outer covering of my brain and was pulling some of the surrounding cranial nerves along with it. Because of this, my vision was compromised and I had lost nearly all muscle control in my pharynx and esophagus, making it extremely difficult to swallow. My body was deteriorating. After searching the literature, I found only a handful of patients who had undergone this surgery, and most of the cases didn’t end well. With all odds against me, I agreed to this risky operation.

As I awoke from surgery, the doctors and I quickly realized something was wrong. Although the surgery was successful, I had suffered a stroke to my brain stem during the operation, leaving me, initially, unable to function from the neck down. I couldn’t sit up on my own, move to turn in bed, walk, bathe or dress myself. All I could do was lie in bed. My dream of becoming a doctor felt like it was shattering before me, once again, but I’ve never allowed my health to keep me from continuing my journey and I wasn’t going to let it start now.

After a few weeks, I was transferred to TIRR Memorial Hermann to undergo intense inpatient neurorehabilitation. Each day was filled with physical, speech and occupational therapy, among other activities. Every simple thing we do and take for granted in everyday life I had to relearn. Absolutely everything. When asked what my goal was, I always said, “I just want to be able to take care of patients and go back to school to become a doctor.”

I spent many months at TIRR Memorial Hermann, first working on gaining the strength to sit up unassisted and then slowly advancing to standing on my own. The REX robotic exoskeleton was one of the devices that helped teach me how to walk again. The days were hard, long and, at times, frustrating, but every sensation and movement gained was rewarding.

As a medical student, I still had tests to study for and assignments to complete. Initially, I couldn’t operate my computer, write or even turn the pages in a book. When I could finally see clearly and listen, my mother placed ear buds in my ears and played lectures for me to watch. She typed my essays as I called out my thoughts, turned the pages in my books and wrote my notes. We started studying early—before my doctors came in to round and the long days of therapy began—or stayed up late after exhausting days. It was extremely difficult, but I was determined.

Many people couldn’t understand why I never wanted to take a break from school. While in the hospital, I didn’t watch movies or take naps. I studied. God has always preserved my intelligence during my many brain surgeries, and I wasn’t going to waste that precious gift. My brain, at times my greatest challenge, was my biggest ally in continuing my path to become a doctor.

Over the past seven years, doctor’s offices and waiting rooms have become my school. I’ve always wanted to become a doctor, but I never thought I’d be working toward a medical degree while being a patient, as well.

I always hoped for the day I’d be cured, when I’d no longer be the patient, only the doctor, because for so long I was made to believe the two could not exist at the same time. You are one or the other—the patient or the doctor.

I am now starting my third year at McGovern Medical School. As I sit here in the hospital waiting to see the next patient, wearing a white coat and a stethoscope around my neck, I, too, look like a patient. I carry a heavy backpack containing liters of IV fluids, nutritional feedings and a feeding tube pump, heparin and saline flushes, syringes, dressings, caps and sterile swabs.

A tube from my port that goes into my heart and a feeding tube that goes into my small intestine tethers me to this backpack. My gait is abnormal and my hand function is quite limited. But as I contemplate my situation, there is a part of me that hopes I am never cured. Perhaps I am not meant to be a “normal” doctor, but a voice to bridge the gap of those who are solely doctors and those who are solely patients. 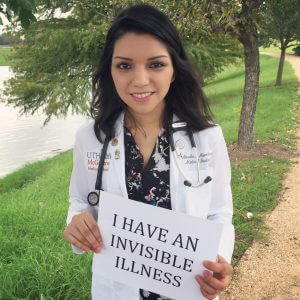 Claudia Martinez is an ambassador for Fight Like a Warrior (fightlikeawarrior.org), an organization that unites people with chronic and/or invisible illnesses. (Credit: courtesy photo)

Over the years, some doctors, professors and advisors told me to quit medical school. They said, “Your medical history is too extensive,” and “You don’t have the functioning you need,” and “It is impossible for you to continue school while being a patient in the hospital so much.” Some said, “If you do continue, you need to hide the deficits and illnesses you have.”

I remember one neurologist walked into my hospital room and asked everyone to leave. She sat down at the foot of my bed and looked me straight in the eye and said, “Claudia, you have to give it up, you can’t be a doctor.” After telling her I disagreed, she told me, “Look at where they are and look at where you are.” (“They” referred to my classmates who were rounding with her on my case.) “Lift up your legs!” she yelled. “Lift up your legs!” At the time I couldn’t move my legs. “See, you can’t even lift up your own legs. You can’t even take care of yourself. How can you take care of a patient?”

All these years, I wish I had known someone fighting a serious illness while also trying to get through college and medical school—someone to look up to, to show me that it is possible. I’ve been sharing my story on social media for six years in the hopes of finding others like me. And I’ve found that just because people like me are underrepresented doesn’t mean that there aren’t a few of us out there. They, too, were told to hide.

You may see a young woman who has overcome adversity with resilience, time and time again, but I hope you also see a woman who is only human, a woman with a disability and medical history neither she nor her doctors can change, a woman who is good enough to become a doctor, despite everything.

I’m here to represent and bring light to those in the medical profession who have a disability, who battle health issues, who have been underrepresented for far too long. As health care providers, we’re not immune to illness. We should embrace individuals on both sides of medicine because they bring unique perspectives to the field and serve as a bridge between doctors and patients.

To those, like myself, who find themselves on both sides of medicine, remember this: They say there is light at the end of the tunnel, but I’ve learned there may never be a true “end” to a medical condition, that the light may stay beyond our reach. But, perhaps, this is when we should create light for ourselves, to encourage others to see us just as we are, to show how we can shine despite the darkness.