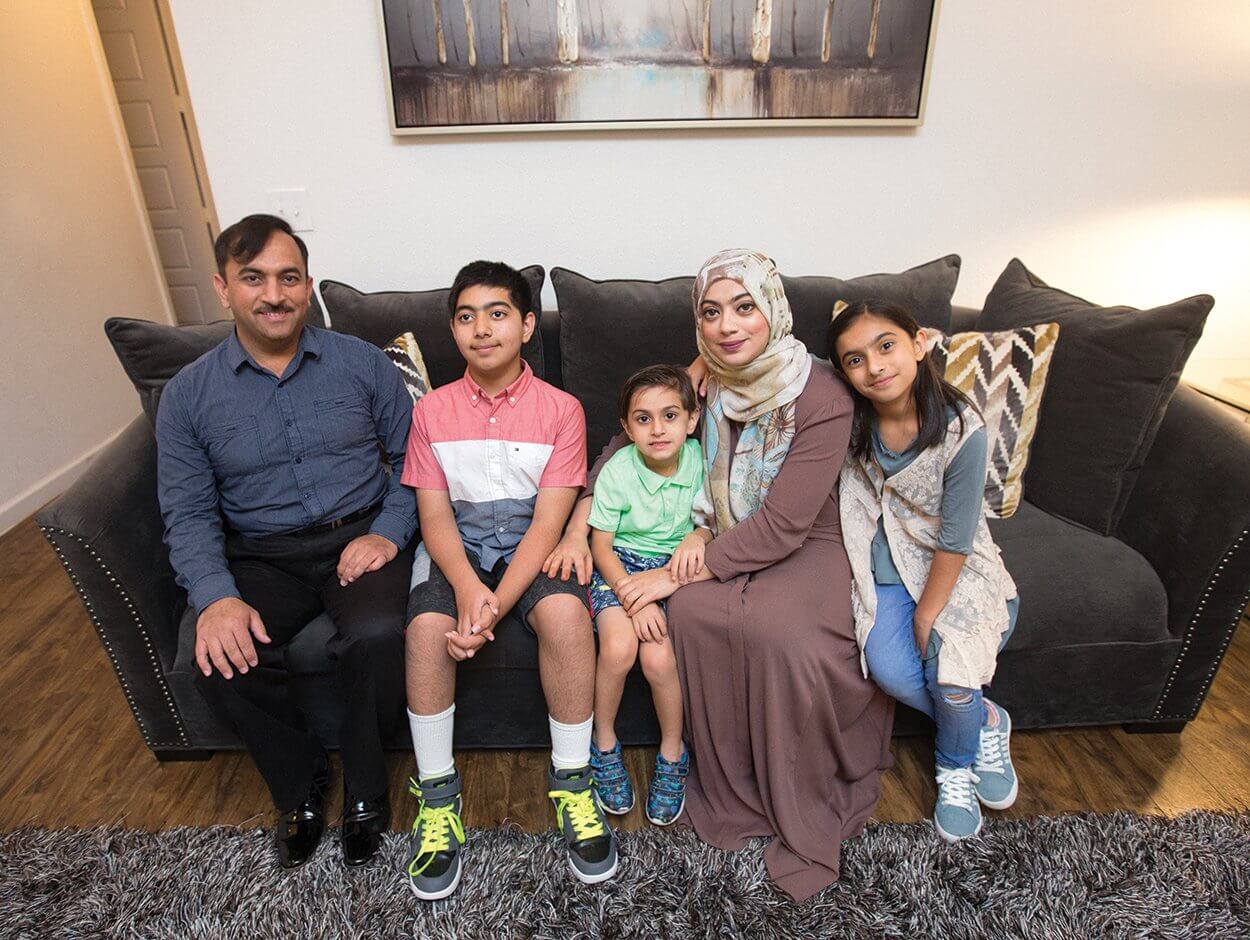 His parents describe it as a miracle—a gift from God. Just six months ago, Umair Majeed, now 12, was suffering from debilitating seizures multiple times a day. But last November, Sandi Lam, M.D., a pediatric neurosurgeon at Texas Children’s Hospital, performed an endoscopic hemispherotomy as a surgical treatment for Umair’s worsening epilepsy. A first for both the surgeon and the hospital, the innovative, minimally-invasive approach to the procedure has only been reported by two other institutions worldwide.

Sitting in their living room in Conroe, Texas one evening in late May, Umair’s father, Ashif Majeed, and mother, Bushra Majeed, spoke about their son’s transformation since the successful operation. Although the family was fasting for Ramadan, they had set out food for guests—dates and yogurt-covered raisins, walnuts and Gatorade, and a large box of chocolates their youngest had won in a fundraiser for their mosque. They were eager to share every detail and overwhelmed with gratitude for their son’s renewed health.

“There have been no seizures, or any symptoms of seizures, either,” Ashif said. “Before, he was having seizures, headaches and vomiting all the time. The situation was becoming more complicated. First, it was once a month, then once a week, then every other day, then in a single day, five times, so it was a really scary situation for us.”

To make matters worse, Umair’s epileptic episodes would often result in physical injuries. He had to wear a helmet because of his frequent unpredictable falls from seizures; during Hurricane Harvey, he broke his arm after having a seizure in the bathroom, and clinicians at Texas Children’s Hospital The Woodlands had to guide a frantic Bushra by phone around the flooded roads so that she could reach the emergency room.

His medications, it seemed, were no longer effective.

Ashif, a veterinarian originally from Pakistan, explained that Umair had suffered a stroke at birth that damaged the left side of his brain and rendered the right side of his body weak. But until 2014—the first time Umair was paralyzed with a seizure—the effects of this right-sided weakness were a manageable part of his daily routine, so his level of disability had been minor. As his episodes worsened, however, physicians at Texas Children’s Hospital became convinced that surgery was Umair’s only shot at a normal life.

“We wanted to give a better life to him,” Bushra said. “There was no solution except for surgery. They were increasing the doses of medicine, but it wasn’t helping.” 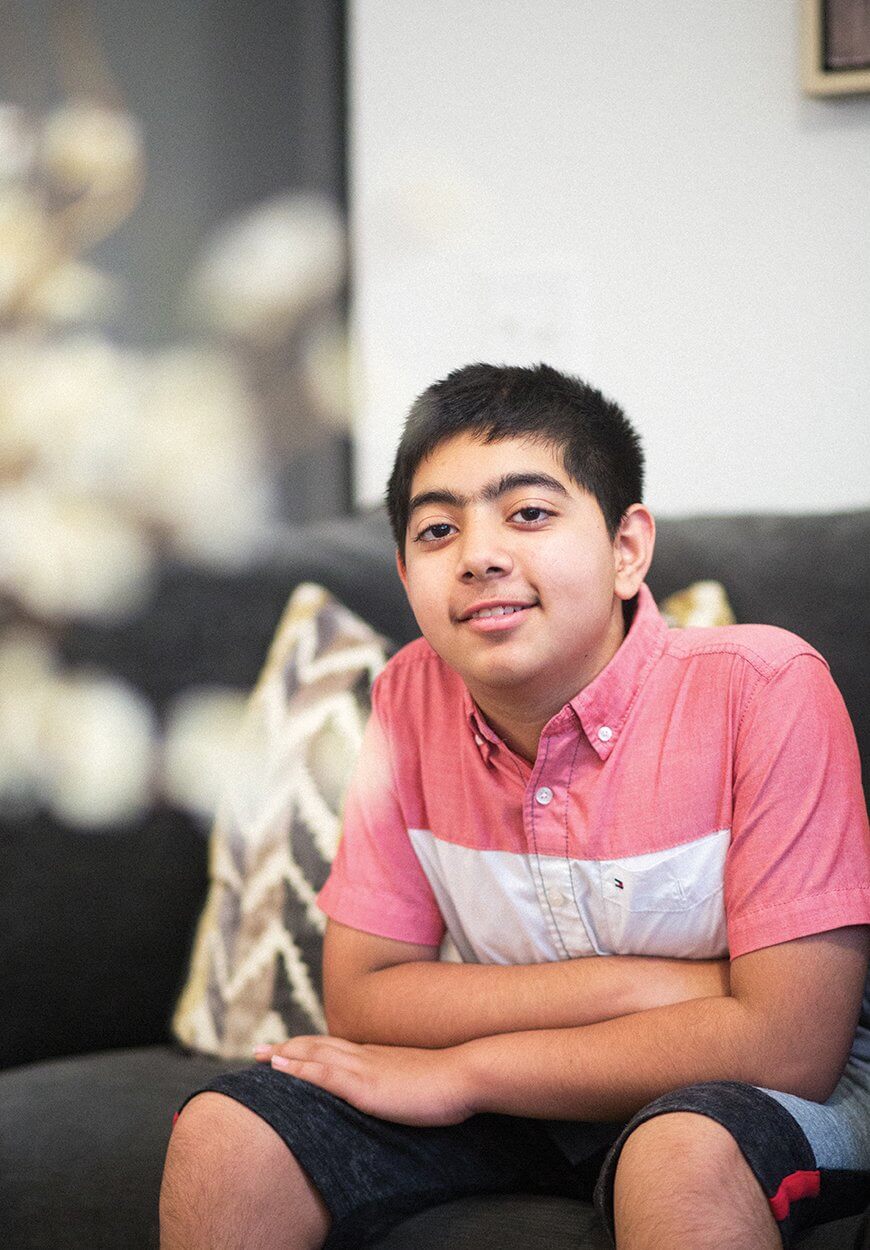 Umair Majeed, 12, was the first patient at Texas Children’s Hospital to undergo an endoscopic hemispherotomy for the treatment of his epilepsy.

Because Umair’s seizures originated from just one side of his brain—the side that had been damaged by a stroke when he was a baby—he was an ideal candidate for a surgery in which one side of the brain is either removed (called a hemispherectomy) or completely disconnected from the other side (called a hemispherotomy) in an effort to detach the rest of the brain and the body from the problematic area causing seizure activity. Seizures arising from the diseased side of his brain would no longer be able to spread to the unaffected half of the brain, thus allowing the healthy side of the brain to function to its full potential.

Hemispherectomy and hemispherotomy surgeries have been performed for decades by select neurosurgeon specialists. They typically involve a large, question mark-shaped incision on the top and side of the head through the scalp, and are frequently associated with a long recovery, swelling, postoperative pain, substantial blood loss and, often, the need for a post-surgical shunt to help drain accumulated fluid.

But Lam, one of just a few specialists who has performed a large number of traditional open hemispherectomy and hemispherotomy surgeries, believed there could be another option: a less invasive way to achieve seizure freedom.

Before she met Umair, Lam had been working for months on a novel technique to do hemispherotomies through smaller surgical access points, reasoning that a smaller incision would mean easier recoveries for her patients. She gathered tools already found in the operating rooms at Texas Children’s for other minimally invasive procedures, and prepared by working in the surgical anatomy and cadaver lab at Baylor College of Medicine. She also developed contingency plans alongside the technique so that her team could fall back to the traditional “open” method once the surgery began, if necessary. When she reached a point where she felt she could perform the procedure with the new, minimally-invasive technique, she waited for a patient whose condition would lend itself to the highly specialized operation.

“It was kind of a journey in responsible innovation,” Lam said. “Instead of just trying this in any patient, we actually developed it in the surgical anatomy lab, and then very carefully picked our first cases based on who had the anatomy that would really be the most amenable to this type of surgery. It’s my job to worry and it’s my job to be able to fix things, and Umair’s anatomy, and his specific condition worked very well for this minimally-invasive technique.” 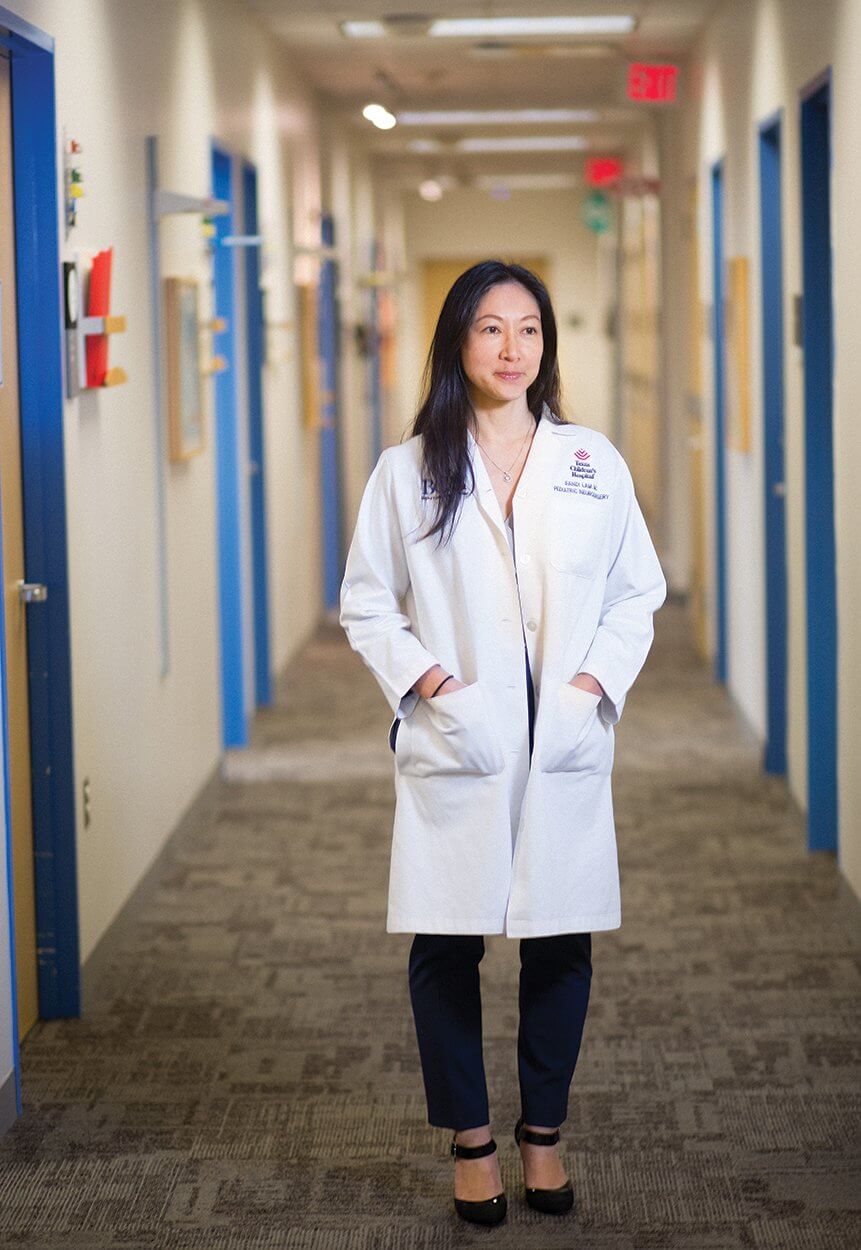 Sitting on the couch surrounded by his family, Ashif recalled the evening before Umair’s surgery—when he was ready to cancel everything.

“The day before the surgery, they called us because they needed more blood for analysis, and I took him but thought, in the morning, we will not go back. Those were my inner feelings,” Ashif said, remembering how nervous he had been. “Then I came home and [Bushra] told me we have to go. I prayed to God and I got a little courage, and now he has a new life.”

Umair’s surgery began on the morning of Nov. 22, 2017. Rather than cut a larger incision around the top and side of the scalp, Lam made a straight, 5-centimeter incision in the skin. Through that, she created a small opening in the skull bone, about 2 centimeters by 4 centimeters, on the top of Umair’s head, where she used an endoscope to see deep inside his brain.

With specialized microneurosurgical instruments and what look like extra-long tweezers, Lam carefully disconnected one of the brain’s hemispheres from the other in a multi-step process. This method would ensure that the frequent seizures from the diseased, seizing, left side of the brain would not spread to the healthy right hemisphere.

The surgery lasted six hours. Umair’s parents said that when Lam emerged from the operating room, she seemed both exhausted and elated. As for them, the surgery’s success, and Umair’s recovery, exceeded their wildest expectations.

“We were scared the wound would remain open and his face would remain swollen for days, that the recovery would take a few months. But with this technique, the recovery is just a few days,” Ashif said. “He was out of bed within a day, and he was only in the hospital for about a week. They had said one to three months and that he should have homeschooling for six months, but he was home the ninth day and in school after about a month and a half.”

Umair said he feels much better now that he no longer has seizures, and he is thrilled to have shed the helmet that used to protect his head. He is working with physical therapists, occupational therapists and rehabilitation specialists to learn how to use the right side of his brain to its full potential. Although Lam hopes Umair will remain seizure-free and that he can be independent in his daily life, she does not anticipate that he will develop fine motor skills in his right hand—something he never had because of damage from his stroke at birth.

But that doesn’t seem to slow him down. At a follow-up appointment after the surgery, Umair excitedly told Lam a new joke he learned from friends at school, then proceeded to give her an enthusiastic high-five with his right hand.

“When one side of your brain is disconnected, sometimes you have to relearn whatever that part of the brain was doing—you have to retrain the good side of your brain to take over,” Lam said, adding that if one side of her own adult brain was removed, for example, the opposite side of her body would be paralyzed. “Umair was a case in which the affected side was damaged as a baby, and over the years, the seizures had already taken over, so functions from the affected, diseased, seizing side had already started to shift over to the healthy side—that’s why he was able to walk and move his right arm and right leg after we disconnected the whole left side of his brain.”

For this reason, Lam said, the younger the patient, the better the candidate for this type of surgery.

“Because of brain plasticity, younger patients are able to really retrain or relearn skills—a younger patient has more potential and plasticity than an older patient,” Lam said. “We have to be very careful when we pick who to do this surgery on—that we plan to do no harm, and that we also plan for expected benefits in cognition and neurodevelopment, as well.”

Since Umair’s groundbreaking surgery, Lam has performed endoscopic hemispherotomies on eight other pediatric patients. She has observed that not only has the minimally invasive technique cut down on recovery time, but, thus far, it seems very rare for patients to require a blood transfusion or a shunt—both of which are common with the typical “open” procedure.

“Some of the children in need of this surgery are much smaller than Umair, and just cutting through the skin and cutting through the bone and really exposing all the areas of the brain that need to be visualized can result in enough blood loss to require a blood transfusion,” Lam said. “We developed this more minimally invasive technique so that it would be easier for the patients to tolerate and so that they could go on with therapies and rehabilitation faster.”

Lam said that since the first surgery in November, her team has presented their initial findings in different forums around the world. They also submitted a write-up detailing the surgery for publication and have been invited to present the technique at the upcoming Congress of Neurological Surgeons and at the annual meeting of the International Society for Pediatric Neurosurgery. Colleagues from hospitals across the country are eager for opportunities to observe the surgery and learn the technique for their own patients.

“It’s definitely something that has a learning curve. We are very conscious about the big responsibility in how we develop and disseminate this new technique, because it’s a quite complex procedure,” Lam said. “The families and kids don’t realize that they’ve actually just had one of the biggest surgeries that we do in pediatric neurosurgery.”