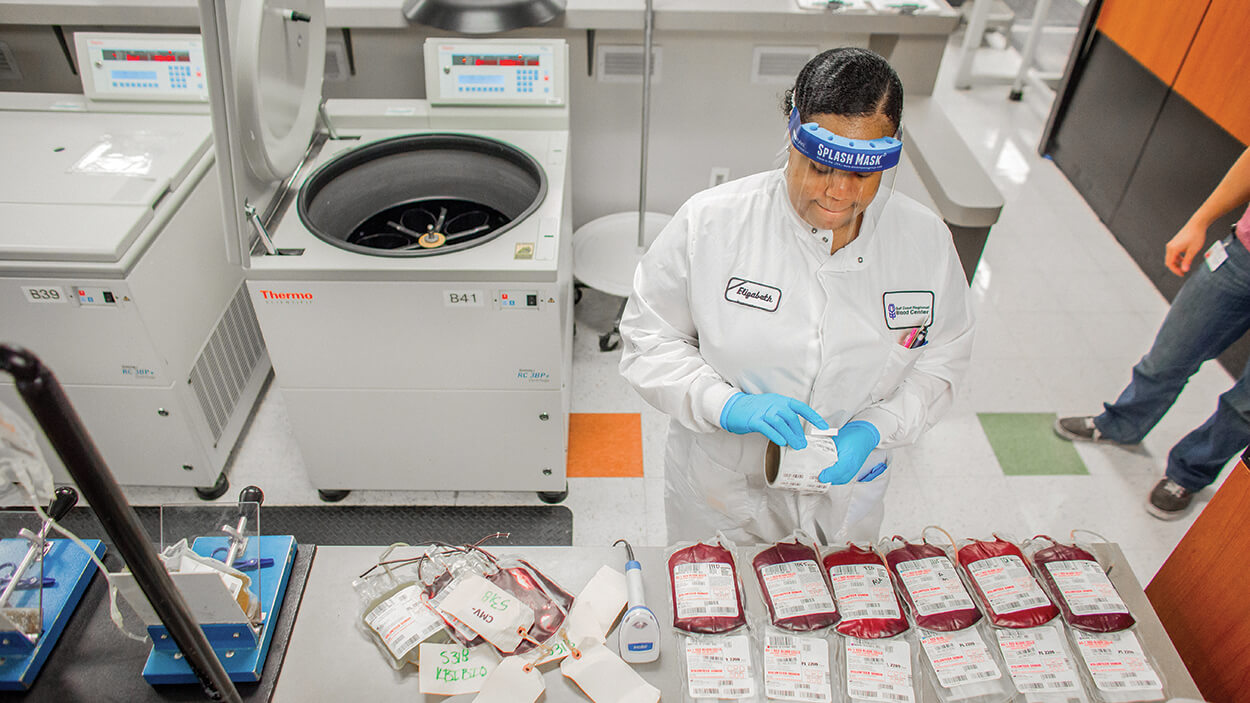 The well-orchestrated blood business, which functions with a sense of urgency even under ideal conditions, came to an unexpected halt last year when Hurricane Harvey flooded the Houston region. Gulf Coast Regional Blood Center was unable to operate for four days, highlighting an often-overlooked aspect of hurricane preparedness: Adequate reserves in blood banks.

“It’s important for blood to be on the shelf in a situation like this,” said Joshua Buckley, the blood center’s director of marketing. “It has provided us an opportunity to educate people on why it’s important to donate all the time and not just during times of tragedy or crisis.”

The closure meant that the blood bank’s recovery not only required quickly restarting collections upon reopening, but catching up on thousands of missed donations. On average, Gulf Coast Regional Blood Center must bring in 800 donations daily to meet the needs of the community.

“We were closed for four days and that’s about 3,200 donations we missed out on,” Buckley said. “We had enough blood on the shelves to make it through the storm, but we were pretty critically low on supplies. Once we opened four days later, we needed a boost from donors and that’s what we got. We were able to make up that amount in the first two days we reopened.”

The challenge of maintaining blood bank reserves during hurricane season, which began June 1 and extends through Nov. 30, is complicated by a summer slump in blood drives and donations.

“About 40 percent of our mobile collections come from high schools and colleges. During the summer, high schools and colleges are out, so we don’t have blood drives with them,” Buckley said. “Notoriously, in the blood banking business, that’s a tough time of year to collect blood, so we have to figure out some promotions to get people to come out and donate during those slower times.”

Whole blood has three components: Red blood cells, platelets and plasma. All three parts can be separated from a whole blood donation or donors can give one component.

O+ is the most common blood type. O- is universal, which means that this type can be given to everyone, but people with this type can only receive O- blood.

Buckley offers a practical answer when asked what type is in the highest demand: “We need the most of the blood that’s not on the shelf.”

Hurricane Harvey highlighted the impact of natural disas- ters and other emergencies on blood banks nationwide. Washington, D.C.-based America’s Blood Centers—the largest network of community-based, independent blood programs in the United States and Canada—spoke out publicly after the hurricane. The organization’s vast network of members, including Gulf Coast Regional Blood Center, provides more than half of the U.S. blood supply.

“It’s the blood on the shelf that saves lives. We need the blood to be donated before events occur,” said Ruth Sylvester, who directs regulatory services for America’s Blood Centers and is the liaison to a national interorganizational task force on domestic disasters and terrorism. “Hurricanes interfere with collection. When hurricanes are coming, people are busy: They’re boarding up their houses and evacuating. They’re not thinking about the fact that we still need blood products, but people are still bleeding, people still need chemotherapy and they still need their platelets regardless of a hurricane—and platelets only last five days.”

Harvey’s flooding posed a unique dilemma for those attempting to supplement the dwindling blood supply in Houston during and after the storm.

“We could get it there—we had plenty waiting in Dallas and in Shreveport—but the problem was actually getting it where it needed to go because you needed a high-water vehicle,” Sylvester said. “And then, once it got there, getting it that last couple of miles right there to the hospitals in Houston was the biggest challenge.”

In a late August 2017 news release, America’s Blood Centers stated that Harvey “and its associated flooding” were impacting the nation’s blood supply and urged eligible donors—current and first-time—“to make and keep donation appointments as soon as possible.”

That’s because blood drives had been canceled across Southeast Texas, placing more demand on blood collection agencies nationwide to “ensure a sufficient blood supply in storm-affected areas” to meet the needs of patients.

“People turn out in droves after an event happens. The media shows all these long lines, but that’s too late. The people that needed the blood? They needed it there. If the blood is there on the shelf, we can get it where it needs to go,” Sylvester explained. “We have this huge dry spell during the summer. The same thing happens at the holidays because everybody’s busy. And in January, they’re all sick, so that’s the other low point in the blood supply.”

In a March 2018 statement to the U.S. House of Representatives’ Homeland Security Committee for a hearing on the lessons learned from 2017 disasters, the organization noted that the U.S. Department of Health and Human Services and the Federal Emergency Management Agency now have recognized that blood centers are essential to emergency preparedness and should be prioritized.

Almost miraculously, an unexpected overflow of donations came in late June from among the 30,000 Lutheran youth convening at Houston’s NRG Park, across the fence from the blood center’s main office. In one day, the Evangelical Lutheran Church in America’s triennial Youth Gathering provided 300 donations. Usually, 100 donations would represent nine or 10 collection sites.

“The need is constant for blood. It’s not just during tragedies or disasters. People need blood every day for surgeries and cancer treatments, burn victims, even pregnancies,” Buckley said. “That’s why we ask people to commit for life and donate as often as they can.” 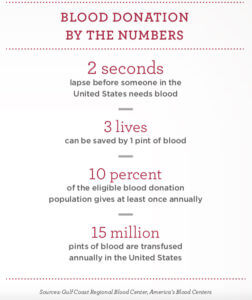