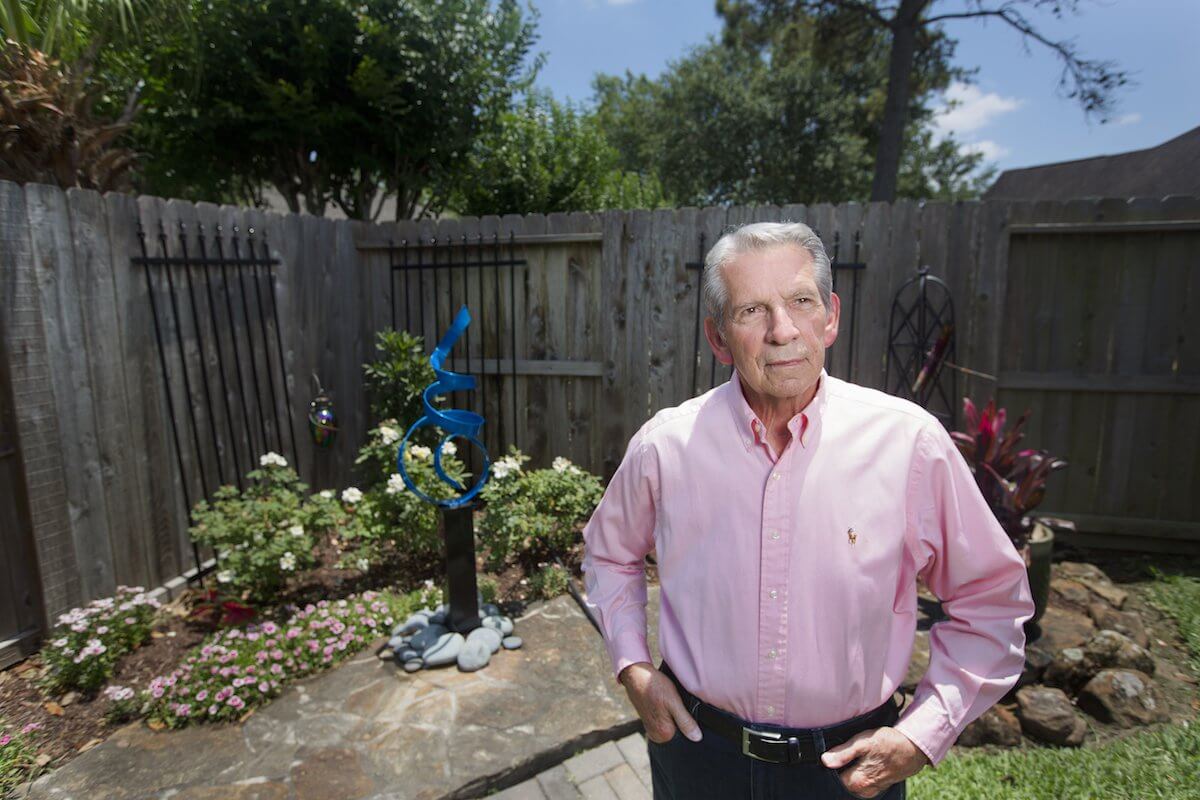 After Ron Lauve’s mother and niece battled breast cancer in the 1970s, the Pearland resident had at least three doctors urge him to “keep an eye out” for the disease because of his family history. He took that advice and, from time to time, performed a breast self-examination.

“Of course, you hear so much about female breast cancer—rightfully so—that I really didn’t think about it too much. Every now and then, I’d think about it and say, ‘Well, let me just check,’” Lauve, now 79, said.

His vigilance paid off. In June 2012, shortly before his 73rd birthday, Lauve discovered an abnormal, painless lump under his right breast, just behind the nipple. It was a telltale sign of an issue, but he decided to wait to see a doctor. Two weeks later, while working in the garden with his wife, he suddenly felt a sharp pain where the lump was located.

“I didn’t have any problems, but then all of a sudden one day I had a big problem,” Lauve said.

Lauve went to see Richard Ehlers, M.D., a breast surgical oncologist at The University of Texas MD Anderson Cancer Center, to investigate the growth and run a few tests. Lauve’s mammogram confirmed what he suspected: He had stage 2 breast cancer. On July 3, 2012, Lauve underwent a mastectomy to remove the lump from his right breast.

“I was determined from the outset that this was not my time to go,” Lauve said. “I had enough confidence that I could live with it. I mean, I could overcome it, not necessarily cure. … That’s what you hope. But I knew I had enough fortitude to hit this thing head-on.”

He underwent six months of chemotherapy and experienced all the symptoms associated with treatment, including losing his hair and dealing with neuropathy on the right side of his body. After his surgery and chemotherapy, he began a five-year adjuvant treatment plan with tamoxifen, starting in January 2013. Tamoxifen, an antiestrogen drug widely used in women with estrogen receptor-positive breast cancer to decrease the risk of recurrence, has been shown to be effective in men, as well.

“I told my wife, ‘You know, after the breast cancer surgery and the hot flashes [from tamoxifen], I’m beginning to think I’m moving more toward being a woman than I am a man,’” Lauve quipped.

But through it all, he didn’t let his diagnosis make him feel any less of a man. “With a woman, breast cancer is really an attack and a siege upon her womanhood. That is a tremendous thing to have to deal with,” Lauve said. “I was still the guy that I had always been, knowing full well I may be a different person at the outcome and later years, but it was not an attack on my manhood. I didn’t view it that way at all.”

“A lot of the [male] patients aren’t even aware that they could get breast cancer, or they don’t think of themselves as having breasts,” said Sharon Giordano, M.D., a breast medical oncologist at MD Anderson. “That often can lead to delays in diagnosis and treatment, because they’re not aware that it’s even a possibility.” 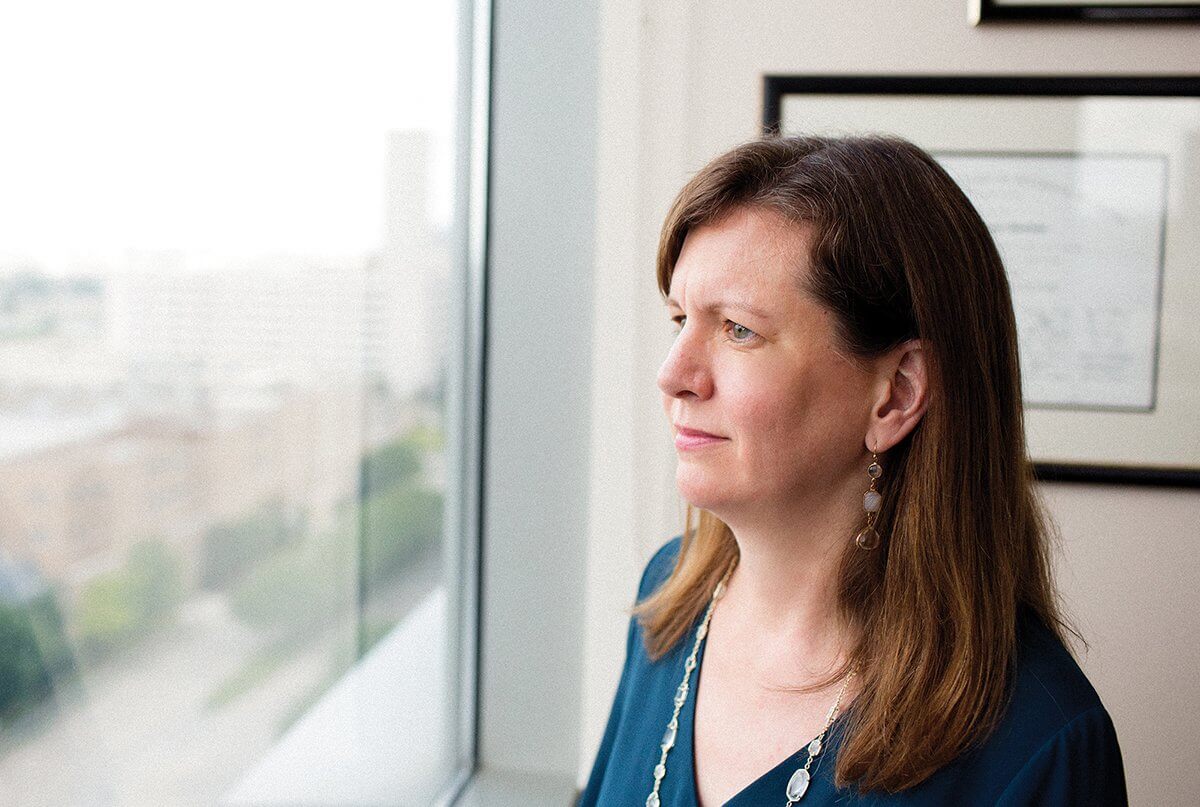 Sharon Giordano, M.D., is chair of the department of Health Services Research in the division of Cancer Prevention and Population Sciences at MD Anderson.

Giordano, who also serves as the chair of the department of Health Services Research in the division of Cancer Prevention and Population Sciences at MD Anderson, has been studying male breast cancer for 20 years. Currently, one-third of her patients are men. The precise cause of breast cancer is not well understood. However, researchers have identified genetics (including BRCA1 and BRCA2 mutations), age, family history and radiation exposure as risk factors for breast cancer in men. Higher levels of estrogen can also play a role in tumor growth. According to Giordano and multiple studies, more than 90 percent of male breast cancers are estrogen receptor-positive.

“Most of them have estrogen receptorpositive tumors, which, again, is surprising to a lot of [men], but men have estrogen, and most of these tumors are driven by hormones,” Giordano said.

Because male breast cancer is considered an “orphan” disease due to its rarity, there’s a paucity of research dedicated to it. Most treatments for male breast cancer are derived from what is already known about breast cancer treatment for women, but illuminating gender-based similarities and differences will lead to better, more effective therapies.

In partnership with the European Organisation for Research and Treatment of Cancer, Giordano and other researchers are part of an international effort to create a consortium of investigators from institutions around the world to study the biology and potential treatment options for male breast cancer.

“In the past, most of the research [involved] one institution writing up their experience of 15 patients. There weren’t big enough numbers to make meaningful conclusions,” Giordano said. “Through this, we first were able to get tissue specimens for all the men who had come through these institutions in the past 20 years.”

Giordano and the consortium hoped to enroll at least 100 patients for the research initiative, but within a year and a half of launching the study, they received 250 patients and about 1,500 tissue specimens for male breast cancer cases, allowing them an ample sample size to study.

“To us, this meant that it might actually be possible to do treatment studies in male breast cancer,” she said. “It is exciting.”

“There’s a lot of interest in [male breast cancer], and I think there’s a collective will to get things done,” Giordano said. “We’re hopeful that, working all together, we’ll be able to move the field forward and really make some advances for men with breast cancer.”

Live your life
As Lauve was completing his five-year regimen of tamoxifen, personal tragedy struck. In November 2014, he was diagnosed with cancer again—this time, with thyroid cancer—and on June 25, 2017, his second wife passed away from ovarian cancer. Yet he maintained his optimism.

“You’ve still got to live your life and go on with it. After two cancers and losing two wives, I don’t have any other approach to life other than take it every day, be happy, be positive and do for people what you can do for them,” Lauve said. “Thank the Lord you’re still here and eat healthy when you can. Pig out when you want to every now and then.” Today, Lauve is off the tamoxifen and enjoying life as a cancer survivor.

He said he “wears pink a whole lot more than I ever did before” to show his ongoing support for breast cancer research and his fellow breast patients, both men and women. He even participates in MD Anderson’s annual breast cancer fashion show and wears his usual outfit: a tuxedo decked out with a pink vest, a pink tie, a pink ribbon and his black and white shoes.

“I’m out there to tell the world to see me,” Lauve said. “They need to see the pink on a man.”