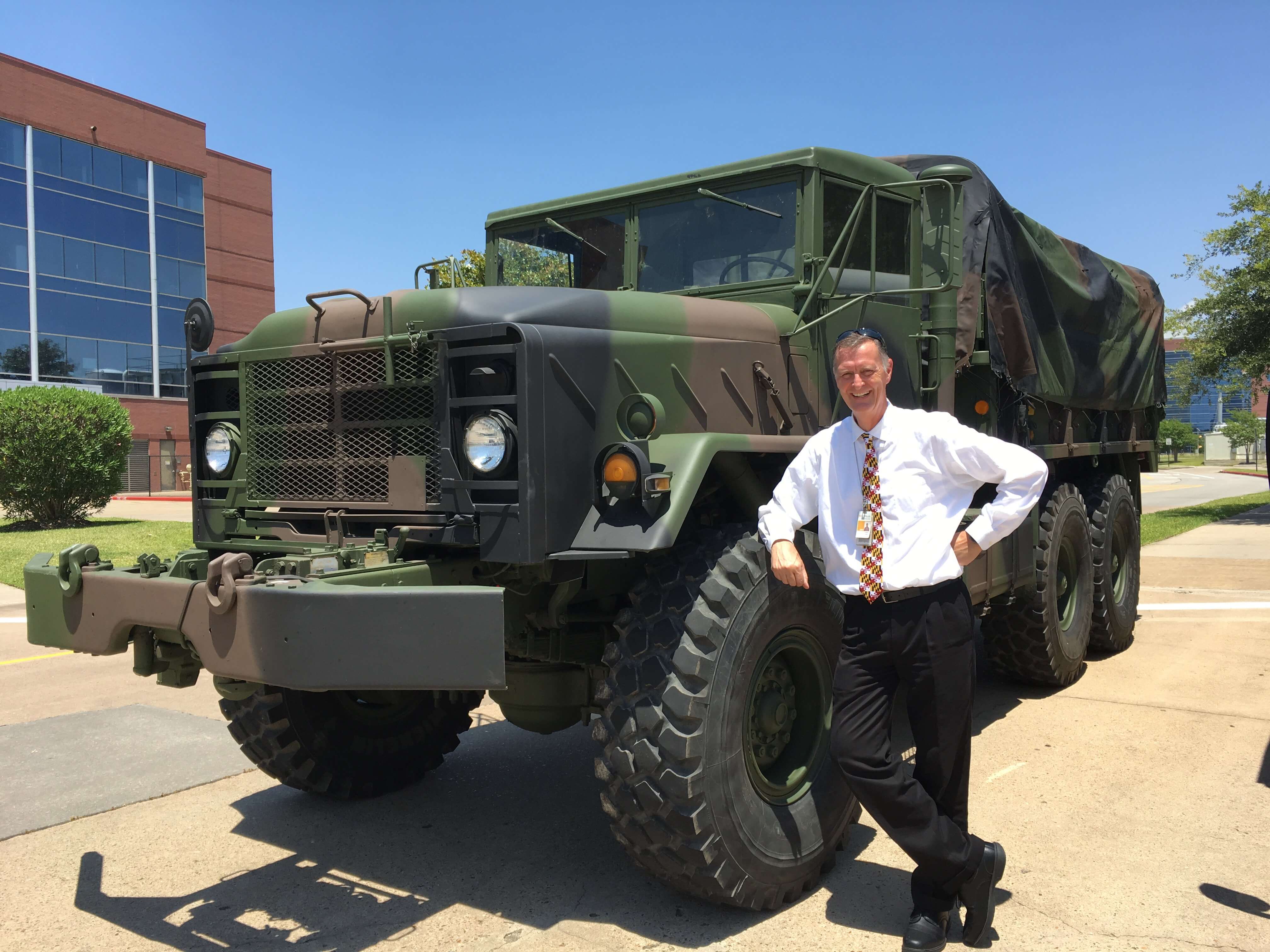 Laverne, the name of the military surplus high-water vehicle that The University of Texas Health Science Center at Houston (UTHealth) added to its fleet in response to Hurricane Harvey, arrived two weeks ago.

Shirley, a sister transport, is on the way.

The play on the TV sitcom Laverne & Shirley is one of the more novel outcomes of challenges faced by Texas Medical Center institutions during last August’s unprecedented storm.

The TMC, the world’s largest medical city, had minimal flooding and fared better than many other Houston institutions.

Tropical Storm Allison devastated the Texas Medical Center in 2001 by dropping more than 40 inches of rain in 15 days.

Harvey, which delivered 51 inches of rain over five days and set a record for the largest amount of rainfall from a single storm anywhere in the continental United States, tested more than a decade of meticulous post-Allison planning and improvements in the TMC.

“We clearly understood it could no longer be below ground,” said Tom Flanagan, Memorial Hermann system’s vice president of trauma services and disaster preparedness.

“The difference was that we had no intrusion of water on this campus [during Harvey]. We had no loss of power. We were fully operational, including the Life Flight program,” Flanagan said. “We were able to shelter our staff and patients in house while we continued to receive patients … totally a 180-degree difference from what happened in Tropical Storm Allison.”

During the UTHealth flood drill a month ago, in advance of the June 1 start of hurricane season, 23 flood doors were tested by inflating their seals and checking for needed adjustments.

“We have critical folks who would love to be able to get in to take care of patients, but they can’t get there and the resources for the city of Houston are so tapped that the decision was made that we would procure an elevated large vehicle–a five-ton military surplus truck–so that if there are key individuals that need to get in and out, docs and nurses, it could be done safely.”

So-called “ride-out teams” are typically prepared to stay at work for two or three days.

“The flooding was so extensive from Harvey that some of these folks stayed here for six days and that’s very problematic in getting that next wave of replacements in,” Emery said. “Some of these things are 24/7. Obviously, you’ve got health care, but we’ve also got organ transplants, we’ve got animals that have to be fed and research projects that are time dependent, so one of the things we really re-examined was the length of time that the ride-out teams might be expected to be here–and I think that’s a lesson learned by some others around the Texas Medical Center as well.”

“We have a very mature implementation of the incident command system,” he said, adding that the communication system with employees proved particularly vital.

“We’ve got over 16,000 staffing positions in our system and through Harvey, during that five days, we sent out about 320,000 contacts–whether it was communicating with everybody or whether it was sending tailored messages to very specific audiences with information they needed to take action,” he said. “One of the things that helps us to be effective is that we have a very strong and resilient employee culture. Everybody is essential to our response.”

Houston Methodist Hospital remained operational in the TMC and across its system, spokeswoman Gale Smith said.

“Harvey was a very unique weather event,” she said. “Allison was how we got our lessons learned. We moved our generators. We installed the flood doors so that for every weather event we’ve had since then, we haven’t had a major setback.”