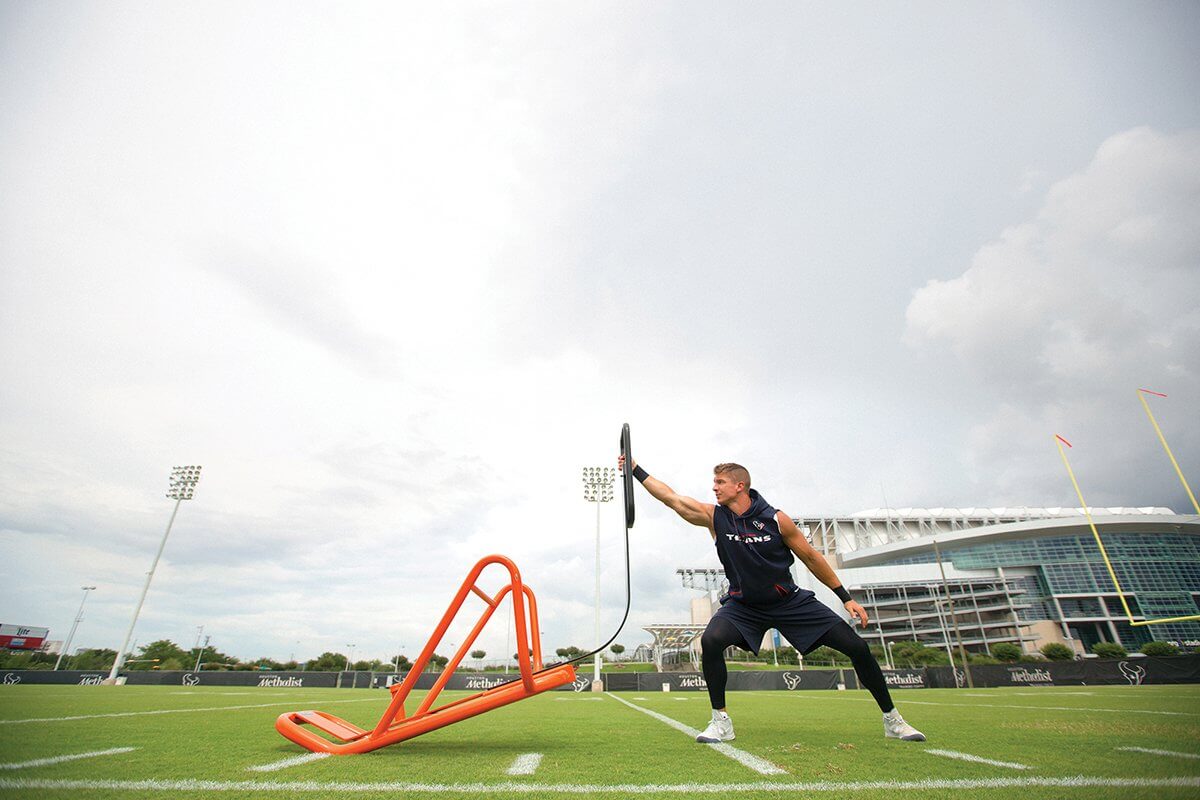 Brian Peters joined the Texans in 2015. The 6-foot-4-inch linebacker, #52, played football at Northwestern University and took a circuitous route to Houston. He played for the Arena Football League, the United Football League and the Canadian Football League before reaching his ultimate goal: the National Football League. Peters, 29, spoke with Pulse about diet, mental discipline and giving back.

Q | What do you eat over the course of a day when you’re training?
A | I’m 237 pounds, pretty close to my maintenance weight, give or take two pounds. My diet is pretty simple; I’m routine-based. I wake up, turn the oven on, and bake eight or nine pieces of bacon—uncured, so no nitrates or nitrites. I eat that, drink a cup of coffee and head in. Post workout is the only time I’ll intake carbohydrates, so it’s protein, vegetables, a little bit of fruit or a smoothie, and that’s it. I eat a lot of red meat. I eat pork and salmon and cod. If it’s a lower-fat fish, I’ll cake a lot of ghee on it, which is a fattier butter.

Q | Is there a name for this diet?
A | It’s kind of a few different diets—a ketogenic diet and a paleo diet kind of merged into one. To get into ketosis [a metabolic state in which the body does not have enough glucose for energy and begins to burn stored fats instead], you have to eliminate carbohydrates so your body starts to use the fat as energy. So I usually don’t eat after 8 p.m. in order to slip into that in the morning. When I go full ketogenic, I don’t do any carbohydrates. I have to increase my fat intake, add a few extra shots of extra virgin olive oil, whatever I can do to make up that fat deficit. On keto, I’m very high energy, but it’s hard for me to maintain weight.

Q | Is there a certain calorie intake you’re shooting for each day?
A | When I switched from safety to linebacker when I was transitioning from college through Canada and all those other leagues to get here, I counted calories. For me to gain weight, it’s 5,500 calories and up, usually. There was a time when I had to get from 215 to 230-plus pounds in a span of six to eight weeks, so I was eating 7,200 calories a day. It was a chore, but it got me to where I wanted to be. Right now I probably sit between 3,800 and 4,400 calories a day.

Q | What’s your cheat food?
A | My big cheat food in Houston is Tiny’s Milk & Cookies. I’m a sucker for cookies. I’m not a candy guy, really. If I am, I go dark chocolate-covered almonds or something like that. 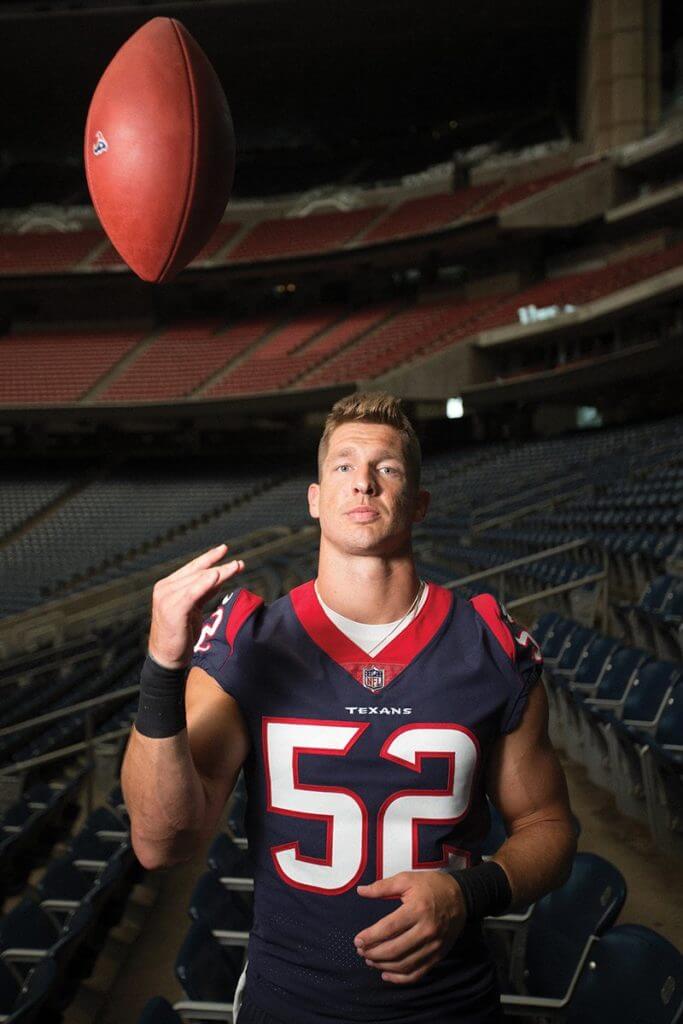 Q | Can you talk about the breathing exercises you do to help with mental focus? Is this something all the Texans are doing?
A | Not really. It’s something I took up off-season more than anything. I’ve experienced it a little bit before with yoga and meditation. I used to work one-on-one with a yoga teacher who took me through guided meditation, and from there, I got intrigued and curious about it. I am part of a group up in Minneapolis called the MindStrong Project, where we develop optimal performance for kids and other individuals. The president is one of my friends from high school, Harvey Martin. He teaches professional pitchers. One of the main aspects of his coaching is basically tying your breath to your mental performance. The breath controls the body. You learn to do a lot of breath holds with oxygen in your lungs and without oxygen in your lungs. You start to learn that your body can work with-out actual oxygen in your lungs. The more you control your breath in a stressful state the more you can stay aware and perform optimally.

Q | What kind of results are you seeing?
A | I’ve seen some big jumps with it pretty quickly. I can hold my breath underwater for over three minutes now. My record is three minutes and nine seconds. Now, if anybody is reading this, don’t try to do this alone. There’s also performance breathing where you take longer inhales, shorter exhales, and you over-oxygenate your body. What you learn quickly with the breathing coaching is that it’s the body and the tissue that need oxygen, not your lungs. So when you hear guys huffing and puffing, you know they’re not as efficient as they could be. Now, even when I’m out running and conditioning against my own teammates who are definitely in better running shape than me, I control my breath better than them. I do the same thing in the cold tub. I go up to my neck in the cold tub and do two different types of training. I jump in, go all the way under and then I come up and do 10 breaths, in through my nose. I try to drag those breaths out as long as I can. My 10 breaths take anywhere from a minute, 15 seconds to a minute and 40 seconds. Then you submerge and get out. It’s a wake-up refresher. Then, for muscle recovery, I’ll go up to my neck in the full tub for 15 minutes, three to four days a week.

Q | It sounds like you spend a lot of time on muscle recovery.
A | A lot of the most successful guys in our locker room take care of their bodies like professionals. It’s kind of a pattern I’ve seen. The guys that are the most successful spend the most time on the right things. In the NFL, durability is more import-ant than ability, sometimes. A lot of guys get opportunities because other guys break down.

Q | You chose Northwestern for the athletics and the academics, and you left there with two degrees, right?
A | Yes. I have my masters in sports marketing and PR. My undergraduate degree is a mouth-ful: Learning and Organizational Change and Integrated Marketing Communications.

Q | And that really means …?
A | Business consulting and marketing, basically. We didn’t have a marketing major so we had to build from multiple schools to get this IMC certificate.

Q | How old were you when you left Northwestern?
A | I red-shirted [when an athlete sits out of competition for a year and then gets another year to complete four seasons], so I got out of there at 23. And then the whole saga started.

Q | Let’s talk about that saga.
A | So when I got out of school, I got no calls on draft day. My college coaches networked me in for mini camp tryouts. I went to the Tampa Bay Buccaneers for two days and then the Chicago Bears for two days. Had good practices, didn’t get signed. It was summertime, so I was working odd jobs in Chicago …

Q | How odd?
A | Anywhere from babysitting to personal training to demolition. Then I got an opportunity to try out for the Iowa Barnstormers out in Des Moines. They were part of the Arena Football League then. I made that team for the last three or four weeks of their season, playing for $300-a-week kind of deal.

Q | Was it fun?
A | It was a blast. Good people. If I’m getting to play football, I’m a happy man. So I then came back, and still no phone calls from the NFL. My agent got me a tryout with a UFL team, the Omaha Nighthawks. The league actually doesn’t exist anymore—they went under. So I went out there, made the team and then they cut me after training camp. When I got released from there, I thought football was over. I went back to Chicago, worked the same odd jobs.

Q | How did you end up playing football in Canada?
A | My agent kind of dropped me. He didn’t want me to go to Canada because you have to go for a two-year commitment. So I ended up emailing all the CFL guys. I had a highlight tape from Northwestern. One team responded about 10 days later—the Saskatchewan Roughriders. They brought me up for practice squad. After that, I signed a contract for the following two years, 2013 to 2014. We won the Grey Cup in 2013.

Q | You signed with the Texans in 2015?
A | I got signed by the Vikings that February. I worked out with them all off-season and then they cut me and put me on practice squad for the first three weeks of season. And then the Texans signed me, so I’ve been here ever since.

Q | It’s been a long and winding road. How do you feel now that you’ve been in the NFL for a few years?
A | I’ve played through all the leagues and I’m very grateful for the opportunity. But also, I’m trying to grow and add as much value to the team as I can. It’s how I’m wired. I want to contribute. I try to bring the young kids along because I think we’ve got an absolutely savage football team right now. We’ve got all the pieces and parts; we’ve got great chemistry.

Q | Are you one of the older players on the team?
A | I’m in the upper echelon—29 is definitely old in football years. It’s like dog years. It goes quick.

Q | Do you think your history and maturity make you a better player?
A | Probably the best thing for me was when I came out and did the two mini camps, initially, with the Bucs and the Bears. I got a taste of it. I was like, ‘I know I can play.’ As much as working those odd jobs sucked, it got me some sense of grit. I’d work all day, take my workout at 9 p.m. at this bum boxing club, and then I’d come home at midnight, eat and go to sleep. I had good friends who let me stay at their place for cheap.

Q | The Texans have a relationship with Texas Children’s Hospital. Have you spent time there visiting patients?
A | I’ve organized a few visits, and our community director has sent me over a few times, too. I started visiting kids at the hospital when I was at Northwestern. Just the simple thing of giving a football or signing an autograph—it’s huge. In 2009, when I was playing at Northwestern, I met this one kid, Jack Marshall. He went to sleep one night, woke up and told his parents his legs were burning. He got diagnosed with transverse myelitis [a rare neurological condition causing inflammation of the spinal cord and, in extreme cases, paralysis]. He was in a wheelchair when I first met him. We played video games—Madden. The next time I saw him, he was walking. He walks with a limp, had a lot of bullying issues and stuff. Eventually, I met his family. Then my family came with me to meet him. My mom and his mom hit it off. Stuff like that just reinforces reasons why you keep going. Motivating him helped motivate me. You see a kid who has all the odds stacked against him, who can’t use his left leg properly, but he still couldn’t have a more positive attitude as he approaches life.

Q | You’ve played football in seriously cold weather in Illinois, Saskatchewan and Minnesota. And now you’re in Houston, Texas. Would you rather play in the cold or the heat?
A | I played two games in –26 degrees in Saskatchewan. A practice outside one day was –41. So, I’m liking the comfort zone—anywhere between 32 and 70 degrees.

Brian Peters was interviewed by Pulse editor Maggie Galehouse. The conversation was edited for clarity and length.