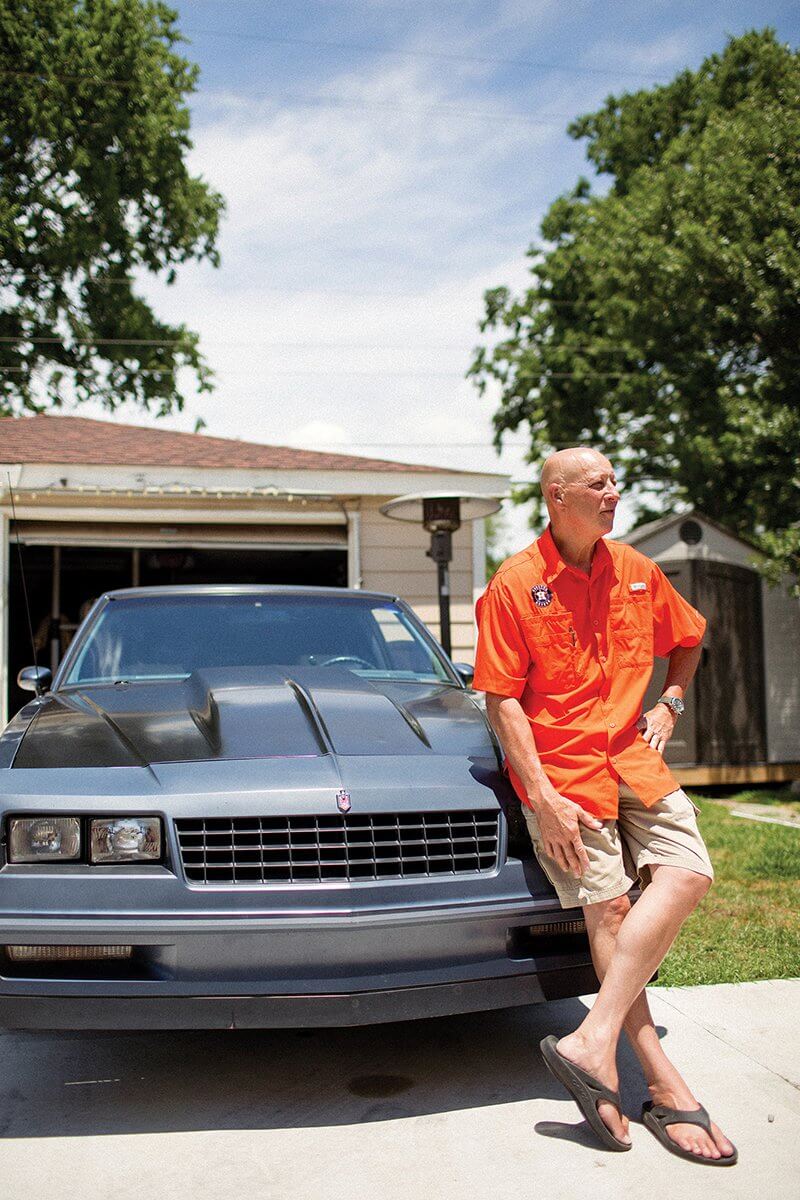 A few months ago, when he finally had the muscle car delivered to his southwest Houston home, Fisher was amped for his latest rebuilding project.

“I took the gas tank out, cleaned it, put new gas in it, topped off all the fluids and put a battery in it,” Fisher said. “I stuck my arm in the door to crank it—one hand with the ether and took a little shot at the carburetor—and it fired up. I couldn’t believe it.”

The high-performance car wasn’t the only thing he’s been reactivating.

Fisher was diagnosed with bladder cancer in August 2016 by Run Wang, M.D., the Cecil M. Crigler, M.D. Chair in Urology at The University of Texas Health Science Center at Houston. His his bladder was removed in February 2017 by Neema Navai, M.D., an assistant professor of urology and a bladder cancer surgery specialist at The University of Texas MD Anderson Cancer Center.

Fisher’s recovery over the last year has included the challenge of recouping intimacy with his wife.

“When they gutted me, I lost some specific ability,” he said. “I’m 56. I’m not that old. My wife is a little younger than me, so we had a certain part of our lifestyle that was missing. So, we tried various methods to regain that. Pills. There’s an injection. Neither gave the kind of fulfillment that, you know—it just didn’t work.”

Giving up wasn’t an option for the couple.

“For us, that’s a huge part of our relationship,” Erin Fisher explained. “I said: ‘We’ll do whatever we have to do to get us back where we were before.’”

The couple opted for a penile implant and Wang performed the surgery in September 2017.

Robert experienced pain through the healing process and during initial attempts to reignite a physical relationship with his wife.

“It takes a while—I would say a few months before you start cooking. It’s like using new equipment in your kitchen. At first, it’s kind of scary,” said Erin, a traveling PET scan technician for Memorial Hermann. “I think it’s really important to talk to your partner about what works and what doesn’t work.”

She also encouraged couples to remain steadfast early on.

“Don’t give up,” she said. “There were times, we were like: ‘Is this really it for us?’ But we kept going with it and it worked out—and it’s off the charts.”

Although many survivors of gynecological or urological cancers face the challenge of physical intimacy with resignation and silence, there is hope.

The consequences of altered sexual function after cancer treatment can be devastating to relationships and mental health, said Wang, who is a professor of urology at MD Anderson and also practices at Memorial Hermann- Texas Medical Center.

“We have patients that lost their erectile function after prostate cancer or bladder cancer or rectal cancer treatment, then lost their partner as well because they could not engage in sexual activity. They also get depressed,” he said. “Not only do we help the patient’s ability to engage in sexual activity, but we re-establish their manhood and re-establish their confidence.”

Wang is a reconstructive surgery specialist whose mostly performs penile and urethra reconstruction to restore function. He is part of an elite group of physicians worldwide who perform at least 100 penile implant surgeries annually. In May, he ended a two-year run as president of the Sexual Medicine Society of North America.

A penile implant is a prosthesis surgically placed inside the penis to allow a man with erectile dysfunction to achieve an erection. The device is typically recommended when other treatments—such as pills, injections and vacuum pumps—are ineffective. There are two main types of implants: Inflatable, the most common, can be adjusted for firmness; semi-rigid implants always maintain some degree of firmness.

According to Wang, a penile prosthesis provides the most effective and reliable results for patients with erectile dysfunction, in comparison to injections or to medications, such as Viagra and Cialis. Recent research from the journal Andrology and other sources also reveals that the prosthesis provides more satisfaction for patients and partners.

Wang emphasized that a large part of a patient’s success with an implant is the partner’s presence, involvement and support—which is demonstrated by the Fishers’ use of “we” and “our” while discussing their experience.

Wang believes the issue demands transparency and engagement by patients, physicians and partners to achieve the most positive outcomes.

“I will start a conversation with the patient about the therapy and we will talk about the pros and the cons regarding sexual function, ejaculation, relationship, incontinence and libido,” he said.

Otis Brawley, M.D., chief medical and scientific officer for the Atlanta-based American Cancer Society and an expert in prostate cancer health outcomes, also encourages patients to initiate conversations with their oncologists before cancer surgery about the consequences of treatment and to invite their partners to those appointments.

“Some of these issues that we end up talking about are things that would make Stormy Daniels blush,” Brawley said. “Most men don’t realize that if you get a radical prostatectomy, the penis is probably never going to get as hard as it used to. You need to be involved and discuss your options with that health care provider. Most men should get a second opinion.”

If a physician doesn’t raise the issue early in the treatment process, patients should request access to a sexual medicine service or counseling, Brawley and Wang said.

One resource for patient information was created by Leslie R. Schover, Ph.D., a Houston clinical psychologist. She founded Will2Love, a web-based information and self-help portal designed to address sex and infertility issues related to cancer treatment. Users can access information privately and receive personal telehealth services with a professional counselor.

Will2Love was among the first startup companies selected for the inaugural TMCx accelerator class in 2015. The concept sprang from Schover’s career as a clinician and researcher. She is a former staff psychologist at the Cleveland Clinic Foundation and retired in 2016 as a professor of behavioral science from MD Anderson to work full time with her company.

Although Will2Love was conceived as a consumer-facing portal, Schover’s ambition for the company now includes licensing to hospitals.

“Often, people just didn’t get timely, accurate information,” Schover said. “We have a program for men and a program for women and each of them has information on all different types of cancers and treatments and what they do to sex and fertility.”

These days, Robert Fisher has converging comeback stories about rebuilding a full life, a beloved car and a water-logged residence.

A few years after graduating from Westbury High School in 1980, he landed his first dream job working as a mechanic with A.J. Foyt Racing, the organization run by the legendary auto racing driver of the same name.

Fisher received formal training as a maintenance mechanic from Rice Aviation in 1990, then began working in oil fields offshore and internationally. For the last four years, he has been a sales executive with ABCO Subsea.

Since the implant surgery, Fisher and his wife have had the added stress of renovating their Westbury-area home, which flooded last year during Hurricane Harvey.

The cancer survivor’s muscular arms hint at his continued heavy lifting on projects and other work with his hands.

Cancer developed in some pockets of his lungs, so he went back on chemotherapy a few months ago. Bald as the 8-ball on his pool table, Fisher strives to take his mind off the treatment and to keep his energy high. He made some upgrades to his pickup truck and continues to work part-time.

“So far, everything has worked well. I feel very blessed and I’m sure every day I get is a gift and I’m happy I have it,” Fisher said, explaining further why he was willing to speak publicly about his experience. “If I can’t pass on anything, I’ve wasted everything. If this can help others, I’m happy as can be.”

Having replaced the hood on his beloved Monte Carlo, which has traveled less than 60,000 miles, he now hopes to spend quality time with his wife and fellow classic car enthusiasts at shows and other gatherings across the country.

Robert and Erin Fisher celebrated five years of marriage in May.

“I had an opportunity to bring happiness back to her and that was the most important thing to me,” he said. “Honestly, it’s better than before.”