In Memoriam: A Cancer Patient, a Two-Toed Sloth and a Lifelong Wish

Terminally ill patient Caitlin Ambrose always wanted to hold a sloth. On Friday, she got her wish.

In Memoriam: A Cancer Patient, a Two-Toed Sloth and a Lifelong Wish 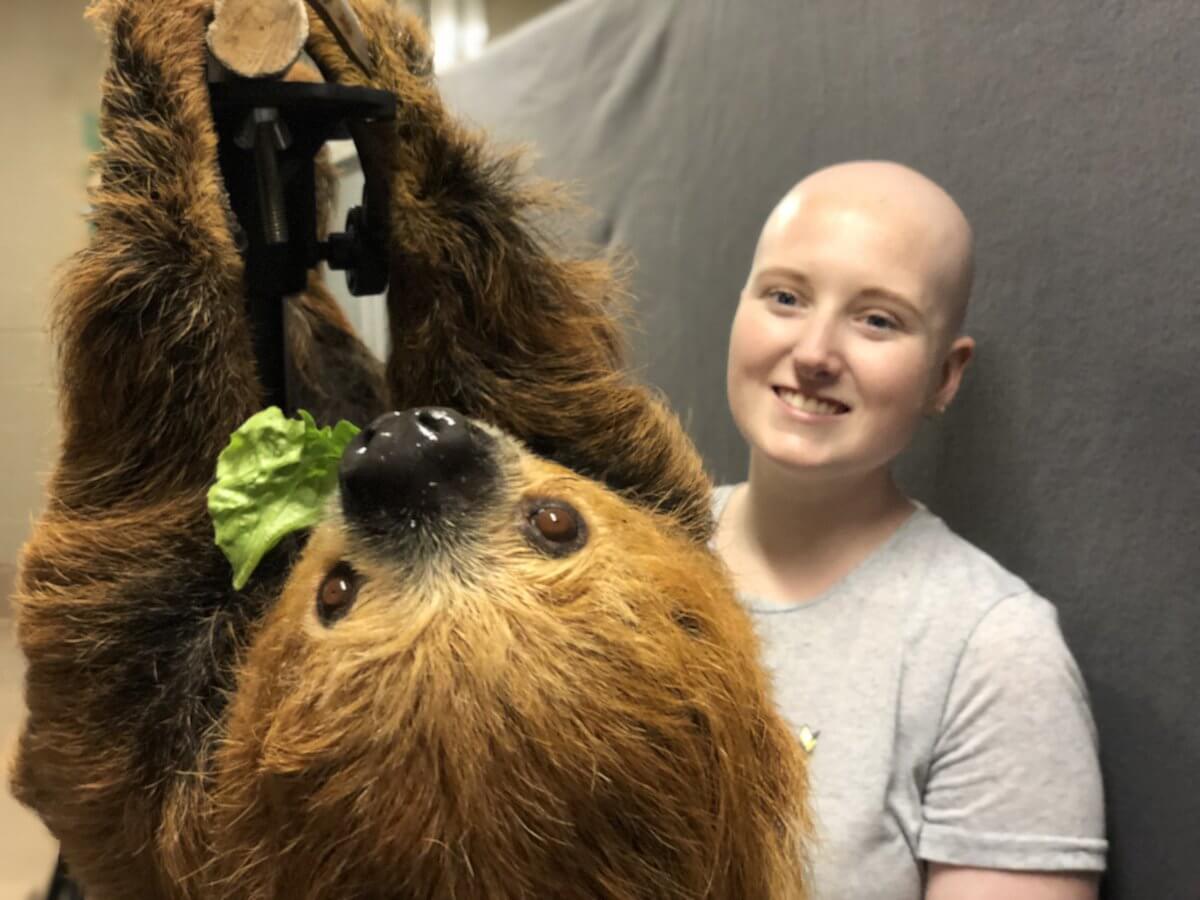 Caitlin Ambrose, the Australian woman who sought experimental treatment in Houston this year for Ewing’s sarcoma and fulfilled a lifelong wish to meet a sloth, has died. She was 21.

At the end of her 19-month-long cancer battle—which arrived at 11 p.m. Aug. 1—she was surrounded, per her wishes, by family and friends in her hometown of Cabarita Beach, Australia.

“Our whole family has been overwhelmed by the enormous amount of love, support and generosity shown by everyone and we can’t thank you enough. We don’t know how our life will ever be the same. Until we meet again our brave warrior,” wrote relatives wrote on her Instagram page.

In April, Ambrose and her family traveled to Houston to participate in The University of MD Anderson Cancer Center’s first-in-human clinical trial for Ewing’s sarcoma. Although her diagnosis was terminal, Ambrose saw the trial—which is testing the efficacy of drug TK216—as an opportunity to use what little time she had left to make a difference and contribute her information in hopes of one day helping future Ewing’s sarcoma patients.

At the end of her stay in Houston, Ronald McDonald House Houston and the Houston Zoo fulfilled her wish to meet a sloth. On June 8, Ambrose and her family were treated to an exclusive meet-and-greet with Curly, a 25-year-old Linnaeus’s two-toed sloth.

On Friday afternoon, the 21-year-old Ewing’s sarcoma patient from Australia finally got her wish, thanks to Ronald McDonald House Houston and the Houston Zoo. Caitlin, her parents and her two siblings visited the zoo, where they were treated to an exclusive meet-and-greet with Curly, a 25-year-old Linnaeus’s two-toed sloth.

“It doesn’t feel real. It feels like it’s a big prank,” Caitlin said, gleefully, when she learned about the surprise. “I just love sloths. I just relate to them so well. They just sit there eating. They’ve got big claws and they just chill out all day. Those are my goals in my life. I love them.”

Caitlin was diagnosed with Ewing’s sarcoma in March 2017 after experiencing pain in her left ribs.

Before her diagnosis, Caitlin was halfway through earning her double degree in nursing and midwifery at Deakin University in Victoria, Australia, with hopes of becoming a midwife in London. But after her doctors in Australia discovered an 8-centimeter tumor in the soft tissue of her left ribs, she abandoned her plans and embarked on a rigorous cancer treatment journey, undergoing 17 rounds of chemotherapy, surgery to remove 3.5 ribs and radiation therapy on her chest and hip. But despite their best efforts, the cancer returned in January 2018.

The five-year survival rate for patients with localized Ewing’s sarcoma is 70 percent; however, once the cancer has spread, the survival rate drops to 15 to 30 percent.

“At that stage, [doctors] told it was terminal and there was no other treatment except palliative care,” said Caitlin’s mother, Mellissa.

After doctors informed her that she had only a couple months left to live, Caitlin and her parents flew 8,333 miles in April 2018 from their home in Cabarita Beach, Australia, to Houston to participate in a first-in-human clinical trial for Ewing’s sarcoma at The University of Texas MD Anderson Cancer Center. The trial, which is testing the efficacy of drug TK216, was a Hail Mary, but Caitlin and her parents sought to use what little time they had left to make a difference.

“It was a combination of last hope, but we also wanted to provide something for people after us,” Mellissa said. “If it didn’t work for us, her information could help others.”

Unfortunately, Caitlin’s test results showed that the tumor had continued to grow. After spending 43 days in Houston, the family decided to return home, while Caitlin was still well enough to travel, for palliative care in lieu of further treatment.

“Caitlin’s wish when she got here was that she wants to die at home, not here,” her mother said.

But before Caitlin and her family boarded their flight to Australia on Saturday, she made a special trip to the Houston Zoo to see her favorite animal. She was experiencing excruciating pain on her left side—as if “boiling water was being poured on my left rib”—but smiled from ear to ear Friday afternoon as she hung out with Curly the sloth, caressing his brown fur and taking selfies with him while he ate.

“I’ve been in such a bad mood since getting the results, and I’ve really taken it out on the family,” Caitlin said. “It’s good to have something positive when you get so much negative news.”

Organized by Amy Armstrong, house manager at Ronald McDonald House Houston, the meeting with Curly gave the Ambrose family an opportunity to focus on something other than her terminal diagnosis.

“That’s what makes the community in the House and these moments so special,” Armstrong said. “They bring you into their story and their lives.”

Once Caitlin arrives back home in Australia, she plans to spend her remaining time surrounded by friends and family near the beach.

Leaving her family “is going to be s—,” she said. Her goal, now, is to make it to her 22nd birthday, but she has learned to take things day by day.

“If you want to do something, do it now,” Caitlin said.

“She’s such a kindhearted person. Even during this journey with cancer, she’s always cared about how other people are doing,” said Caitlin’s sister, Tia, as she pushed back tears. “She always makes you want to be a better version of yourself. If you’ve had the worst day and something really hasn’t gone well, she can come up to you, say a joke or stand there and hug you, and she can make you feel so much better. That’s what I’m going to miss the most.”