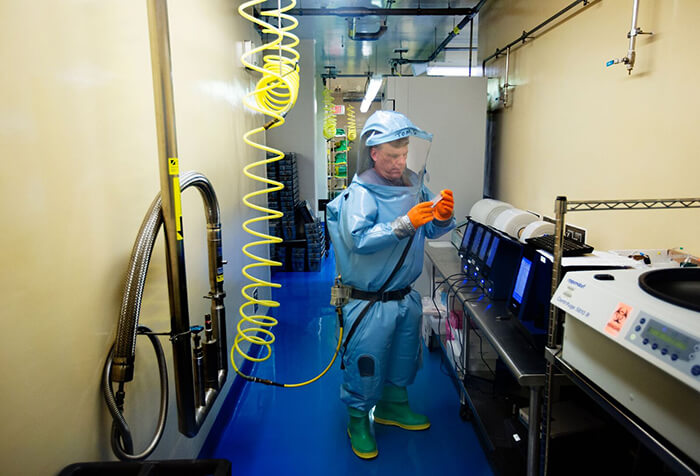 Editor’s note – Aug. 2, 2018:
Just days after the Democratic Republic of the Congo declared the end of the Ebola outbreak that began in May, health officials announced a new Ebola outbreak had begun 1,500 miles away, in a different part of the country.

After three decades of working with the deadly Ebola virus, Thomas Geisbert, Ph.D., a professor of microbiology and immunology at the University of Texas Medical Branch at Galveston (UTMB Health) is finally reaping the life-saving fruits of his professional labor.

In May, the World Health Organization (WHO) began distributing more than 7,500 doses of the experimental rVSV-ZEBOV— the Ebola vaccine Geisbert helped create—to contain an outbreak in the Democratic Republic of the Congo that has infected more than 60 people and killed at least 28.

WHO officials say the inoculations represent a “paradigm shift” in the way countries respond to the deadly virus, whose symptoms include a high fever and internal bleeding, because this is the first time a vaccine has been used to fight Ebola at its onset. “It’s clear that this is what we have all wished for for quite some time,” said Joseph McCormick, M.D., a former official with the U.S. Centers for Diseases Control and Prevention who is now an epidemiology professor and regional dean at UTHealth School of Public Health in Brownsville. “In terms of Ebola control, this is a big deal.”

For Geisbert, it’s the culmination of decades of Ebola research dating back to the 1980s when he started his career working at the U.S. Army Medical Research Institute of Infectious Diseases. Since Ebola was discovered in 1976—and until the major outbreak in western Africa in 2014 that killed thousands—the virus generally emerged every few years and killed dozens to hundreds of people in small African villages with each outbreak.

At the start of his career, the military wasn’t concerned about widespread Ebola illness, Geisbert said. There was greater worry that the then-Soviet Union would try to use Ebola and its cousin, the Marburg virus, as biological weapons.

While in the Army, Geisbert worked with Heinz Feldmann, M.D., Ph.D., then-chief of the special pathogens program at the Public Health Agency of Canada’s National Microbiology Laboratory, on what ultimately would become an Ebola vaccine. Both scientists were part of a multi national team of 14 researchers, including Geisbert’s wife, virologist Joan Geisbert, from the United States, Canada, Germany and France who published the seminal 2005 paper in Nature Medicine unveiling their Ebola vaccine that worked in non-human primates.

Traditionally, vaccines for conditions like the flu or meningitis work by prompting the body to generate disease-fighting antibodies. But when that same technique has been used with Ebola, the resulting antibodies have been ineffective at controlling the disease.

So researchers used a different technique. The rVSV-ZEBOV vaccine works by placing part of the Ebola virus within a benign virus that isn’t dangerous to humans. The Ebola vaccine essentially teaches the body’s T-cells, a key part of the immune system, to recognize and attack Ebola, preventing the virus from replicating. Basically, the body trains on a fake version of the virus so it’s better prepared when it encounters the real thing.

Though the vaccine was promising, not much happened for a decade. Administering the vaccine faced a major logistical challenge because it’s difficult to predict where the virus will strike. Meanwhile, testing the vaccine had been ethically fraught. And, there’s the reality of the economics: Ebola was a relatively rare disease that only emerged every few years and there wasn’t a lot of money to be made from vaccinations.

“So we had these vaccines in the 2000s, and we knew they worked great in monkeys, but they just sat there, honestly,” Geisbert said.

It’s a problem that’s not unique to Ebola, said Peter Hotez, M.D., Ph.D., dean for the National School of Tropical Medicine at Baylor College of Medicine. Ebola was considered a “neglected disease,” Hotez said, and was viewed as a low priority.

Then came the Ebola outbreak in West Africa from 2014 to 2016, which killed more than 11,000 people. Cases also arose in the United States. No longer could the disease be considered a terrifying condition that had relatively limited impact. For the first time, Ebola killed on a massive scale. “It changed the way we thought

Governments and philanthropic organizations around the world were forced to recognize the devastation that Ebola had unleashed. Those entities sped up development of the vaccine, Hotez said, so it could be used at the end of the outbreak. Officials administered the vaccine to people in close contact with the infected and they also gave it to those known to be in contact with the contacts through a method called the ring technique. More than 4,000 at-risk people received the vaccine.

“I remember telling reporters, when this was used at the end of the big outbreak, ‘if it saves one person’s life, it was worth it,’” Geisbert recalled.

The vaccine performed better than that: Not one person who received it contracted Ebola. But those numbers were bittersweet. On one hand, they proved that the vaccine was extremely effective. On the other, Hotez said, the outcome suggested “11,000 people died who didn’t have to die.”

The success of the vaccine at the end of that outbreak gave officials the confidence to use rVSV-ZEBOV— at this point licensed to drugmaker Merck—at the onset of this spring’s outbreak in the Democratic Republic of the Congo. McCormick, of UTHealth, said as long as health officials figure out how to maintain ample stocks of the vaccine and get it to rural areas, it might prevent something like the West Africa outbreak from ever happening again.

In late June, WHO officials said the current Ebola outbreak appeared to have stopped, though it would take until the end of July to officially confirm. Peter Salama, M.D., WHO deputy director general for emergency preparedness and response, told Stat News that he believes the vaccination effort helped contain the outbreak.

Geisbert’s role in developing the vaccine is his third brush with Ebola-related fame. In 1989, he discovered the Reston virus, a species of Ebola, in monkeys that had been imported to a laboratory in the Washington, D.C. suburbs. The discovery set off a minor panic, given the lab’s proximity to the nation’s capital. The incident was chronicled in the Richard Preston bestseller, The Hot Zone. Geisbert snapped the photo of the virus that appears on the book cover.

His expertise was crucial again in 2014 when a Liberian man in Dallas was diagnosed with Ebola, as were medical personnel who treated him. “I was on the phone with [then- Texas Governor] Rick Perry every other day,” Geisbert said.

But as Geisbert reflects on his years of work in dangerous conditions, he’s hopeful.

“What we do in the BSL4 [Biosafety Level 4] is dangerous,” Geisbert said, referring to the type of lab where he works, which houses the world’s most deadly, incurable diseases. “My wife runs my lab.

The people in the lab are some of my closest friends. You’re used to putting people you care about in harm’s way.”

When he’s in the lab, he often thinks about people in Africa and elsewhere who could be saved by his work.

“They can’t help that that’s where they were born or that they’re in this setting,” Geisbert said. “You realize that could be your brother, your son, your wife.”