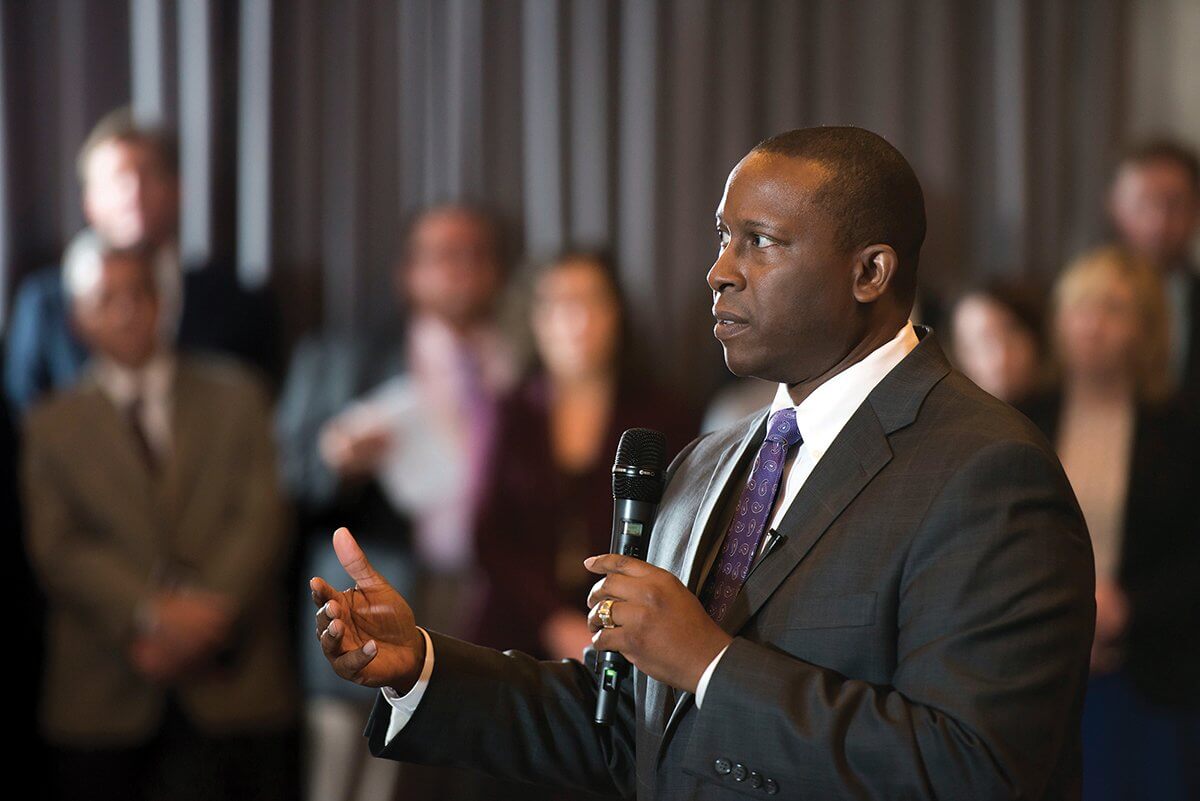 For nearly two years, CHARLES SMITH has overseen the Texas Health and Human Services Commission, the newest organization to become a member of the Texas Medical Center (TMC). This budding partnership coincides with a TMC land gift for the first public psychiatric hospital to be built in Harris County in more than 30 years. Smith, a native Texan raised in the Panhandle town of Childress, spoke with Pulse about teamwork, treating people with dignity and presiding over a massive reorganization of the commission, which is responsible for the state’s Medicaid programs, food subsidy payments and child care licensing.

Q | You’ve earned a reputation as a state agency transformation specialist. How did your rural upbringing influence your leadership style?
A | My father was a preacher. My mother was a stay-at-home mom and there were eight children. I am No. 5. Growing up, we went fishing and played with friends. We had the proverbial ‘when the street lights came on, we came back home.’ I didn’t realize we were poor until I went to college. … My grandmother worked as a house cleaner for many of the families in Childress and had a farming background. One of the things she would say was: ‘Make a hand’—like a hired hand—‘and whatever you do, do your best.’ That was really ingrained in me. My dad would help people and he instilled in us the value of helping people who are less fortunate. … My dad always told me that your name and your reputation should be protected. If you do anything, do it to the best of your ability—the first time.

Q | You graduated from Texas Tech University in 1988 with a bachelor’s degree in psychology, but didn’t start your college education there. Why did you transfer?
A | When I left high school, I went to East Texas State University [now Texas A&M University- Commerce] and played college football for a couple of years. I met a girl between my freshman and sophomore years living in Childress. We struck up a relationship. I went back to college, played one more year of football, dropped football and transferred to Texas Tech [in Lubbock] because she graduated from high school and went to Lubbock Christian University. It worked out. We’ve been married for almost 29 years.

Q | You previously ran the child support division at the Texas Attorney General’s Office. How did you get your first opportunity to work in state government?
A | I started at the child support division because I was planning to go to law school. I had an uncle who said if I really wanted to go to law school, I should do a volunteer stint at the Attorney General’s office. He knew some people in Lubbock who could make that happen. I started to volunteer 20 hours a week, which was kind of surprising to them. I was working in the legal area typing pleadings and doing interviews for paternity affidavits. They asked me if I would like to work there. After about six months of being with the agency, people were coming to me asking questions about the job. The manager asked me what I was doing that made people come to me and I said: ‘I took the manuals home and read them.’

Q | Did your own socio-economic background inform your work at the Attorney General’s office?
A | Growing up, I had friends who were in single-parent homes. Once I started dealing with paternity situations, I began to realize how their families struggled. We were all living in the projects—in subsidized housing. My family was eventually able to move out into a home my father bought. He was a disabled veteran. I stayed connected to my friends because they were a couple of blocks away. Through the job, I began to realize how difficult things were for them with their mothers trying to make ends meet. This became an opportunity to explain to staff why it was important for us to do a tremendously good job. It’s about collecting money and helping families so that children can have a brighter tomorrow.

Q | After managing child support offices in Midland, Abilene and the Dallas-Fort Worth region, you went to work in Austin. How did you make the leap from the Attorney General’s office to the Health and Human Services Commission?
A | After Greg Abbott became Attorney General in 2002, I was asked in October 2003 to come to state headquarters to become the assistant director of field operations. In May 2004, they created the position of deputy director of the child support division and put me there. I stayed in that role until the deputy attorney general retired in September 2013 and that was when Attorney General Abbott appointed me to executive deputy of the child support division. I initially came over to the commission in July 2015 as the chief deputy executive commissioner. Commissioner Chris Traylor retired in May 2016 and I was appointed by now-Governor Abbott.

Q | What professional challenges have you faced since you were appointed Executive Commissioner of the Health and Human Services Commission (HHSC) in June 2016, particularly regarding the agency’s reorganization?
A | The transformation of HHSC really was my sweet spot. At the Attorney General’s office, that was my reputation: Turning things around and fixing problems. I’m bringing a sense of clarity to HHSC so that people understand the mission. Health and Human Services has really been focusing on outcomes. We have almost 700 programs and more than 35,000 employees. I have changed the human resources policy to make it more aligned with a high-performing agency. We had employees who hadn’t had evaluations for years. Coming to work and doing your job and doing it without mistakes is what you’re paid to do. It’s not meritorious; it’s what we expect. For those who go above and beyond expectations, we can look to reward them with merit increases. The more effective and efficient we can be as a team … the more people we’re going to help.

Q | How are you prepared to be effective without a health background?
A | People say, ‘You don’t really understand. You’re not a medical doctor. You’re not a lawyer. How do you know health?’ I know that if our job is to improve people’s health, then we have to begin to monitor and understand health outcomes. Let’s make sure our contracts are leading to better health outcomes. We spend billions of dollars every year with our managed care organizations taking care of 4.5 million lives through Medicaid, CHIP and our waiver programs. How can I incentivize a person diagnosed with diabetes who is headed toward blindness, amputations and dialysis—all of those things that, in the Medicaid program, drive up costs for taxpayers? If I can get you to make diet and lifestyle changes and I can get the managed care organizations focused on that, then those are better outcomes for the patients and their families.

Q | How would a Texan receiving services through your agency identify the changes you are implementing?
A | We’re going to treat everyone who comes through the door with dignity and respect. We have terminated people for rude and discourteous behavior to internal customers as well as external customers because we are going to have civility. People come to us for help and they don’t need to be judged. That’s going to be one easily seen aspect. We are working with our managed care organizations and holding them accountable. I expect the health care that is prescribed by health professionals to be delivered. I believe that will be easily seen by those who are a part of our health care system.

Q | Both of your children have followed your footsteps to college and to state government, is that correct?
A | My son Chris is 27. He graduated from the Texas Tech business school. Alyssa graduated from Texas Tech. They both work for the Office of the Governor. Our son is a budget analyst in the budget shop. My daughter is in the criminal justice division as a grants coordinator. She turns 26 in May.

Q | The HHSC will build a new, 200-bed psychiatric hospital next to the UTHealth Harris County Psychiatric Center, augmenting the state’s mental health services. What is the value of the commission’s new partnership with UTHealth and the Texas Medical Center?
A | We have an opportunity, by increasing the number of beds, to look at the full continuum of care. We’ll have inpatient and respite and step- down care on one campus, which is something that we don’t have. It’s an opportunity for Houston to be a model for the rest of the state—and even for the country—as we begin to attack the growing mental health needs in our state. We can also help drive down costs and improve the lives of individuals and families because we are going to be able to provide services to people before they enter the criminal justice system.

Charles Smith was interviewed by Pulse assistant editor Cindy George. The conversation was edited for clarity and length.