Two years after a horrific bicycle accident, Adessa Ellis is rebuilding her body 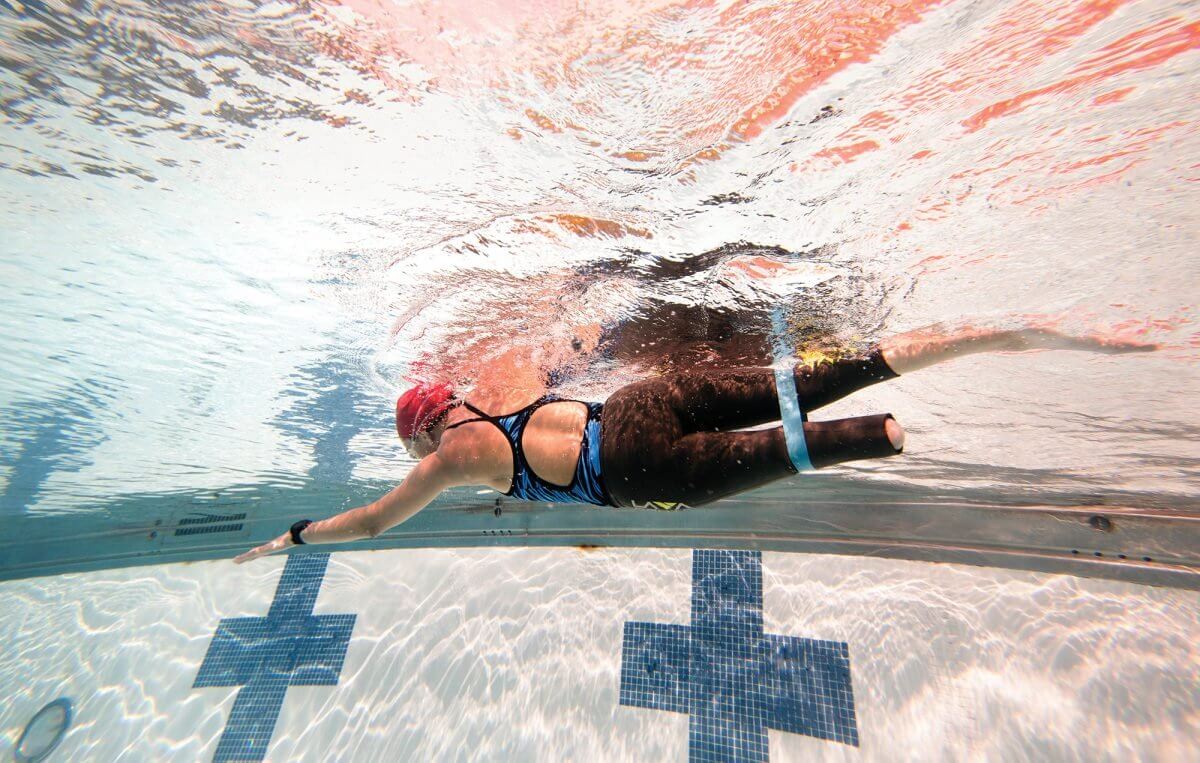 On Feb. 20, 2016, Adessa Ellis was cycling along Highway 90 in Fort Bend County when a drunk driver in a black Jaguar hit her from behind. She flew 25 feet into the air and landed in muddy, stagnant water. As she lay there, her major organs started to fail and a deep puncture in her lower back opened her body to infection. By the time paramedics arrived, Ellis was all but dead.

She was taken by Life Flight to the Memorial Hermann Red Duke Trauma Institute, where surgeons performed an extremely risky procedure called an open thoracotomy, making a large incision in her chest wall to gain access to her heart, lungs and other organs. It was her only shot at survival, and it worked.

But Ellis was broken. In addition to the trauma to her heart, she suffered a lacerated liver, collapsed lungs, traumatic brain injury and severe nerve damage. She shattered bones in her ribs, hip, pelvis and both legs. Her teeth had been knocked out, and infections ravaged her body. She endured surgery after surgery at Memorial Hermann, then transferred to TIRR Memorial Hermann and then Kindred Hospital Houston Medical Center for rehabilitation.

On Oct. 12, eight months after the accident, physicians amputated her left leg below the knee—a decision made, in part, because it provided a more straightforward path to recovery and would allow Ellis, a triathlete, to return to running, swimming and cycling.

Half joking, Ellis asked her surgeons to give her the “runner’s cut.” She later learned that they had performed a specialized reconstructive surgery— known as the Ertl procedure—that left her with a stable limb that has the potential to bear the weight of a sports prosthetic.

A week after her amputation, Ellis was finally released from care. After arriving home, she promptly removed the hospital bed that had been arranged for her. That, she said, went against all of her plans.

One morning in late March, Ellis, now 40, prepared to work out in her Sugar Land, Texas, home. The furniture in her living room had been pushed aside to make room for exercise equipment—a handcycle, stationary bike, yoga mats and weights. Shelves of helmets, medals and other relics from competitions surrounded her, along with pictures of her two daughters, now 17 and 20, and statues of crosses and angels. Cheers from ‘The Price Is Right’ game show emanated from a television turned low.

Ellis wore a cycling jersey and bike shorts, her curly hair, air-dried, fell just past her shoulders. It had taken her two hours just to get out of bed that morning because of how stiff her joints and muscles had grown during the night. She compared herself to the Tin Man from The Wizard of Oz who needed oiling in order to move. Two hours—and yet she does it, every day.

Ellis has undergone 56 surgeries since the accident. Metal rods, screws and plates are fixed throughout her body to help keep her skeletal system intact, and she is still grappling with the effects of her traumatic brain injury and spinal cord damage, as well as a partial paralysis along the right side of her body. Two years later, and it still feels numb.

“I had hoped to be running by now,” Ellis said, speaking slowly and deliberately. “But I’m still hobbling. If it was just the leg, I’d be going. But it’s the brain injury, it’s the right side of my body. That’s what’s causing all my problems.”

Before the accident, Ellis, who is 5 feet 5 inches tall, weighed a fit 165 pounds. By the time she was finally discharged from the hospital, her once-muscular body had atrophied to just 85 pounds. She was not projected to live, much less walk, but she has pushed herself past all expectations.

“They told me I couldn’t do certain things and I would go and do them,” Ellis recalled. “I said I wanted walking crutches and they told me I wasn’t ready for them. So I got online and ordered some and walked into my next therapy session. They were shocked.”

That tolerance for suffering, that grit, is something Ellis has always had— and it likely saved her life.

“What has really impressed me with Adessa is this nonstop perseverance in knowing what she wants and figuring out how to get it,” said Danielle H. Melton, M.D., director of the Amputee and Orthotics and Prosthetics Program at TIRR Memorial Hermann Hospital. “She has really surprised everybody in her recovery.”

At age five Ellis enrolled in taekwondo despite her mother’s insistence on gymnastics—she’d always been a fighter, and although she was teased mercilessly for it, karate school was her escape. She eventually achieved second-degree black belt before she quit at 15 to move to New York to live with her dad.

After finishing school, she got a job as a UPS driver and worked there for 22 years, hopping in and out of the truck and jogging back and forth between businesses and homes. She loved it. Her friends in the dark brown uniforms still honk when they drive by her house.

“I had a long ponytail and people would stare at me all the time. They acted like they’d never seen a girl driving for UPS,” she said proudly. “I was just used to it, so I’m used to it when people stare at me now.”

Ellis has always pushed her body to its limits. She has competed in six Ironman triathlons—a 2.4-mile swim, 112-mile bike-ride, and 26.2-mile run—and never shied away from a physical challenge. If it’s true that God doesn’t give you something you can’t handle, then Ellis is living, breathing proof. 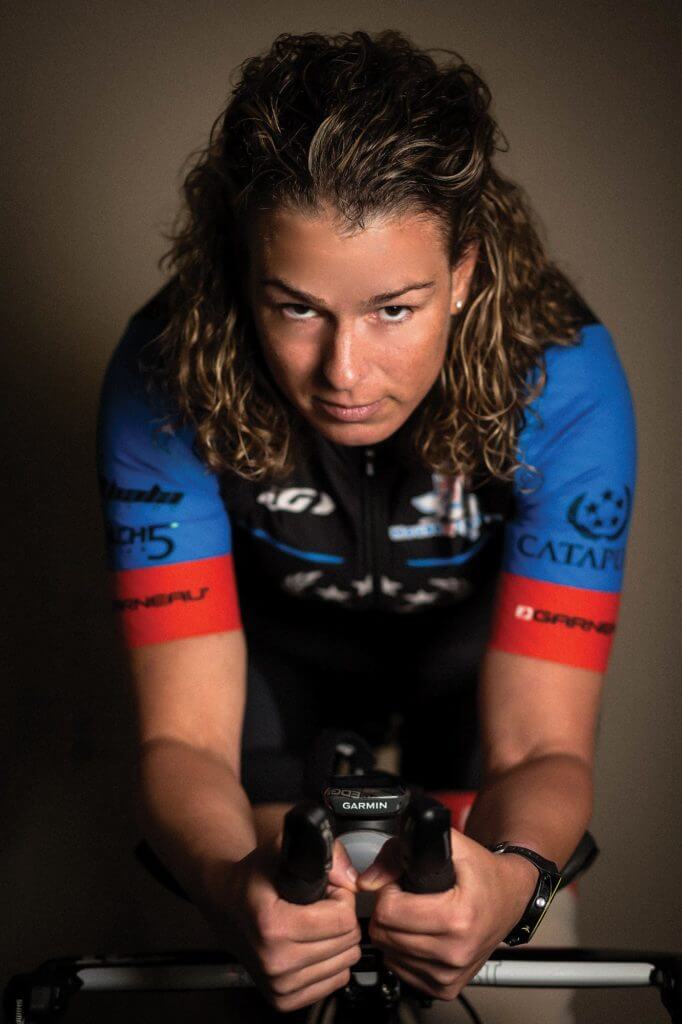 Adessa Ellis trains on her stationary bike in her living room.

Ellis is now up to 127 pounds, a feat she has managed by swimming or cycling daily. In January, she completed the Chevron Houston Marathon on her handcycle—a three-wheeled cycle propelled by her arms—and she is gunning to run the 5K next year.

But it won’t be easy.

Ellis still walks primarily with forearm crutches, and the paralysis throughout her right side is a daily frustration. She has no health insurance at the moment because her long-term disability and COBRA coverage have expired, so she is waiting for Medicaid to kick in. Last she heard, it would be August until she could afford to resume therapy.

She is a member of Team Catapult, a local nonprofit that supports individuals with disabilities who want to compete in endurance sports. The nonprofit has offered to fund a prosthetic running blade, but Melton and her team are concerned that Ellis’ body may not be ready.

“It’s a balancing act for me because I have to make sure she’s safe and in the right setting, but I also want to make sure she has the equipment that’s going to allow her to do what she wants to do,” Melton said.

Of course, Ellis isn’t taking “no” for an answer. She recently recorded a short video of herself running with a prosthetic blade—a quick, unsteady jog, her forearm crutches tossed just out of the frame.

“Now I’ve got evidence,” Ellis said. “They say I’m not ready and to focus on how far I’ve come, but in my mind, I can go further.”

It’s a phrase Ellis often repeats, but don’t mistake it for resignation.

“My recovery is going well—in some areas, better than expected, while in others, not fast enough,” she said. “But when someone is told they’ll never walk again, and within a couple of years they’re learning to walk unassisted and attempting to jog, it’s amazing. I could easily give up and sit in my wheelchair. I have a long way to go, but I do not intend to stop trying.”

Ellis’ doctors have grown accustomed to her indefatigable resolve.

“I don’t know that I’ve ever seen somebody so motivated as she is to accomplish what she wants to accomplish,” Melton said. “And I have no doubt she’s going to get there.”

The drunk driver who hit Ellis eventually pleaded guilty. In a move that shocked even those closest to her, Ellis has forgiven him.

“It is what it is,” she said. She steadied herself and stood up, her eyes fixed on the bike stationed in the living room.

“I needed to move on. I don’t have any resentment; it was an accident. He drank and he drove. We’ve all been young. He was 25 years old. A lot of people are mad, but what are you going to do? Sit here and harp?”’

That’s not her style.

“The laws aren’t that strict for running somebody over,” Ellis added. “If I would have died, it would have been a different story.”

She paused. “I did die four times, actually. I just survived.”

Ellis walked to the back door of her home and gazed onto the street. She longed to be out there, her body running in a brand new way, racing forward. 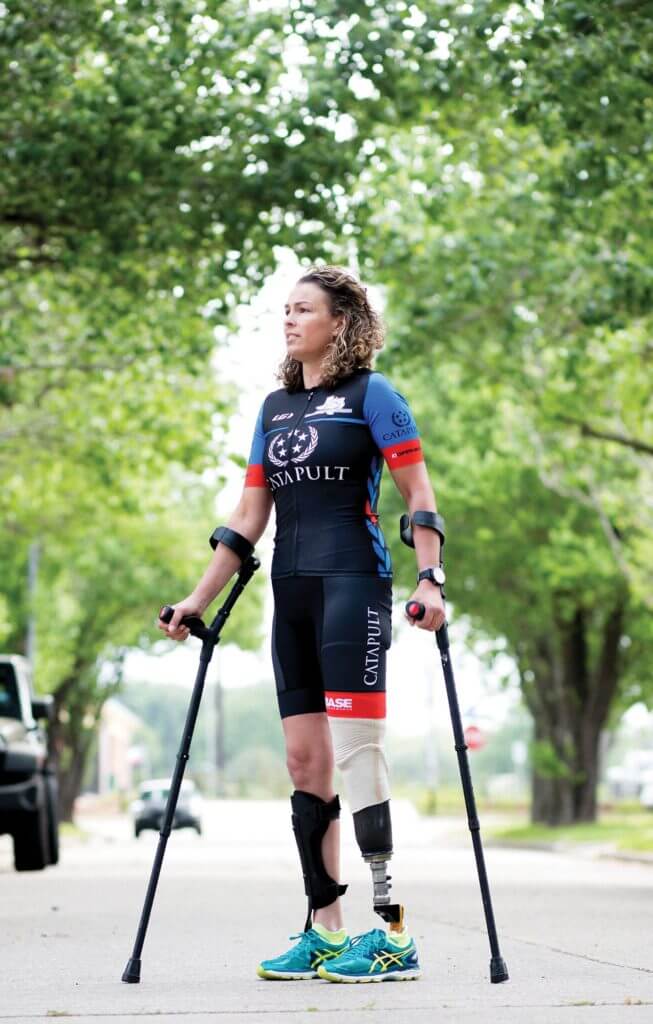